A new report from PwC suggests mandated MVNO access in Canada would delay the deployment of 5G across the country.

The report was released by the Canadian Wireless Telecommunications Association (CWTA), which represents companies that provide wireless products and services before all levels of government in Canada.

“Our assessment concludes that new regulation mandating wholesale access for MVNOs could lower the financial ability and incentive of MNOs to make the substantial investment required to build 5G networks, and that this could result in deferred and curtailed 5G rollout across Canada,” the report reads.

Mobile virtual network operators (MVNOs) are providers that don’t have an established network, and instead rent access to existing networks.

This comes as the Canadian Radio-television and Telecommunications Commission (CTRC) is considering whether MVNOs should have mandated access to wireless service providers’ networks.

The report compares the 3G-to-4G transition in Europe to those in other regions and identifies key factors that contributed to the delay in 4G adoption. It notes that mandated MVNO access slowed network adoption during the transition across countries in Europe.

“Should regulation mandating wholesale MVNO access be introduced in Canada, a similar story should be expected to play out during the upcoming 5G transition,” the report reads.

“We estimate that effective 5G coverage—the share of population that receives 5G coverage with sufficient quality to realize economically beneficial use cases—would by 2030 be reduced from 95 percent with no regulation to 75 percent with regulation.” 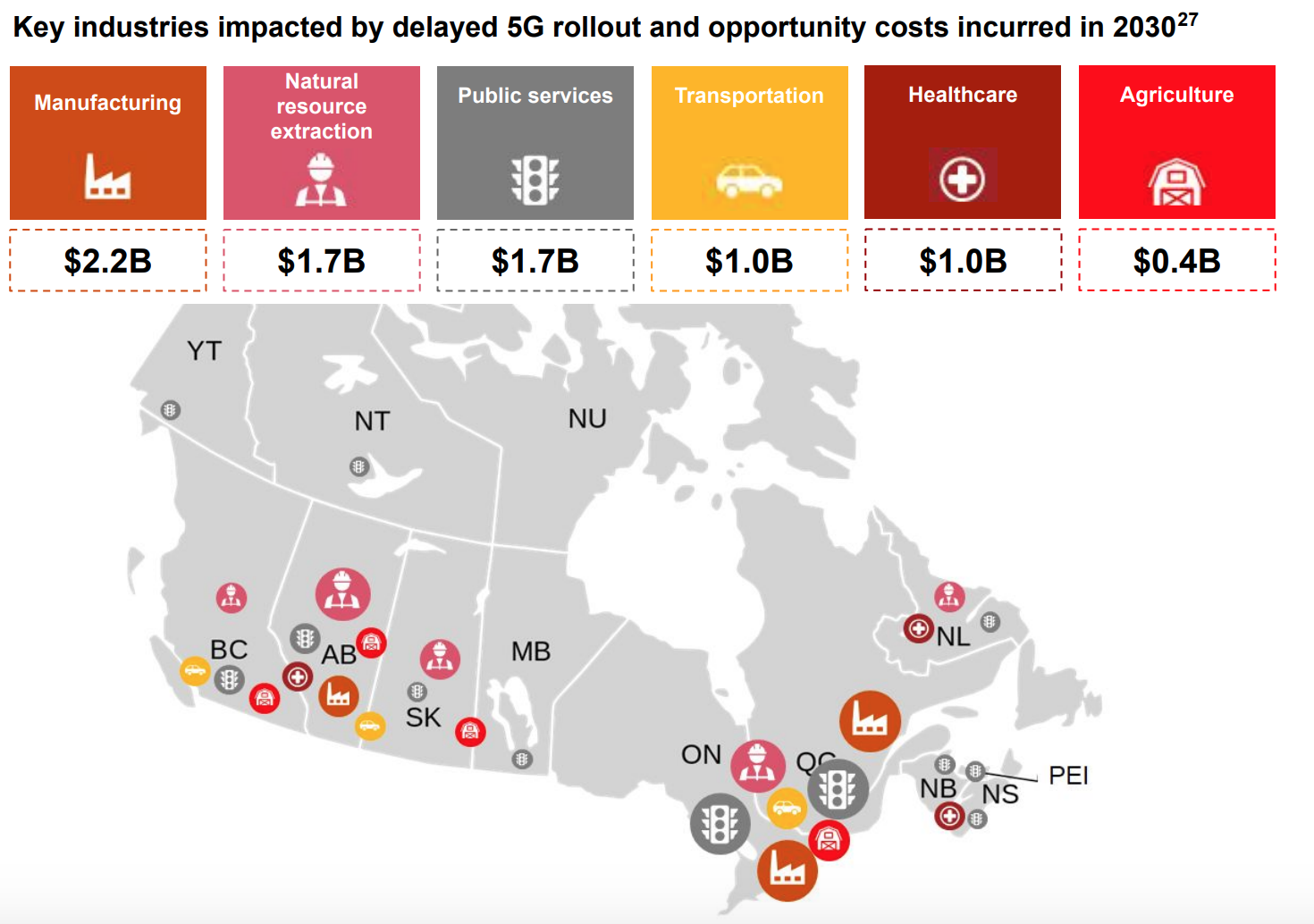 As a result, the report says important use cases would be impacted, and Canada could forgo several expected socioeconomic benefits of 5G over the next decade. Further, it notes that these effects would likely widen the digital divide between urban and rural Canadians.

PwC suggests that by delaying 5G use cases, the deferral and curtailment of 5G deployment in Canada carries a significant opportunity cost.

“We estimate that in the coming decade, Canada could incur a cumulative loss of at least $57 billion in GDP, with manufacturing, natural resources, and public administration sectors being most impacted,” the report notes.

It claims the Canadian economy’s competitiveness could lag behind global peers, and that Canada’s high tech sector may be impacted and slow Canadian innovation.

“This report suggests that the introduction of regulation mandating wholesale MVNO access could have the unintended consequence of hurting Canada’s 5G future, and the economic benefits expected from it.”

The report concludes a two-part study by PwC. The first part of the study concluded that mandating wholesale MVNO access to reduce consumer wireless prices will lead to an unhealthy Canadian telecom industry.

The conclusion of this study comes as Canadian carriers recently submitted their final comments to the CRTC for its review on the state mobile wireless services.

Rogers, Bell, Telus and Shaw Communications reiterated their stance against mandated MVNO access, saying it would have negative consequences on the industry, while smaller carriers like TekSavvy and Distributel argued the current landscape of the mobile wireless market in Canada does not meet the needs of consumers.