Sonos Move Hands-on: Music that moves with you

Sonos is taking its great audio quality outside of your home 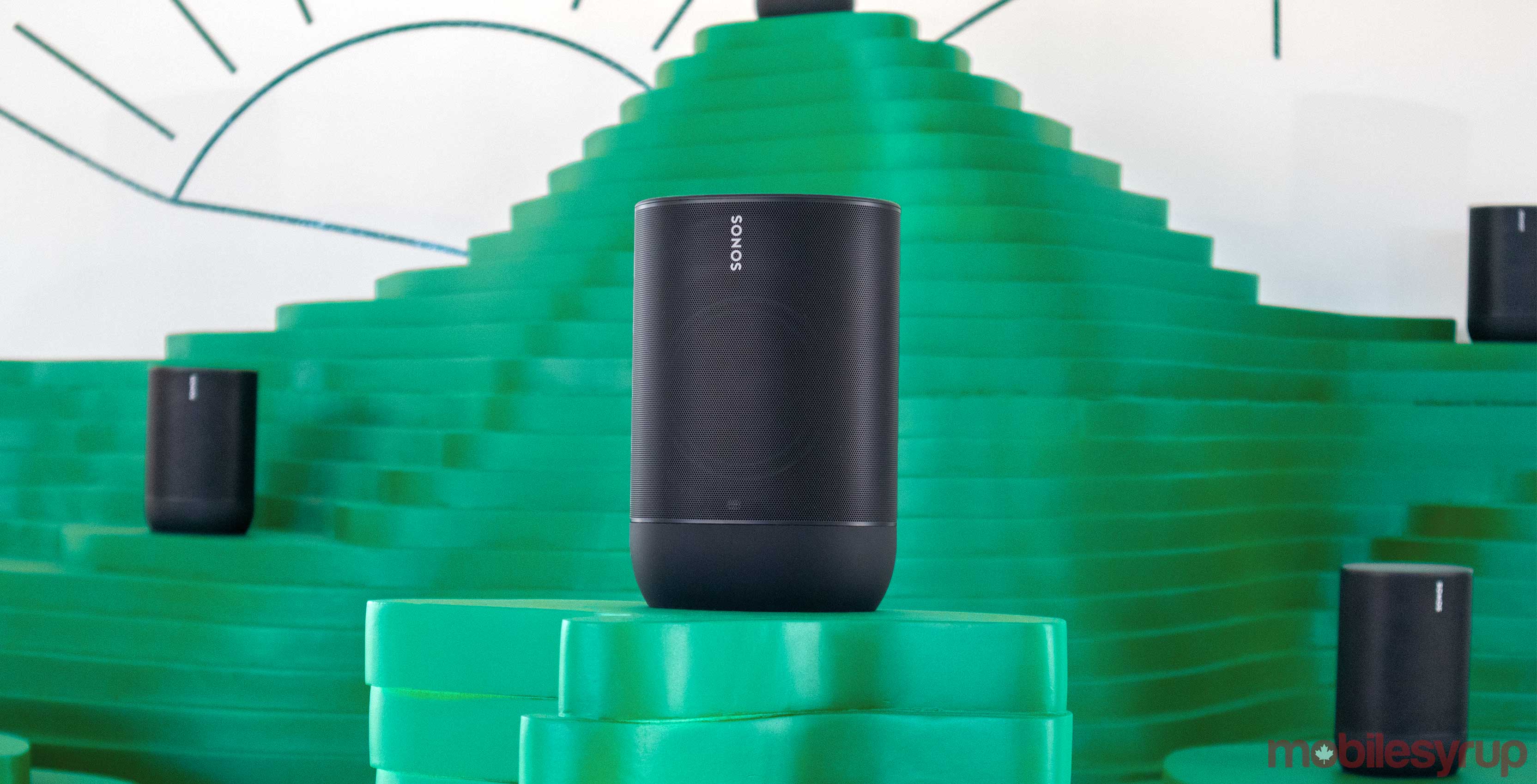 Sonos, the audio device company that’s known for its high-end Wi-Fi speakers, is about to drop a new product. The new speaker, called the Move, it’s large, sounds exceptional and is packed to the brim with features, including for the first time a battery and Bluetooth connectivity.

The Move takes the best of what Sonos has done for years and adds portability, allowing users to take it outside of the home for the first time.

At the event at Milk Studios in New York City the company also showed off two product refreshes. A new Sonos One called the SL and a new Sonos Connect called the Port.

Before I get into the Move and why it’s an essential and long overdue product for the company, it’s important to explain how Sonos views the speakers in its lineup.

Sonos is moving beyond your home 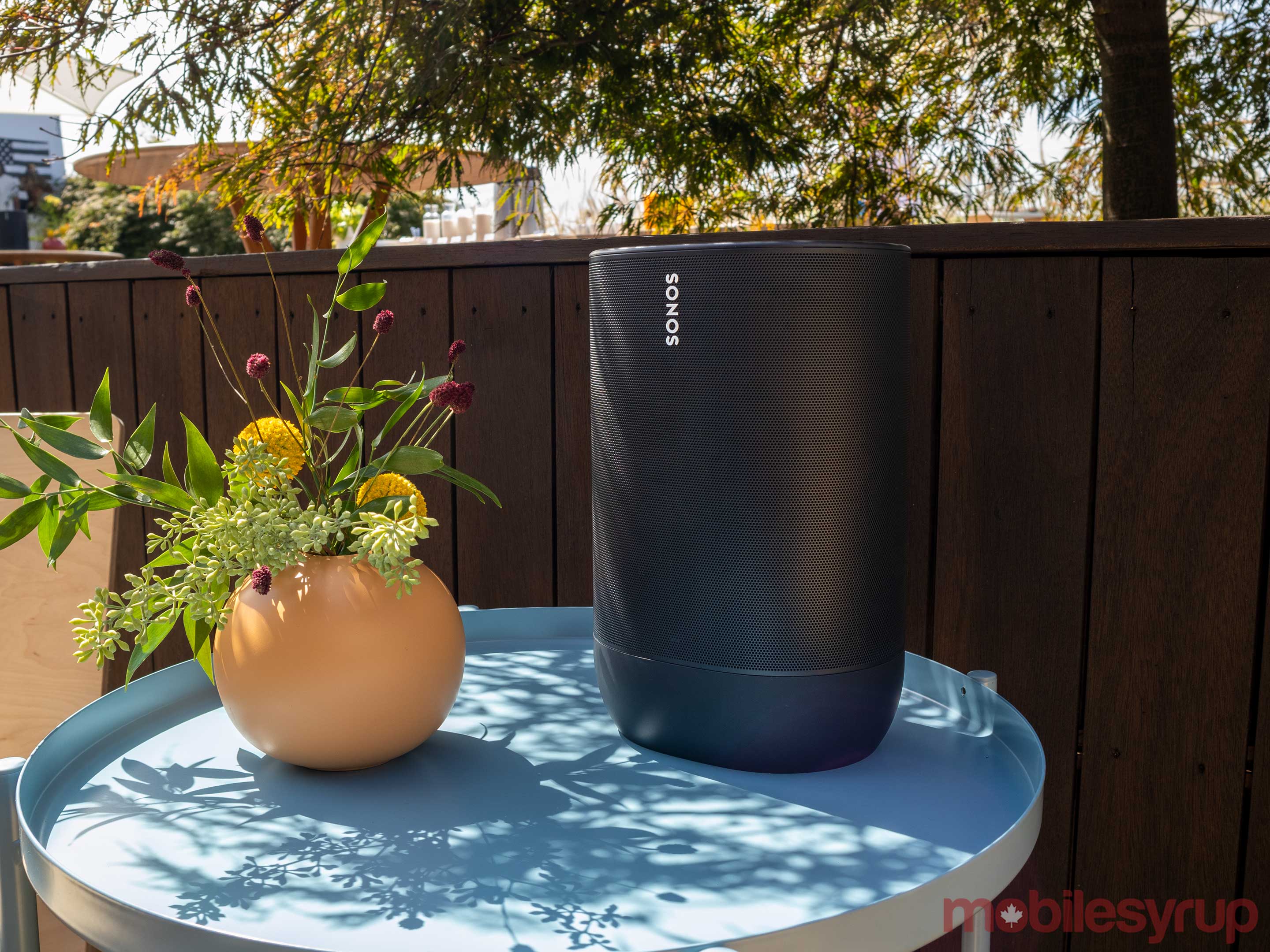 The company’s lineup until now has primarily only featured Wi-Fi-connected speakers and home theatre systems designed to be statically placed in your home.

Sonos designed the new speaker to move with the listener, allowing users to bring it with them to the kitchen, patio, beach or anywhere they want to lug the 3kg (6.6lb) speaker.

To make this happen, Sonos first did extensive testing in a variety of outdoor environments and came to the conclusion that the speaker required significant power so its sound didn’t dissipate into the open air.

To provide a more powerful sound, the Move packs two class-D digital amplifiers, one downward-facing tweeter to send audio out in an ultra-wide pattern, and finally a single mid-woofer to balance out the tweeters.

Beyond more sound, the company also knew that if it was taking the speaker outside and away from a Wi-Fi network, it needed to add Bluetooth, more durable hardware and a built-in battery. The Move’s battery is even removable so you can replace it once it stops holding its 10-hour charge. Sonos says the speaker’s battery should last a few years before it starts to deplete.

This is something that meant a lot to Quebec-born Antoine Leblond, Sonos’ vice president of software, who told me that roughly 93 percent of the speakers the company has sold are still in use. Keeping the Move around as long as its current speakers was one of the Sonos’ key goals.

During production, issues appeared when the team tested taking the speaker out of a home network as well when bringing it back home again. This and other similar hurdles took a lot of work to make the speaker work as seamlessly as it does, mentioned Leblond.

Even having the speaker turn on and off was something the software team had to overcome. One interesting thing that Leblond mentioned was that if the Move is in sleep mode it can still be turned on by the Sonos app. This enables it to be controlled like a regular Sonos speaker whenever it’s on Wi-Fi.

Sonos also made the speaker should be able to handle drops and it’s IP56 water and dustproof.

Software might be the key to the Move’s brilliance

Once the company had its outdoor bearings, it needed to find a way for the Move to sound perfectly tuned in any scenario, indoors or out.

This is when Sonos developed my favourite Move feature — Automatic Trueplay.

This feature is the natural extension of Sonos’ existing Trueplay technology, which was the brainchild of legendary music producer Rick Rubin.

Trueplay launched four years ago alongside the Sonos Play 5. The feature allows users to tune speakers easily to a specific environment. Users walk around with an iOS device and the phone listens to a variety of Trueplay test tones emitting from the speaker. The speaker is then tuned based on the results.

Sonos knew it would have to overcome this lengthy manual approach if the Move was going to be able to travel.

The new Automatic version uses the manual data sets that Sonos collected by using the old Trueplay to train a machine learning algorithm.

This means that every 30-seconds or so the speaker listens to itself and adapts its sound profile. If moved, the speaker then adapts to provide the user the best audio experience it can. During the hands-on event, the team moved the device from a table into a cubby and the speaker adapted admirably to the smaller space.

The process is also all performed locally on the speaker so it’s not collecting data and feeding it back to Sonos.

The only downside is that it doesn’t work on Bluetooth yet, so you can’t tune the speaker out of Wi-Fi range. Ideally, Automatic Trueplay will work with Bluetooth in a future update.

While Automatic Trueplay is arguably the Move’s most significant new feature, it’s far from the only upgrade Sonos packed into its portable speaker.

The usual tricks are here too 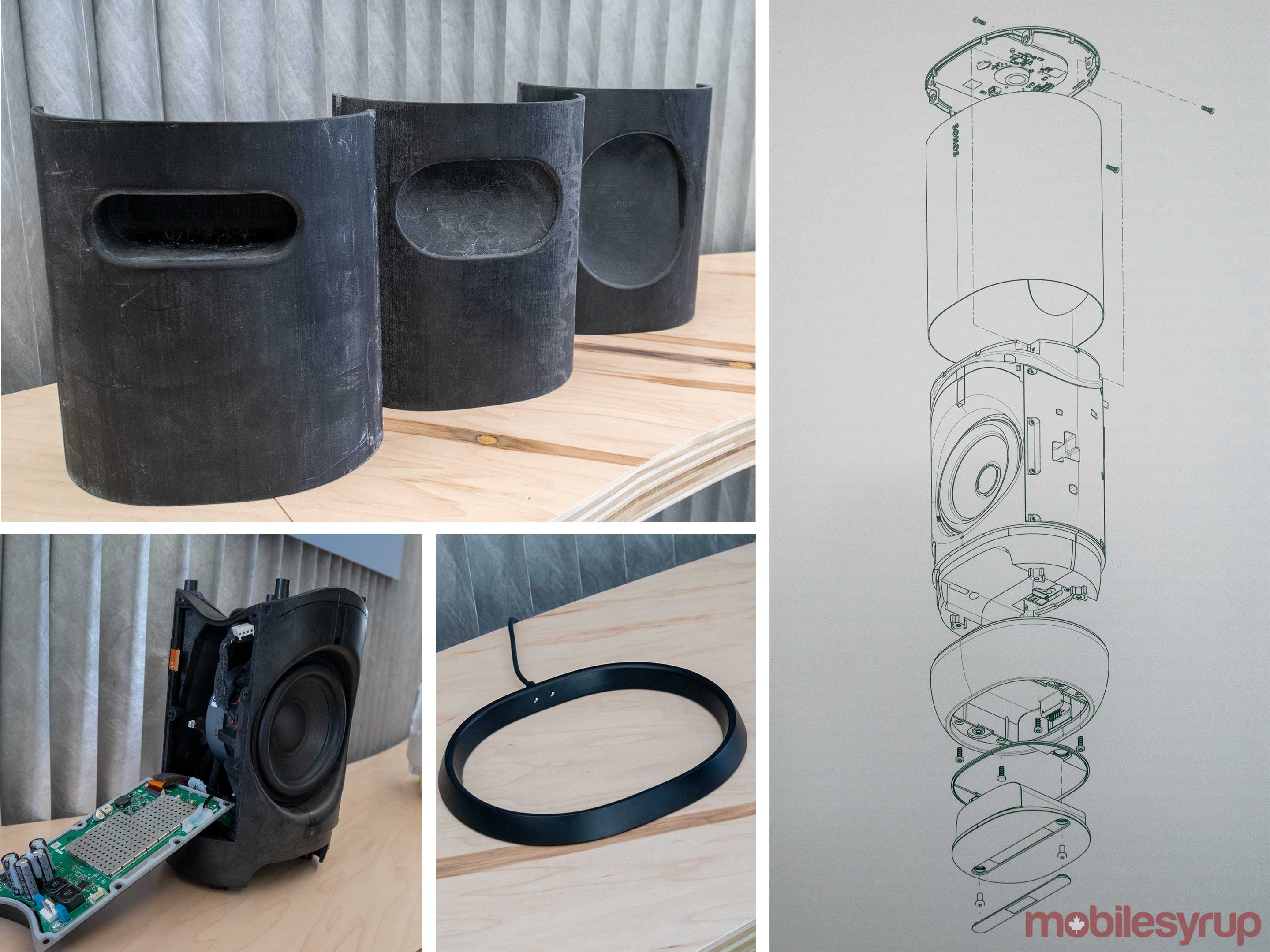 Beyond all of the speaker’s tough exterior and high-quality sound output, there are still a few small tricks up the Move’s sleeve. It features four far-field microphones allowing it to work with either Google Assistant or Amazon’s Alexa.

The portable speaker also supports Apple’s AirPlay 2, allowing it to connect to even more devices. Beyond this, the Move is also Bluetooth capable, with the feature being turned on and off by a little switch on the back of the speaker.

The Move also comes with a charging cradle dock. This makes it easy for the speaker to integrate into a Sonos home audio system. If you don’t have the Move’s dock you can also charge it with USB-C.

On the top of the Move there are three capacitive buttons. Two are for skipping forward or backwards through songs or for volume controls, as well as a single play/pause button. On the back is where Sonos hid the previously mentioned Bluetooth or Wi-Fi audio toggle, the power button and another button for linking the Move to other Sonos speakers. 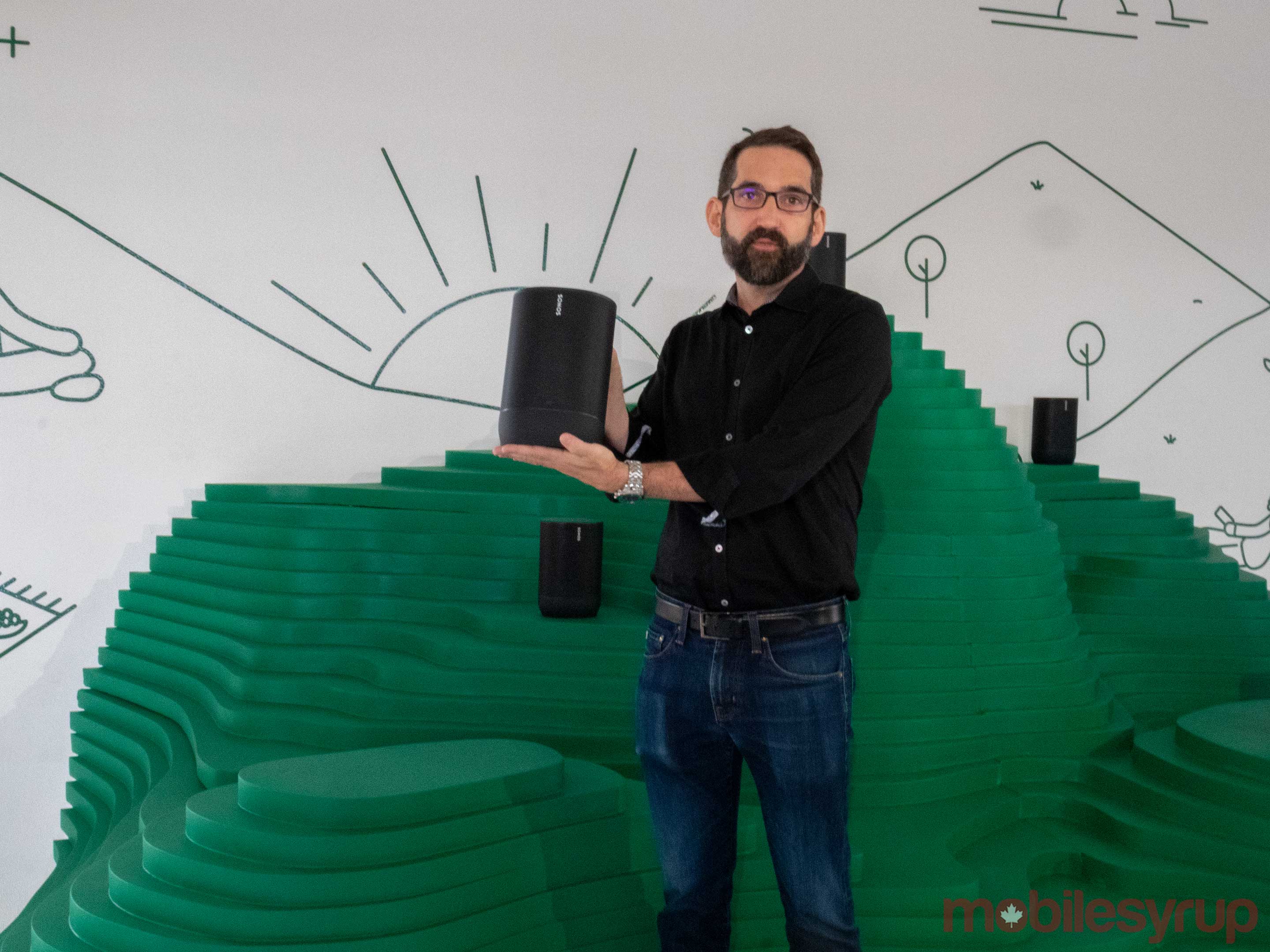 Overall, the speaker is an impressive entry from Sonos into the portable speaker market. Its booming sound, strong design and robust set of features make it a worthwhile speaker if you’re willing to spend $500 CAD.

While it will be worth comparing the Move to Bose’s take on the portable high-end speaker, its integration with the Sonos network makes it a really appealing buy for anyone with a few Sonos speakers already.

The Move is set to retail for $499 in Canada and you can pre-order it today. It will be on shelves later this month on September 24th.