Microsoft’s vision for the future of web browsing: Edge on Chromium 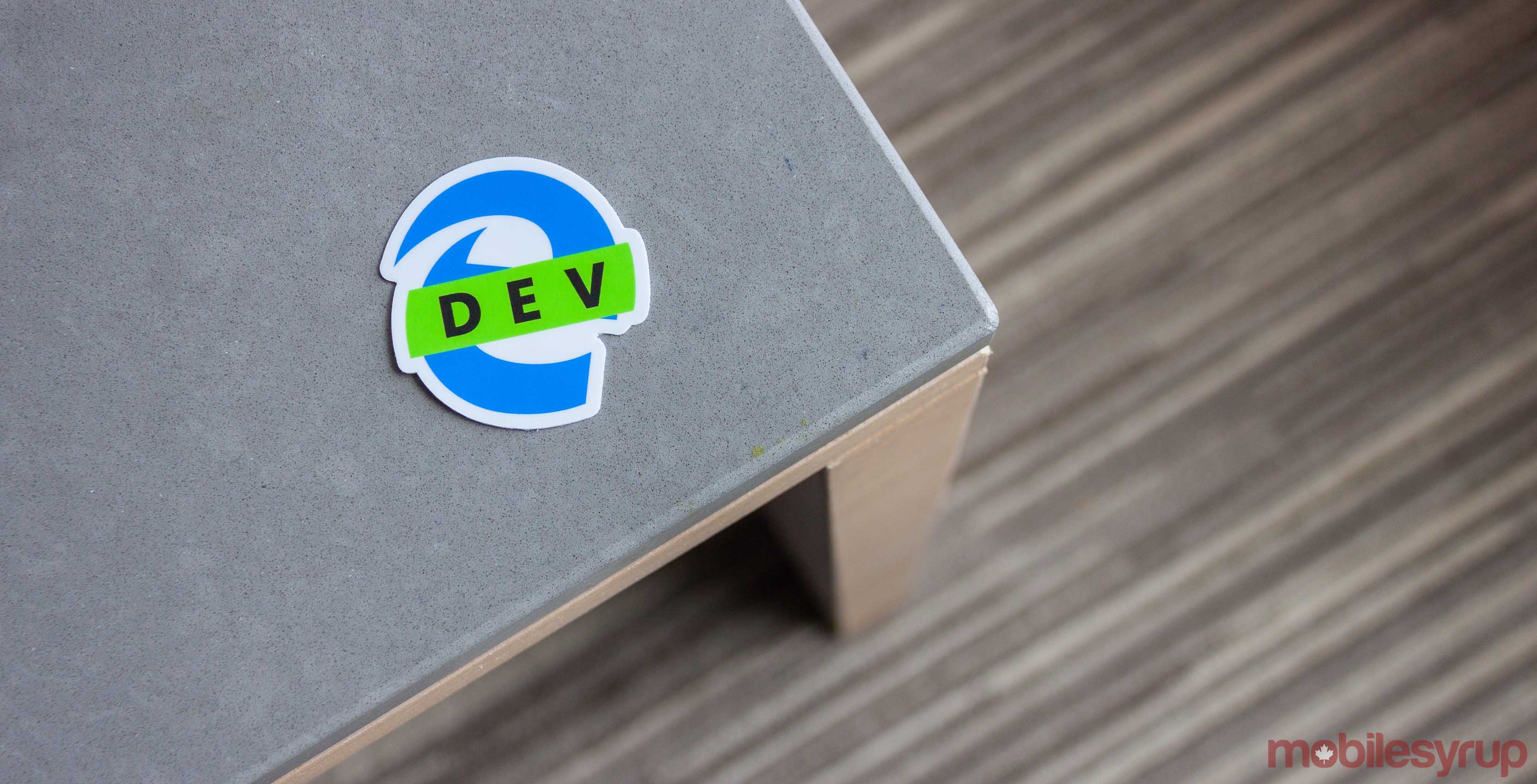 If you browse the internet today, chances are you aren’t using a browser from the company behind Windows.

That wasn’t always the case. For a while, Microsoft’s Internet Explorer (IE) was the king of web browsers. In some ways, it still is. Businesses rely on IE for legacy apps. After it fell out of popularity — and modernity — IE became a tool for companies that preferred to keep using the tools that worked for them.

In 2015, Microsoft tried to reclaim its title as the king with its completely new Edge browser. Over the next four years, Edge would improve drastically, boasting better power and resource management alongside a host of unique features for Windows users. From inking, to ‘Set Aside,’ which let users save groups of tabs to come back to later, Edge was full of great stuff.

Unfortunately, the browser misstepped with both consumers and businesses. It didn’t offer enough to draw consumers away from popular alternatives like Firefox and the new titan of browsers, Google Chrome. Nor did Edge offer the legacy solution businesses relied on in IE.

Now, Microsoft is trying again. And the early signs are promising.

Chromium-based Edge, a browser for everyone

The new Edge has been available for some time as a developer preview. If you haven’t tried it out, I’d recommend it because Edge is excellent. However, Edge so far has felt like Chrome, but with the Google stripped out.

While that isn’t necessarily a bad thing, that is about to change.

At Build 2019 in Seattle, Washington, Microsoft unveiled several new features coming to Edge on Chromium — or as some Microsoft people like to call it, ‘Credge.’

Many of these new features bring Microsoft flair back to Edge, while also improving that already solid foundation. First up, the Redmond, Washington-based tech giant is making Edge a true browser for all in two major ways.

The first way is in availability. Credge will be on everything; macOS, Android, iOS and several versions of Windows. While there will be some limitations — Edge on iOS will still use WebKit as per Apple restrictions — the goal here is consistency. According to Edge personnel on the show floor at Build, the team is planning to update the mobile versions of Edge to match the new Chromium-based desktop app in terms of visuals and feel. It’s also worth noting that Edge on Android is already Chromium-based.

The second major feature is the new IE mode for Edge. Enterprise users will be able to open legacy, IE-reliant apps in a Credge tab. This is huge, as it finally brings IE into a modern container while also unifying the experience across a single browser. 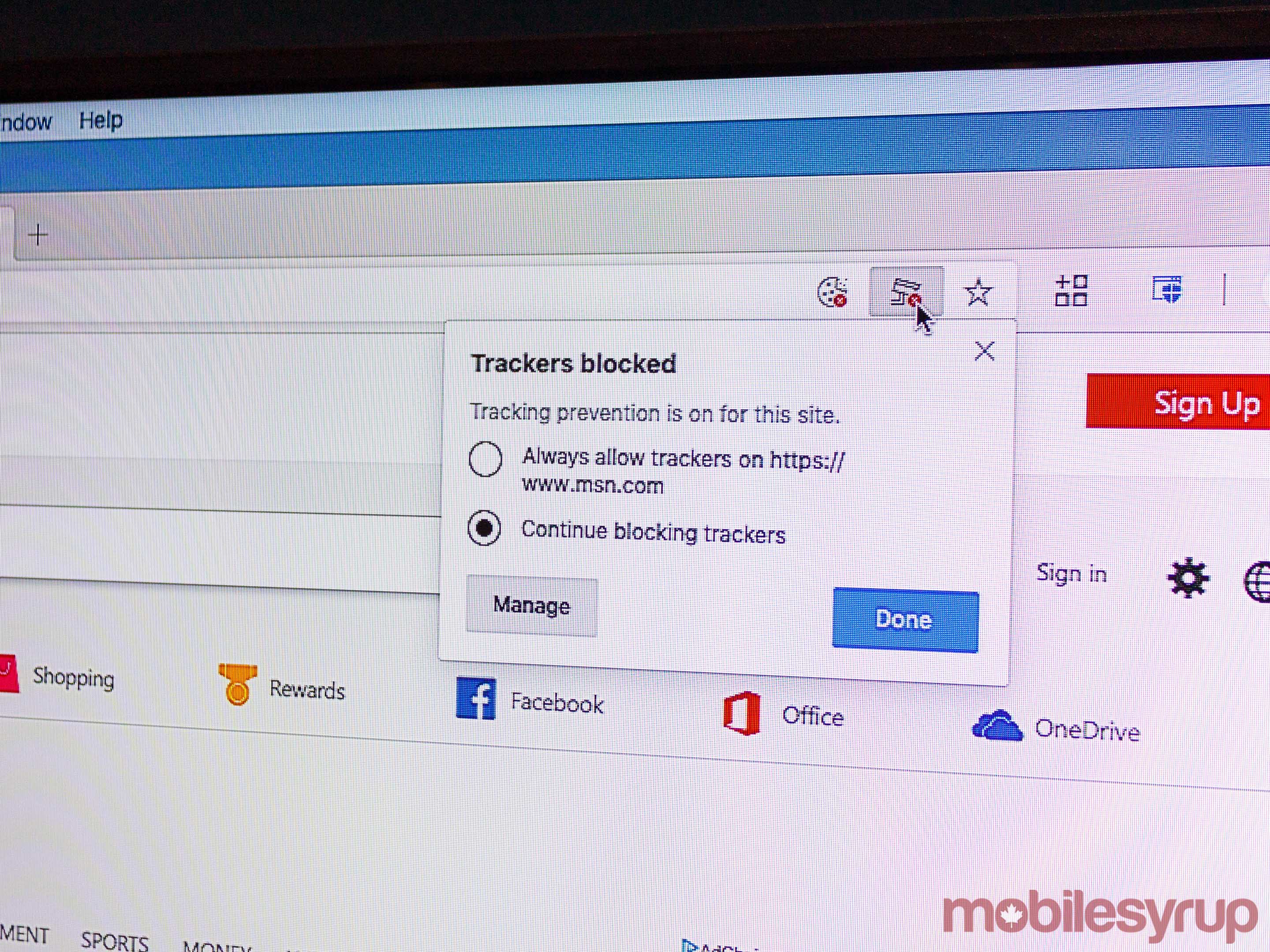 An early version of tracker blocking in Edge

As someone who bounces around different browsers a lot, I’ve come to learn a few things. For example, Firefox offers excellent privacy settings for users who would rather not be tracked. Unfortunately, these settings can break some parts of the web.

Worse, Firefox has some compatibility issues. In my experience, these are few and far between, but they still exist. Chrome is the popular browser, so web developers tend to prioritize it when testing. Sometimes, non-Chromium browsers, like Firefox and Edge, get left behind.

On the flip side, Chrome and Chromium-based browsers tend to work with everything but don’t offer great privacy options. Chrome is especially bad with this.

Chromium Edge hopes to fill that middle ground. IE mode solves compatibility issues with legacy apps while the Chromium base does the same for the modern web.

On the privacy front, one of the new features announced at Build is multi-level privacy options. Credge will soon offer users three tiers of privacy: ‘Basic,’ which lets most trackers have free reign, ‘Balanced,’ which keeps the malicious trackers out and ‘Restricted,’ which really clamps down on all trackers.

However, the Edge development team wants these features to work without causing users grief. In other words, the team is putting in extra effort to ensure turning on privacy settings won’t break things.

Right now, Restricted may break some websites, but Balanced — the recommended setting — shouldn’t.

A Fluent future and Collections 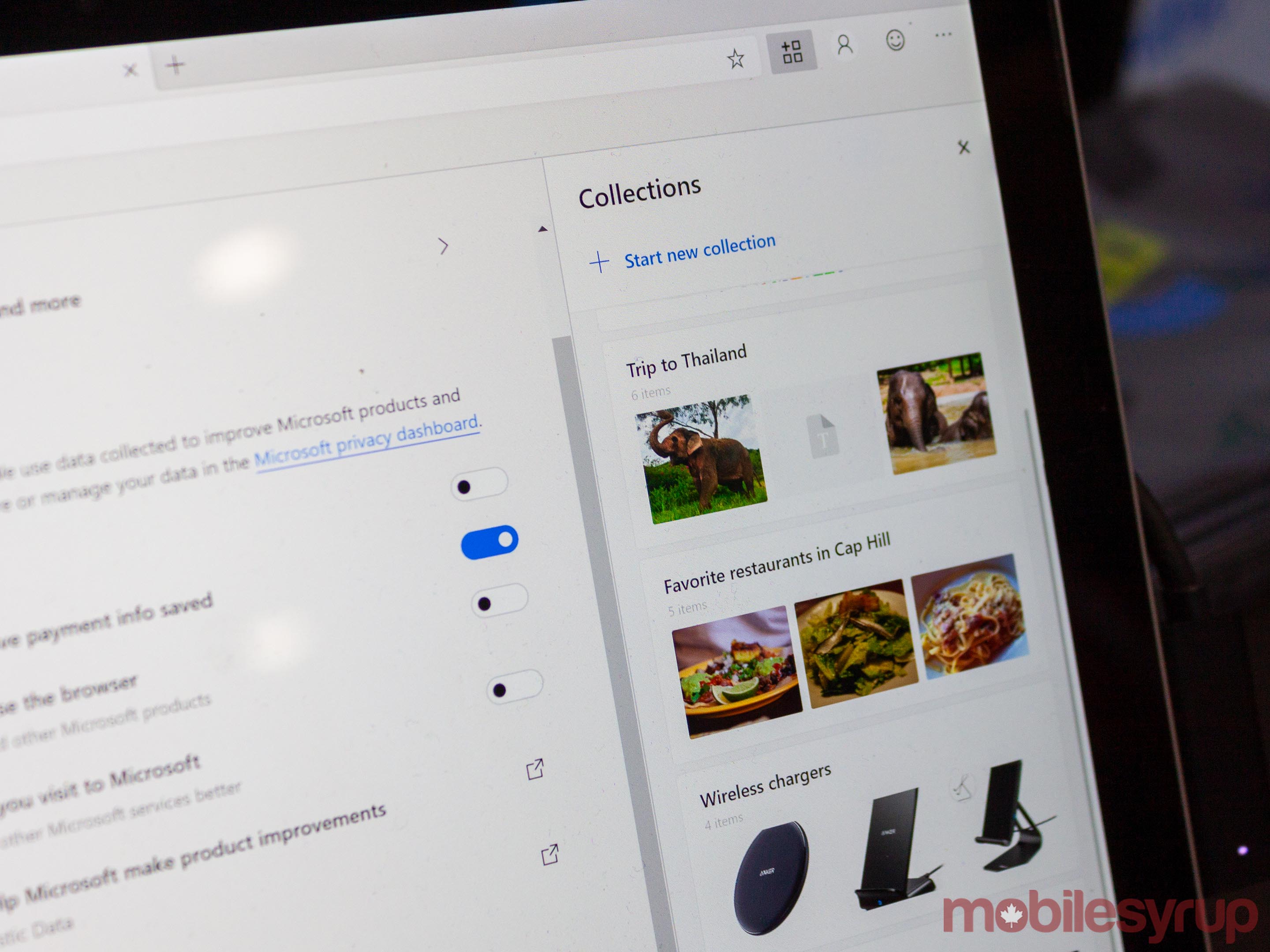 I spent some time at the Edge booth on the Build show floor, where several product managers were answering questions and demoing the new features in Edge. Two of the product managers (PM) — and fellow Canadians — Scott Low and Candace Poon alluded to plans with Edge, such as incorporating Microsoft’s Fluent design into the browser.

“That’s in the future,” Poon said. “We’re focussed on the foundation now.”

Along with bringing the visuals in line with Microsoft’s design vision, the PMs spoke to Credge’s feature set. The development team keeps a list of old Edge and new Edge features and thinks a lot about what to bring over. The developers are already integrating or planning to incorporate features like improved touch support and inking. Other features, like Set Aside, may not make a return.

“We’re asked about that a lot,” Poon told me. “We’re thinking about it.”

As much as I’d like to see Set Aside make a return, Credge offers the Edge team opportunities to expand and improve on old ideas. The new Collections feature introduced at Build 2019, for example, could cover the same needs at Set Aside but in a unique new way.

The internet offers a lot of information and resources, but condensing it and saving it can be a challenge. Microsoft is trying to solve this with Collections. Essentially, Collections is a side panel in Edge where users can drag and drop web content.

Researching cameras in preparation for purchasing a new one? Create a Camera Collection and then fill it with information — snippets from reviews of different models, pictures, stores where you can make the purchase and more.

Plus, you can easily export from Collections into Office apps like Word. When you do, Collections automatically adds the source of the content to your document. Whether you’re an average person, a student or a business user, Collections is a promising new feature to help save parts of the web.

You can make Edge better 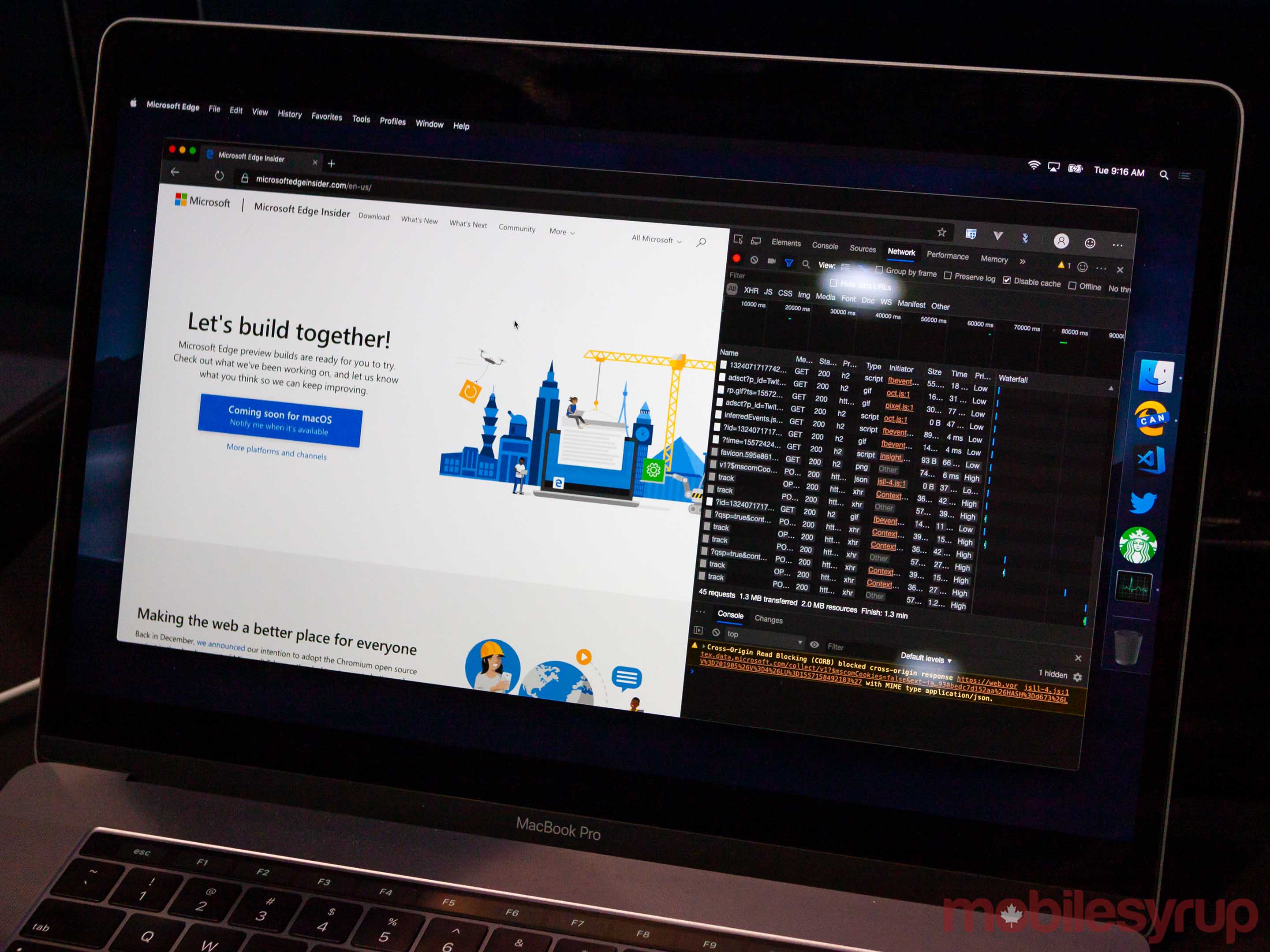 Microsoft is trying to achieve a lot with Edge. It’s a platform for corporations relying on both modern and legacy apps, it’s privacy focussed, it’s set to be the new ‘default’ in Windows and the company is building it in Google’s house. But out of that challenge, Edge is shaping into a promising new browser.

However, there are still a lot of questions and doubts around the browser. Will it do enough to convince consumers to ditch Chrome? Will businesses get on board? By adopting Chromium, has Microsoft doomed non-Chrome browsers like Firefox? Can Microsoft achieve its vision for the future of Edge?

When I first heard the rumours of Edge built on Chromium, I was skeptical. Now, it looks like Microsoft is on the right path, and if it keeps on that path, Edge could be the Chrome we always wanted.

But to make that happen, Microsoft also needs your input. Since the launch of its preview, Credge has sported a small smiley face in the top right-hand corner of the browser. Clicking it opens a window to send feedback directly to the team.

“We take user feedback seriously,” Poon said. She urges users to send feedback so the team can make the browser that people want.