It looks like someday a Canadian will walk on the Moon 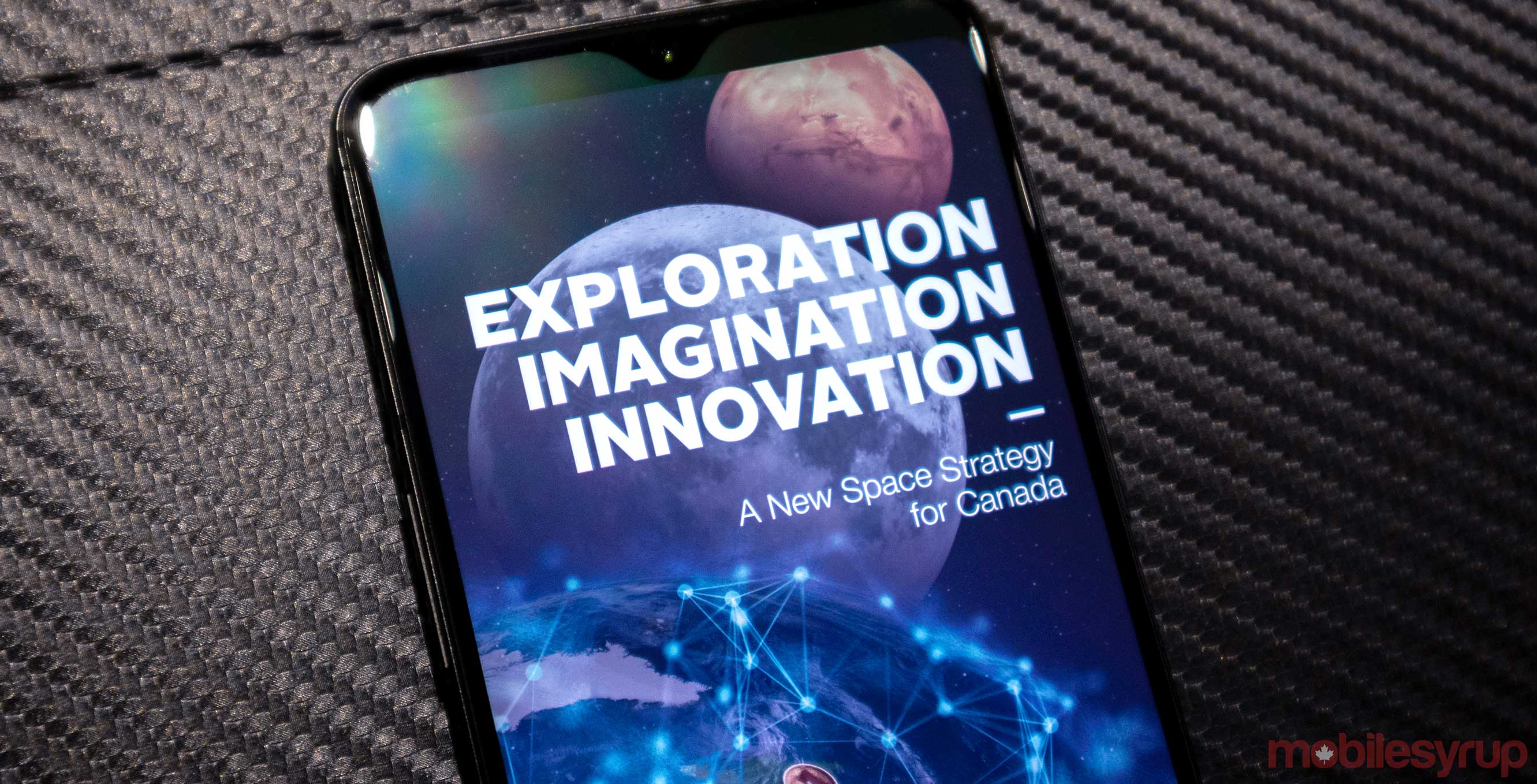 The Government of Canada has unveiled a new space strategy that looks to develop the country’s space program, add jobs and benefit all Canadians through space-related technologies.

Estimates state the global space economy will triple in size to $1.1 trillion USD ($1.4 trillion CAD) over the next 20 years. In his opening remarks, Bains said, “this shift means that space will play a central role in the new digital economy, and in developing and supporting emerging technologies.”

Canada’s space sector currently contributes $2.3 billion to the country’s gross domestic product and employs over 10,000 Canadians. As Canada gears up for the predicted space boom these numbers are expected to grow.

Canada’s vision for space is to become a “leader in exploration, science and innovation and deliver the socio-economic benefits to all Canadians,” states the strategy.

Outlined below are the five aspects that the strategy plans to accomplish.

Canada’s first action under this new strategy is to join the U.S.-led Lunar Gateway mission to create a laboratory in the Moon’s orbit to facilitate exploration of the Moon. This will pave the way for the first Canadian visit to the surface of the Moon.

The station is set to be a testing facility for new technologies, a stopover for astronauts on their way to the Moon, mission control for Moon mission and someday a stepping stone on the way to Mars.

The strategy details how Canada will leverage its leading positions in artificial intelligence (AI) and its heritage with the Canadarm to build a next-generation AI-enabled deep-space robotics system. To maintain its status as a leader in AI-enabled space robotics the country is investing $1.9 billion CAD into the project.

As it stands right now, the idea is to build both a large and small arm that are connected, allowing the system to walk end-over-end around the Lunar Gateway. It’s planned to be highly autonomous, meaning it will make “decisions and undertake operations without the presence of astronauts,” states the space strategy.

Beyond working on the robotic arms, Canada is enabling scientific opportunities and global partnerships relating to space science. The Canadian Government has already invested just shy of $4 billion CAD. While the government plans to build on this number, there’s no specific new investment mentioned in this section of the space strategy.

Since the Lunar Gateway will be outside of Earth’s magnetosphere, it allows Canadian scientists in space to experiment with astrophysics, heliophysics, solar-terrestrial interactions, solar storms and Earth observation (EO). Of course, the Gateway will provide scientists with the opportunity to learn more about the Moon as well.

Canada is aiming to learn about the Moon’s geology, geophysics, and prospecting by landing and controlling Canadian-made payloads on the lunar surface.

Finally, the strategy looks to solidify the future of Canda’s astronaut program to guarantee low Earth orbit flight opportunities and to lay the groundwork to send Canadians to the Moon for the first time.

Inspiring the next generation of spacefaring Canadians

Beyond participating in the lunar Gateway, Canada’s space strategy looks to get the next generations ready for the future of the Canadian space sector.

The Government plans to do this by launching a national contest called ‘Junior Astronauts’ that aims to excite and teach young Canadians about space and what it takes to become an astronaut in the Canadian Space Agency (CSA).

It plans to do this by placing a focus on STEM fields, physical fitness, teamwork and communication. Top participants may visit the CSA’s headquarters in St. Hubert Quebec to train with real astronauts and learn about the qualities they will need for future Moon missions, states the strategy.

Alongside this, the Government is investing in STEM activities like the PromoScience and CanCode to get Canada’s youth interesting in science fields like AI and big data.

The strategy also says that the CSA is encouraging firms to consider women and minorities for STEM positions related to the Lunar Gateway and the Lunar Exploration Accelerator Program to help promote diversity.

Using space to benefit All Canadians

Throughout 2018, Canada put $100 million CAD into the Strategic Innovation Fund to invest in low earth orbit (LEO) satellites that support broadband connectivity.  The plan behind these satellites is to connect more Canadians in rural and remote areas to create next-gen high-speed networks.

Canada is hoping to use the space strategy to improve health care and remote medicines through testing and experiments in space.

Ideally, Canada will learn new medical techniques regarding keeping astronauts healthy in space. As a result, people in remote communities can use these methods on Earth.

Another aspect of the strategy is to learn how to grow food in harsh northern environments to discover more about growing food in desolate places like deep space and the Moon.

Finally, this section touches on using space to monitor Canada’s landmass and secure its borders, as well as working with other global space leaders to promote peaceful exploration and use of space.

Since the space economy may grow to $1.1 trillion USD within 20 years, Canada wants to prepare for and take advantage of that growth to benefit Canadians. The Government will review its modern regulatory framework to make sure space-related activities keeps pace with emerging technologies and innovations.

Canada is also hoping to leverage space to expand on our international partnerships with NASA and the Europeans Space Agency.

To help Canadian space firms scale up, the Government is investing $150 million over five years to create the Lunar Exploration Accelerator Program (LEAP). The goal of this program is to develop technology that’s linked to Canada’s participation in the Lunar Gateway mission, as well as creating more space-related jobs.

Canada’s space strategy is ready to use its space-based assets to gather data on climate change, as well as launching a new collection of satellites with the RADARSAT Constellation mission that can provide almost real-time Earth observation data. This data is to help learn about climate change and possible security threats within the Canadian border.

Not only will Canada be looking down at itself from space, but it will also use this renewed space strategy to study how Earth interacts with the Sun and other questions relating to our solar system and universe. To do this, the Government is fixing how it selects science missions by being more in tune with the science community inside and outside of the country.

The Canadian Space Advisory Board informed the views and perspectives of the strategy. Its views were partially informed by a national public consultation to identify where the country should focus its efforts in space.