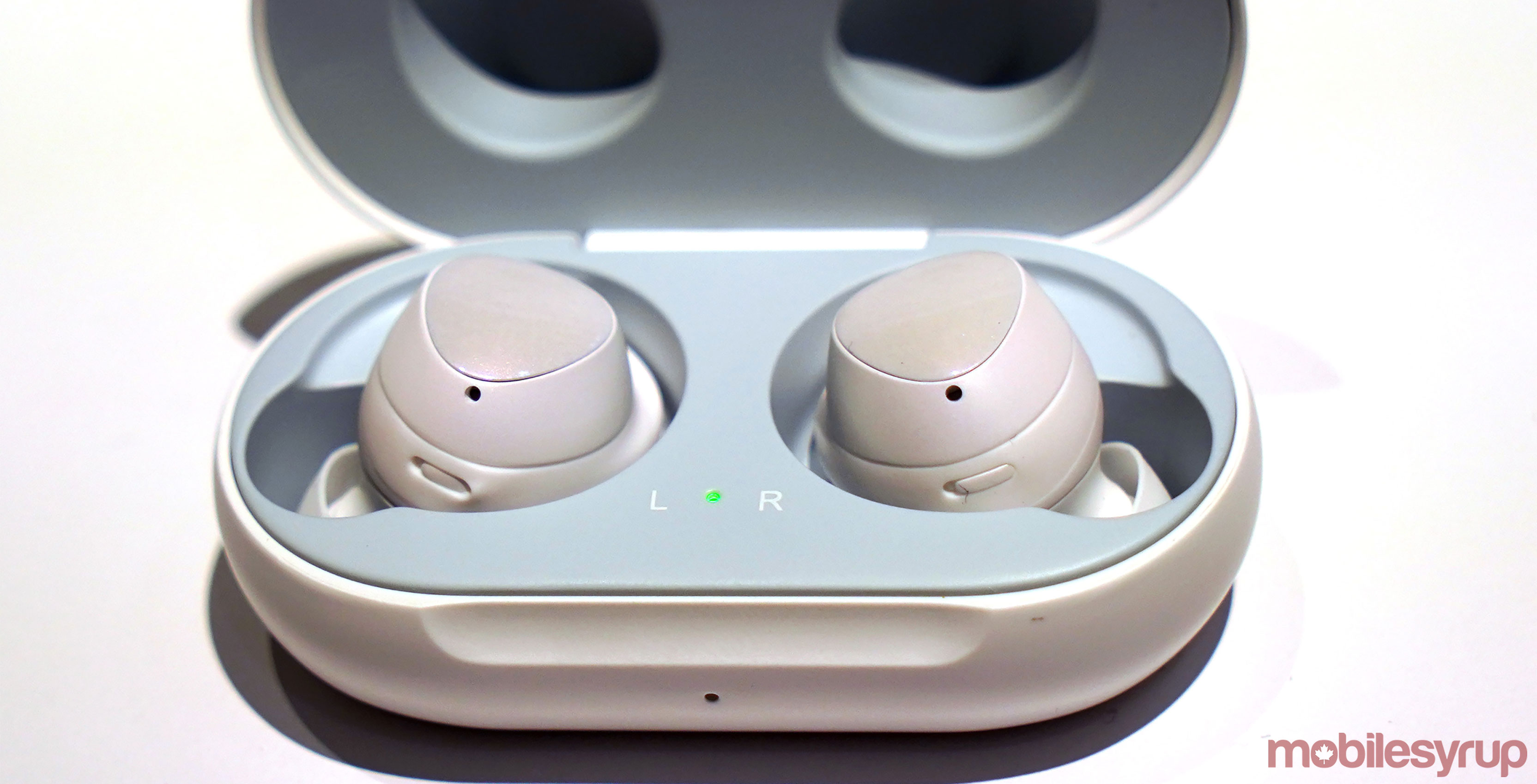 Sometimes, Samsung is like a boxer who doesn’t care how many punches they land; they just want that one haymaker to turn the tide.

The Galaxy Buds aren’t that dramatic a product, but they do further illustrate how relentless the company can be at neglecting past iterations to make room for more corrective successors.

I got my hands on a pair after Unpacked 2019 in San Francisco, and have been listening to varying content on them since.

Though I’ve only spent a short period with the Galaxy Buds, here are some first impressions of Samsung’s latest true wireless earbuds. 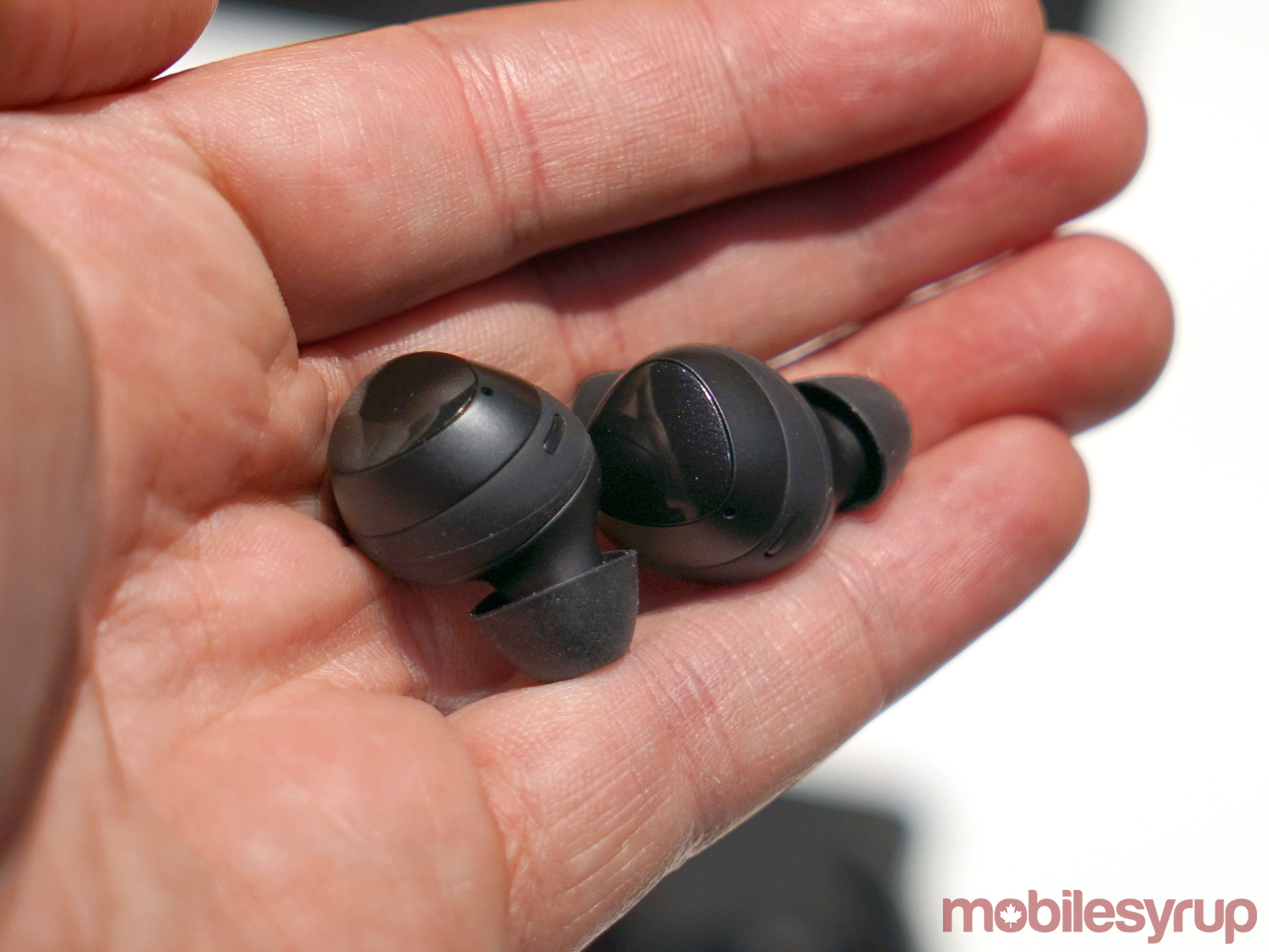 It’s probably not a big surprise that the Galaxy Buds resemble the Gear IconX earbuds that came before them. The pill-shaped case, the rounded form factor, their small stature — it’s undoubtedly an iterative update.

I had listened to those for countless hours, and though they were a noticeable improvement from the first IconX, there were still things missing. Here, the Galaxy Buds not only have a better name, but are also lighter weight, have a better fit and include wireless charging. The PowerShare wireless charging in the Galaxy S10/S10+ makes these earbuds an intriguing accessory to carry around.

They may not be entirely as nimble as Apple’s AirPods, but there isn’t a huge difference. Plus, Samsung has all but matched the convenient pairing process Apple is renowned for. I opened the case, the Galaxy S10+ recognized the earbuds through the Wearables app, and a tap later, they were paired; it all happened in seconds. Note this won’t necessarily work the same way on non-Samsung Android devices, so Apple may still have an edge there.

With visual aids to learn the ropes in using them, Samsung at least tries to get users running instead of crawling out of the gate. Even so, there is a learning curve here for those who’ve never used the company’s true wireless earbuds before. 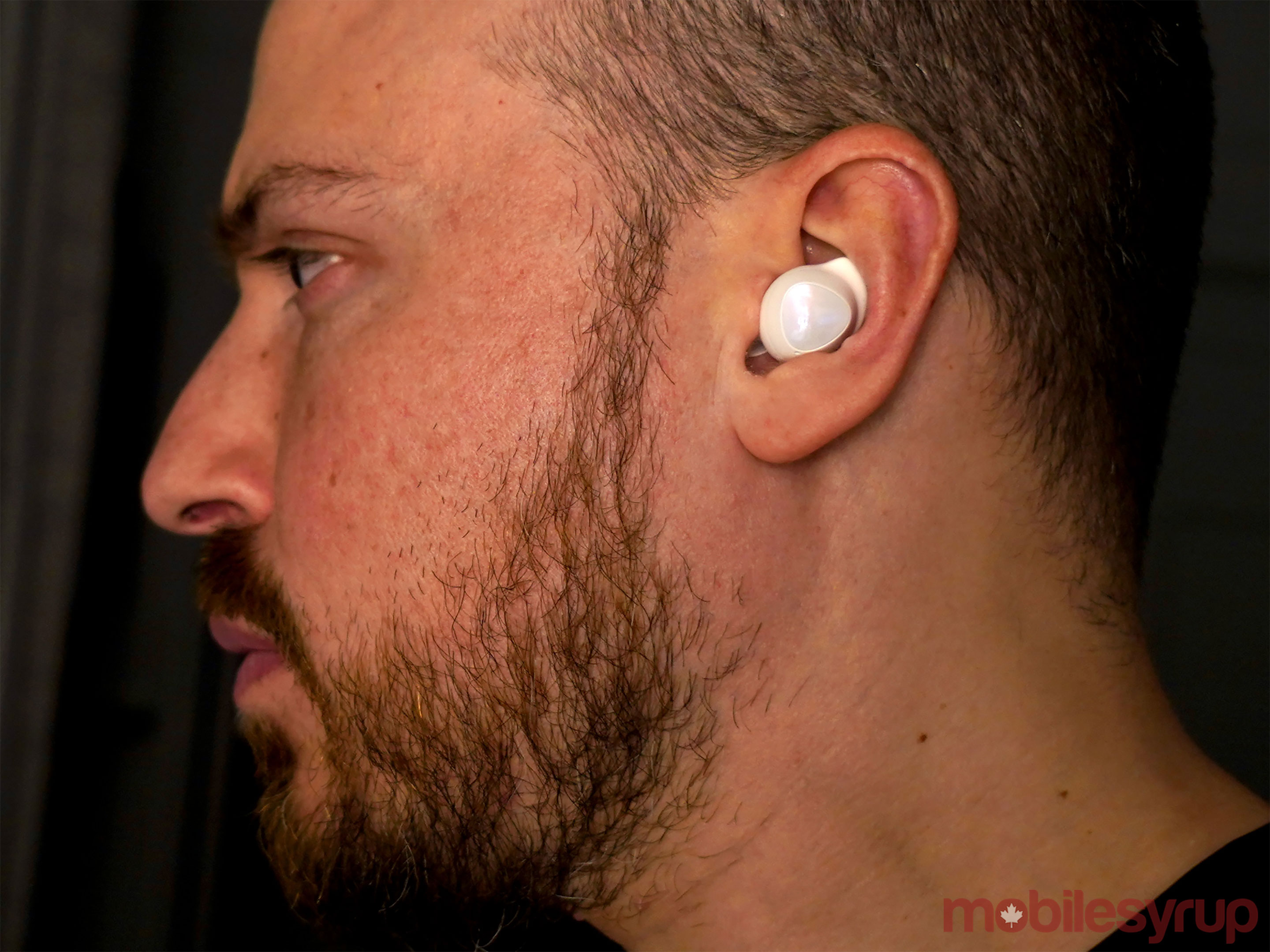 The fit is based on the best you can manage with the included pieces. There are three sets each of earbud tips and wingtips. Finding the most comfortable and efficient combination may take some experimentation.

Samsung didn’t go too in-depth in the included instructions inside the box. The Wearable app offers greater control over how and what the earbuds do. For example, the ambient mode needs to be turned on in the app first. The only recourse is to assign one of the earbuds to turn it on by holding a finger on it. That’s easy enough to do, but it requires navigating through the app a little to do it.

The default controls are pretty standard. A single tap plays/pauses. A double tap skips a track or answers/ends a call. Triple taps go back a track. Touching and holding launches Bixby or rejects an incoming call.

I’ll need more time to see if Google Assistant can replace Bixby. As I mentioned, you can at least map one side to the ambient mode, if you want.

The charging case uses USB-C, which is hardly a surprise, and it’s reasonably pocketable, so taking it along shouldn’t feel too cumbersome. One thing to take into account here: they are not water-resistant at all. They’re sweat-resistance, but they will die if submerged in water. 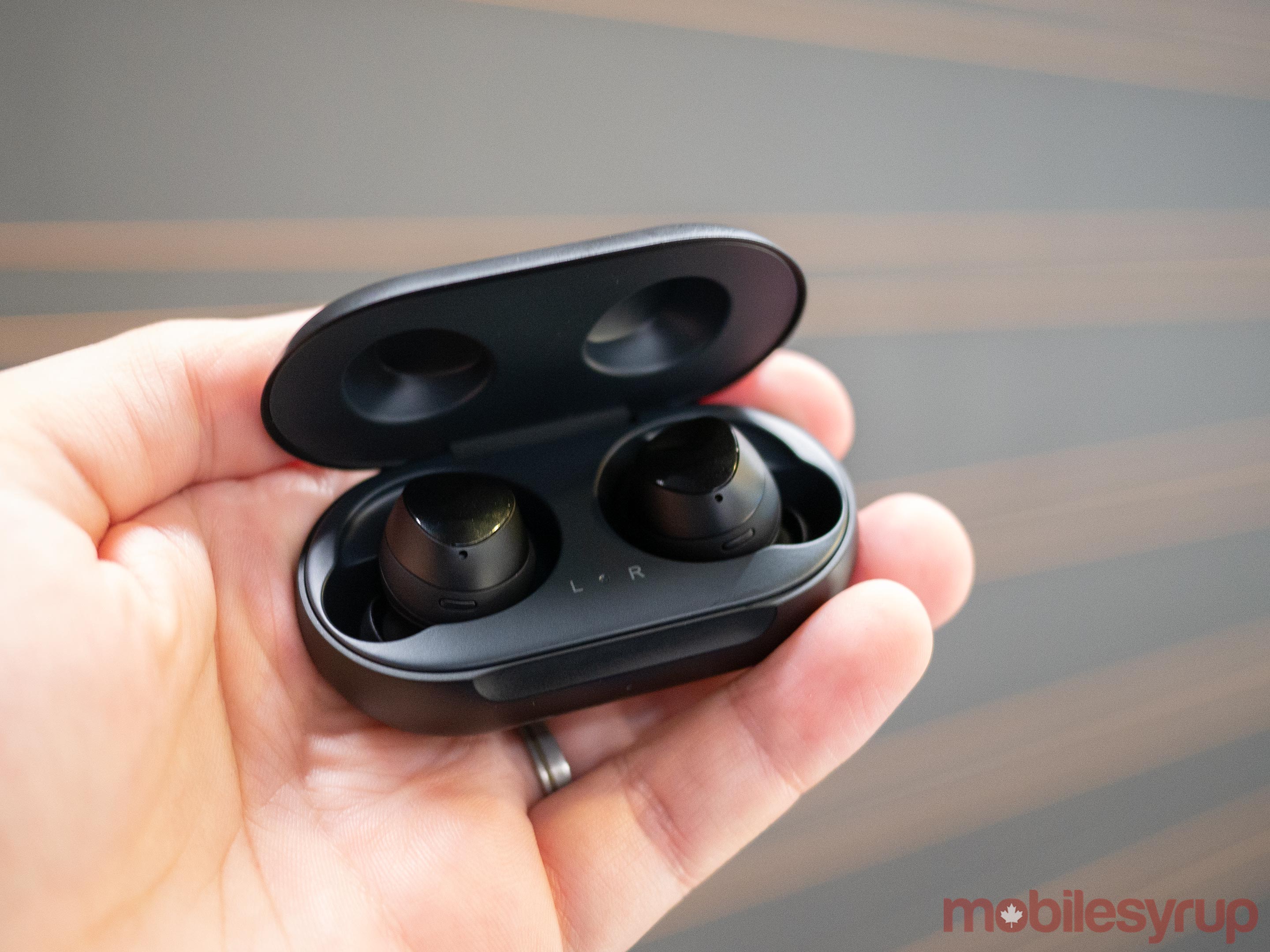 When Samsung acquired Harman in 2016, it absorbed the latter’s audio prowess, and the AKG tuning is reasonably evident when listening to the Galaxy Buds. The mids aren’t as muddy, and highs are nice and bright.

The bass could be better, though it’s the tightness of the fit that makes a huge difference there. That’s not just with these, mind you. Any pair of cord-free earbuds need that.

Most of my listening time was in a quiet hotel room, helping bring out the best in what Samsung could deliver. Music and podcasts came through nicely. Moving to a noisier environment, or just turning the TV on, I had to raise the volume to maintain the same level of clarity. Again, nothing unusual. That happens with any earbuds.

If you plan on using these for running or gym workouts, and don’t need the ultimate in audio fidelity, the Galaxy Buds will be fine, from what I can tell so far. They’re not on par with the likes of the Sennheiser Momentum True Wireless or Jabra Elite Active 65t, but easily sounded better than the AirPods. 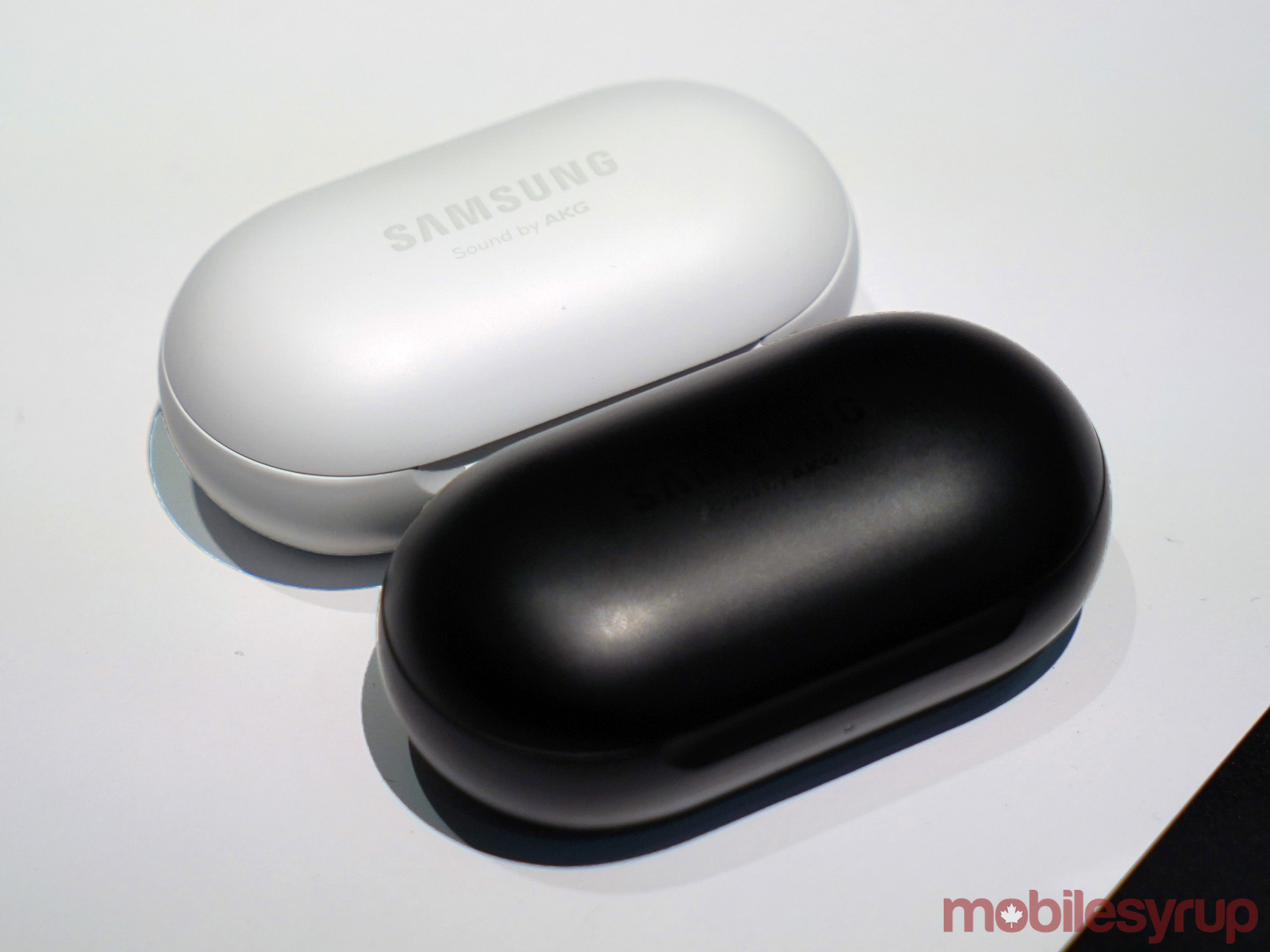 Samsung rates the Galaxy Buds at six hours of audio streaming and five hours of talk time. That’s better than the IconX could ever have managed, but isn’t game-breaking.

Volume level is the most significant determining factor. Those numbers are based on 50 percent volume. Go higher routinely, and that six hours is more likely to be five or less.

The case provides one additional charge, so you’re looking at a total of about 13 hours on a good (and quiet) day. Bet more on getting eight to 10 total in most circumstances.

Despite that, Samsung seems to want to give them away as part of pre-order deals available now south of the border. Best Buy is offering the Galaxy Buds as a standalone purchase as well. They will officially hit stores on March 8th.