Ghostbusters World is a deeper and more engaging Pokémon Go 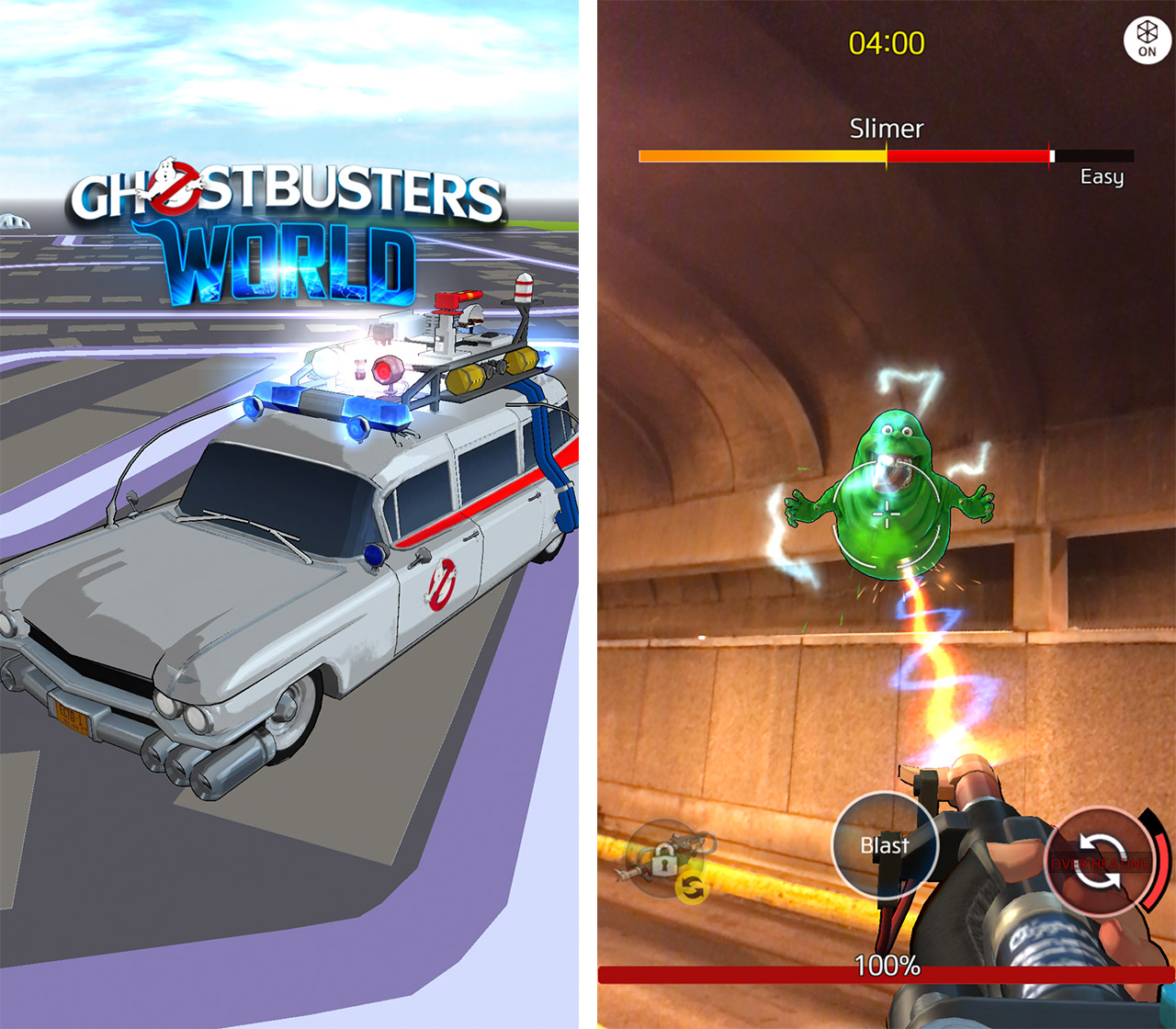 I never really got into developer Niantic’s Pokémon Go when it made its massive debut in summer of 2016.

While I could appreciate the augmented reality-powered concept and nostalgia behind it, I just found it to be pretty lacking as an actual game. Pokémon Go has been improved upon immensely over the past two years, to be sure (something my fellow MobileSyrup Brad has covered extensively), but that ship has long since sailed for me.

I was intrigued to see what it would do differently. To my surprise, it would be a disservice to write off Ghostbusters World as a mere Pokémon Go clone, if my time with a pre-launch build is any indication. In fact, the game improves upon Pokémon Go‘s core gameplay systems in many clever ways to create an experience that is at once quite similar but also filled with much richer and more satisfying content.

To start, you’re able to create your character using a few basic customization options, who will then don the classic Ghostbusters jumpsuit.

From then on, every time you boot up the game, you’re greeted to your avatar driving up in the Ecto-1 and stepping out onto the AR grid to the tune of the ever-catchy Ghostbusters theme, which will remain playing as wander the real world. It’s a great touch that got me pumped up before I even started ghostbusting. 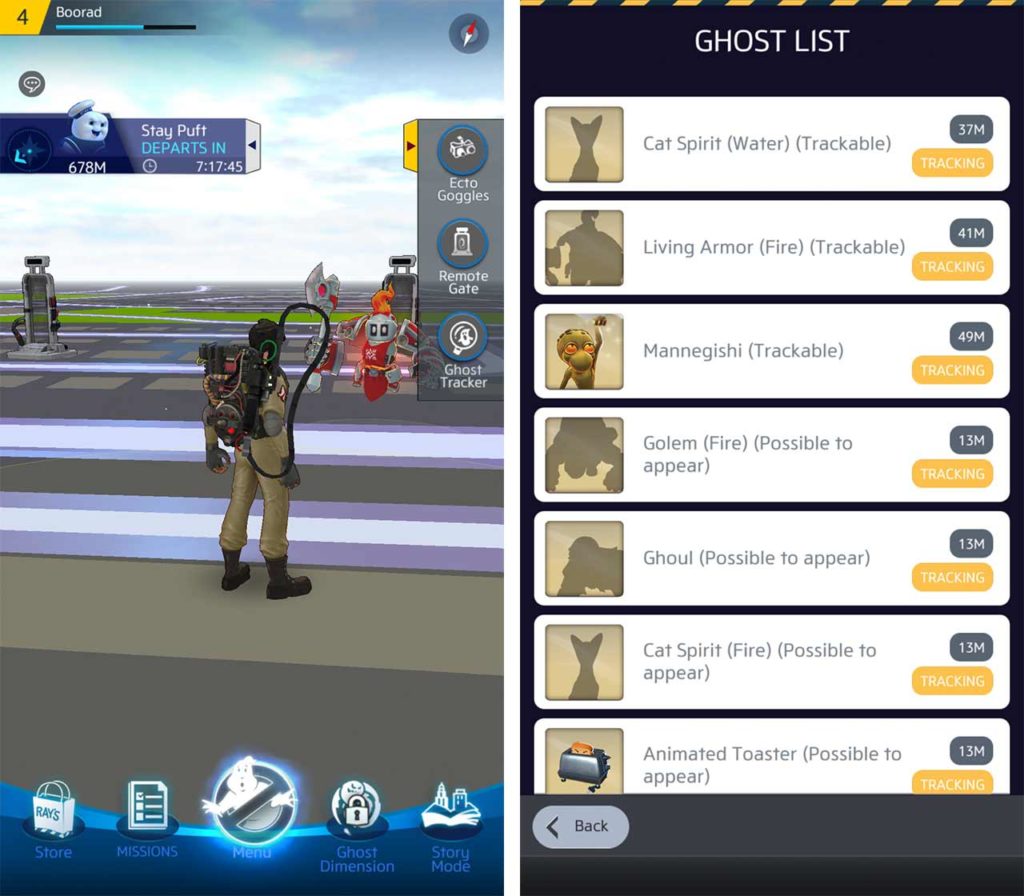 Once I got to it, though, I found myself having quite a bit of fun. As with Pokémon Go, your Ghostbusters World character will encounter in-game creatures that are situated in different spots that correspond to real-world areas. Once you encounter one, the core idea of capturing it remains the same. Interestingly, though, ghost encounters are more akin to mainline Pokémon game random encounters than what you find in Pokémon Go itself.

That is to say, rather than simply throwing a capture item at a pretty static creature like in Pokémon Go, you have to first weaken a ghost’s health using your proton beam.

This isn’t always so simple, as the ghost will warp around your environment to avoid your attacks, making good use of the game’s AR functionality as you turn your phone to locate and shoot it. Once the ghost is weakened enough, you’ll need to throw a trap at it and hold it your proton beam long enough for it to be sucked in. 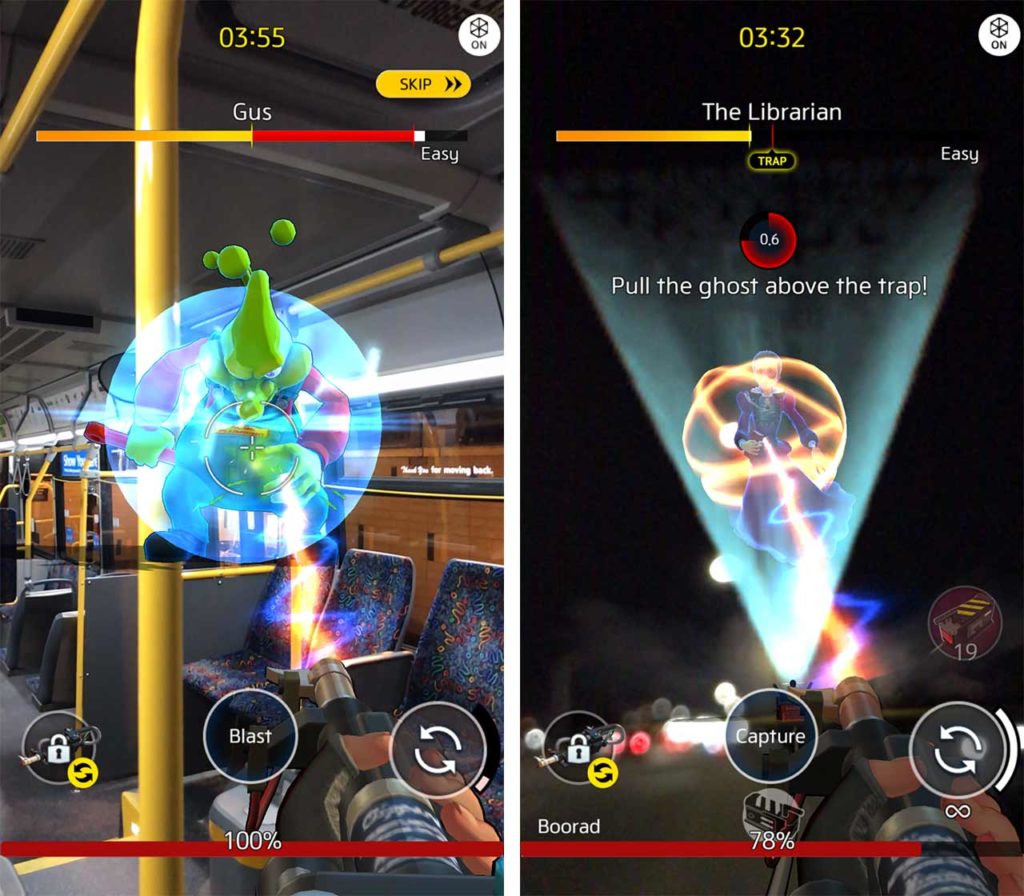 This is easier said than done, though. Ghosts can also hit you and lower your own health unless you’re quick enough to counter their attacks with a well-timed tap of the screen. Over time, you’ll gain new weapons and other equipment to bolster your character’s ghostbusting prowess, which is essential when fighting tougher ghosts. All of these mechanics come together to make ghost-capturing far more dynamic and engaging than Pokémon Go‘s monster encounters.

Like Pokémon Go, real-world landmarks serve as special pit-stops (known here as ‘Dimension Doors’) to encourage you to explore your surroundings some more and get some physical activity while doing it. At these Dimension Doors, you can gain resources and maybe even encounter rarer ghosts, so you’ll want to check out these locations as often as you can.

Larger ghosts like the Stay-Puft Marshmallow Man are located in specific locations (in my case, a nearby Service Ontario centre) and need to be tackled in four-player raids. Given that I’m using a pre-launch build, however, I haven’t actually been able to try out this feature. 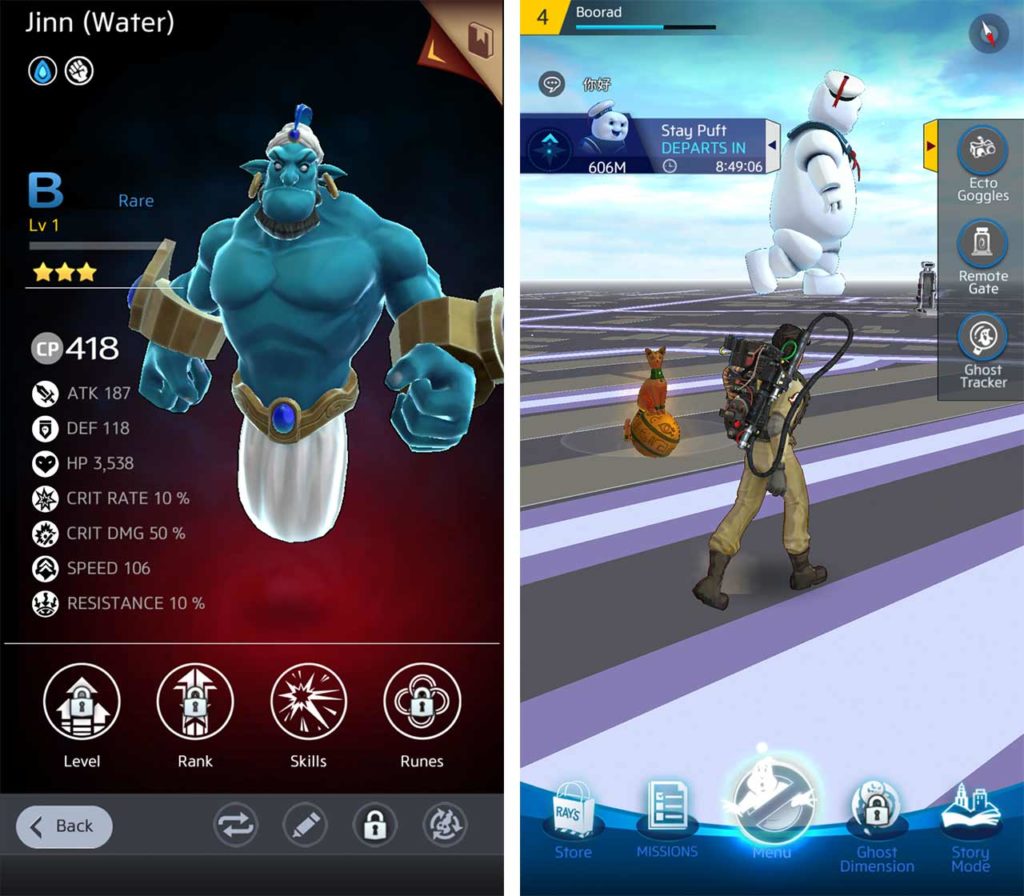 At the same time, though, the act of capturing ghosts, while mechanically entertaining, lacks the excitement of coming across an iconic Pokémon like Pikachu or Mewtwo. Altogether, there are at least 150 ghosts in Ghostbusters World, but the majority of them — even with wonderfully bizarre designs like genies, witches and toasters — are far less recognizable and appealing than the fan-favourite 150-odd first-generation of Pokémon.

Thankfully, FourThirtyThree has made the ghosts much more rewarding to actually use. In what’s probably the most significant change from Pokémon Go, you’ll be able to create and level up a party of four with your ghosts to engage in turn-based style combat.

Each ghost has its own stats and abilities, so I found myself experimenting with different party configurations as my roster continued to expand. As a massive fan of Japanese role-playing games like Final Fantasy, I loved that I was able to use these ghosts in such a substantive (albeit lighter and more mobile-optimized) way. 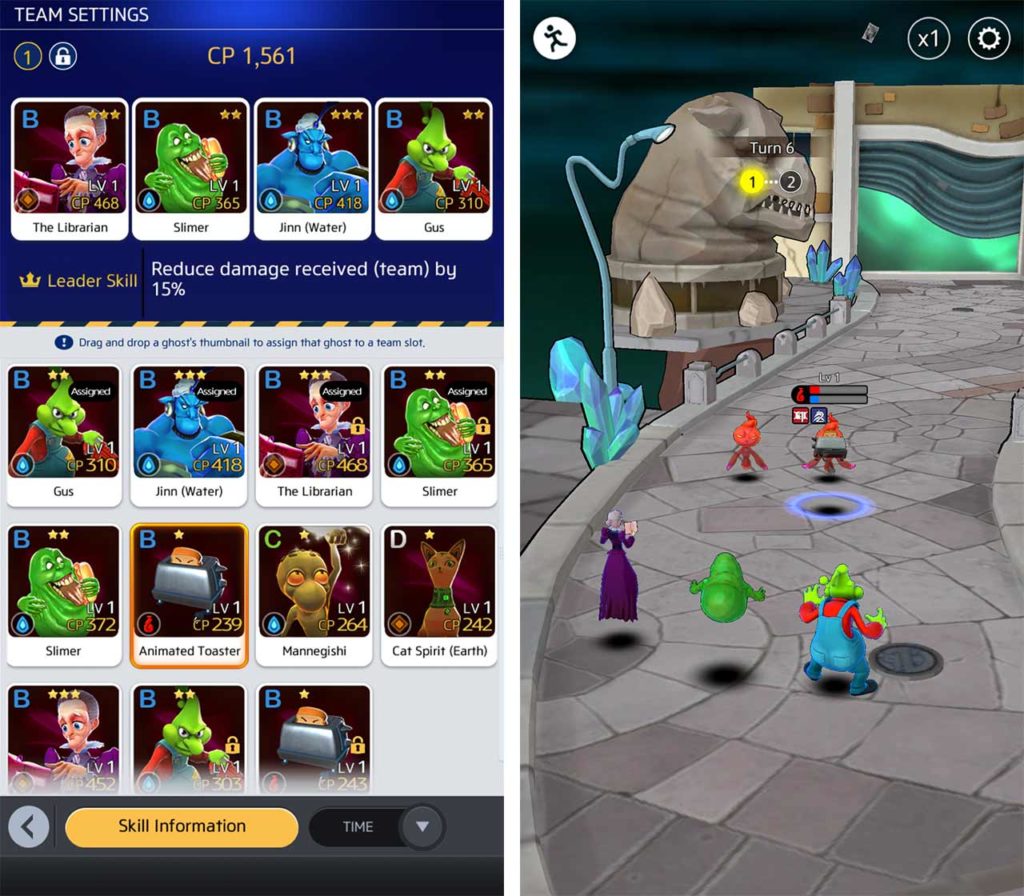 These ghosts can be used in a variety of game modes, including, most notably, a single-player campaign. Indeed, unlike Pokémon Go, Ghostbusters World has a story mode — one that features classic Ghostbusters characters and ghosts, no less.

While it’s not anything to truly write home about, it does offer some fun fan service appearances from the likes of Peter Venkman and Egon Spengler. As a nice touch, the story was penned by frequent Ghostbusters comic writer Eric Burnham, which, along with visual novel-style cutscenes, helps make the game feel even more charmingly authentic.

You can also take your party into the Ghost Dimension, a hub for the majority of Ghostbusters World‘s additional game modes. Here, you can engage in daily dungeon challenges in the Daily Haunt mode, traverse the 100-floor Gozer’s Tower and even battle other human players in the Ghost Arena. I wasn’t able to try out the Ghost Arena, but Gozer’s Tower and Daily Haunt so far seem like solid modes to offer long-term incentives to keep playing. 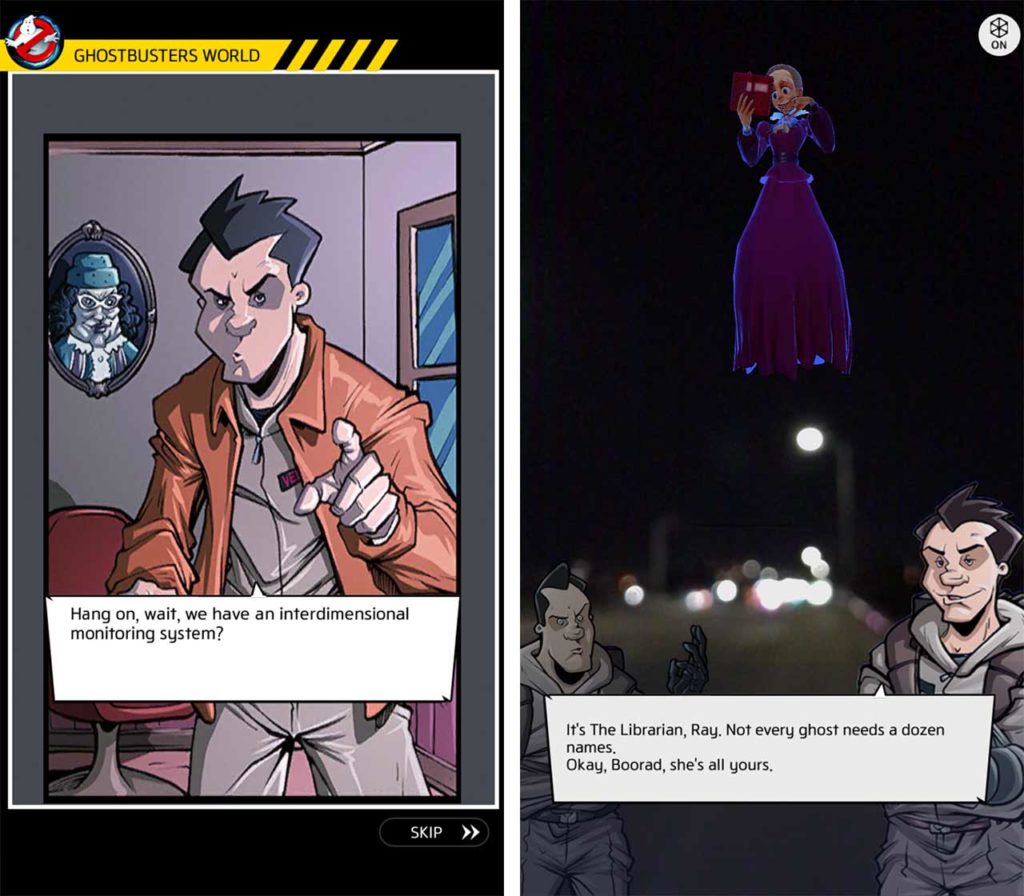 The biggest question mark, though, is just how well Ghostbusters will fare among mobile game players. Since I played a pre-launch build, I wasn’t able to see how stable the game runs with other players.

On a broader level, I’m not sure that the Ghostbusters property is anywhere near as revered as Pokémon is, which could lead to a smaller number of players to begin with. It also remains to be seen how well-balanced Ghostbusters World‘s microtransactions will be, so players hopefully won’t feel too pressured into dropping large amounts of real cash for in-game progress.

What I do know, though, is Ghostbusters World is a very well-made mobile game in its own right. FourThirtyThree has taken Pokémon Go‘s tried-and-true mobile game experience and considerably built upon it with a story mode, deeper player and creature customization options, more robust battle mechanics and a variety of game modes. Lemme tell ya something — bustin’ in Ghostbusters World makes me feel real good.

Ghostbusters World will launch on Android and iOS on October 23rd, with free pre-registration now open on the Google Play Store.