In some use cases, the chipmaker is promising a full five days of battery life 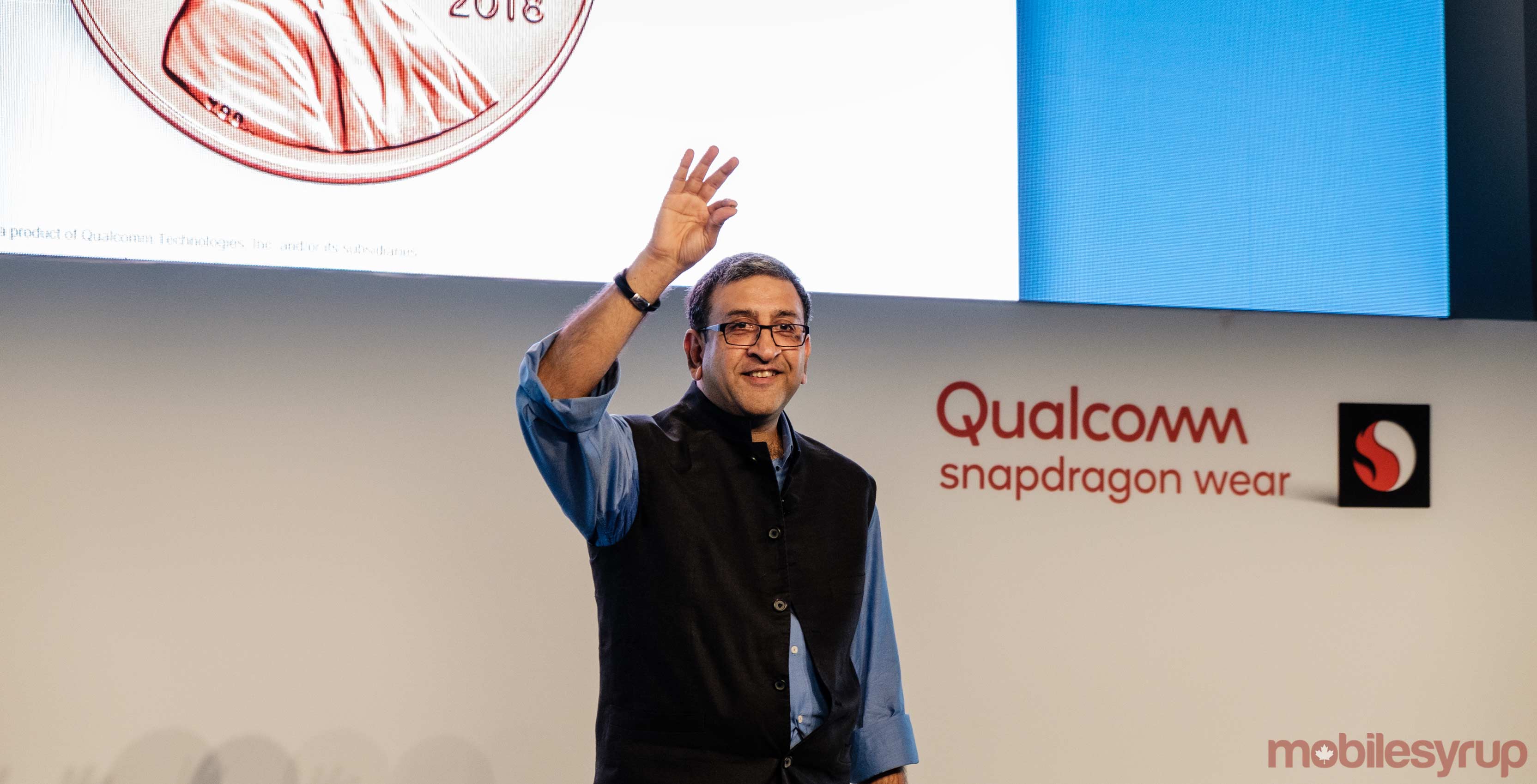 The long wait for a successor to Qualcomm’s aging Snapdragon Wear 2100 chipset — and the next-generation of Wear OS-based smartwatches that it will power — is over.

The San Diego-based chipmaker has announced the Snapdragon Wear 3100, the successor to the company’s more than two-year old Snapdragon Wear 2100 chipset, at an event in San Francisco, California.

At the event, Qualcomm called the 3100 the culmination of five plus years of research into smartwatch design.

The result is a chip that is a significant departure from the company’s previous flagship wearable chipset.

To start, the Snapdragon Wear 3100 features an all-new hierarchical design that was built from the ground up for wearable devices. This is a significant contrast from its predecessor, the Snapdragon Wear 2100, which Qualcomm created by adapting one of its existing smartphone chipsets.

At the heart of the 3100 are four high-performance ARM-based A7 cores, an integrated digital signal processor (DSP) and the company’s QCC1110 low-power co-processor. 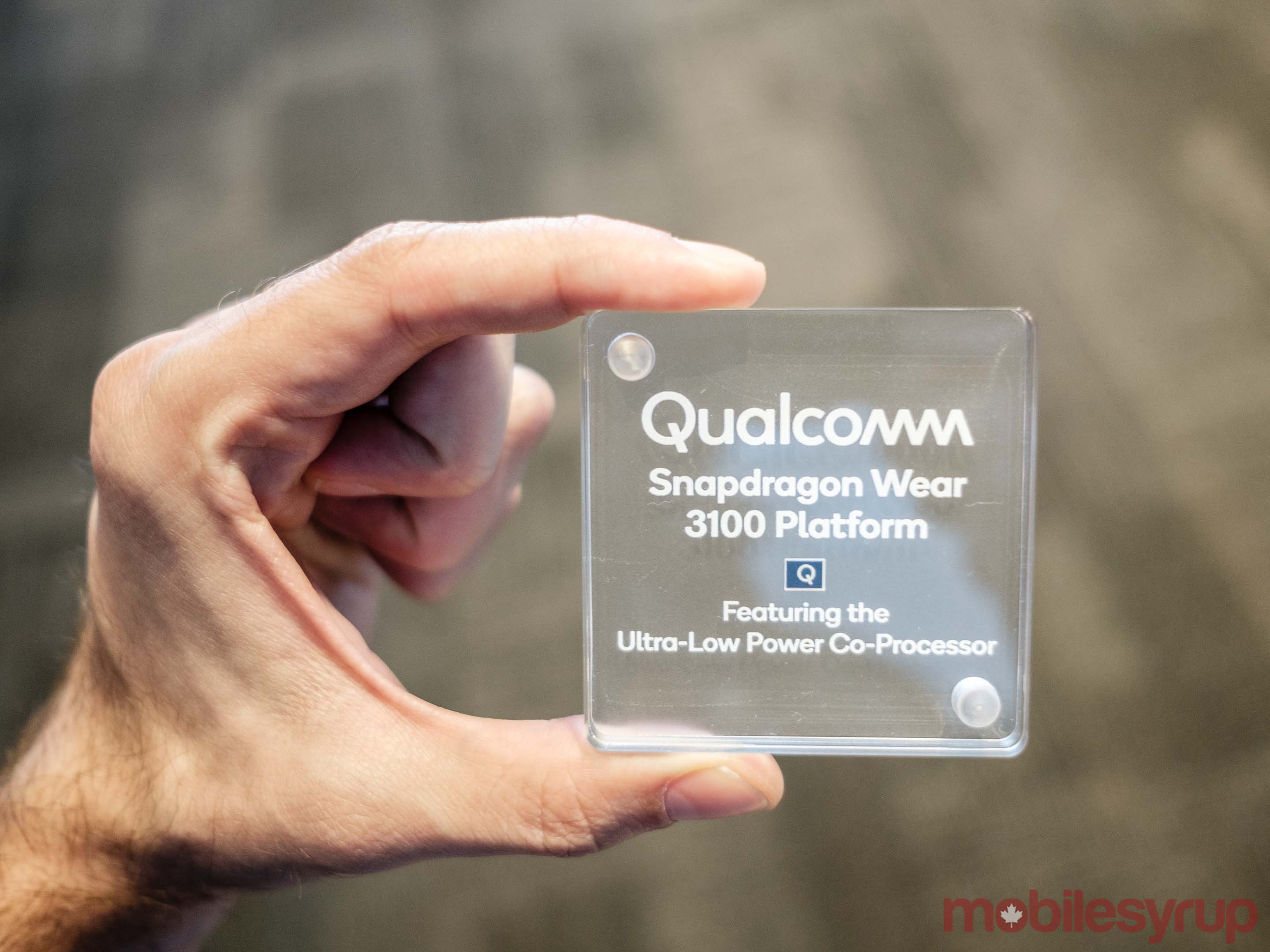 The chipset also features a custom-designed SRAM module, a new power management sub-system, in addition to low-power Bluetooth, NFC and Wi-Fi connectivity, as well as the option for LTE connectivity.

Measuring in at 5.2mm by 4mm, the QCC1110 is smaller than the size of a penny. Moreover, built into its design is a deep learning engine that can support a variety of custom workloads.

At launch, Qualcomm envisions OEMs will use the 3100’s co-processor to enable features like keyword detection, but the company believes that the engine can be expanded to support a variety of other features, as well.

One of the more nifty features the QCC1110 enables is three different standard modes of operation. Dubbed, ‘Enhanced Ambient Mode’, ‘Dedicated Sports Experiences’ and ‘Traditional Watch Mode,’ these change how the chipset functions in different use cases.

In its ambient mode, for instance, the 3100 enables a smartwatch to deliver a smooth moving second hand, up to 16 colours, live complications — allowing the device to display, at a glance, information like the temperature, the user’s step count and so on — and improved brightness. 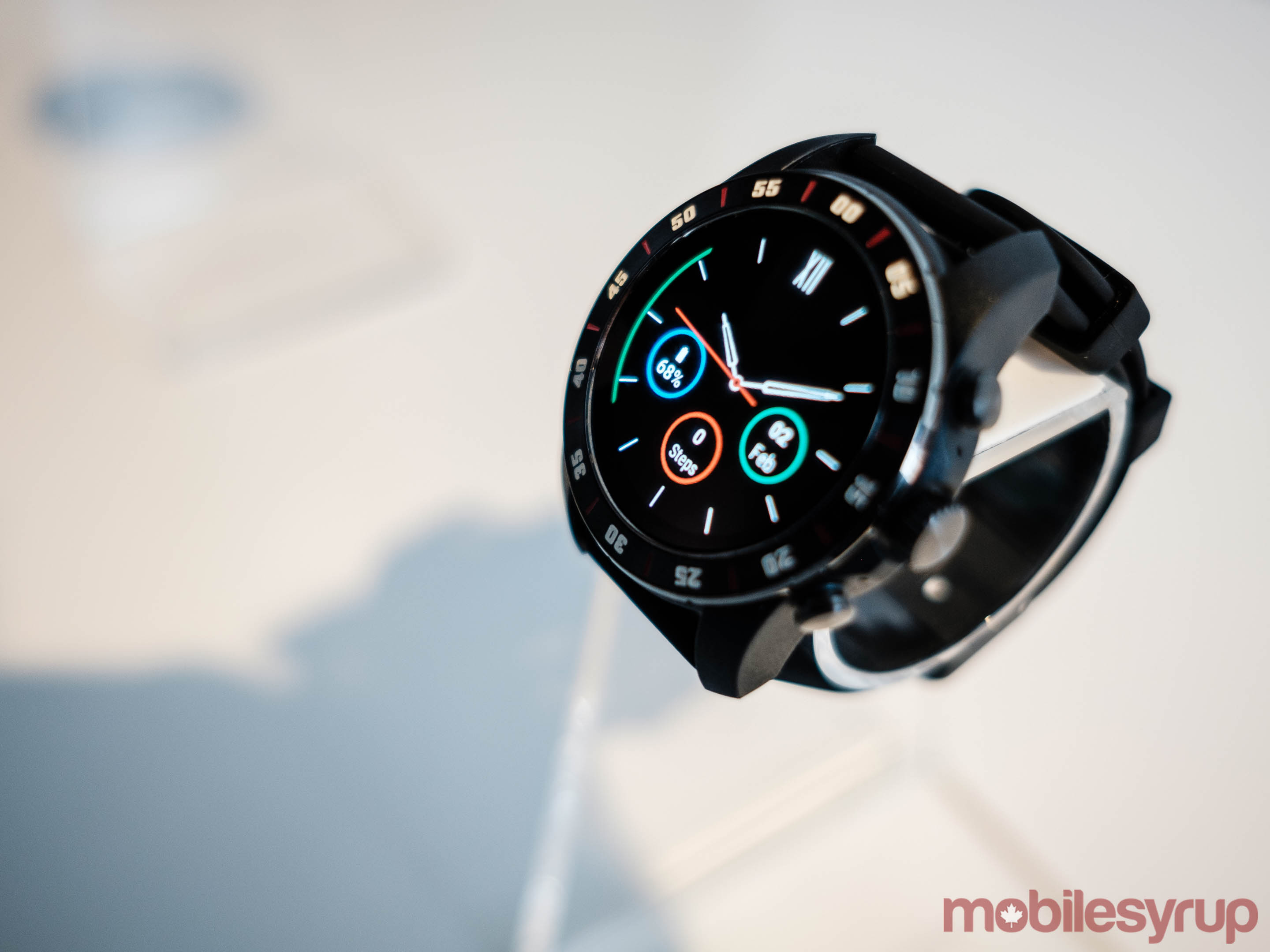 In contrast, in the final mode, a Wear 3100 smartwatch will function more like a traditional watch, showing the time and date but not much else, thereby greatly reducing battery power usage.

According to Qualcomm, the Wear 3100 is able to offer each of its three modes by being able to offload display and sensor processing to the chip’s low-power co-processor. This is the major innovation of the Snapdragon Wear 3100. After extensive research, the company settled on a five to 95 percent approach. With how smartwatch users use their devices, with most engaging in short bursts of interactivity, the company says it didn’t make sense to run the Wear 3100’s high-performance cores continuously. Instead, the co-processor is the part of the chip that is active 95 percent of the time.

Qualcomm also worked closely with Google to enhance how the Wear 3100 functions in conjunction with Wear OS.

The chip manufacturer says that the 3100 will deliver, among other benefits, improved performance and better connectivity to Wear OS devices thanks to the work the two companies did to integrate the two platforms more closely together.

However, the marquee feature of the 3100 is improved battery life — the company’s mantra with the Wear 3100 was “Make it more useful and make it last longer.”

Compared to the Snapdragon Wear 2100, Qualcomm says the 3100 delivers between four to 12 hours of additional operational uptime per device — the wide range is due to how other factors, such as display type and battery capacity, affect the battery life of a smartwatch. 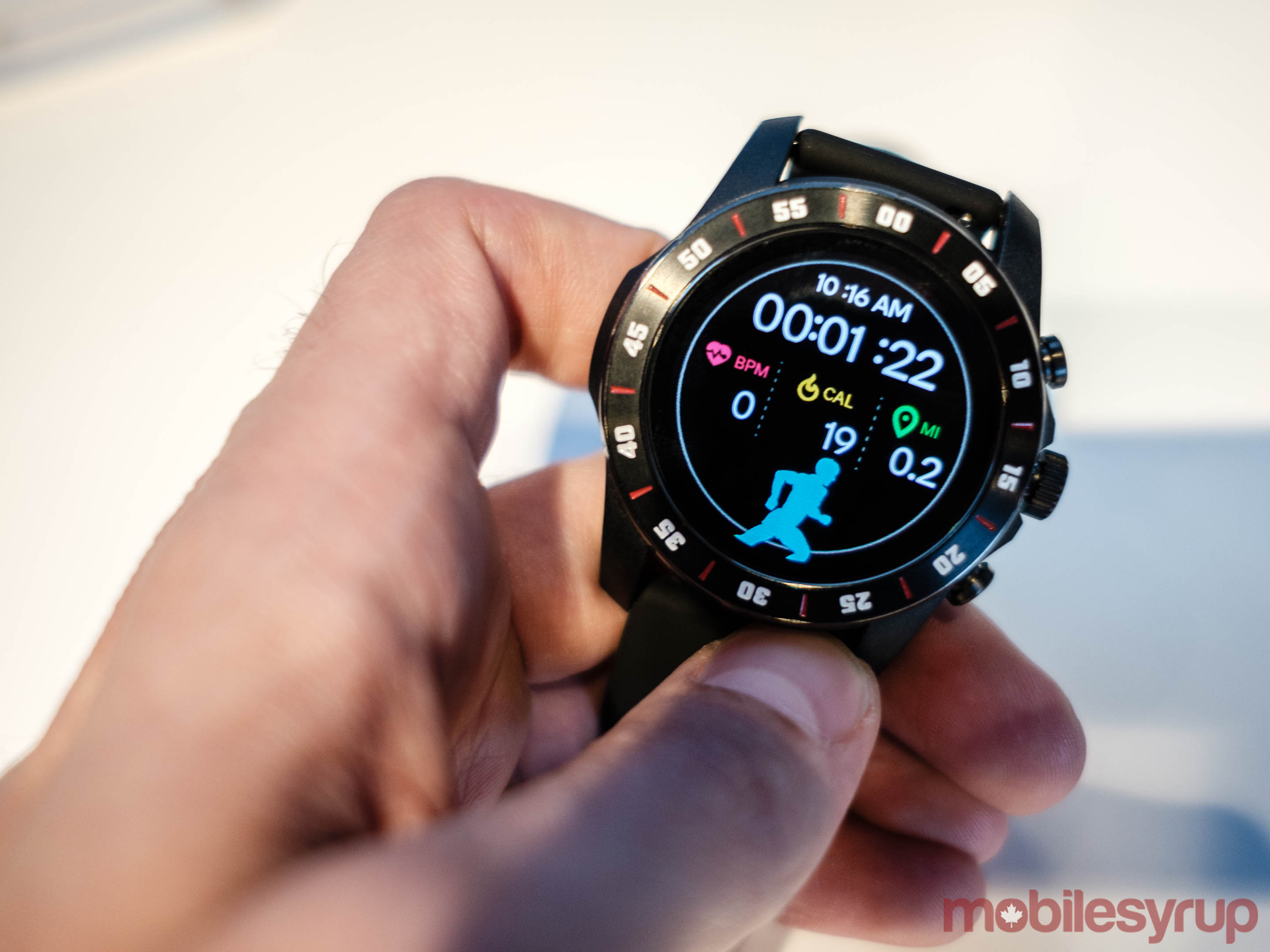 Across the board, the chipmaker says it’s been able to achieve power efficiency improvements. GPS tracking, for instance, uses 49 percent less battery power, while music playback and keyword detection use 34 and 43 percent less power, respectively.

In specific terms, Qualcomm claims a 3100 device paired with a 450mAh battery was able to deliver up to 15 hours of continuous GPS and heart rate-tracking in its own testing. In practice, this should allow Wear 3100-equipped smartwatches to provide both GPS and heart rate tracking for the entire duration of activities like mountain hikes and marathons.

Meanwhile, a smartwatch with a 340mAh capacity battery was able to deliver five days of mixed use — that is, with the user switching between full Wear OS-use and Traditional Watch Mode-use.

On a full charge, Qualcomm claims Snapdragon Wear 3100 smartwatches will be able to deliver up to 30 days of continuous battery life when they’re used exclusively in Traditional Watch Mode.

Post-launch, Qualcomm says it aims to improve mixed-use battery life to the point where users will only be required to charge a 3100-equipped smartwatch once every week. 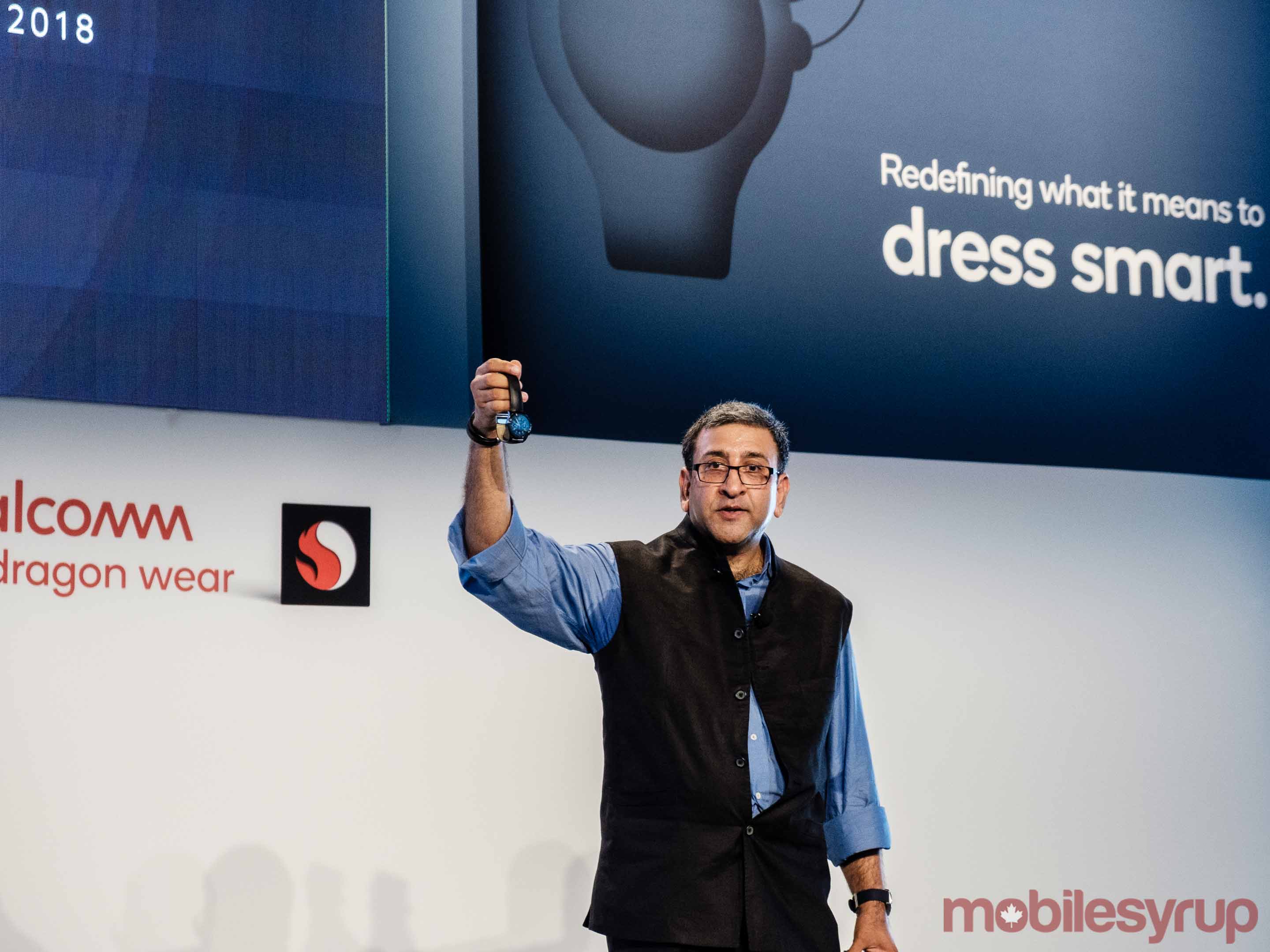 At its event, Qualcomm said Louis Vuitton, Montblanc and the Fossil Group will be among the first brands to integrate the chipset into their upcoming smartwatches. The first smartwatch to ship with the Snapdragon Wear 3100 will be the Montblanc Summit 2, which is scheduled to come out in October.

A flurry of new Wear OS product announcements are likely to follow as a result of the launch of the Wear 3100.

Prior to today’s launch, many hardware manufacturers — including the likes of Huawei — have been reluctant to announce new Wear OS devices due to how outdated the 2100 has become in recent months.

Canadian consumers, however, won’t have to wait longer to get their hands on the next generation of Wear OS smartwatches. According to Qualcomm, it’s already manufacturing the 3100 and shipping it to watchmakers.