However, Bell told MobileSyrup it did not review the FairPlay Canada application with the Canadian Radio-television and Telecommunications Commission (CRTC).

The internal commission documents were obtained through the Access to Information Act by the Forum for Research and Policy in Communications and were first reported on by University of Ottawa law professor Michael Geist.

Among the documents is an email that shows Bell’s senior vice-president of regulatory affairs, Robert Malcolmson, reached out to Chris MacDonald, commissioner for Atlantic Canada and Nunavut at the CRTC in July, 2017.

That email is shown below. 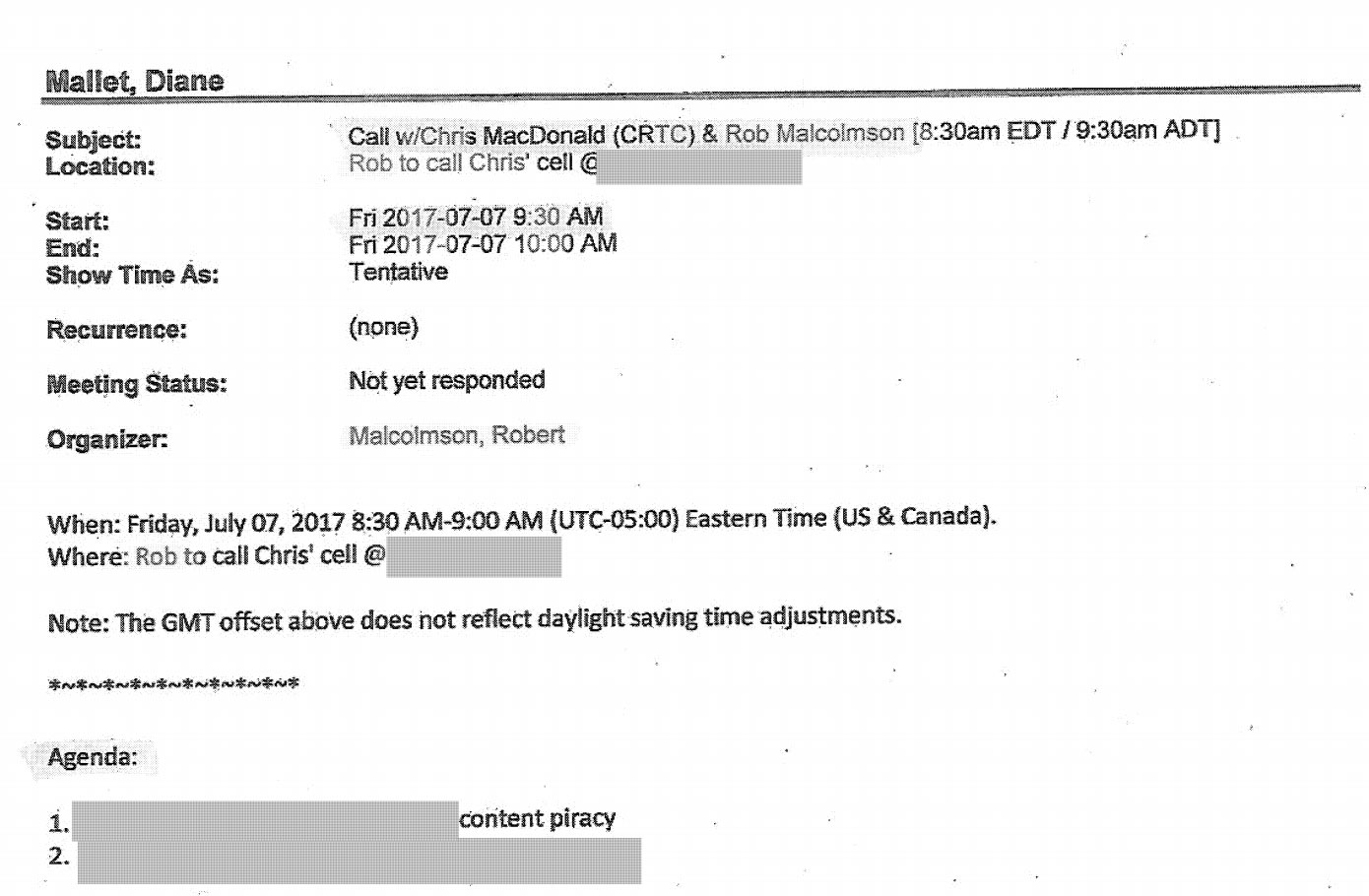 Subsequently, MacDonald requested a meeting in which Bell and its coalition could present its website-blocking plan to commissioners and Commission staff in September 2017. 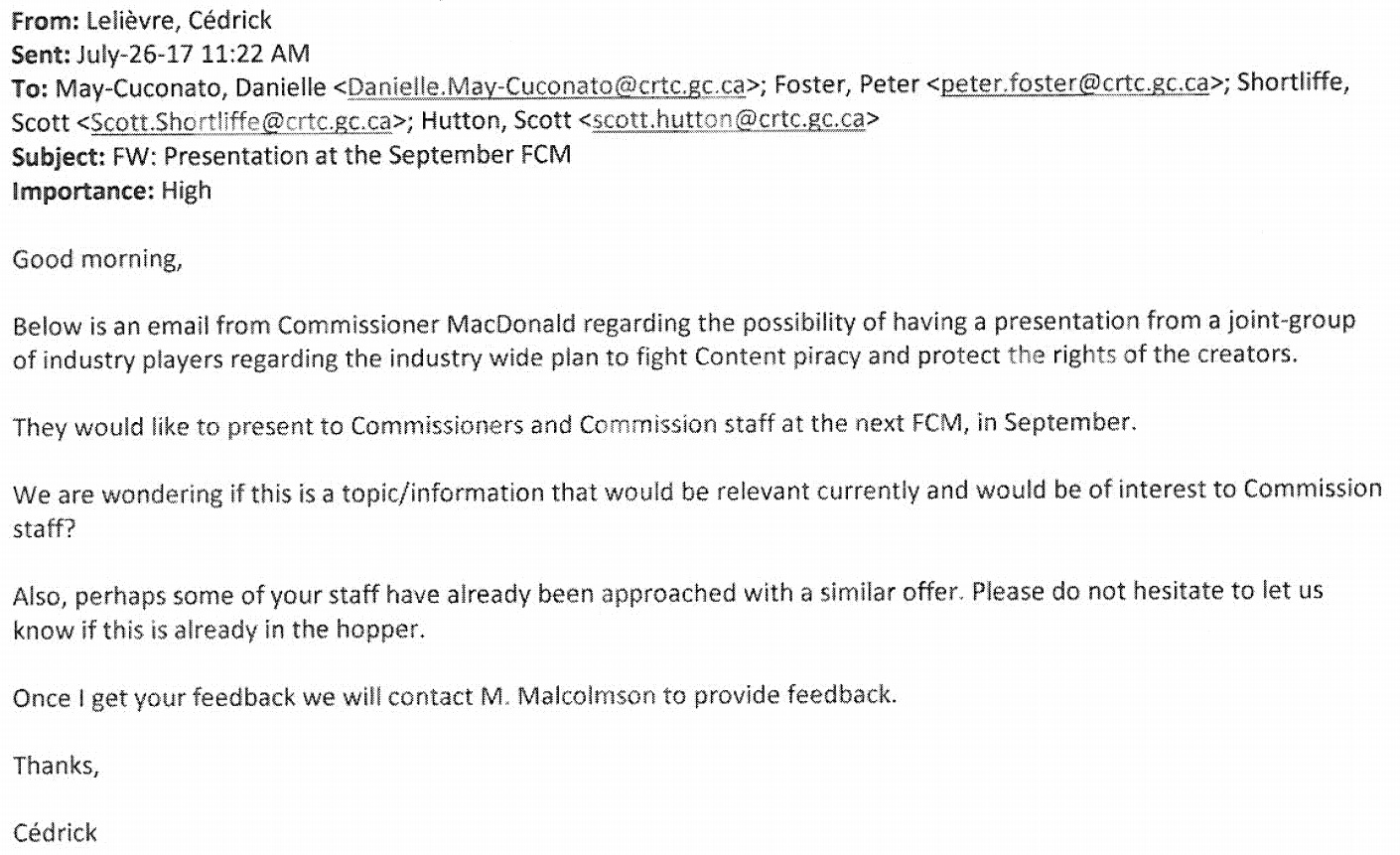 Ultimately, the request led to plans for a September 2017 presentation, with Malcolmson sending the CRTC a deck featuring a detailed preview of the filing. While the presentation is not shown here, it can be found within the documents linked above. 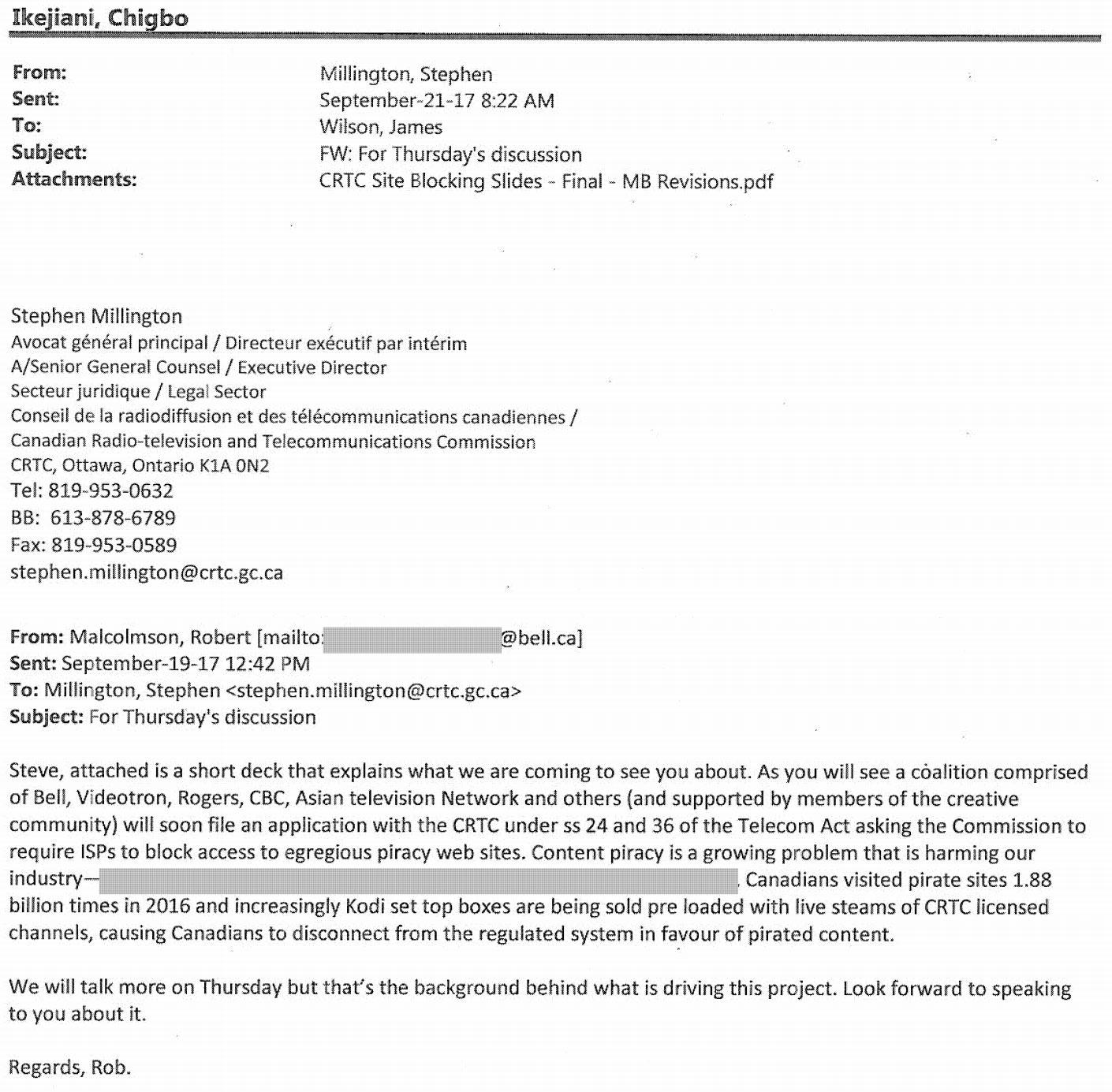 Bell also raised the same issue before a House of Commons committee the day before in the hopes of adding the website-blocking scheme to the North America Free Trade Agreement (NAFTA).

However, in response to MobileSyrup‘s request for comment, a Bell spokesperson stated: “Bell has not met with CRTC commissioners to review the FairPlay application.”

In a blog post detailing the documents, Canada research chair internet and e-commerce law at the University of Ottawa Michael Geist stated: “The meetings raise serious fairness concerns regarding the regulatory process on website blocking. By granting Bell a private audience with CRTC commissioners and officials, the company was able to present its case without counter-arguments or a public airing.”

Geist also asserted that without a transcript of the meeting, “there will be questions about whether the ultimate CRTC decision may have been influenced by evidence presented outside the formal hearing process.”

“It makes me feel as counsel for one of the intervenors that there’s a lot of procedural unfairness and just general unfairness in having to fight a battle that someone’s already been able to argue once before and they get to argue it again,” he told MobileSyrup.

Lawford also noted that the meeting could bring the decision into question after it’s made, whether by PIAC or some other group.

“I think that’s a pretty clear argument to make,” he said.

However, CRTC spokesperson Patricia Valladao stated that the meeting was in-line with normal procedure:

“The CRTC staff meet with all stakeholders, including consumer groups, on a regular basis. In doing this, [the stakeholders] are free to raise any issues that are not before the commission. So there is nothing procedurally unusual in this case.”

Valladao further stated that the September 2017 meeting referred to in the documents was not specifically made to discuss FairPlay, reiterating that Bell was free to bring up any issue that was not in front of the Commission.

“Once the issue is filed, it’s not something discussed within the department,” she said.

Still, Lawford told MobileSyrup he remained displeased with the CRTC’s decision to meet with Bell:

“It sounds like from the email that it was a pretty full-formed presentation, which was largely in the form of a legal argument… so to me, there should have been better judgement.”

The proposal was led by Bell and backed by a coalition of more than 25 organizations, including Rogers Media, Quebecor and the CBC.

The IPRA, as proposed by the coalition, would not require court review prior to issuing a block order, which has raised censorship flags for some consumer advocates. FairPlay states it would instead by subject to oversight by the Federal Court of Appeal.

The deadline for reply comments on the FairPlay Canada proposal ended May 14th, 2018, a summary of which will hit MobileSyrup shortly.

Now that the reply comments have been filed, the CRTC is expected move on to an analysis phase before coming to a final decision.