Bell had many highlights during Q4, specifically, the launch of Lucky Mobile, its low-cost prepaid service, the AlarmForce acquisition, and tested wireless speeds of 1 Gigabit per second in its Mississauga location.

Wireless revenue for Q4 2017 was $2.070 billion, which represents a 9.9 percent increase over the same period last year. Bell noted that the increase was a direct correlation to “strong postpaid subscriber growth, higher blended average revenue per user (ARPU) as customers moved to higher-rate plans with increasing data consumption, and the financial contribution from Bell MTS.” 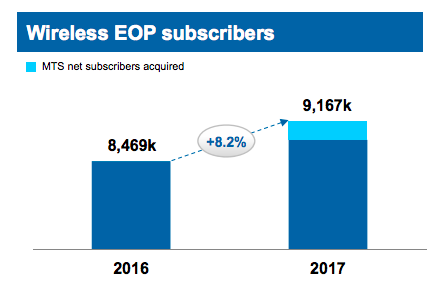 Total wireless subscribers reached 9,166,787, an increase of 8.2 percent year over year, and a lift of 158,514 during the past three months. “Richer promotional offers during the Black Friday to Christmas holiday period” were the reasons for the record results.

Bell also noted in its release that its 34 percent of Canadians can now connect to its Tri-band LTE-A network and 23 percent of the population hooks onto its Quad Band LTE-A speeds.

George Cope, President and Chief Executive Officer of BCE Inc. and Bell Canada.”Bell’s dedication to innovation has recently delivered the first Gigabit plus LTE wireless network capability, ongoing growth in new media platforms and content creation, the launch of Lucky Mobile for the growing low-cost mobile marketplace and rapid expansion into the Connected Home opportunity, including our integration of AlarmForce Industries.”