Mastercard looks to lead digital payments from behind 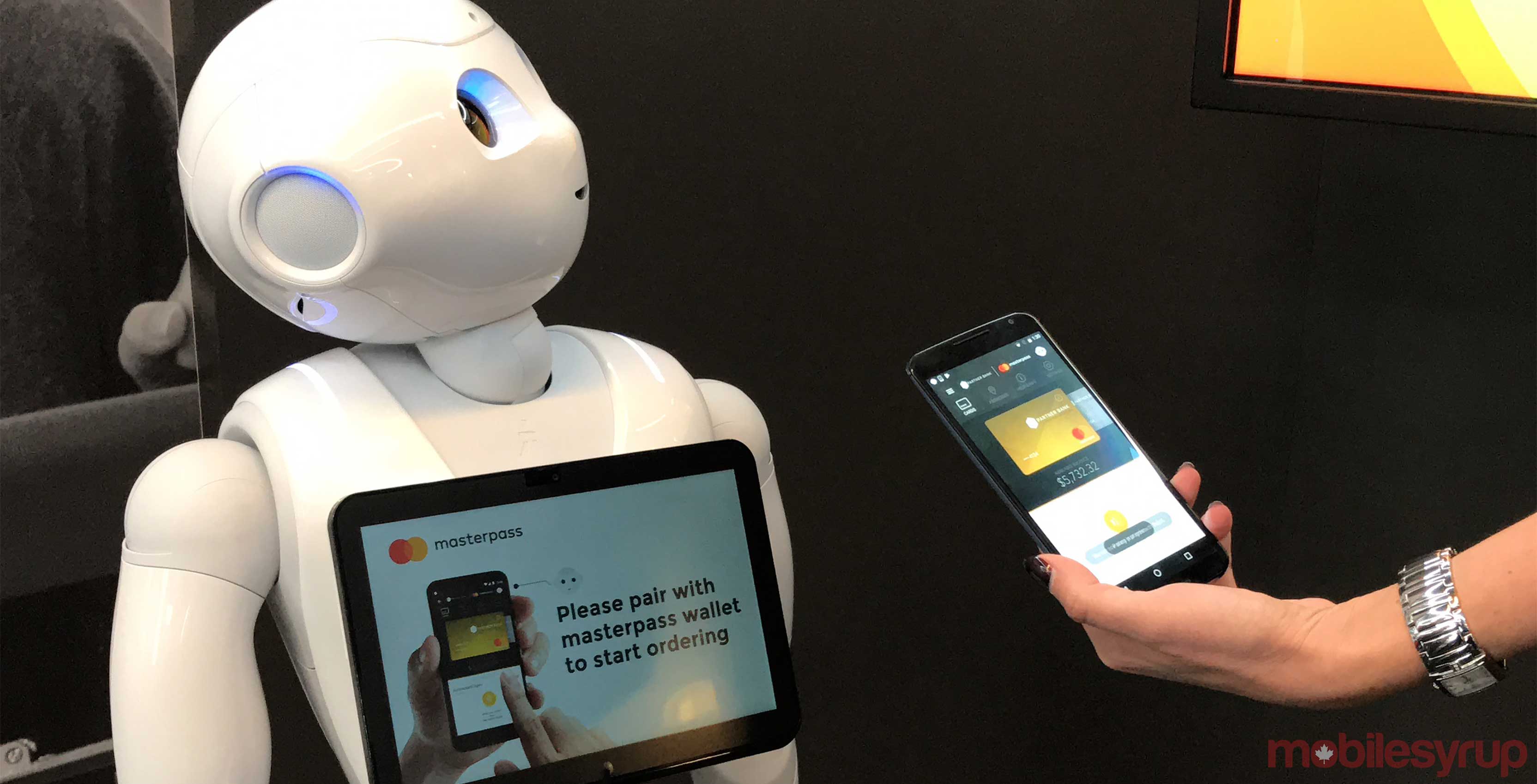 Mastercard will be pushing mobile payments harder moving forward as it sees a burgeoning shift from cash and cards to apps and contactless payments.

This is one of the key focuses at the company’s Tech Hub in New York, where some of those technologies and services are first developed before hitting the market. Among them are Masterpass and Qkr, two platforms that will be working hand-in-hand.

Mobile and digital payments have been advancing, except it’s a confusing landscape that’s not easy to sift through. With credit card companies, financial institutions and consumer electronics brands all contributing, it’s hard to make out who offers what.

It’s the overlapping layers that vendors will need to overcome, and Mastercard has its work cut out in helping to explain the nuances to its customers. Instead, it hopes others will handle most of the messaging.

wtill limited. Mastercard prefers to call it a ‘Masterpass wallet’ because it can retain other cards too. Not only are debit cards accepted, but so are Visa and American Express. Payment platforms, like PayPal, however, are not. It has to be a card in order to use Mastercard’s network to process payments.

Currently, there are a number of merchants accepting payment through Masterpass, either in-store or online through a web browser. Debit, credit and prepaid cards are accepted in the app. The key element missing is paying with them through the app directly. 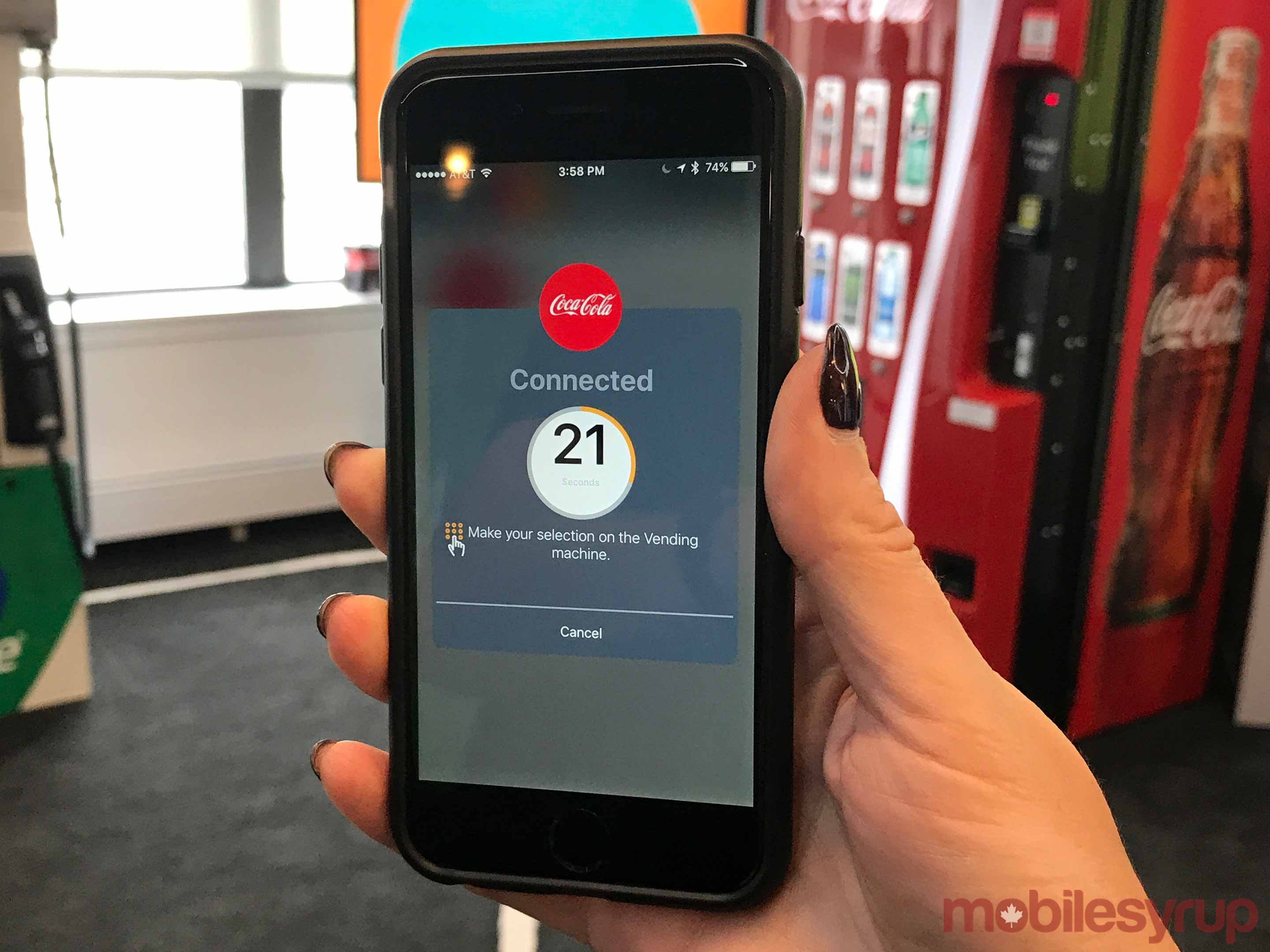 Mastercard will need help to go full circle. As an example, Citibank, a major bank in the U.S., is using Masterpass to implement what it calls “Citi Pay.” Citibank customers with a Mastercard issued by the bank can pay for things in-store, online and via the app without having to input any information. The Citi Pay button appears as an option for participating merchants at checkout because all the user’s details, including default cards and addresses are already embedded upon signing in.

Basically, Citi Pay is Masterpass branded under a different name. To date, Canadian banks have yet to step out in front and roll out a similar service. While BMO has already committed to Identity Check Mobile, a fingerprint and selfie feature for confirming payments, it’s separate from Masterpass.

Canadian merchants, on the other hand, have been more proactive at accepting Masterpass, but only really do so in-store or online.

Costco.ca is the latest to join the club, announcing that it would deploy it on the website in “the coming weeks.” This new partnership makes sense, considering Costco offers a Captial One Mastercard exclusively to its members already.

The agnosticism Mastercard is pursuing through Masterpass is admirable. Not so long ago, it would’ve been unthinkable for credit card competitors to facilitate each other’s payments.

With Apple Pay and Android Pay already available, what is the solution Masterpass offers by direct comparison? The answer is none.

“We make money when the network gets used, so there is no financial incentive, either way,” said James Anderson, executive vice president of digital payment products at Mastercard’s Tech Hub, in an interview with MobileSyrup. “It benefits Mastercard to have Apple, Google, Samsung and the banks pushing mobile and digital payments because they make money whenever the network is used.” 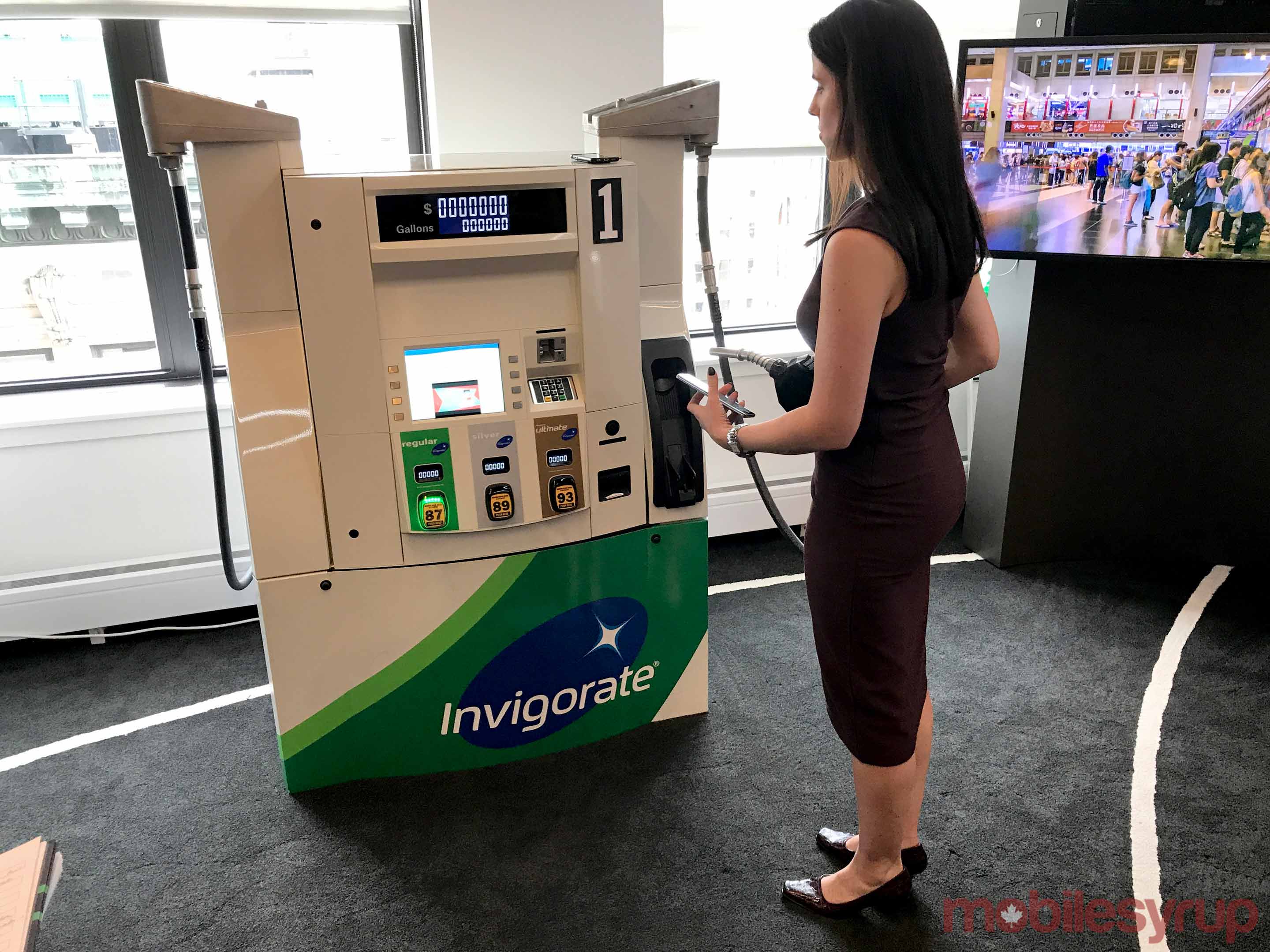 Anderson acknowledged that some users will prefer Apple or Google’s payment method, but suggested others will prefer a more holistic package from banks, which have been the traditional customer base for companies like Mastercard from the start.

“The same way banks communicated the benefits of using a Mastercard in the past, they can communicate the benefits of Masterpass,” he added. “There’s an early adopter tech segment that likes to be on the cutting edge, but once you get by that, you get a mass of people that aren’t really looking for anything, so someone needs to show them a different way to pay to make their life better.”

It’s hard to know what method is “better,” in some respects, because adoption and acceptance aren’t usually widespread.

Samsung Pay is available in Canada, except it’s limited to Visa cardholders issued by CIBC. PayPal has been offering pay-and-pickup for some time now, though vendors have to participate, and even then, it’s not inherently obvious they have.

The seamless way that apps like Uber and Ritual embed payment methods is a sign of how in-app purchases can be more than contactless. They require little more than a tap to approve — except the difference is that the merchant and middleman in the transaction are essentially invisible.

The examples shown at the Tech Hub focused on in-app payments in a number of different sales scenarios that are still fairly analog. A vending machine, gas pump, refrigerator and car dash are four being worked on.

These aren’t new, mind you. Visa has worked with Honda on a gas pump and parking metre payment method that is already piloting in New York and San Francisco.

Still, they simplify what have been pretty old school purchases. Many gas stations don’t have contactless at the pump, or even an easy way to scan a loyalty card’s bar code from an app like Stocard. Vending machines still take loose change as the only way to pay. Digitizing that would at least negate having to even keep coins in your pocket. 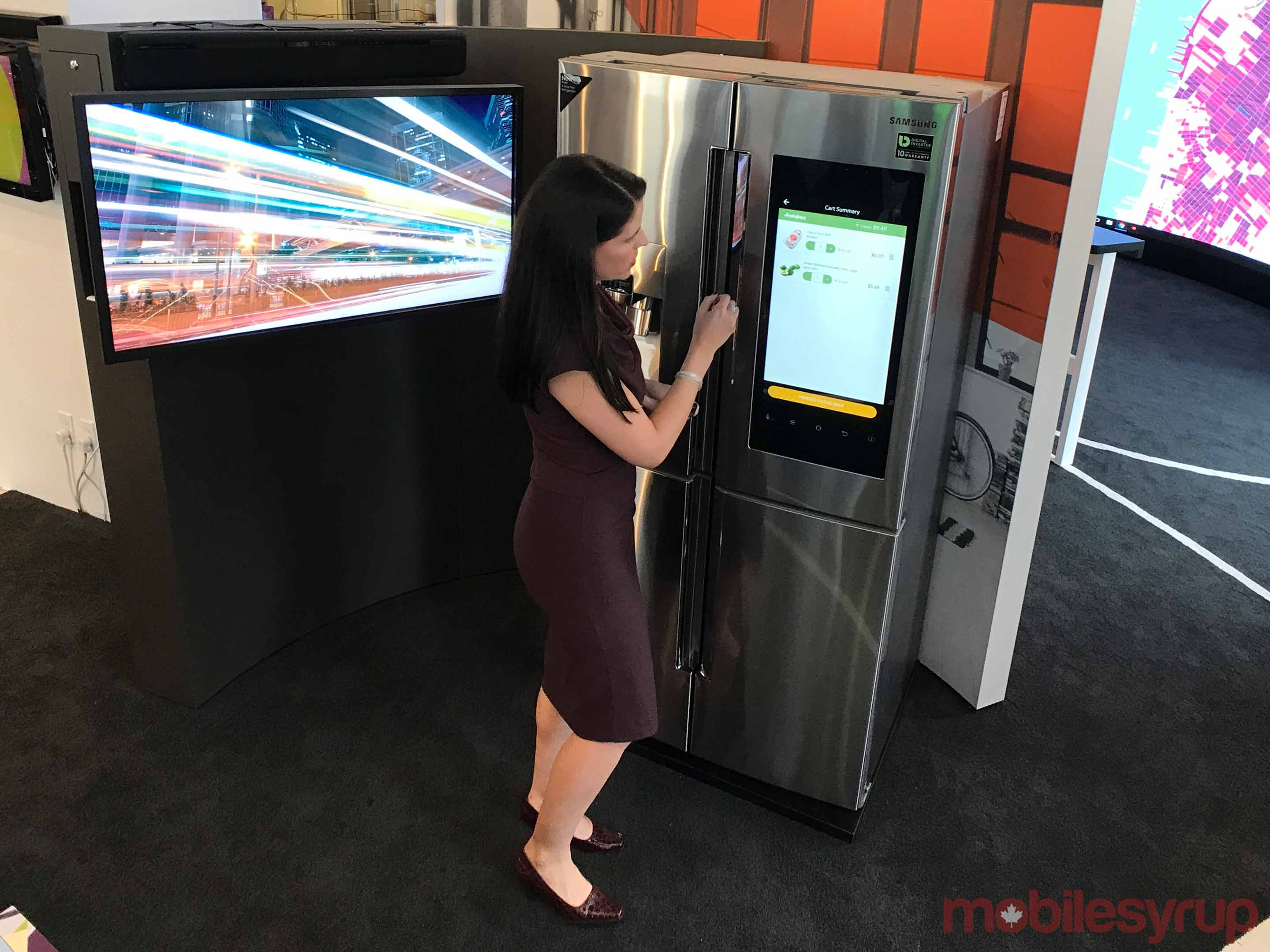 Refrigerators, or appliances at large, offer a unique use case. The likes of Samsung, LG and Whirlpool will have a hard time keeping them current with software updates alone. If an app like Masterpass can help bring in automatic payment from afar, that would be interesting.

For example, by knowing what’s left in the refrigerator before coming home from a vacation, it would be possible to order groceries remotely through Masterpass in advance based on what’s needed.

Qkr is also being touted as a way to better split a restaurant bill or maintain a tab at a bar, all digitally through the app. Interestingly, the app’s agnostic approach to other cards means a bill could be split with friends who are using debit or competitor credit cards.

A card to play

Apple Pay and Android Pay have been pushed as the easiest way to go contactless because you are likely to have your phone handy, and thus, don’t need to produce a card out of your actual wallet. They essentially replace tap-to-pay at the point of sale.

For Masterpass to emerge as a worthy alternative, at least in Canada, the bank-centric viewpoint makes sense. Banks would have the incentive to make the process painless, since the blame for any failed purchases would probably fall on them first.

While Mastercard is working to shore up the backend, it’s not offering a full front-facing complement to consumers. Banks will inevitably step in to do that. Either way, Masterpass will probably still carry on, even if it is under another banner.