Nintendo Switch Hands-on: Compelling concept with few games to back it up 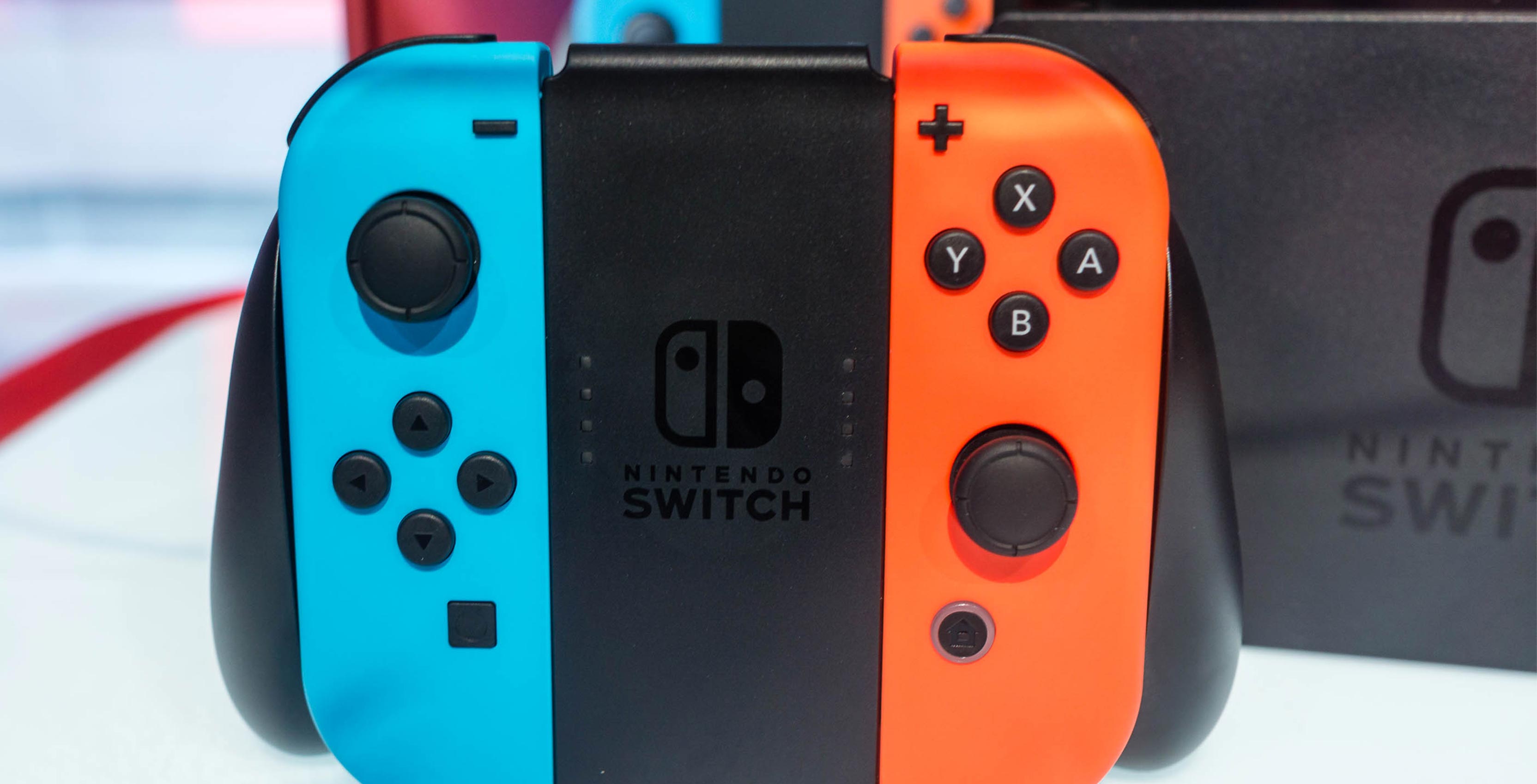 In an industry led by two video game consoles with very few significant differences — the Xbox One and PS4 — Nintendo’s Switch is a compelling proposition that’s easy to get excited about.

The inherent concept of turning the home console experience into something that’s portable is a fascinating experiment and what Nintendo’s failed Wii U should have been.

The Switch also fulfills a childhood dream I’ve envisioned for decades. As a kid, typically while ‘trapped’ at my parent’s cottage in the summer time or during long car rides, I longed to be able to play my favourite Nintendo 64 titles on the go. 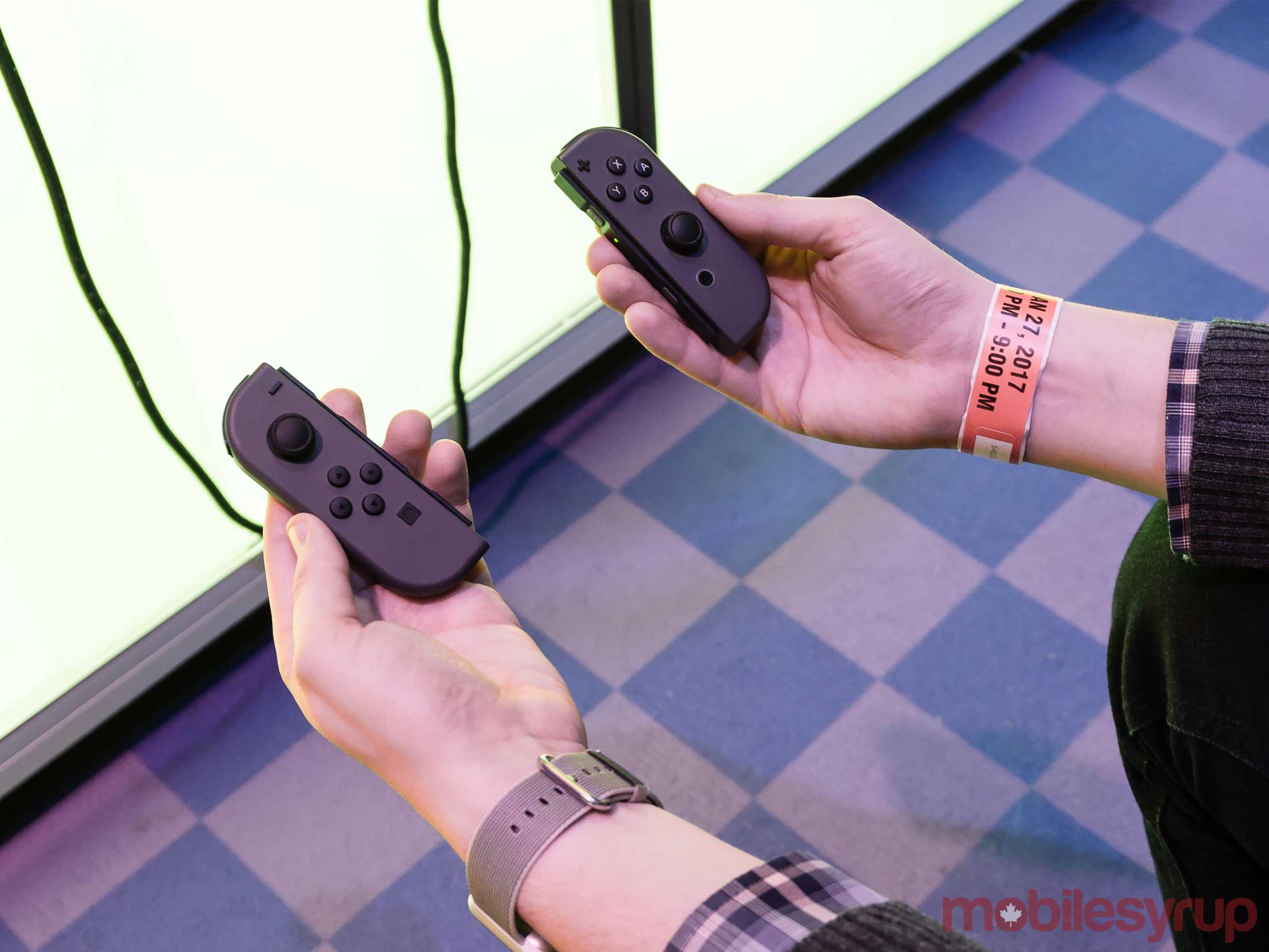 My yellow original Game Boy was great (Link’s Awakening remains my favourite Zelda game), but being able to bring a true console gaming experience with me anywhere, was what I’ve always wanted. Even as an adult who spends a large chunk of their time commuting and in airports, being able to bring a video game console on a trip, in a way that’s highly portable and makes sense, is a game changer.

With my hopes high, I attended a Nintendo Switch preview event in Toronto where I went hands-on with the Japanese gaming giant’s latest video game console. To my surprise, I actually walked away somewhat underwhelmed by the brief amount of time I spent with the Switch. The intriguing console-handheld hybrid narrative still has me excited about Nintendo’s upcoming video game console, but I’m also concerned that it’s set to repeat the same errors Nintendo made with the Wii U. 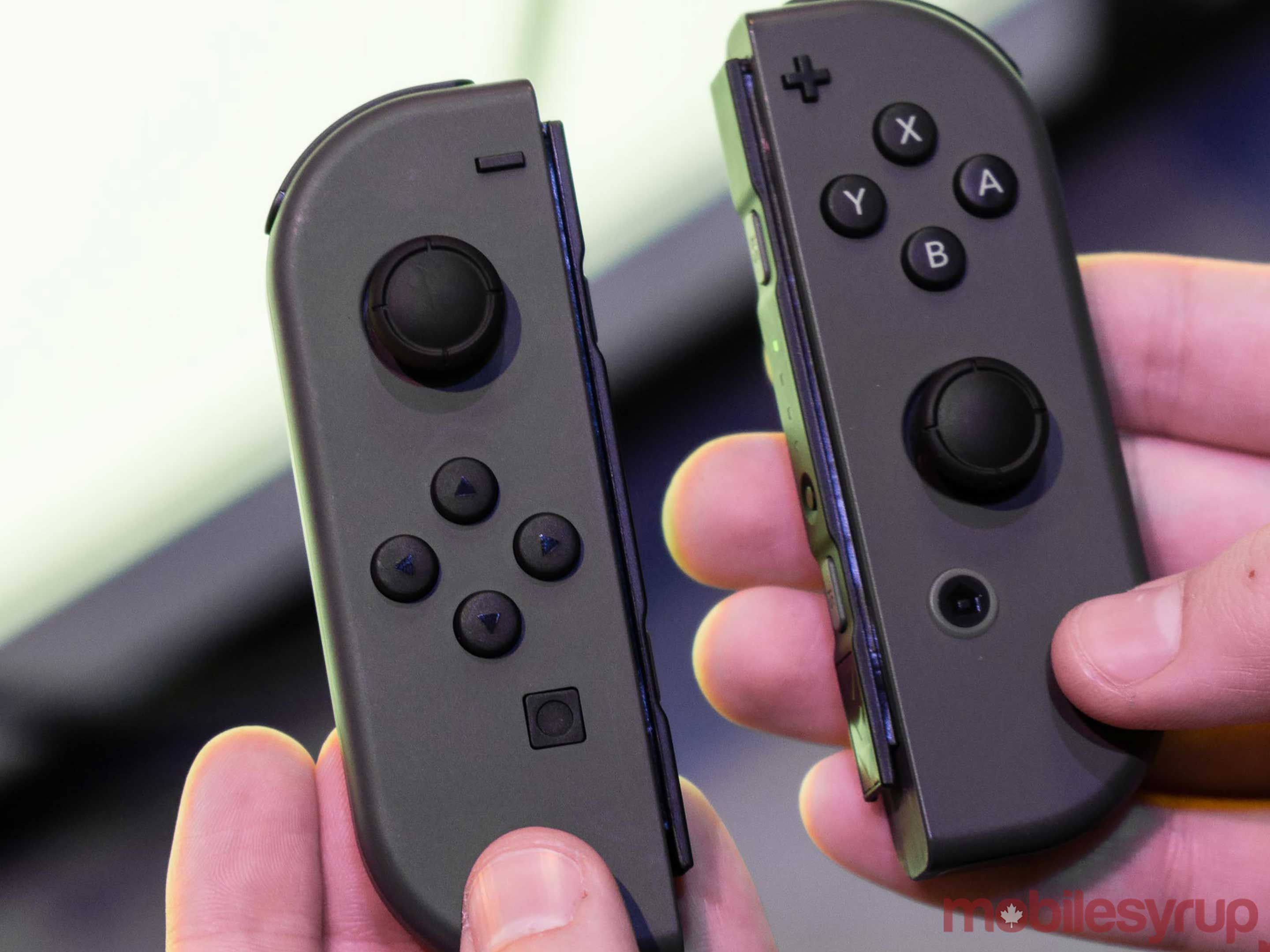 Surprisingly, the Switch’s Joy-Con controllers feel somewhat flimsy. Attaching the Joy-Cons to the side of the Switch is a simple process that only takes a few seconds, requiring you to line up the gamepads with a slot located on the side of the dock. The controllers also snap onto either side of the tablet solidly and don’t flex like other gamepad attachments I’ve used in the past that are designed for smartphones and tablets.

The Joy-Cons felt small in my hands and I found it difficult to not press the controller’s shoulder buttons by accident, though I like how versatile they are. You can also use the controllers while they’re attached together with the Joy-Con grip, creating a gamepad that feels more traditional, or separately and detached in a way that’s similar to the Wii’s Wiimote. Depending on how you’re playing, or if you have the Switch in tabletop mode and held up by its kickstand, this seems to be the most comfortable way to use the console’s gamepads. 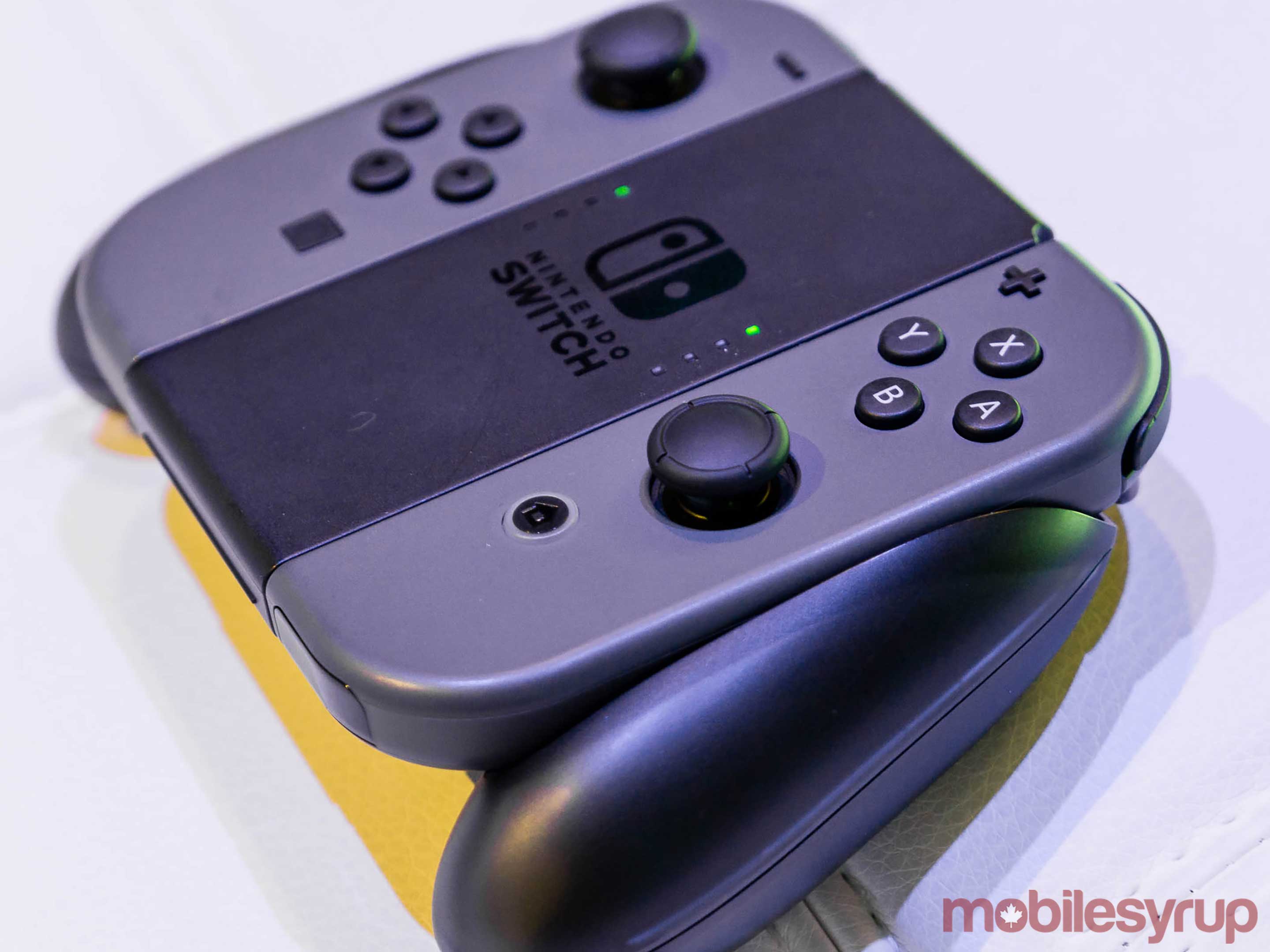 While the Joy-Cons felt flimsy, I’m hoping that with time the controller will grow on me. After all, when the Xbox One and PS4 launched a few years ago, I actually preferred the PlayStation 4’s Dualshock 4, only to eventually come to the conclusion that the Xbox One’s gamepad is the vastly superior controller months later (offset joysticks ftw!). The Switch’s Pro controller on the other hand, is sturdy and solid, though it likely won’t be compatible with all games

The Switch’s display reminded me of a mid-range tablet and felt relatively solid, though don’t expect the high-end build of an Apple-made iPad. Unfortunately — and this may be my biggest issue with the Switch — the tablet’s screen only features a 720p resolution, likely in an effort to save battery life, which early reports indicate could be as low as three hours with some games (this is estimated battery life for Breath of the Wild). In a tech industry where 1080p displays (and in some cases QHD) have become standard on most high-end smartphones and tablets, 720p is subpar and borderline unacceptable in 2017. 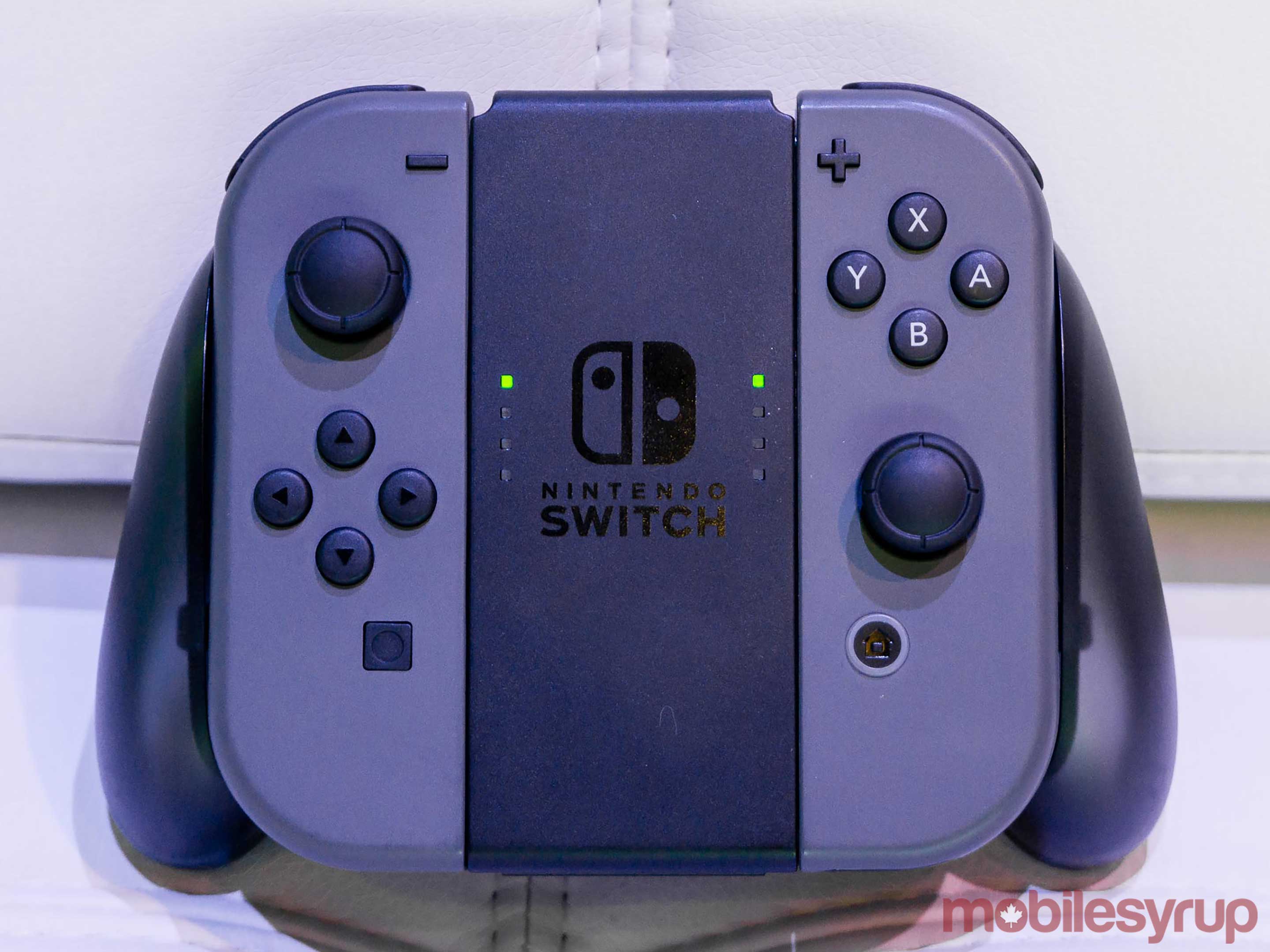 It also seems like not all games will output at 1080p to the television when the Switch is docked, with marquee title The Legend of Zelda: Breath of the Wild rumoured to hit only approximately 900p, leading further fuel to the rumours that the Switch will have difficulty running ports of Xbox One and PS4 games (to be fair, the Xbox One also often doesn’t run games at full 1080p).

The Switch’s dock on the other hand, is more difficult to judge since it was secured to the table it was sitting on at all the demo stations at the event. Sliding the Switch into the dock is a simple process and only took a few seconds, which was great to see given Nintendo is pushing it as something you can grab and instantly continue playing.

Where are the games? 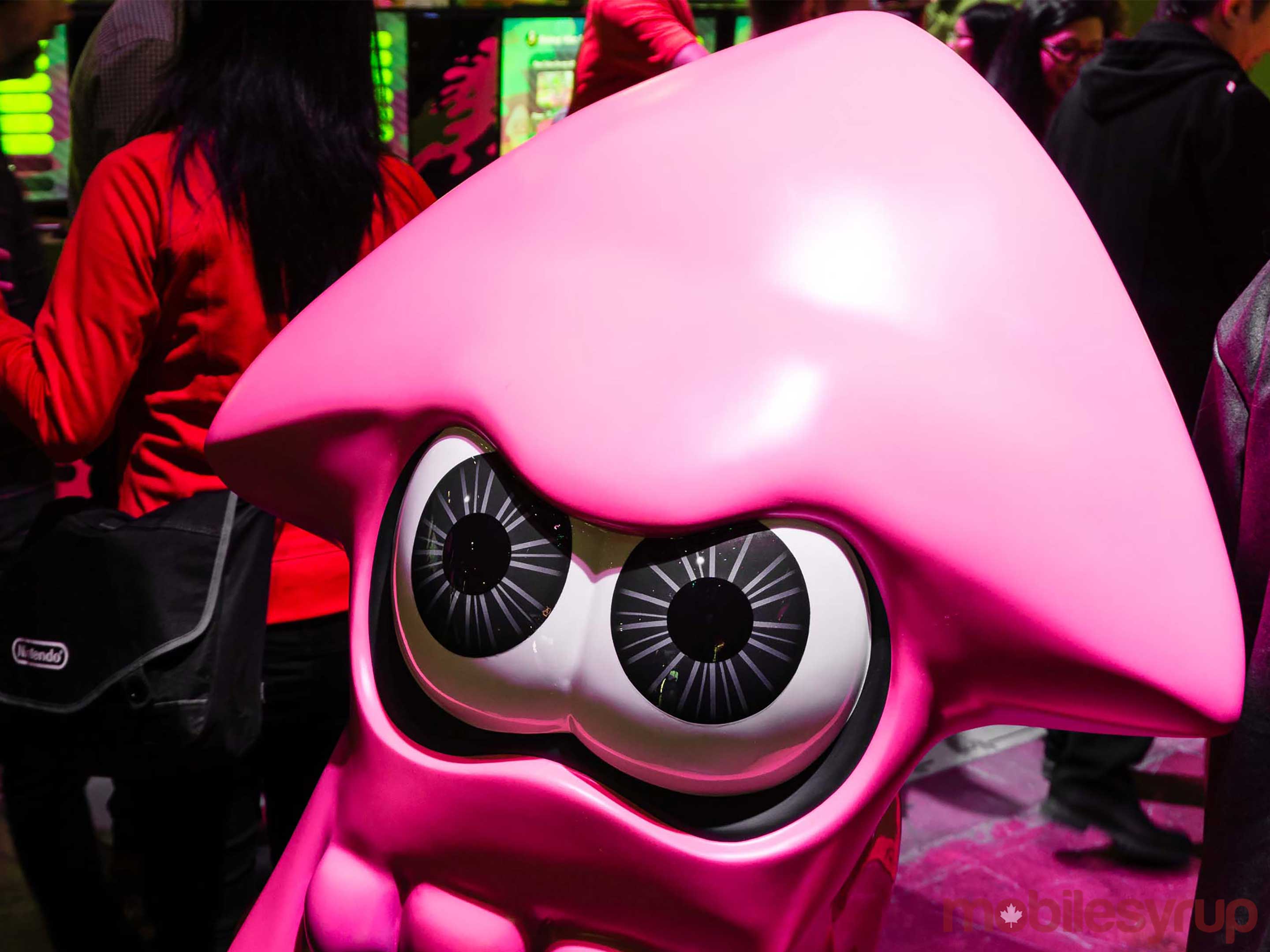 Consoles always live or die by the quality of their games and especially in Nintendo’s case, third-party support. Various Nintendo home consoles over the years have struggled with attracting third-party developers, starting with the Nintendo 64 in the mid to late 90s and continuing into the GameCube era of the early 2000s. Even the monumentally successful Wii struggled with attracting developers that weren’t directly associated with Nintendo towards the end of its life cycle.

With the Switch, Nintendo is adopting the same strategy it did with the Wii and Wii U, releasing an underpowered game console that will likely have difficulty matching the hardware featured in current generation competitors. With the Switch, there’s no getting around the fact that third-party support is abysmal at launch, with most games worth playing — Shin Megami Tensei and Rime for example — not arriving for months. In terms of third-party launch titles, only Super Bomberman R and I Am Setsuna interest me. 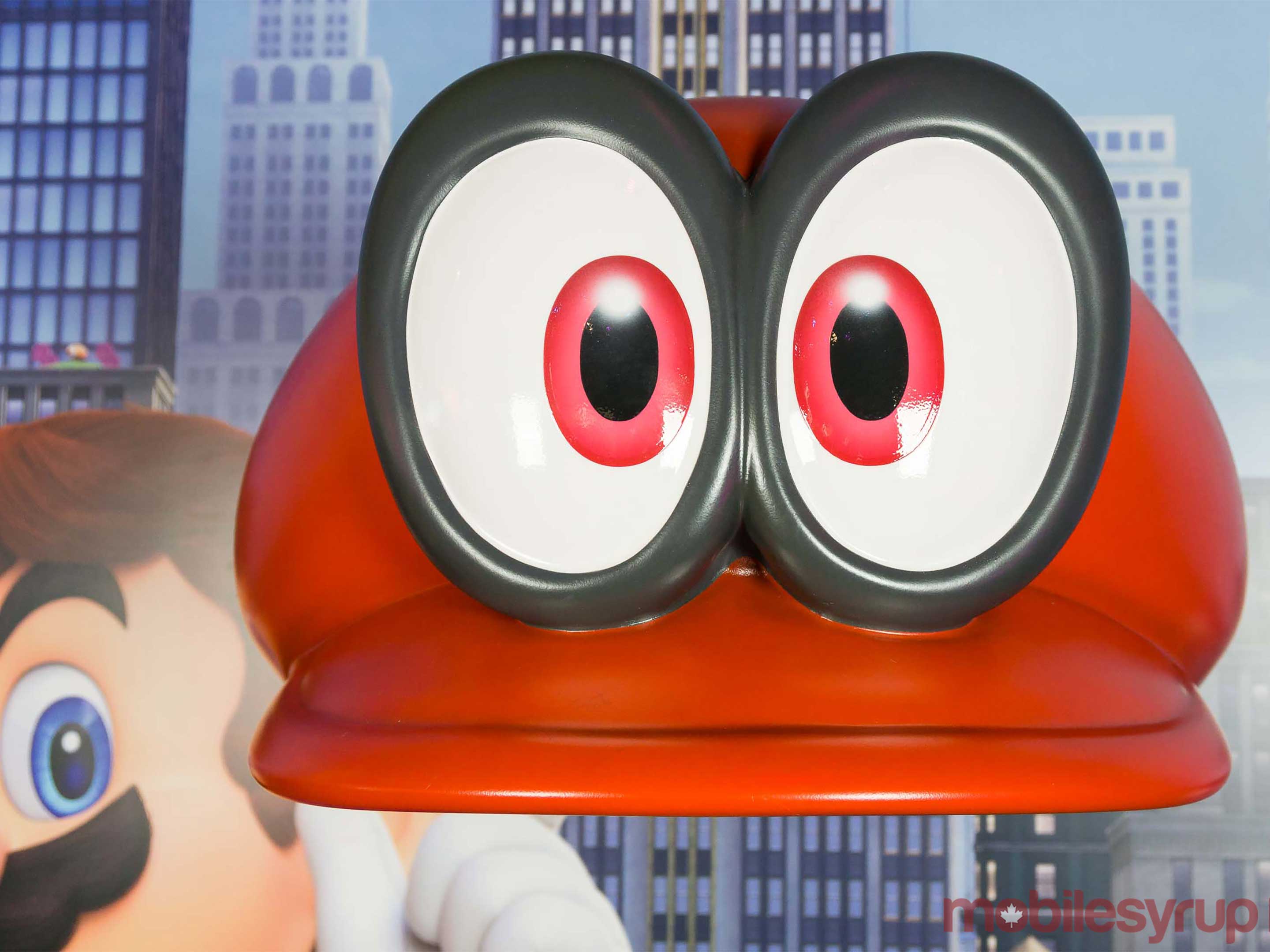 Nintendo’s first-party offerings are equally disappointing, apart from Breath of the Wild, which despite playing spectacularly and being a monumental step forward for the Zelda series’ gameplay, (my colleague Igor Bonifacic is going to take a more in-depth look at the game) it’s actually visually underwhelming. While Breath of the Wild looked incredible in trailers and still screenshots, the game is hindered by slowdown issues and distracting antialiasing.

1-2-Switch is a fascinating experiment, but even first-party offerings like Mario Kart 8 Deluxe and Arms, a game that is essentially an upgraded, more accurate version of Wii Sports boxing, aren’t launching until later this year. 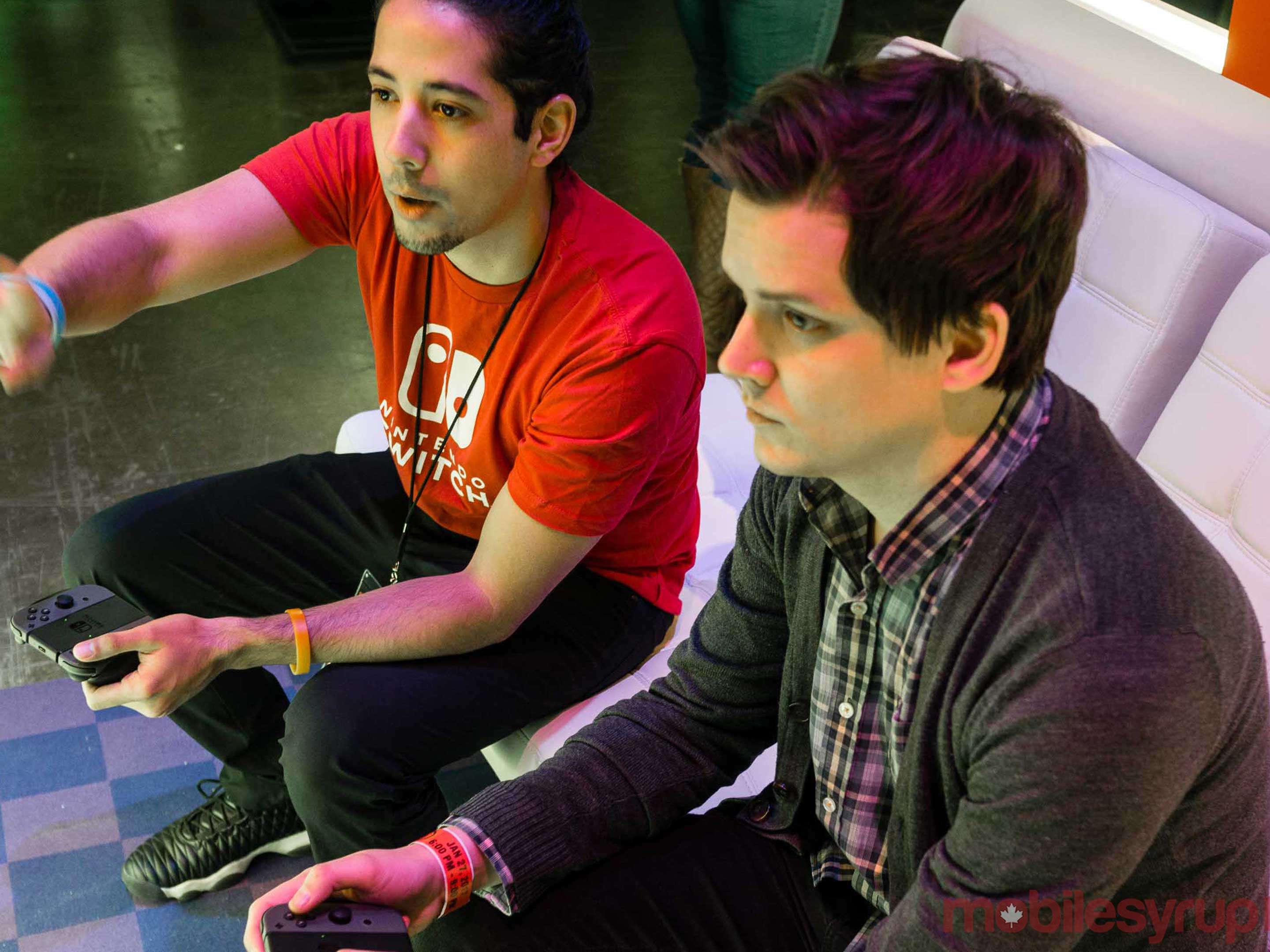 It’s quite possible more developers will start releasing games for the Switch in the coming months, and that many are waiting to officially reveal the titles they’re working on, but at the outset, third-party developer support for Nintendo’s new console is incredibly weak. 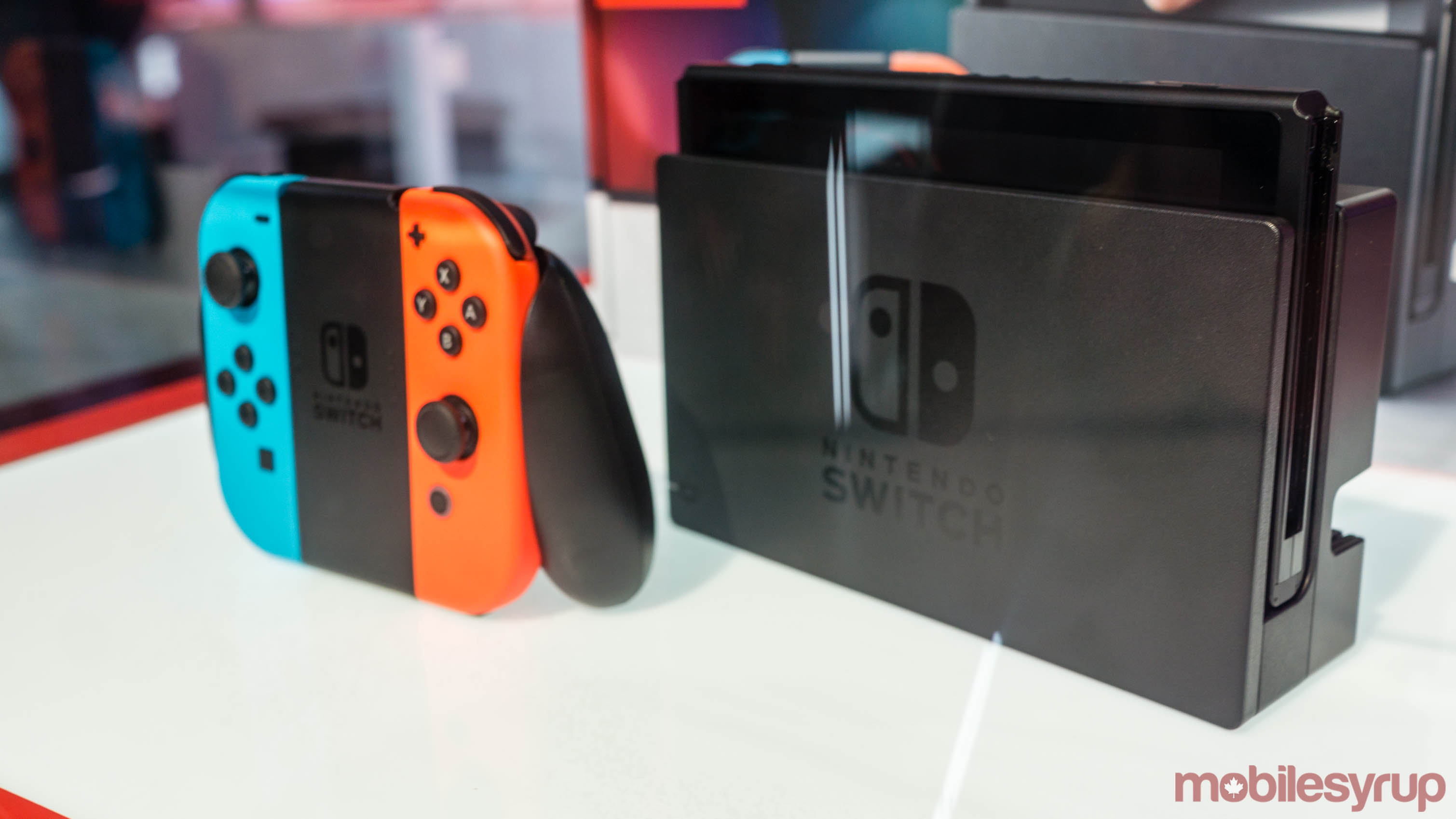 With all this said, I’m still holding out hope that the Switch evolves into a viable gaming device, and that upcoming games like the quirky looking Super Mario Odyssey and Xenoblade Chronicles 2, end up being spectacular. It’s also possible that given the unique nature of the Switch, it could become a haven for indie video game developers, similar to what the PlayStation Vita eventually evolved into in its twilight years.

With the device’s launch lineup turning out to be a disappointment, is the Switch’s $399 CAD asking price worth it right now? Probably not. I am, however, still holding out that against all odds, the Switch turns into the handheld- home console hybrid device I’ve always wanted. 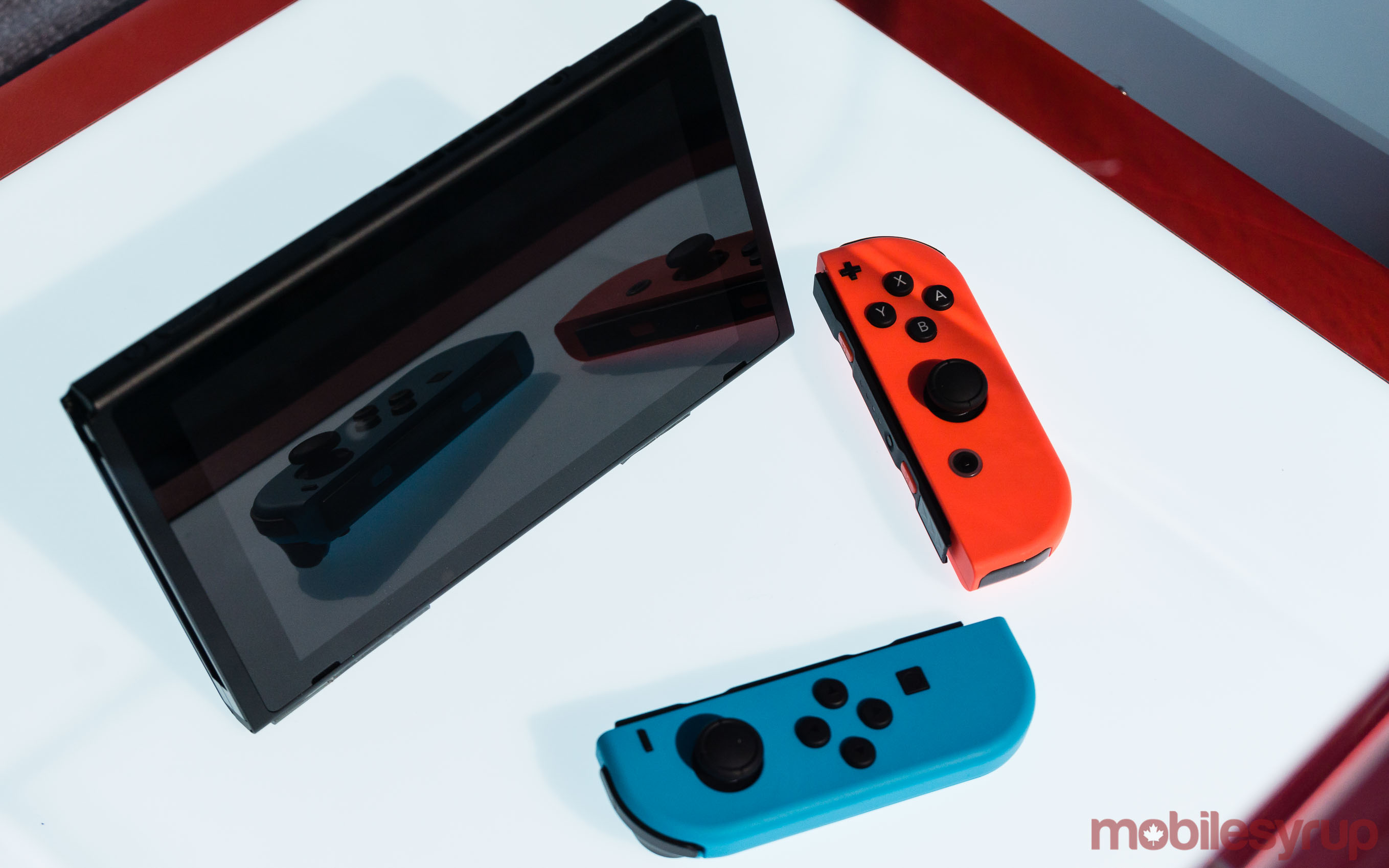 Just the idea of being able to wake up in the morning, play a game on my television before work, pop out the Switch and play the same game during my morning commute in a packed streetcar, is just too appealing for me to give up on so soon.

Nintendo’s Switch is set to release in Canada on March 3rd for $399.