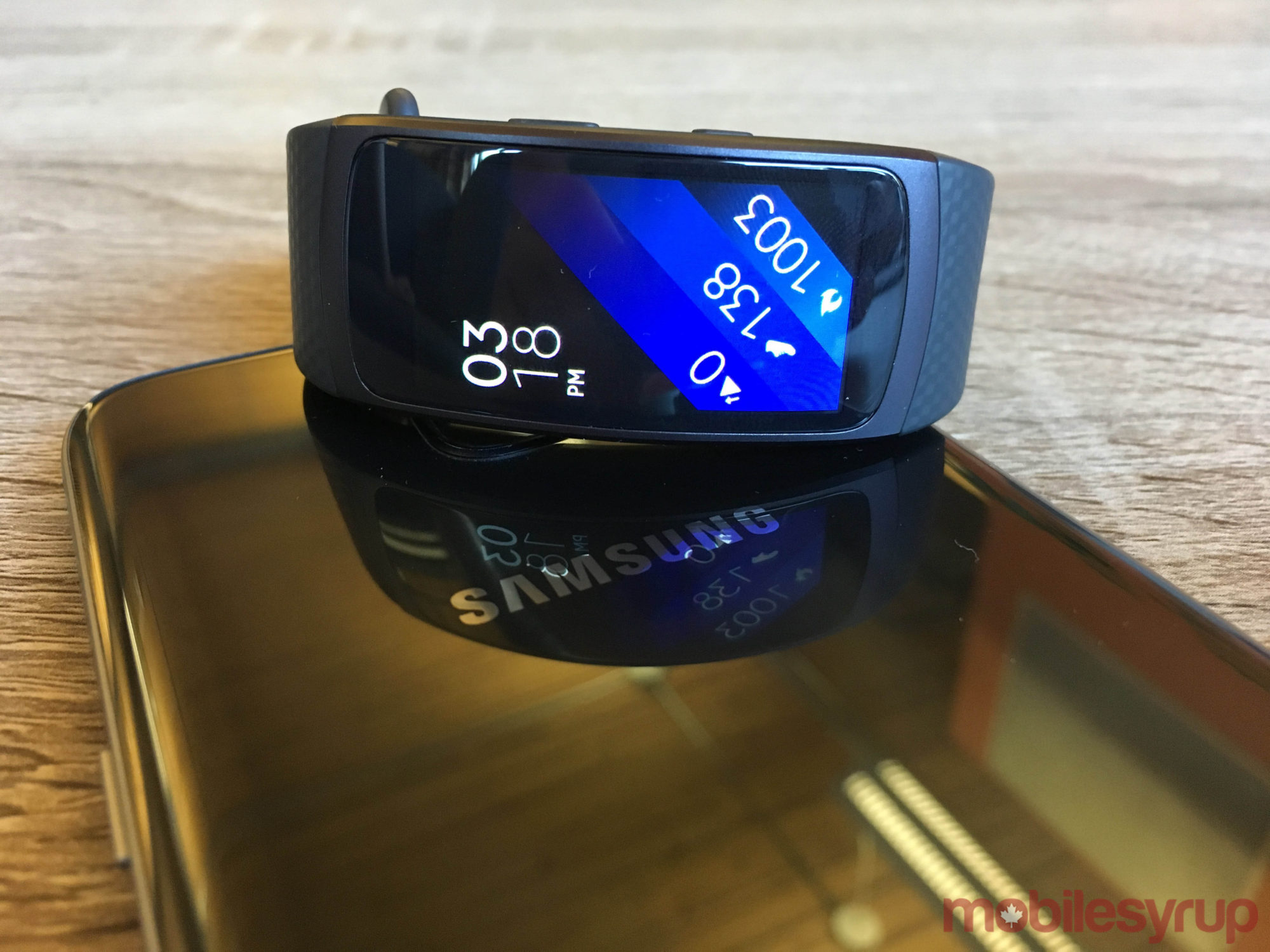 Samsung’s newest wearable, the Gear Fit 2, has snagged attention from those in the market for a fitness tracking smartwatch with its 4GB of storage, onboard GPS and reasonable $250 CAD price point.

Could it be Samsung has another hit on its hands? I had get off the couch and buy some sneakers to find out.

The Fit2, which comes in blue, black and pink, is attractive for a fitness tracker – as long as you choose correctly between the two sizes, small for wrists 125-170mm and large for wrists 155-210mm. Unfortunately, MobileSyrup got a large, which is the reason why it looks bulky on my arm in the pictures featured in this review.

When worn on an appropriately sized wrist, as show below, the Fit2 looks relatively slim, with a perfectly flush screen. Unlike the Microsoft Band, which it highly resembles thanks to its long rectangular screen, the battery on this device is located behind the screen, not on the clasp where it might dig in to your wrist. In general, the Fit2 feels light and unobtrusive, so much so that I slept with it on when battery life allowed. 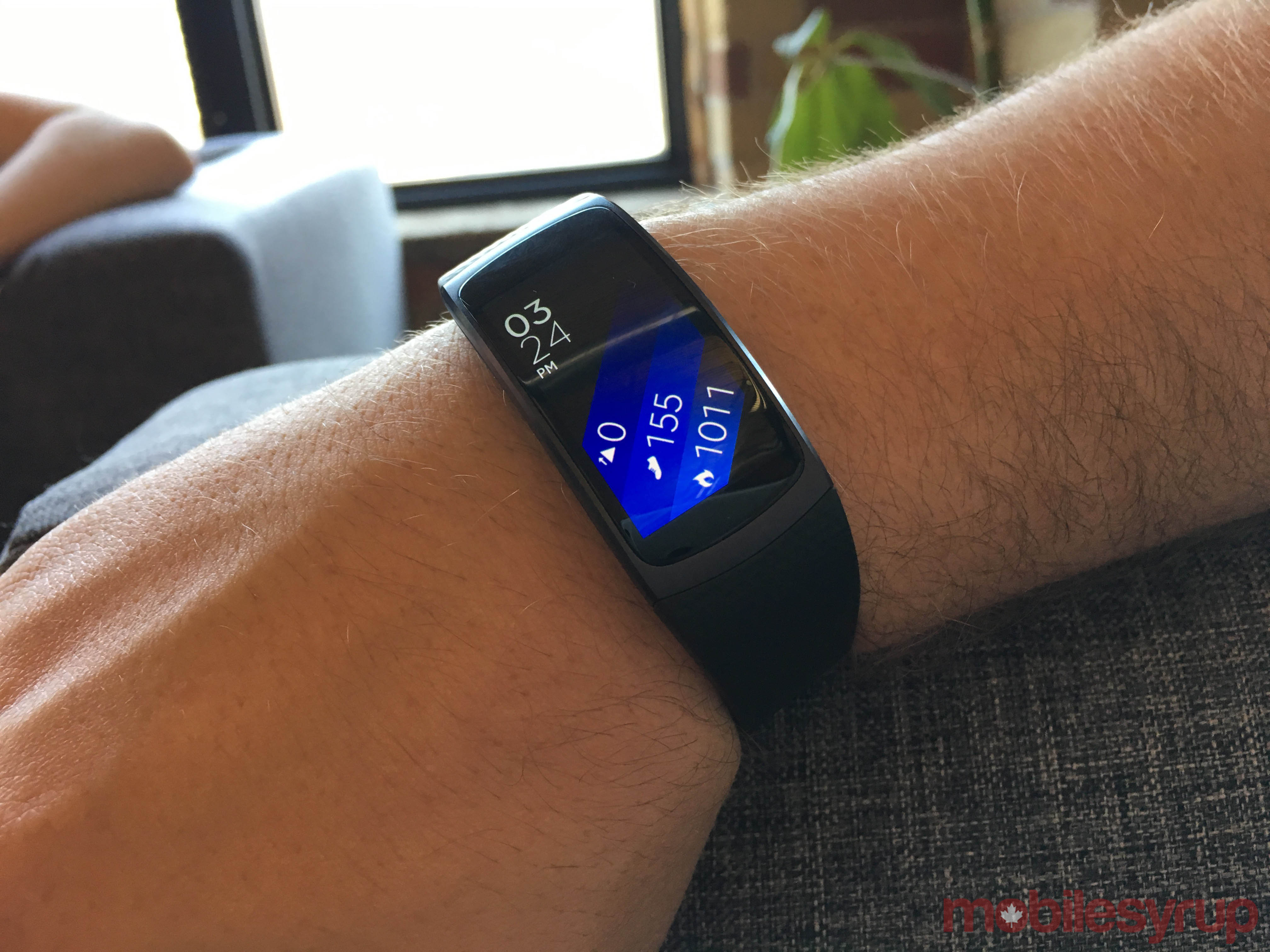 On the side of the band are two buttons, a back key and a home key. The larger leads you to the main watch and fitness summary screen, and the other takes to you a scroll-down menu of apps.

One slightly disappointing physical aspect of the Fit2 is its water resistance. The device is IP68 rated, meaning the wearable can be emerged in water up to 1.5 meters, and submerged for up to 30 minutes. Samsung’s own manual, however, explicitly says not to expose the device to water moving with force, and that it was only tested in water between 15 and 35 degrees celsius. That means taking the Fit2 in to a hot shower, my main interest when it comes to water resistance, is highly inadvisable. Rather, its upper limit is doing dishes and other activities with splash potential.

The Fit2’s 1.5-inch sAMOLED screen makes the display much crisper than I thought possible on such a small device. It was a pleasant surprise at first viewing, and makes the screen feel much larger when reading text or charts.

The screen is also super-responsive, even in corners. This adds to it feeling larger, because there are often multiple touch points in any given area that can be easily manipulated. 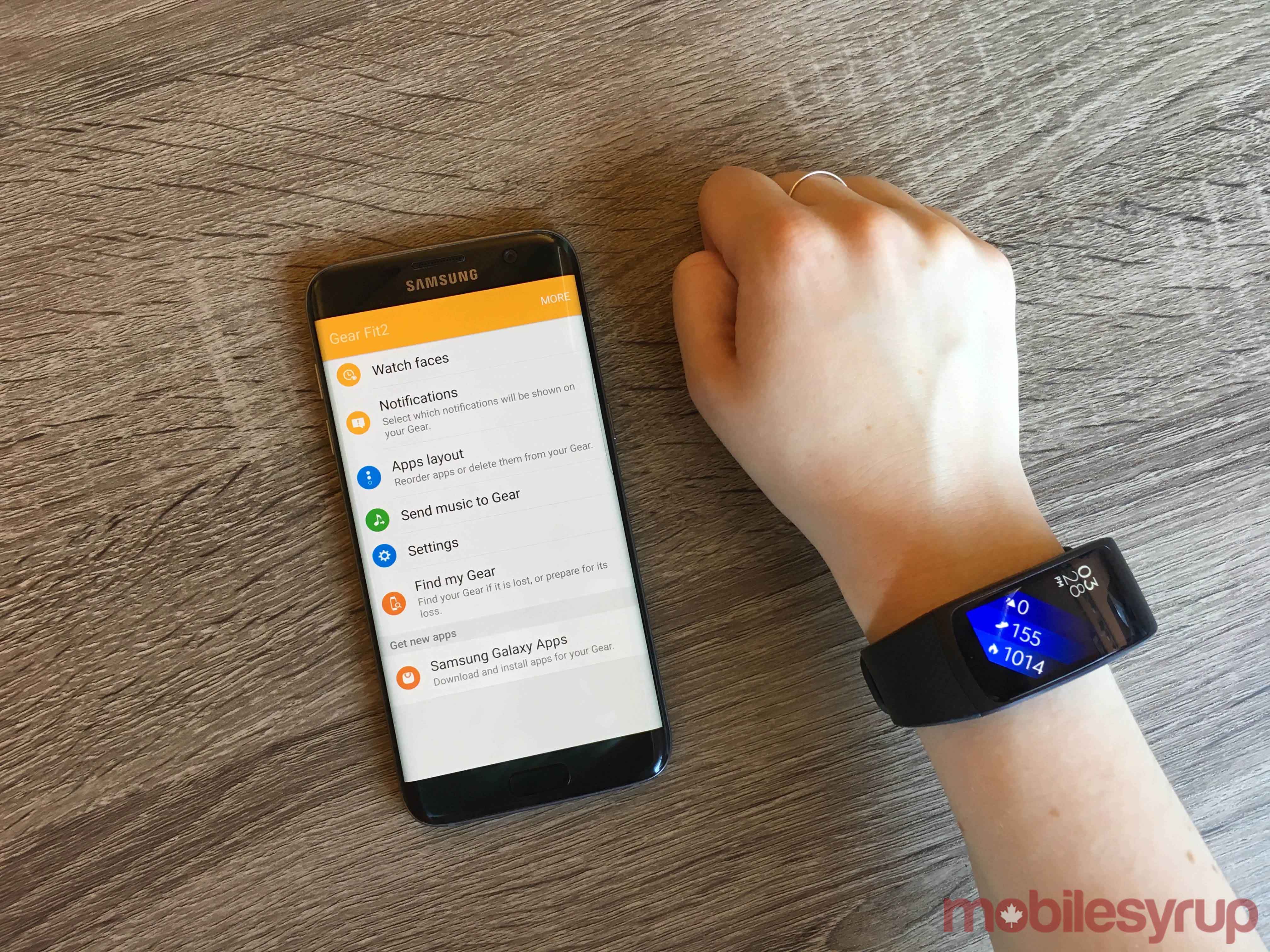 The Fit2’s operating system is Tizen, a departure from the Fit’s proprietary custom OS. While I mostly enjoyed the system’s design – apart from feeling that the preset watch faces were a little aggressively sporty for everyday use – I will say that I found it hard to get acquainted with all the devices’ functions during the first few days.

Performing some tasks just wasn’t intuitive. For instance, the fact that the smaller button launches the app menu when it’s on the main screen, but not when it’s on any other screen. After about a week with the device, however, I was fully at home with it, and found the system quite easy to navigate. 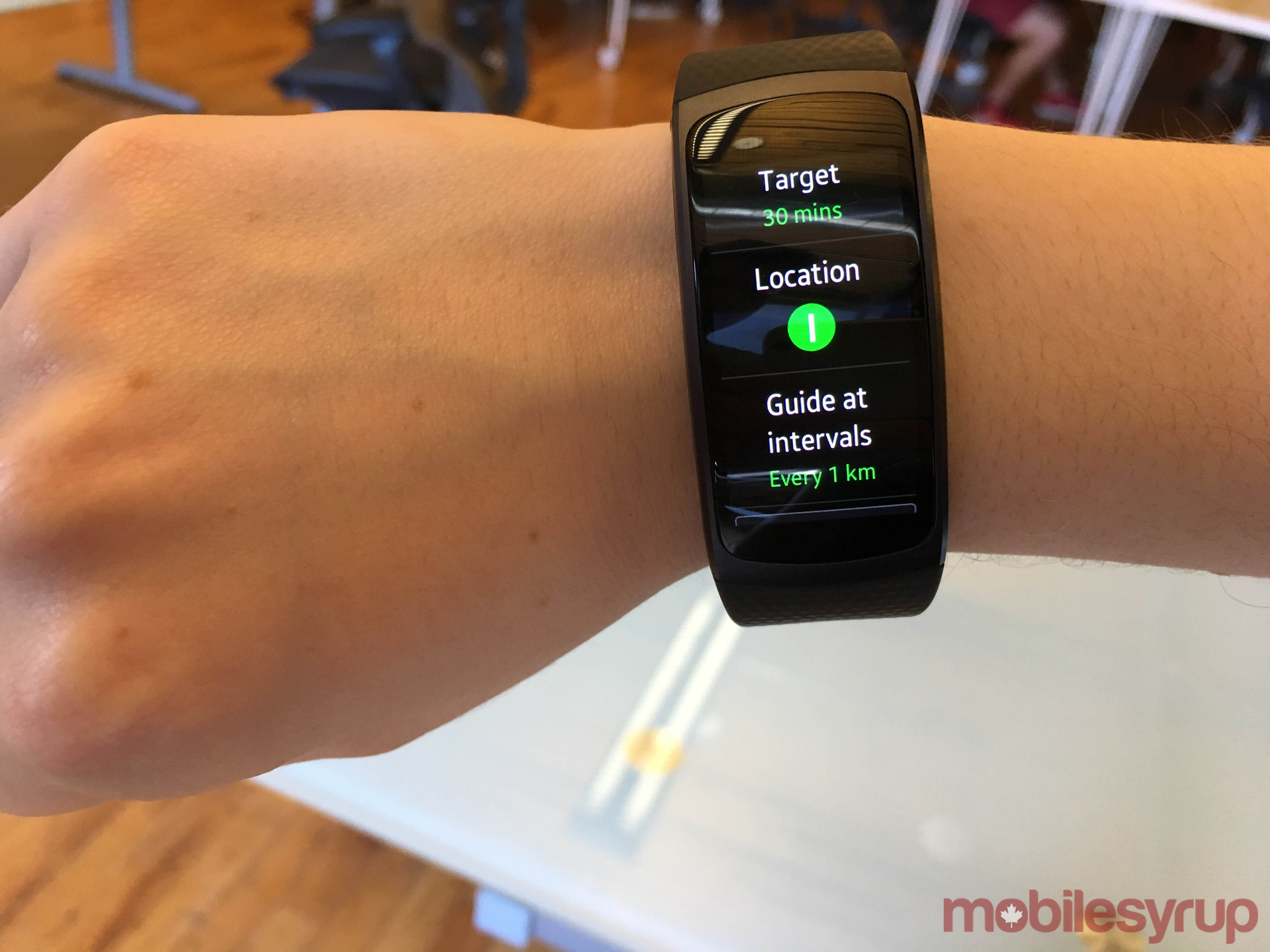 The watch pairs with the Gear Fit 2 app, available on any Android device running 4.4 or higher, but not, predictably, with an iPhone. Connecting the wearable to your phone via the Gear Fit 2 app allows you to wirelessly send music to the Fit2, which can store up to 1,000 songs courtesy of its 4GB of storage.

That feature, in connection with the on-board GPS, means you can go for a run without having to bring a bulky and expensive smartphone along for the ride. Unless of course, like me, you only use a music streaming service, like Apple Music or Spotify. 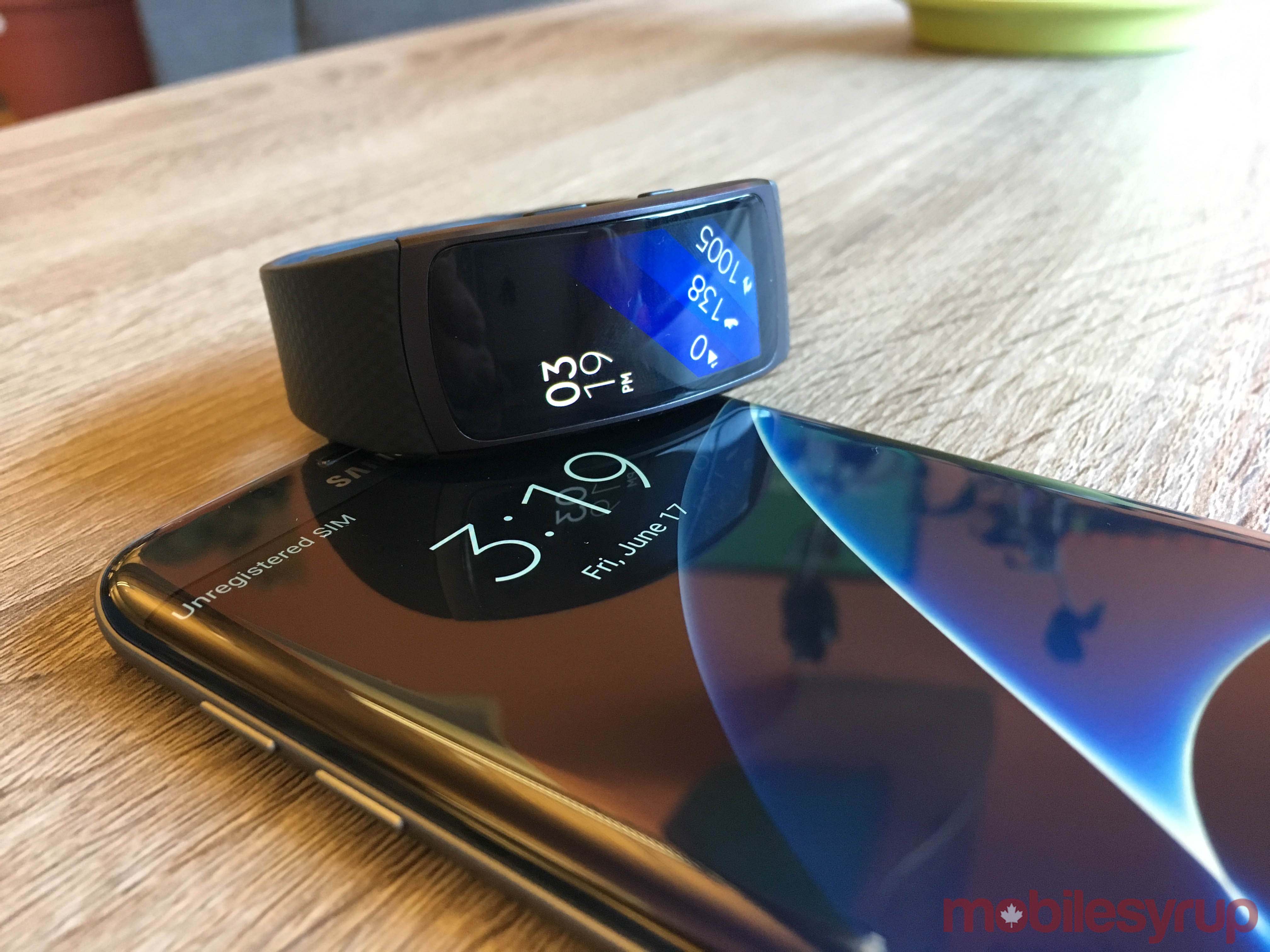 In that case, you can use the Fit2 as a remote of sorts for switching tracks and controlling volume. Connecting your Fit2 to your phone also allows for the use of of the handy Find my Gear/Find my Phone feature and notifications from apps like Gmail and Instagram.

You can also quickly fix up the settings and layout of the watch on a bigger screen, though the Fit2 is plenty responsive and detailed even by itself. Its 512MB of RAM and dual-core 1GHz processor were more than enough to keep it zipping along quickly. 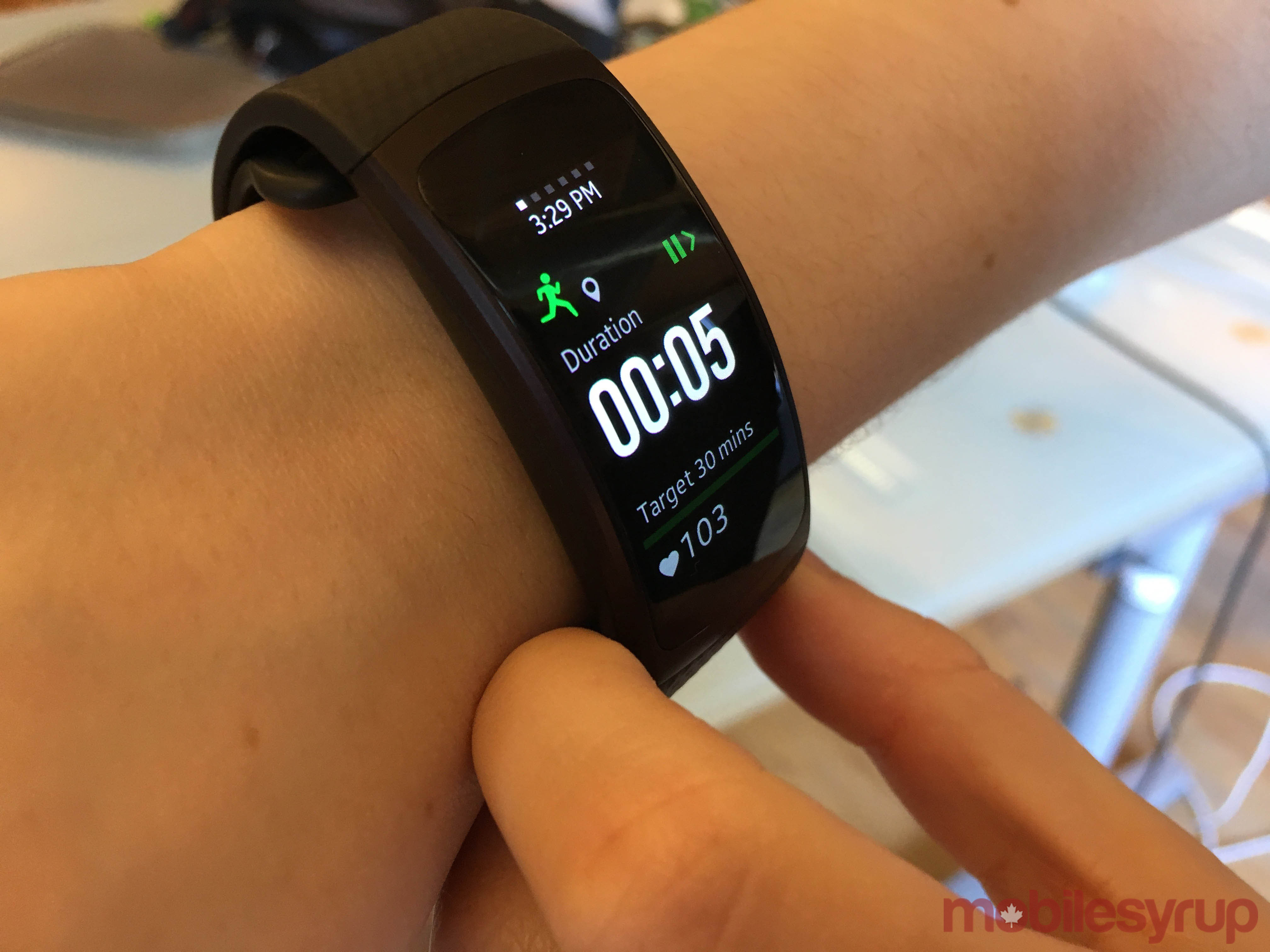 I had been steadfastly avoiding exercise for the past year or so I was surprised that the Fit2 played a substantial role in making me enjoy physical activity. I believe this change of heart was largely caused by the fitness tracking features, which gamified exercise in a way I never knew I needed.

One of the core screens is a section that shows how many calories you’ve burned in the day. Tapping in to it leads you to the 24-hour log, which shows a detailed timeline of your day and what you were doing at any given time, whether it be resting, light activity or exercise. 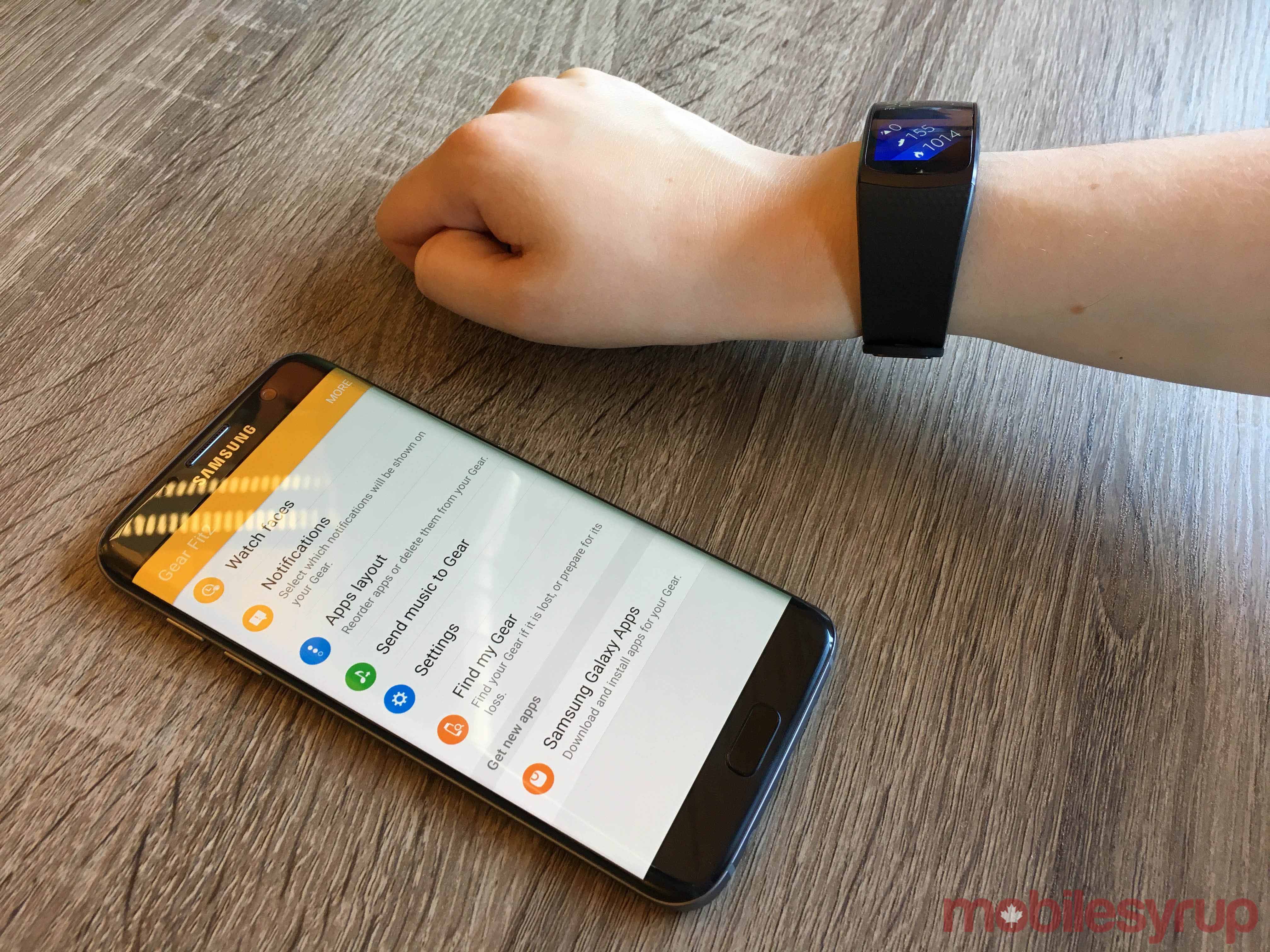 Then of course, there’s the activity screen, where you can pick an exercise to log, set a target and then start tracking. You can also choose to let the watch guide you at intervals, for instance, when running, you can get it to send a notice every time you’ve run a kilometre, something I found very encouraging.

Another interesting addition to my day was checking the heartbeat screen, which showed the most recent reading and the highs and lows over the past 24 hours. 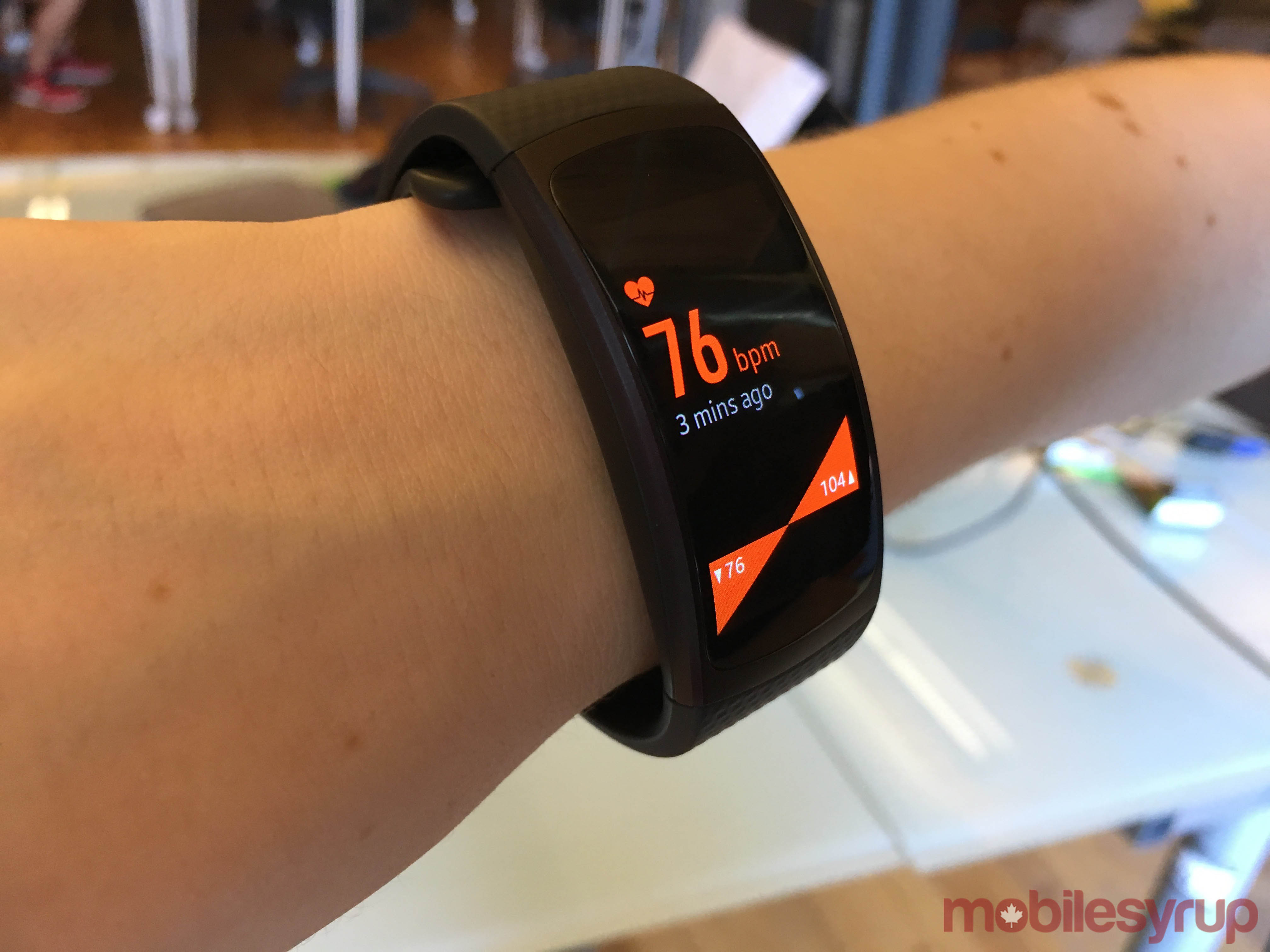 This fitness information is easily synched with Samsung’s S Health app, which can be downloaded on any Android. The app is an intuitive and simple look at the data gathered on the Fit2, with graphs for visualization, and adds some in-depth tracking widgets for sleep and food, as well.

There are some recommended third-party apps thrown in as well, like Nike+ Running, though admittedly not many. If you’d prefer an open system that’ll work with your pre-existing health apps, Fitbit may be more up your alley. For me it wasn’t an issue, because as mentioned before, I was a couch potato. 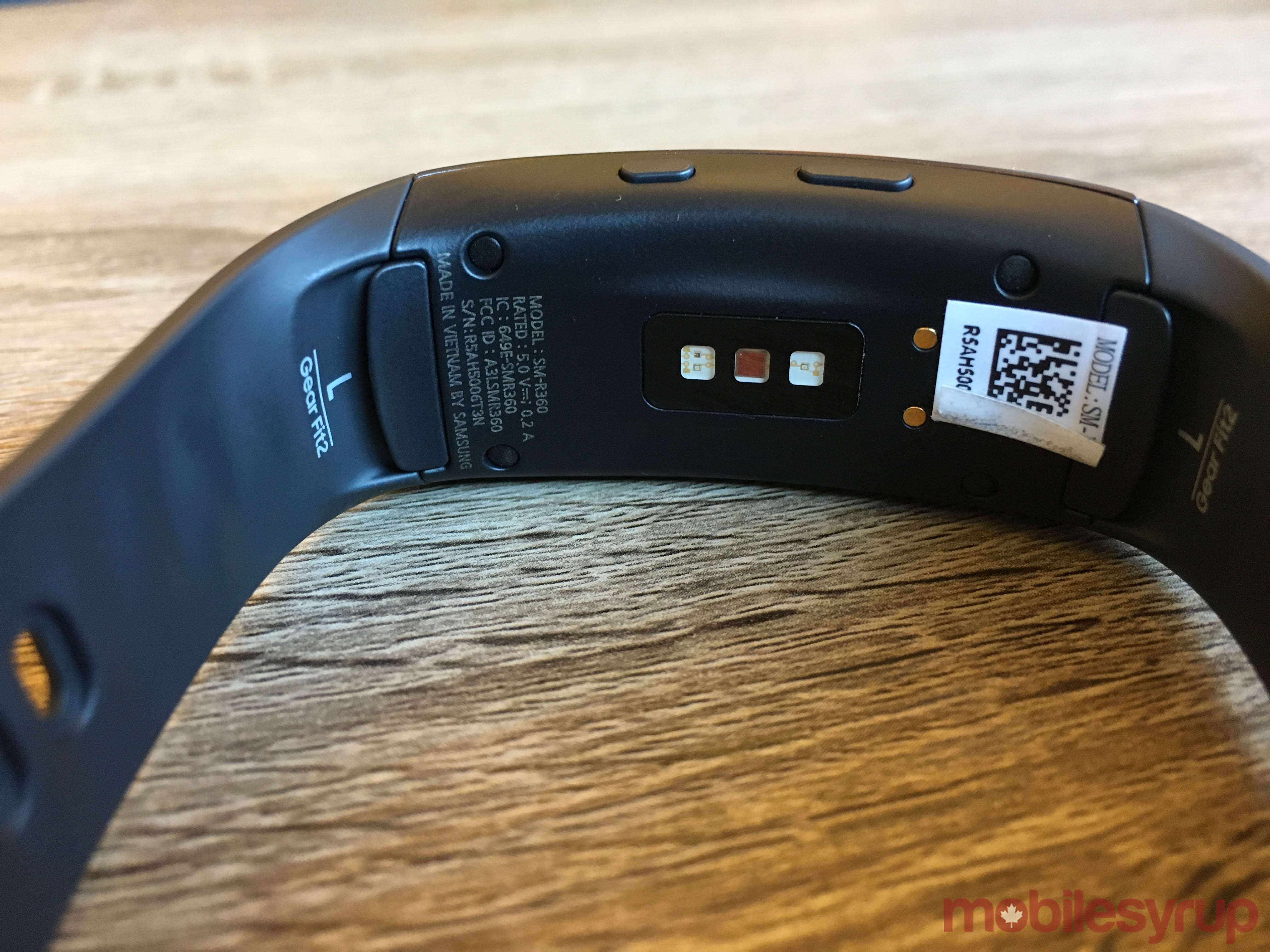 As for the accuracy of the tracking features, sometimes the Fit2 was a little slow to pick up on actions, for instance crunches, which was mildly irritating. It also often failed to capture my heart beat, potentially due to being too large for my wrist. It still picked up a fairly abundant level of information, however, all of which seemed accurate to me. 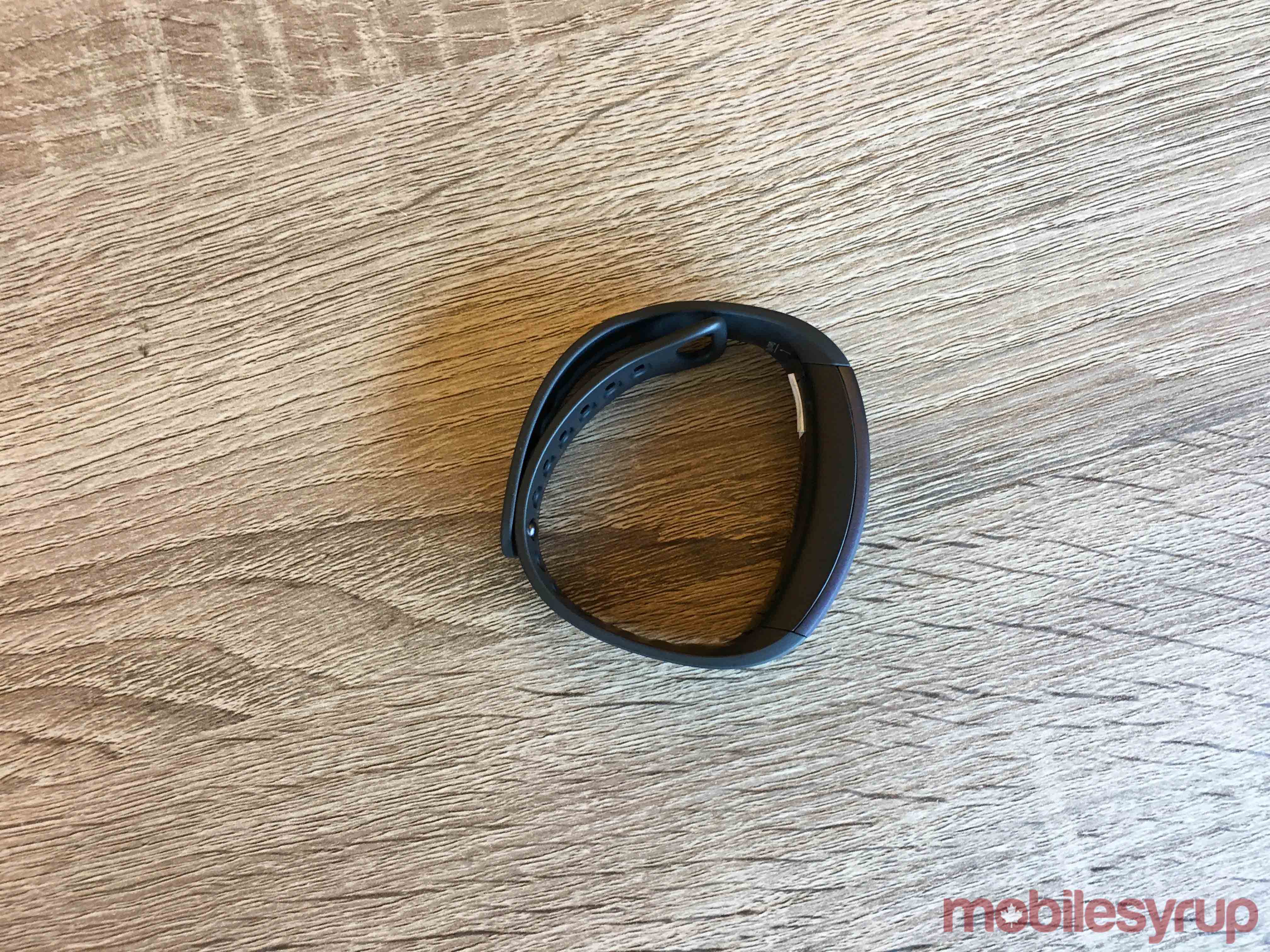 The 200mAh battery on the Gear Fit 2 allowed for over two days of moderate usage with GPS location tracking on, after which I was able to use it on power-saving mode for another 24 hours or so. The power saving mode restricts you to one screen showing all the essentials: time, steps, floors and calories. It’s not quite the three to four days Samsung promises, but it’s a lot better than the previous wearable I’d been using, the Apple Watch.

The charging wasn’t as impressive as the battery life, but it was acceptable. It took over three hours to charge to full from dead on its wireless charging stand, which, it should be noted, is much better designed than the Apple Watch’s – sturdier and less easy to knock over.

Is it a contender? 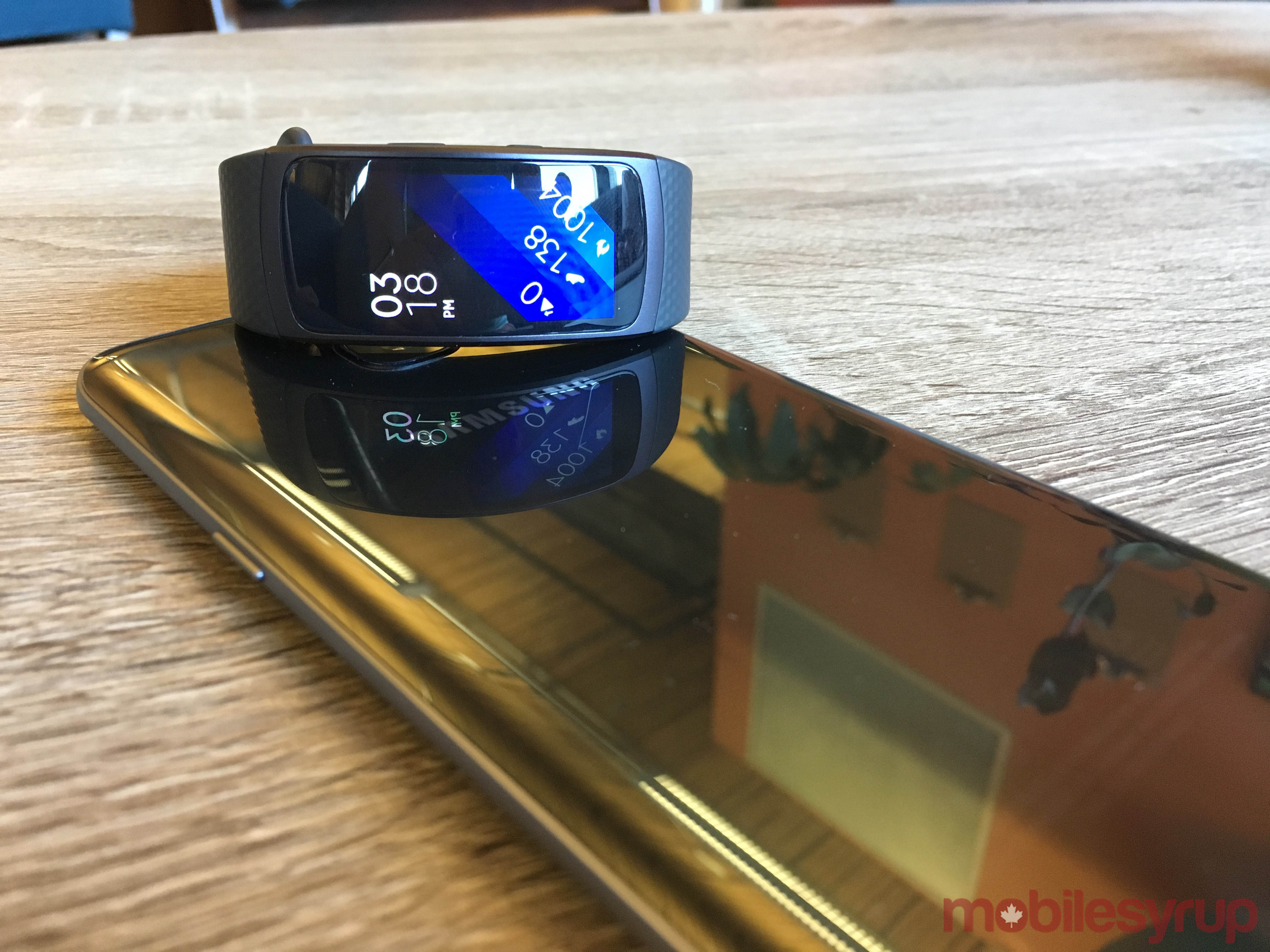 The Gear Fit 2 checks off pretty much every box when it comes to expectations for a good, inexpensive smartwatch. Decent battery life? Check. Comfortable band? Check. Zippy performance? Check. A wide range of fitness tracking sensors and apps? Check. Onboard GPS? check.

Plus, it does so while looking completely respectable – I would wear this to a fancy restaurant no question – and has the added bonus of internal storage, something which its most closely priced competitors, the Microsoft Band 2 and Fitbit Blaze, don’t feature. 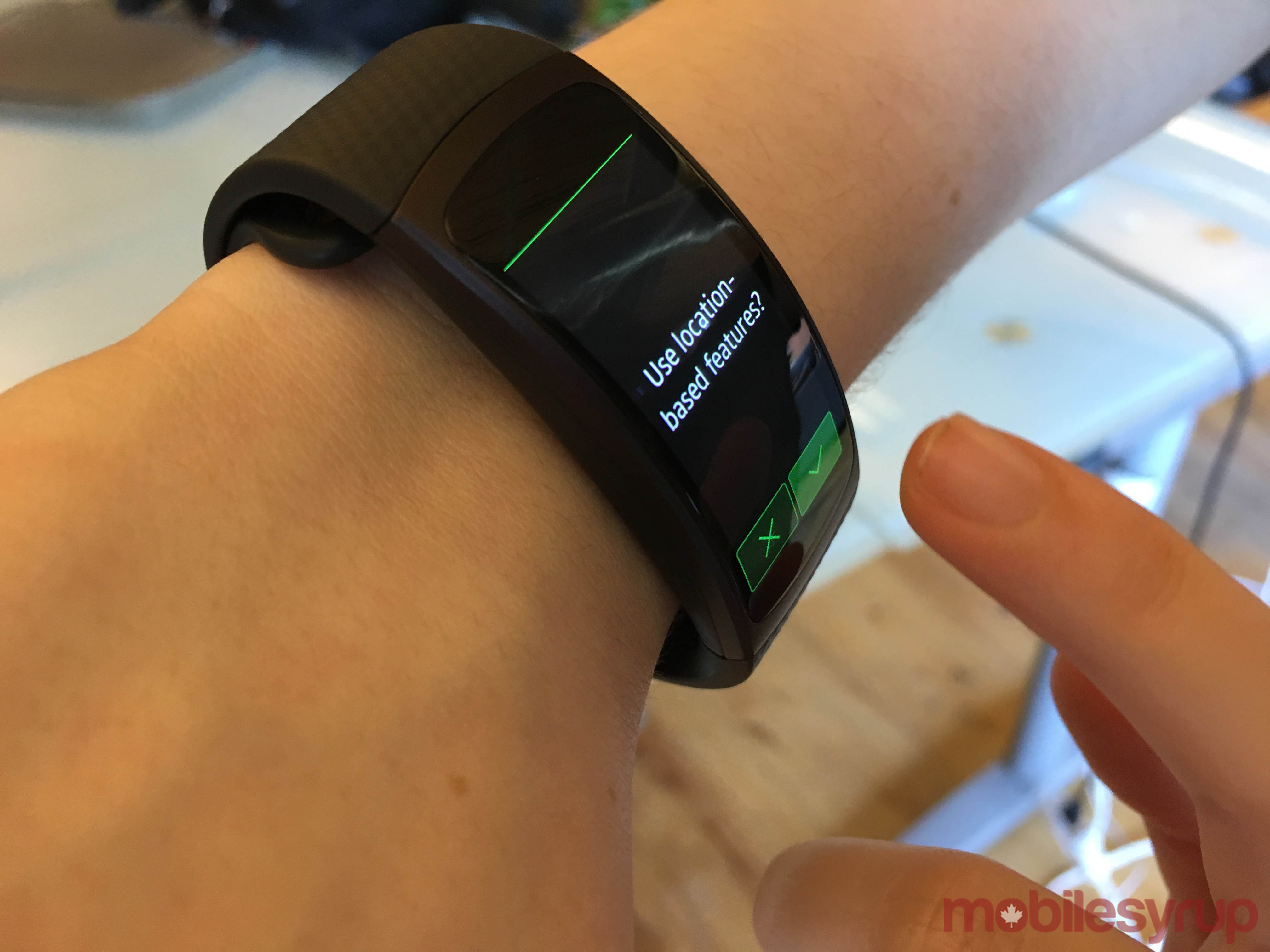 So, after putting buckets of sweat in to this review (though thankfully no blood or tears), I have to give my recommendation to the wearable.

The Fit2 was a pleasure to wear, and a surprisingly capable device to boot. It wouldn’t necessarily be my recommendation for those looking for an all-purpose smartwatch, but if you need a little buddy on your arm cheering you on to get you off the couch, the Fit2 is a smart choice.