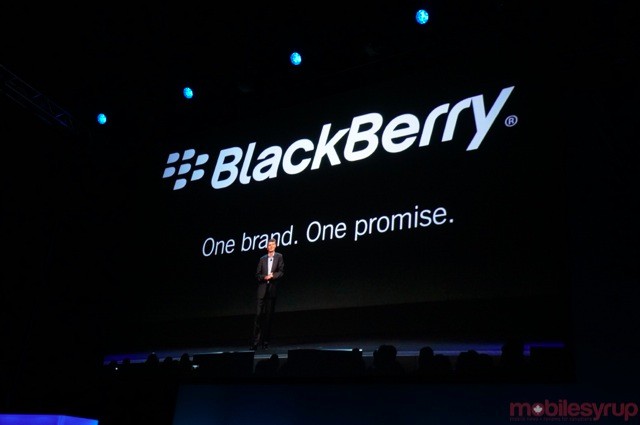 One has to give the man credit.

John Chen inherited BlackBerry one fiscal quarter away from a major financial battle and has since managed to, if not completely weather spiralling handset sales, in the process spreading the company’s assets across multiple sectors.

During BlackBerry’s annual general meeting, Chen announced that the company generated revenue of $2.2 billion this fiscal year with software comprising a $527 million share of that revenue. Chen also demonstrated thorough a slide show that the company had experienced a 113 percent increase in growth year over year and with eight consecutive positive quarters. However, the company lost $0.19 per share USD ($0.24 CAD) over the 2016 fiscal year.

The snippets of financial information that were provided to investors painted a rosy picture of a company that’s come to know loss as a factor of doing business. Chen referred sparingly to the company’s true financial performance other than with statements like “revenue is going down, so we just have to try hard to cover the decline.”

While handsets continue to dwindle behind the company’s other assets, it’s clear that Chen refuses to give up the fight.

“We need to make the device business profitable,” said Chen to BlackBerry investors during the company’s annual general meeting. He insists that the handset business is the number one objective for the coming fiscal year.

While he admits that revenue continues to decline, he also describes a shift in company philosophy that might be its saving grace. With Chen at the helm, BlackBerry continues to shift the majority of its resources to software.

While its handsets still trail the bottom line of global smartphone sales, BlackBerry software is the reason why several governments and large corporations continue to rely on it. Chen continues by saying that the company will attempt to grow its software revenue by 30 percent this fiscal year.

BlackBerry is not the same company is was as little as five years ago. While once a leader in the smartphone market, BlackBerry was all but elbowed out of place by Apple and Samsung as well as other players beginning as early as 2010. Since then, the company hasn’t been able to recover.

In the attempts to do just that however, BlackBerry is currently investing in several sectors which include but aren’t limited to healthcare, autonomous cars, IoT, government and enterprise – all which capitalize on the one thing BlackBerry still leads in – security.

This makes logical sense, seeing as software sales have significantly jumped while the Canadian company’s last few product releases, leading up to the disappointing results of its first Android-powered device, the Priv, haven’t done as well as they needed to.

Chen seems genuinely hopeful that these investments will turn things around and insists that while the company “isn’t out of the woods just yet,” they have generated enough money to prop itself up for at least a little while longer.

“The company is no longer in a position of having cash trouble. We have enough for a long time, We’ve invested almost a billion in the last 18 months in acquiring technology channels,” he said.

For all of Chen’s optimism however, it’s impossible to dilute the escalating losses the company has experienced, emphasized even further towards the end of the meeting. Reuters analysts estimated that BlackBerry will will report a loss of $27 million, or seven cents a share to bustle a fourth quarter net loss of $238 million.

It was during the investor question period that many of BlackBerry’s core weaknesses were addressed, those which senior management would have preferred to leave inside the boardroom.

Chen was questioned about BlackBerry’s lack of marketing, forcing him to admit that the company simply couldn’t afford it. He was asked why retail stores, particularly in the United States, tend to discourage customers who go into the store looking for a BlackBerry. He reluctantly said that it’s probably easier for sales associates to sell something they’d want to use.

Shortly afterwards, the CEO was questioned about whether shareholders would be receiving a dividend anytime soon “in a show of good faith.” Again, he answered no, saying that right now the money could be diverted to more pressing matters.

However, part of his plan to lift the company out of its rut is to bring what’s still good about BlackBerry to all kinds of smartphones. One way he plans to do this is license BlackBerry’s renowned security software to other smartphones, which the company has already done with Microsoft Azure’s cloud platform.

Furthermore, BlackBerry seems to be place a lot of hope in Android-enabled phones.

Chen goes on to say that since 2011, the company has been losing market status, which prompted management to consider cross-platform strategies. This strategy can be observed in the release BBM apps for iOS and Android, and now through the release of a BlackBerry shell wrapped around Google’s operating system.

“We’re going to build the most secure android phone that the market can see,” said Chen.

Whether or not BlackBerry can pivot on its head is yet to be seen, though analysts are expecting the company to post another fiscal loss when it reports its results on Thursday. While Chen insists that the once-proud representative of Canadian mobile is on the mend, the frustration of shareholders suggests that he may be running out of time.