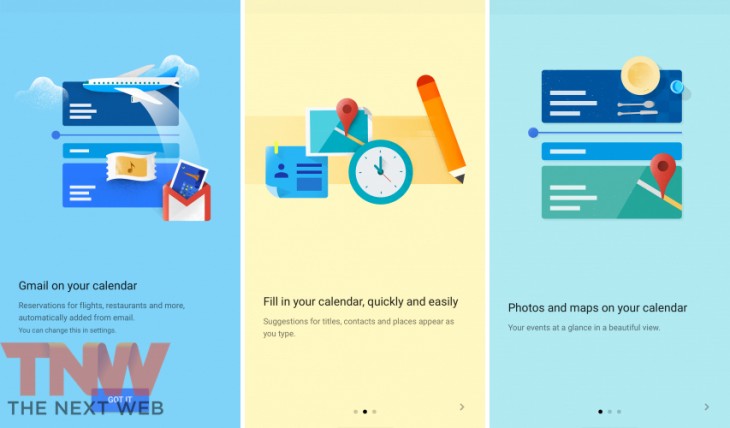 Google Calendar for iOS is getting a makeover and this week we’re afforded a sneak peak at what the app will look like when it finally hits the App Store.

The Next Web has been sent numerous screenshots of the new app as it looks today. Though there’s still a chance that it could change before it’s released, it looks pretty complete, so it’s likely the screenshots above and below represent what iOS users will see when they finally get a taste of a native Google Calendar app.

If you’ve used the latest version of Google Calendar for Android, the UI here will be very familiar to you. The Android version arrived a couple of months ago alongside the new Material Design Gmail application.

Like the Android version, your calendar will include maps and photos, and presumably relevant Gmail messages, on the appropriate days. It will also fill in birthdays from connected Google accounts so you’ll see those pop up in your calendar without having to add them. The iOS version of Google Calendar appears to use the same top-to-bottom scrolling to take you through each day of the week and your appointments in a list view. Keep scrolling and you’ll hit next week’s meetings, and then next month’s. A handy little calendar icon on the top right will take you back to present day if you travel too far into the future.

You’ll also be able to switch on and off connections to Gmail, Google+, Chrome, Google Drive, Google Docs, Google Sheets, Google Slides, Google Maps, Hangouts, and YouTube (note that you’ll have to have all of the above apps installed to connect them to your calendar).

No word on when we can expect Google Calendar in the App Store, but it surely can’t be long.