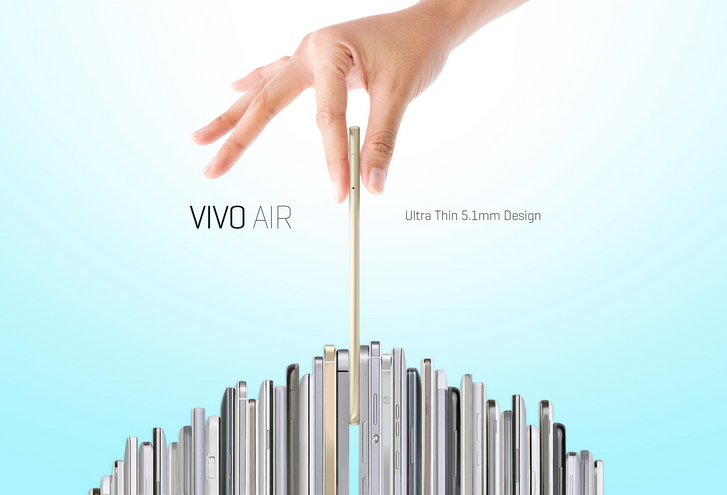 CES attracts companies from all over the world, a large number of them from Asia, but there’s a hefty amount of North American companies exhibiting at the show too. On Tuesday, Miami-based BLU announced a raft of new phones, some of which will hopefully make it to Canada.

None of these are flagship phones, but BLU is known for making  affordable, unlocked devices, so top-of-the-line just isn’t in their playbook. Today’s announcement brings word of seven new phones, including a second generation Life One, and a new Studio series. Of the seven, just two run on Qualcomm chips, the rest are based on MediaTek silicon. BLU is hoping that by offering such a vast number of devices, it’ll be able to cater to just about anyone in the market for a budget smartphone. 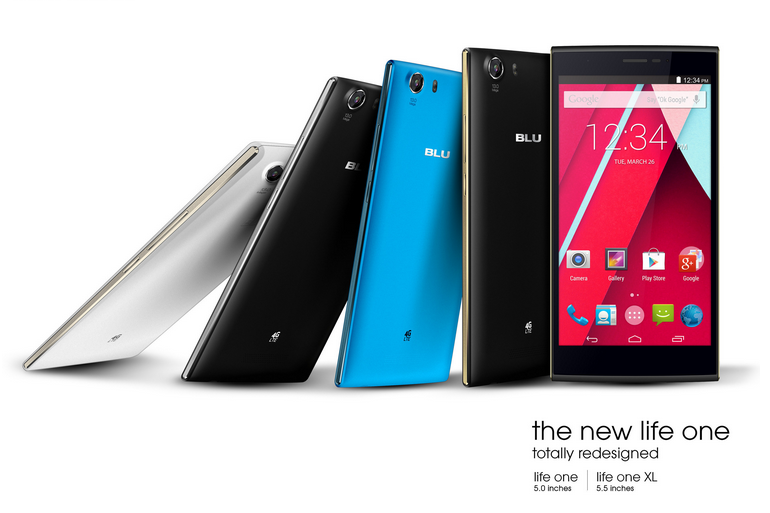 First up is the second-gen Life One which packs a 64-bit Snapdragon 410, 1GB of RAM, and 8GB of internal storage, There’s a 13MP camera in the back, a 5MP camera up front, and a 5-inch 720p display with Corning Gorilla Glass 3 on top. It’ll ship with KitKat but will be upgraded to Lollipop at some point. The battery is 2420mAh.

Next is the Life One XL, which is also based on the Snapdragon 410. It’s slightly larger at 5.5 inches and also has a 720 x 1280 pixel resolution with Gorilla Glass 3 protecting the display. Other than the size of the panel and a larger battery (2820mAh as opposed to 2420mAh), the Life One XL plans appears to be identical to the Life One. It’s got the same 1GB of RAM, 8GB of storage (both can be expanded to 64GB) and camera setup as its little brother. The Life One and Life One XL will be available in black, white, and gold, and will go on sale on Amazon at the end of March priced at $179.00 for the 5.0-inch Life One, and $199.00 for the 5.5-inch Life One XL. 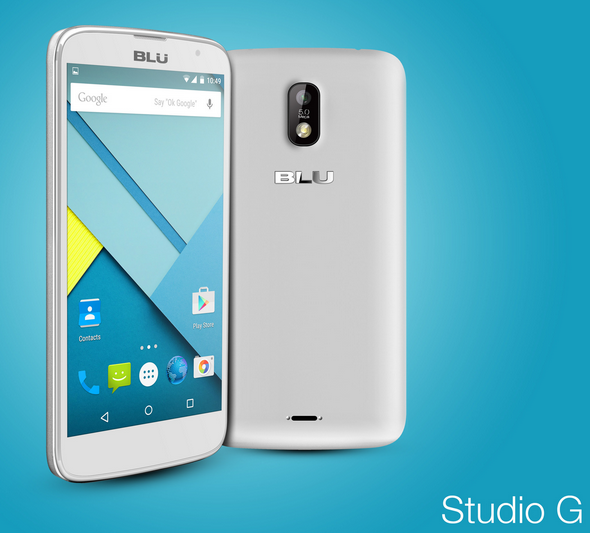 The Studio X, Studio G, Studio Energy, and Studio X Plus are all based on the MediaTek 6582 but the chip is clocked to different speeds in each device. The Studio G’s chip is clocked to 1.3 GHz and the phone packs 512MB of RAM, a 5MP camera in the back, a 2MP camera up front, 4GB of internal storage (expandable to 64GB) and a 5-inch 480 x 854 display. The phone’s battery is 2000mAh and it runs Android 4.4 and will be receiving KitKat. The Studio G is priced at $89 and will hit Amazon USA at the end of this month in black, white, blue, pink, and gold colours. 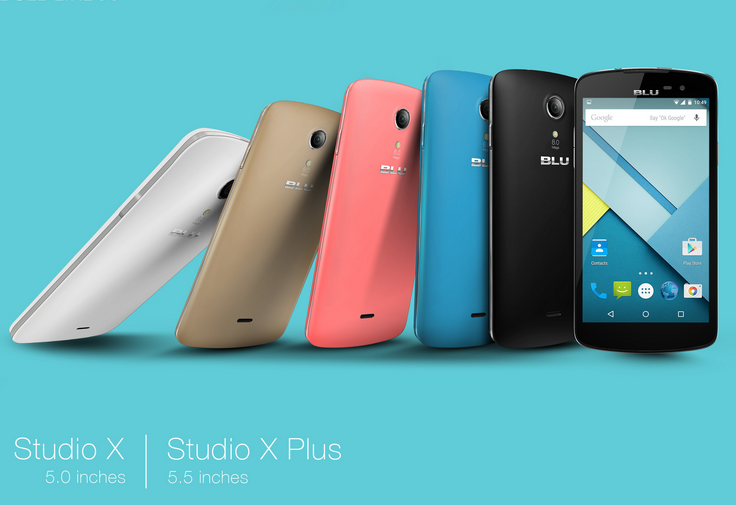 The Studio X is also a 5-inch phone but it has a higher resolution 720p display. It has a quad-core 1.3GHz CPU, 1GB of RAM, 8GN of storage (expandable to 64GB), an 8MP camera in the back, a 2MP camera up front, a 2100mAh battery, and Android 4.4 (upgradeable to Lollipop). The Studio X Plus is the same package with a 5.5-inch display and a larger 2600mAh battery. Both of these phones will come in five different colours (black, white, blue, pink and gold), and will go on sale end of January priced at $129.00 and $149.00 respectively. 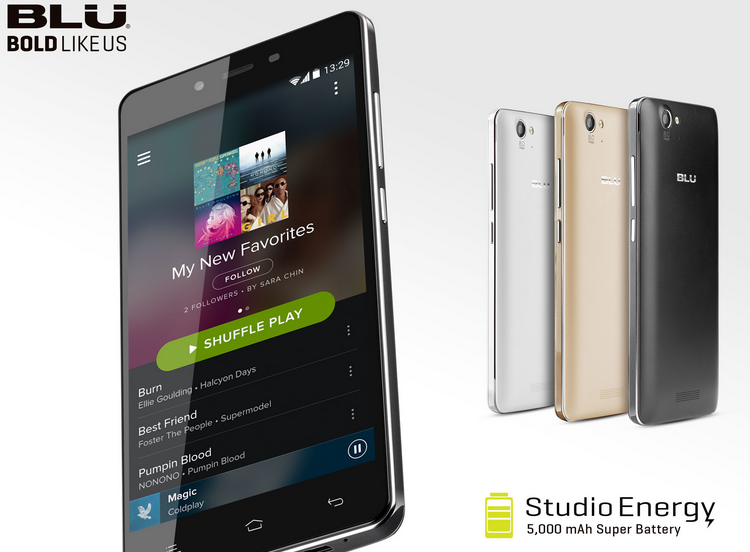 The Studio Energy is very similar to the Studio X but the hero feature of this phone is the battery, which checks in at 5000mAh. It is otherwise identical to the Studio X and Studio X Plus in terms of specs. On the outside, BLU promises premium build quality that packs the phone into a 5mm thick package. Standard usage will apparently net you four whole days of battery life. That might be a little unrealistic for anything beyond moderate smartphone users but you could probably easily get two days of use out of this device with heavier use. 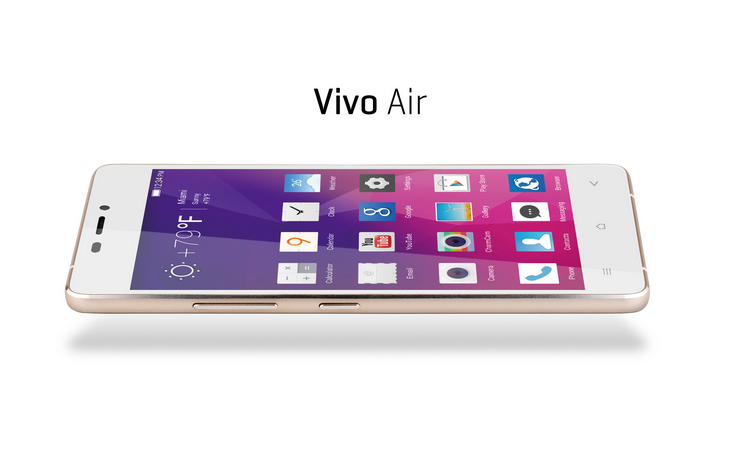 Lastly there’s the Vivo Air. The Vivo Air  packs an octa-core 1.7GHz CPU from MediaTek, Mali 450 graphics, 1GB of RAM 16GB of internal storage (no option of expansion, it seems), an 8MP camera in the back, a 5MP camera up front, a 4.8-inch 720p AMOLED display, a 2100mAh battery and Android 4.4. The Vivo Air is made from a solid block of aluminum magnesium alloy and weighs in at under 100g. The total package is just 5.1mm thick. BLU claims this is the thinnest and lightest smartphone available in the Americas. The Vivo Air will cost $199.00 when it launches later this month on Amazon. It will be available in white gold or black gun metal.

BLU doesn’t have a massive presence in Canada, but it does sell its phones via Amazon.ca, as well as Walmart and the Windows Store (for phones running Windows Phone, obviously). We’ll keep an eye out for the BLU booth here at CES and inquire about Canadian availability. Regardless, these phones are unlocked, so if you find yourself in the U.S., you can always buy it down there and bring it home.