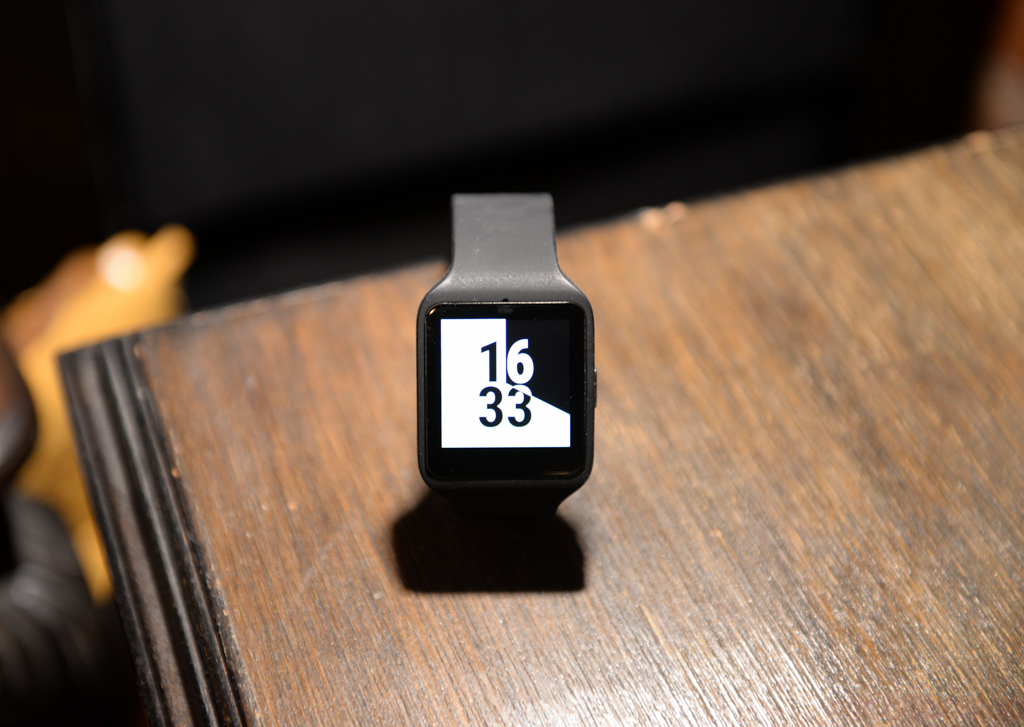 Now that Android Wear has been around for nearly six months, there are a number of good choices to pick from. But before doing so, I recommend asking yourself one question: why do you need a smartwatch?

Manufacturers like Sony have been in the smartwatch game for some time, but with their own proprietary software solution that, while based on Android, didn’t resonate with the average consumer. Android Wear, for all its quirks, requires little to no technical knowledge to set up: any notification sent to your smartphone will be mirrored on the watch by default.

Sony’s first Android Wear-based device has its fair share of problems, but it is among the best and most versatile currently on the market. Available on Google Play and at Sony itself, is it worth your money? Let’s explore. 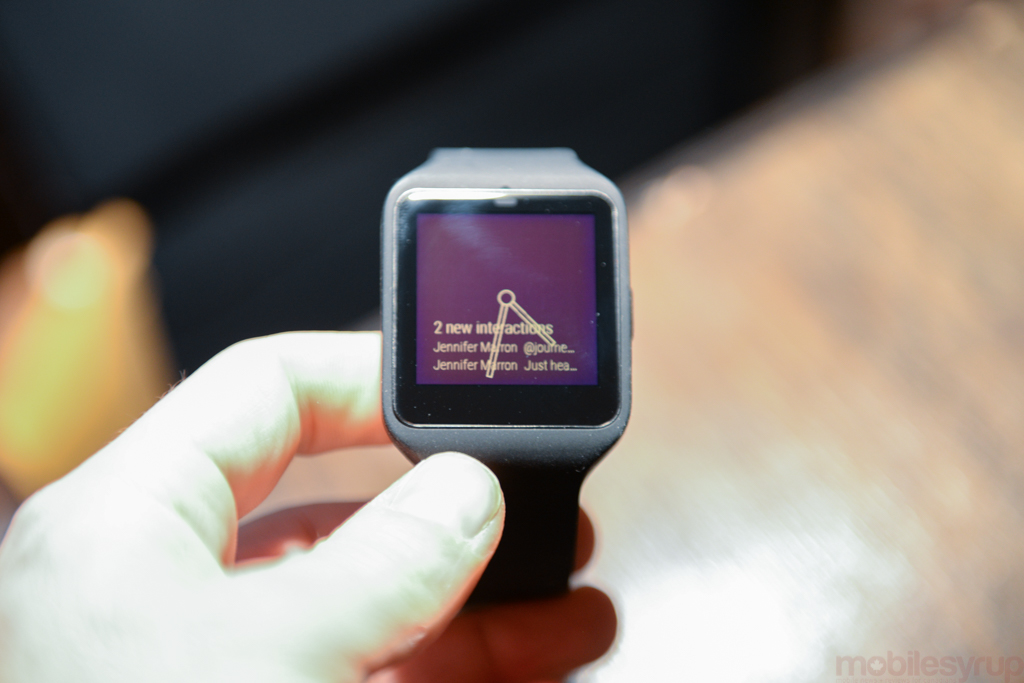 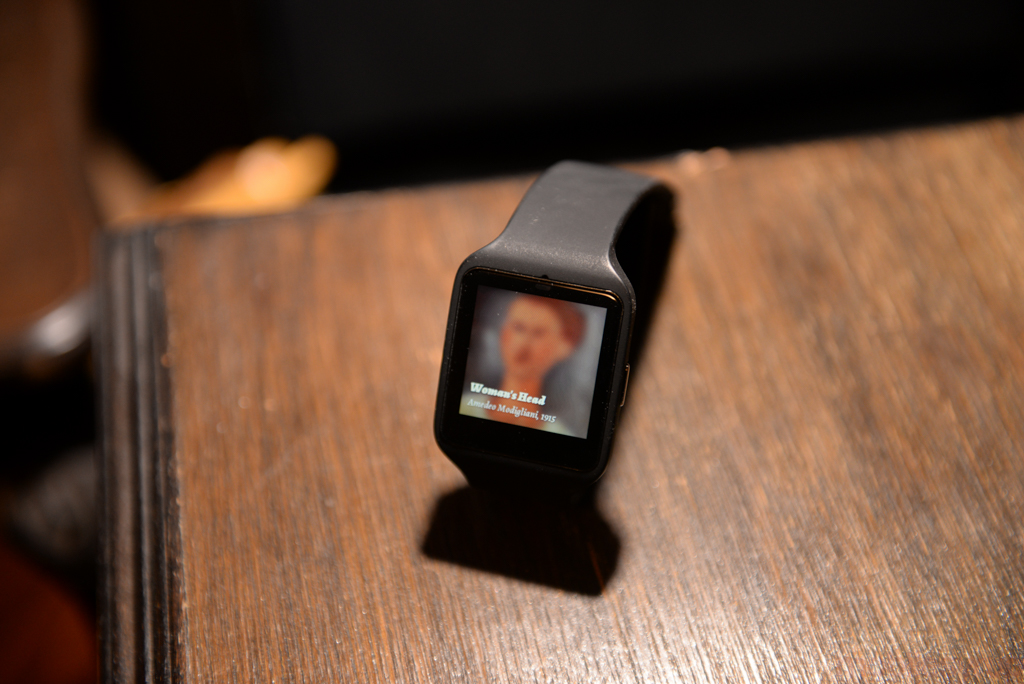 Let’s talk first about what the SmartWatch 3 doesn’t sport: a heart-rate monitor. The only one without this seemingly-essential feature, it sets the tone for a smartwatch that does almost everything differently than its competitors.

The SmartWatch 3 has a square face with a 1.6-inch 320 x 320 pixel display. It’s not a great display — a disappointment, really — but is certainly not problematic. Colours are well-rendered, though washed out when looked upon at any angle beyond dead-on. Sony fans will remember the same issues pervaded many of the company’s early Xperia smartphones, so it’s disappointing to realize Sony hasn’t learned its lesson, especially when competitors’ displays offer significantly higher fidelity.

The screen’s issues can likely be traced back to a technology called ‘Transflective TFT LCD’, which purportedly makes it easier to see in direct sunlight. Using a sheet of plastic over the glass, the backlight is less necessary in bright environments because the screen reflects the sunlight onto the LCD panel and emits it as natural light; only in dark environments does the backlight need to be turned up. This saves on battery life, obviously, but also has the benefit of making the screen seem more watch-like, more naturally bright, in sunlight.

Easily removed from its sports strap, the SmartWatch 3 doesn’t excite from an aesthetics perspective, but the ease at which one can change the strap, with multiple vivid colours available, make up for it. With an IP68 water resistance rating, it’s clear the accessory is aimed at the active among us (making the lack of a heart rate monitor even more vexing), buoyed by an internal GPS that eschews the need for a smartphone to track runs. The easily adjustable band reinforces that sports theme, with a clasp similar to most steel watches.

With a metal undercarriage, the chassis fits snugly into the rubberized watch band. Unlike the premium-feeling Horween leather of the Moto 360, Sony’s feels cheap, though certainly stain and weather-resistant as a result. It’s a worthy trade-off, but Sony is not going to win the hearts of the fashion-conscious with this one. 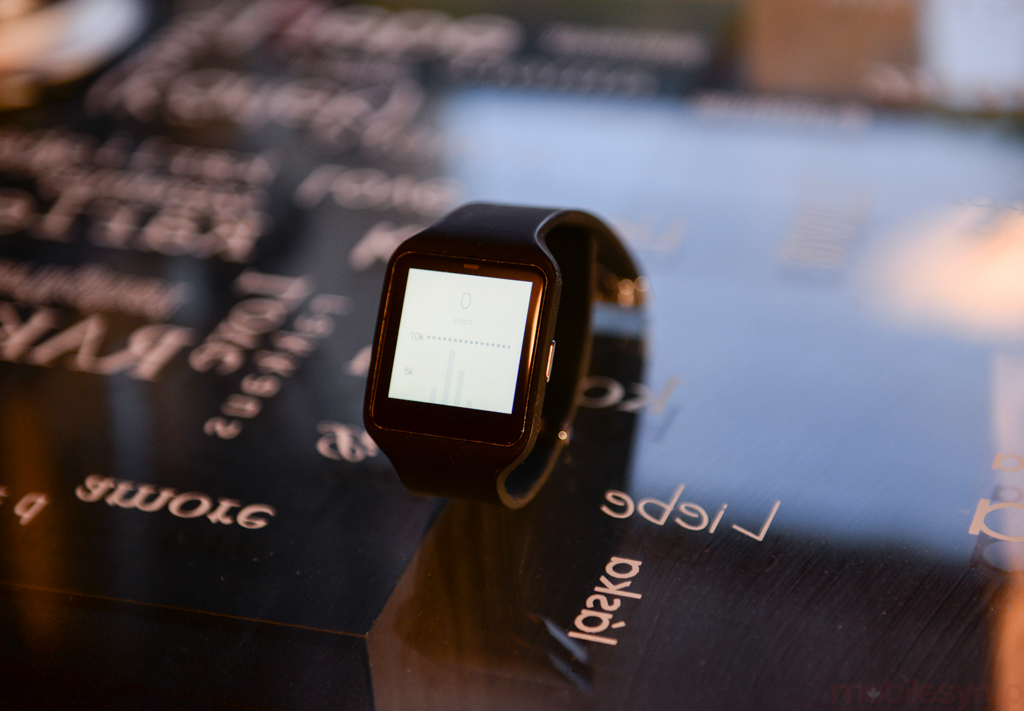 Android Wear, and smartwatches in general, still appeal to a niche market, and will continue to do so for some time. Therefore the idea of purchasing one is a different proposition altogether than a smartphone, which has graduated for most people from ‘want’ to ‘need’ (and, for some, ‘need all the time’).

While watches like the LG G Watch and Samsung Gear Live were the market’s guinea pigs, spurred by Google towards planned obsolescence, it was the release of the Moto 360 in September that opened peoples’ eyes to the notion that beauty and smart function could live harmoniously. Now, with the release of Android Wear 5, based on Lollipop, the platform has managed to iron out many of the issues that frustrated early adopters like me.

For starters, it’s now possible to permanently block an app’s notifications from the watch itself; just scroll to the right and tap ‘Block App’ and it is done. Previously, too much of the watch’s control scheme was dictated by the companion Android app, which has too been Material reDesigned and functionally overhauled for the new OS. 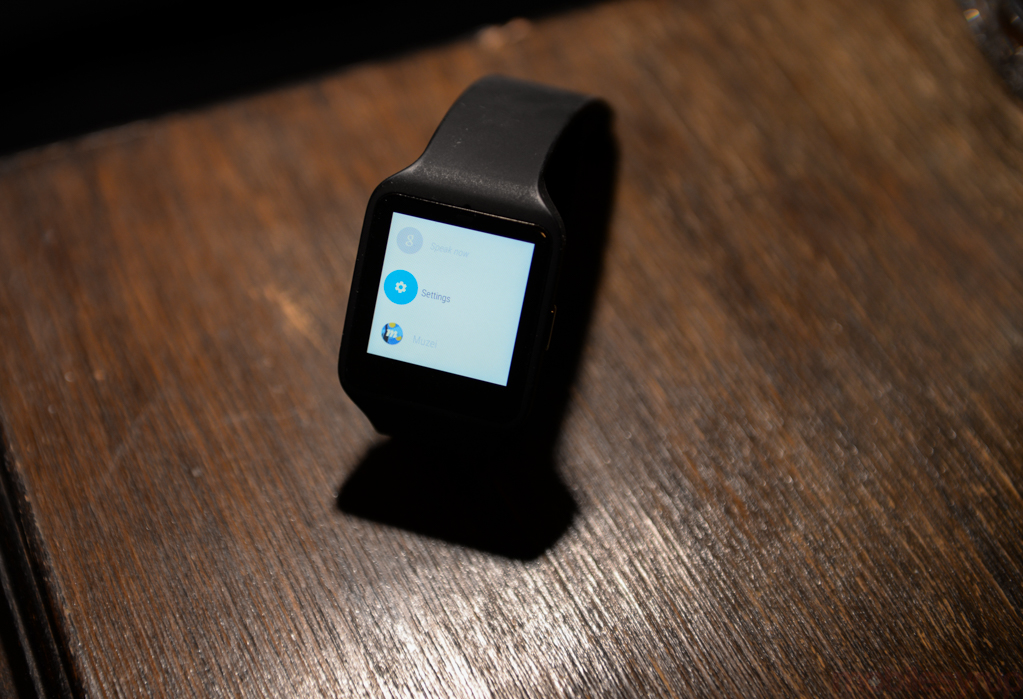 While the core hierarchical nature of Android Wear hasn’t changed in 5.0 (specifically, 5.0.1), it has received some much-needed refining. Android Wear 4.4.2 introduced the ability to hide the edge of a notification by swiping down on its from the watch face, but 5.0 adds the ability to undo dismissed notifications. Each notification sent from an attached smartphone will appear chronologically on the watch; swiping it away will, instead of dismissing it completely, leave a five-second window to undo the action, a convenience in light of hastiness. The issue still remains that it is too difficult to return to the top of a list from the bottom — there is no “zoomed out” view to see all notifications at once, like there is on Samsung’s Gear series or the Pebble smartwatch — but covering the watch face with one’s hand essentially resets the hierarchy by returning to ambient mode (a low-power form of the watch).

Most notifications, if they have tapped into the Android Wear SDK at all, allow for basic actions on the watch. For example, it’s possible to “Like” a Facebook Message or ‘Favourite’ a Tweet, while some apps, like Hangouts or Gmail, let users reply via voice. Google’s voice recognition continues to improve, but I rarely find myself in situations where such an input method trumps taking out my phone and tapping a written reply for convenience. Indeed, this continued insistence on voice as the de facto keyboard replacement for wearables feels like a temporary fix to a more fundamental problem of privacy. The only times I’d need to reply to a message with my voice are ones when doing so would inevitably lead to somebody overhearing it. 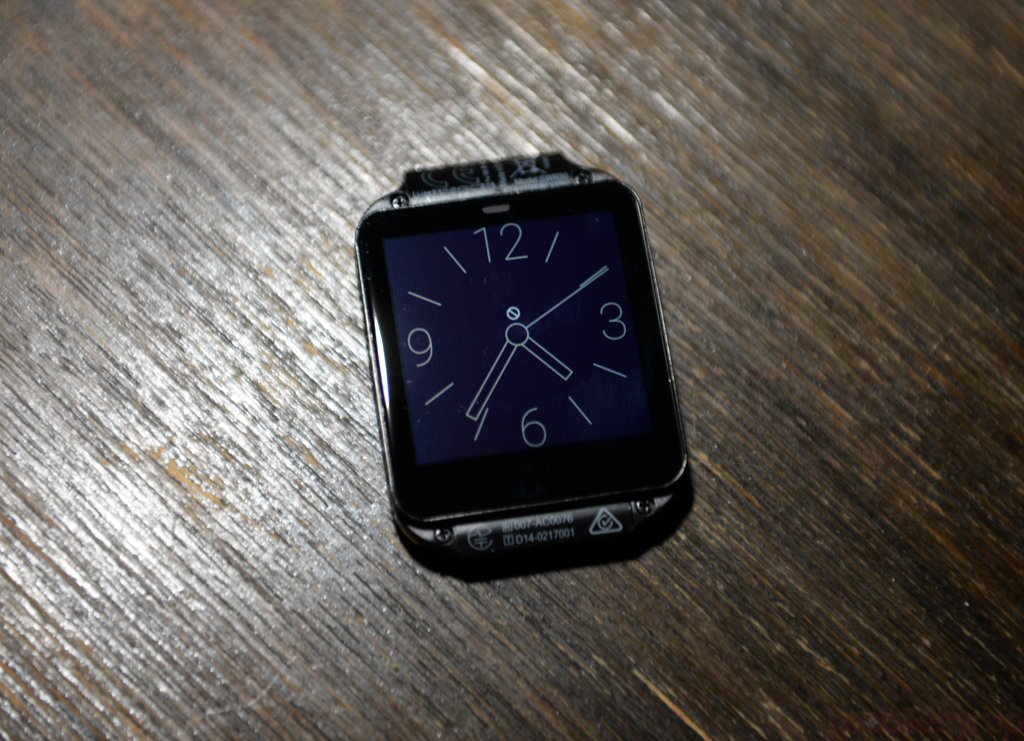 But the idea of using voice as an input method is not a problem unless you consider it one: I am looking forward to seeing how Google and its competitors continue evolving the idea of wearable input, or whether that even needs addressing. One could simply say that the types of messages one should be responding to with voice aren’t the kinds that need to be censored for the public. For me, it’s less about the content as the idea of normalizing speaking to one’s watch — it’s the same problem Siri, Apple’s voice-only personal assistant, has wrestled with for over three years.

Android Wear 5.0.1 improves access to many important settings that were either absent on KitKat, or hidden to the point of being useless. Previously, swiping down from the top of the watch face screen muted the smartwatch’s notifications. Now, users are given the option of receiving all notifications, priority notifications and none at all, including alarms. Users running Android 5.0 Lollipop on their smartphones will see these settings mirrored, too — KitKat users will still have independent controls. That means Nexus 6 users, for instance, will need to keep in mind that Do Not Disturb periods, when enabled, will be mirrored on the smartwatch. 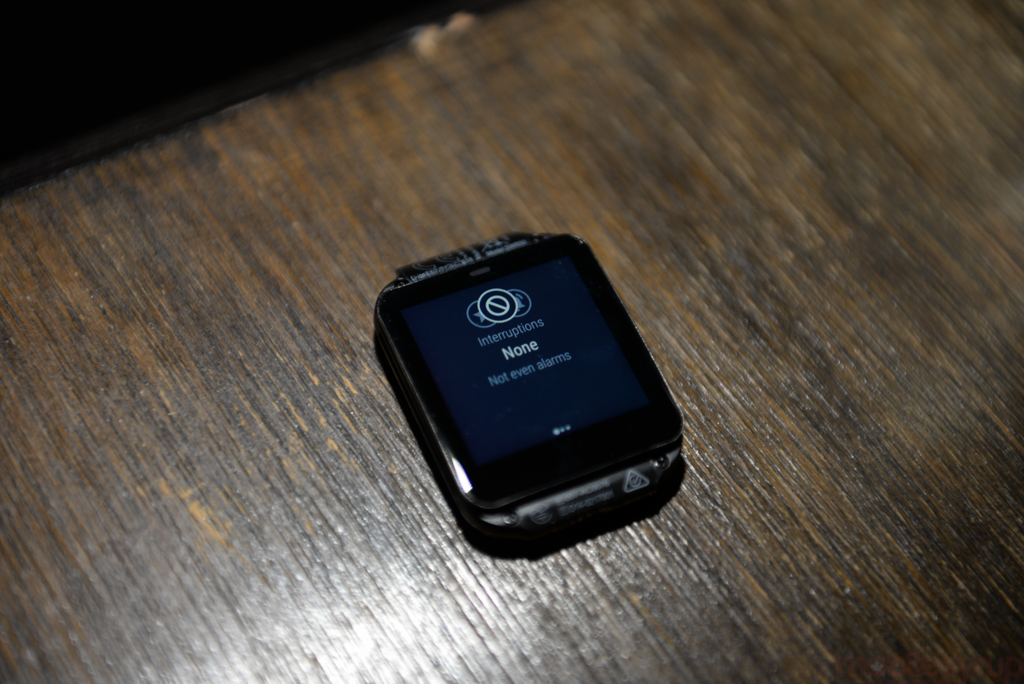 The SmartWatch 3 also has a new feature in that swipe-down menu: Theater Mode. Exactly what it sounds like, when enabled the watch will neither sound nor light up when receiving notifications, and Always-On Display will be disabled, making it necessary to manually hold the side power button to turn it off and check the screen. Though Theater Mode doesn’t replace the Mute functionality from KitKat, it’s now easy to permanently keep the screen off without worrying that it will light up at inopportune moments.

The other major innovation in Android Wear 5.0.1 is the addition of an official Watch Face API. While many existing unofficial downloads will work great on the SmartWatch 3, being able to download creative and Google-vetted designs completely changes the way I approach Android Wear. It’s not so much the fact that there were no great designs available previously, but no well-known brands were on board until now. Ustwo, the team behind the amazing Monument Valley game, emerged on day one, for example, with two beautiful watch face packs, all of which are worth trying. A couple of them, like Runway, use weather or calendar events to showcase the diversity of information available. Others, like Invert, have multiple colour options that can be cycled on the watch itself. 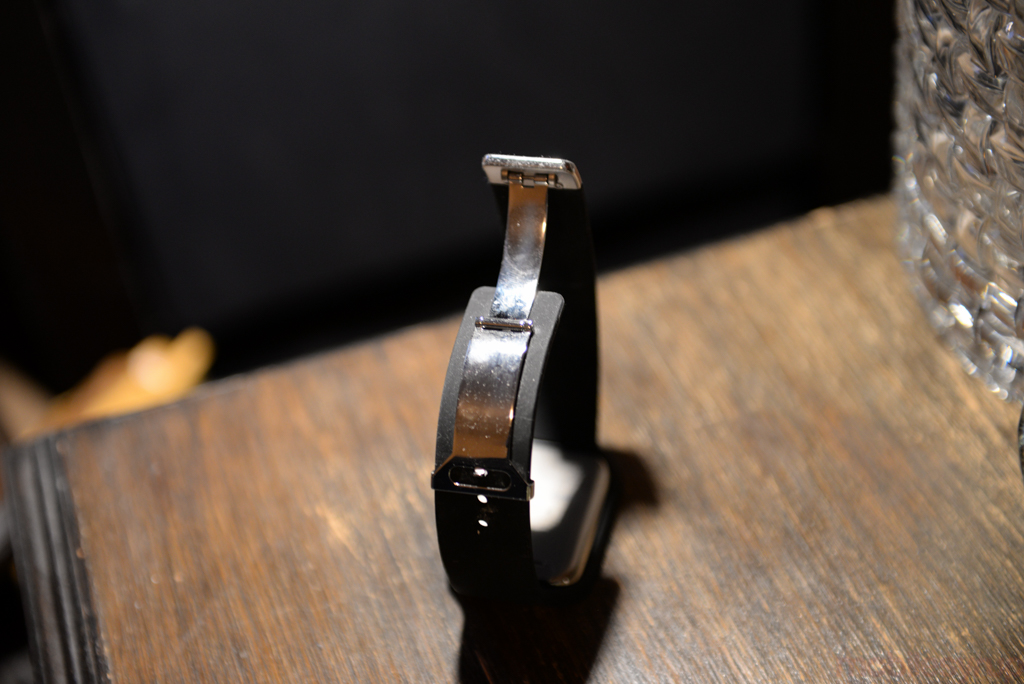 The app situation hasn’t changed much on Android Wear 5.0.1, but that’s not a mistake. Native apps are still a work in progress on wearables, because despite ample compute power, most of the work has to be done on the smartphone itself. The SmartWatch 3 has a unique feature to separate it from the pack, as its GPS allows users to track runs using apps like RunKeeper or Sony’s own pre-installed Lifelog. Couple that with the newly-introduced ability to transfer music to the 4GB of internal storage on the watch and you have the beginnings of a platform decoupled from the smartphone on which it so heavily relies on today. The process of beginning a run, using RunKeeper for example, is easy enough: scroll down to the app icon, buried inside the Start menu, tap ‘Begin run’ and, well, run. Once returned, the GPS coordinates will be uploaded to the app and synced with the cloud for further analysis.

Disappointing, especially after using fitness bands with smartwatch-like functions like the Basis Peak and Fitbit Surge, is the lack of continuous heart rate monitoring on the SmartWatch 3. Surely a feature being worked into its inevitable sequel, such functionality should become standard issue on a waterproof, fitness-focused device like this. Alas.

One thing I didn’t worry about with the SmartWatch 3, thanks to its 400mAh cell, was battery life. I used the accessory all day for two full days before deciding to charge it at 23%. That it uses a standard microUSB port to charge is even better, though removing the water-sealing silicon plug is more work than it should be. 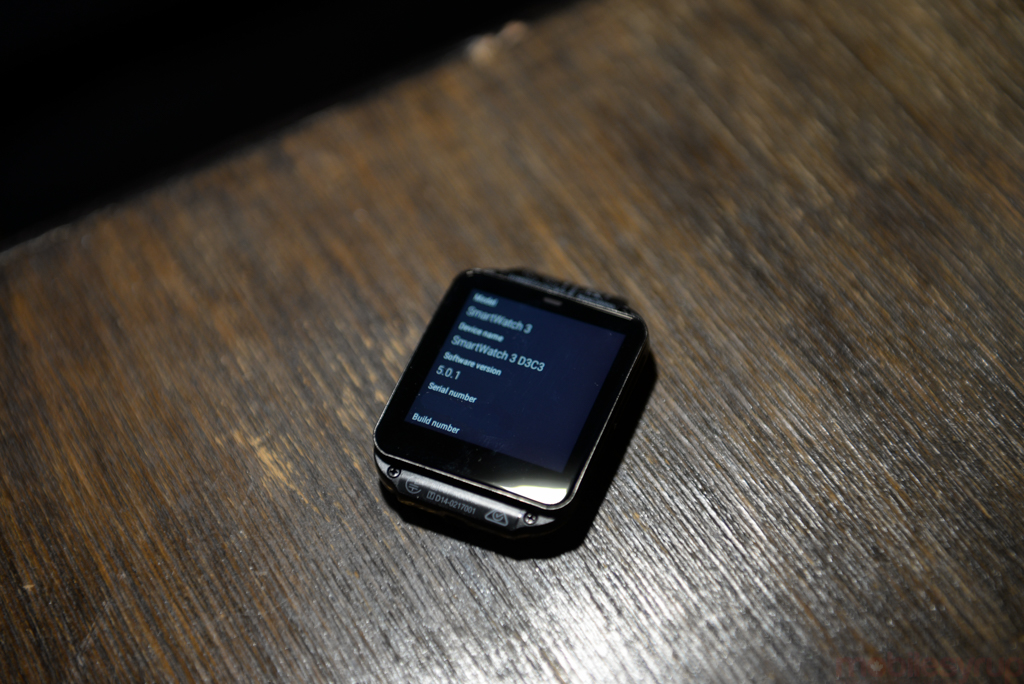 Certainly not the best Android Wear smartwatch on the market, the SmartWatch 3 is Sony’s best chance at sticking it out in an increasingly high-margin and high-stakes ecosystem. That the SmartWatch 3 can be used with any Android 4.3+ smartphone makes it less about staying within the Sony ecosystem as about pairing it with the right device — The Xperia Z3 and Z3 Compact are waterproof, too — the SmartWatch 3, at $280 CAD, is not as enticing as the Moto 360 despite the addition of a GPS. 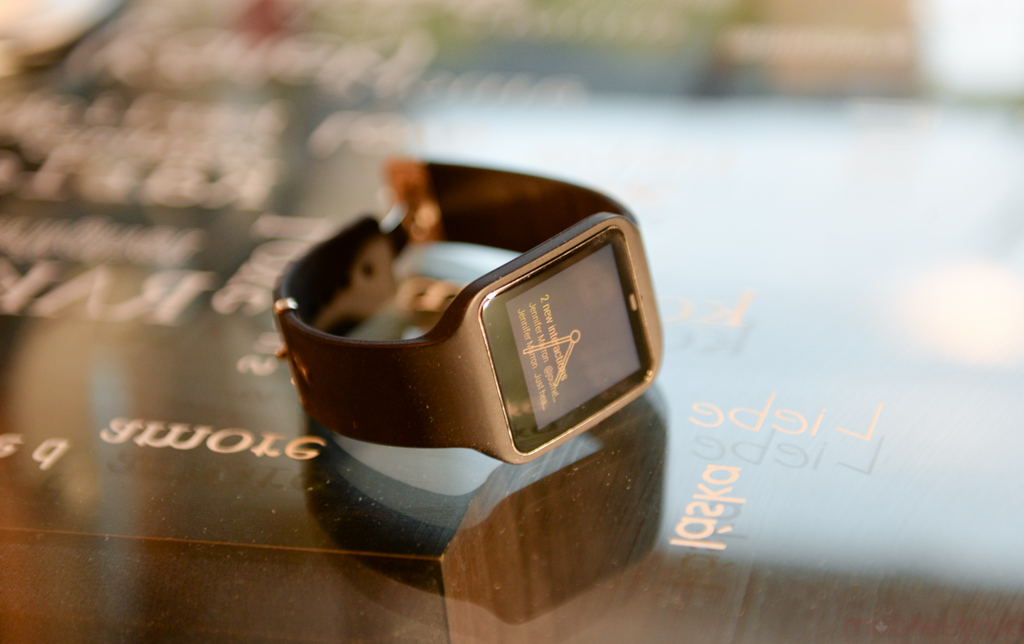 Despite excellent ergonomics, the LCD panel is too washed out to encroach on the Moto 360’s excellent, if lower-density, LCD display, and the LG G Watch, despite its age, still emerges victorious in the IPS department. The overall Android Wear screen winner, the LG G Watch R, is not available in Canada, but its absence doesn’t do anything to make Sony’s poor panel look better.

At $280, the SmartWatch 3 is too expensive to be considered essential, and with only a couple of standout features it comes down to whether your priority is having standalone GPS or a nice screen. Until 2015, it’s not going to be possible to have both.