Hands-on with shomi, the future of video-on-demand in Canada (video) 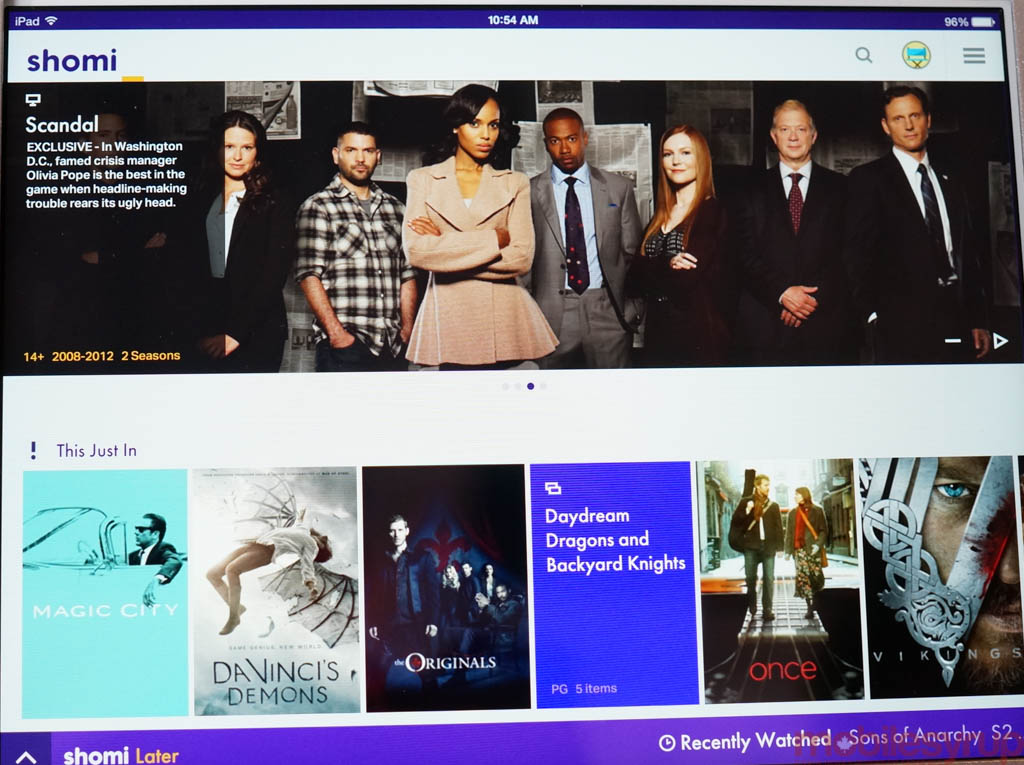 This morning, we went hands-on with shomi, the new video-on-demand service from Rogers and Shaw.

The service, which will be available in beta this November, will compete with Netflix in many regards, accessible on Android and iOS phones and tablets, set-top boxes and Xbox 360. (Rogers and Bell has not detailed on which STBs shomi will exist, aside from its own cable boxes, but we’d venture that it is working with Apple and Roku, among others.)

We won’t get too far into the content availability at this point, since the library we saw, which included a wide swath of new and classic movies and television shows, will expand before launch. 20th Century Fox, ABC and Universal Pictures are among the content owners whose back catalogues will grace shomi’s screen, and Keith Pelley, president of Rogers Media, promised an ongoing addition of quality content before and after launch. 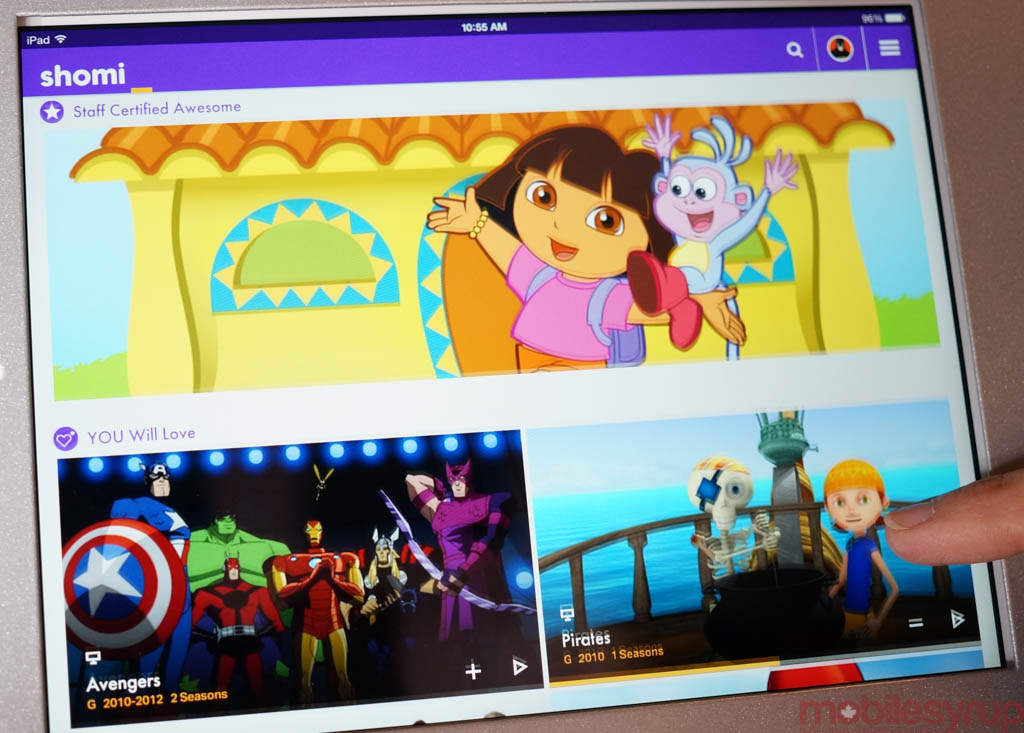 Indeed, the Shaw-Rogers collaboration, which will be operated as a separate entity, is all about “quality, not quantity,” according to Barbara Williams, senior vice president of Shaw Media. As Netflix divides content into categories, shomi will do the same, but there’s an element of curation that is missing from the American company’s algorithm-focused approach. Collections will be a set of movies or television shows from prominent Canadians and respected critics. 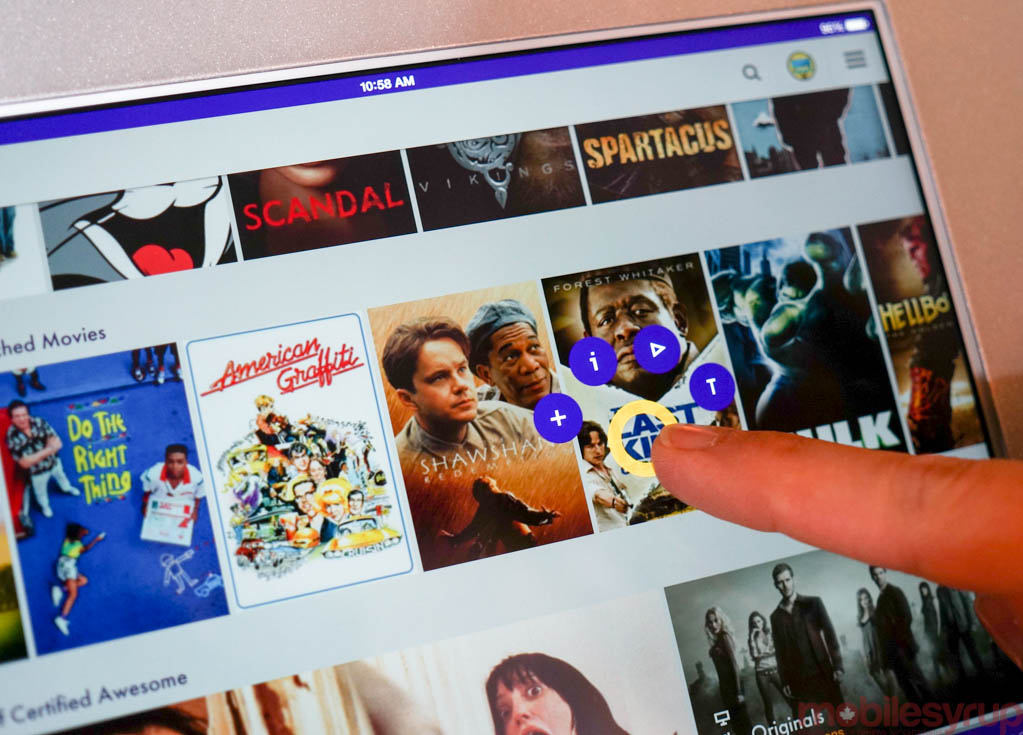 The app, which ran smoothly and animated beautifully on the iPad demo we saw, supports up to six profiles, each with separate video quality settings: Good, Better, and Best. We don’t know how much data per hour each setting will use at this point, but it will be similar, we’re told, to existing streaming services from Rogers and Shaw. 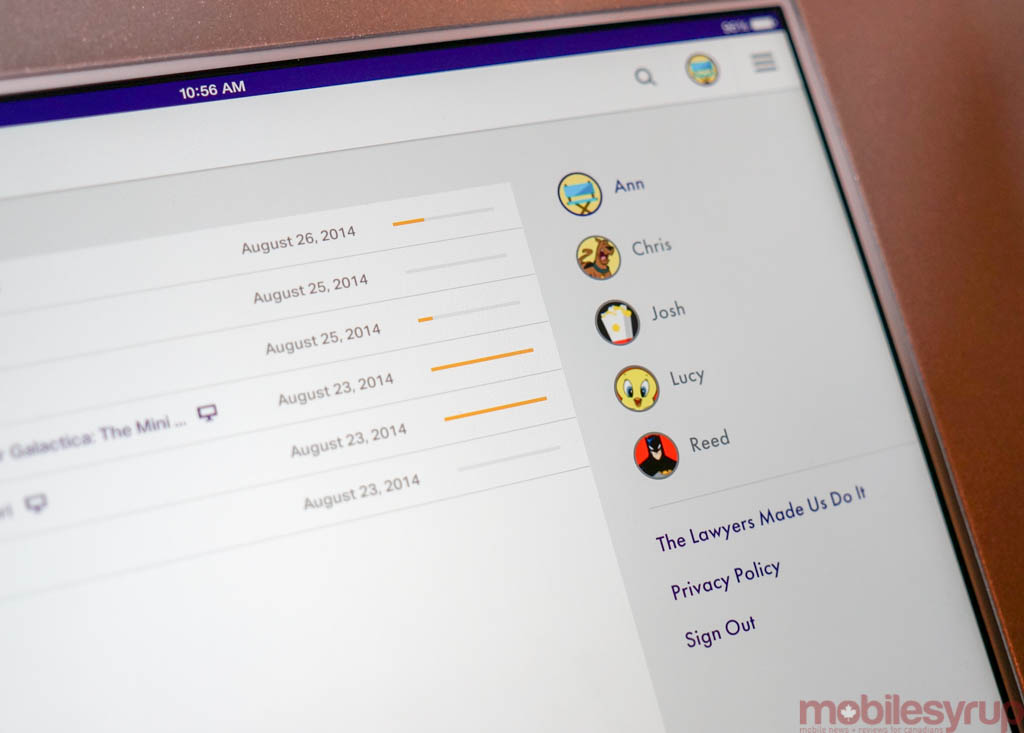 Parents will be able to limit children to just kids’ content, and they can set a default profile when the app opens to ensure young ones aren’t perusing titles they shouldn’t be.

In terms of content, we’re looking at past seasons of shows licensed by Shaw or Rogers, which between them own Global and City respectively, along with many specialty channels like FX Canada, HGTV, Showcase and A&E Canada. Cable subscribers will have an opportunity to watch in-season content first, either on-demand or through the respective Anyplace TV or Global TV apps, with full seasons filtering to shomi once the new one begins. Execs at shomi call this “complementary” to the two companies’ respective cable offerings. 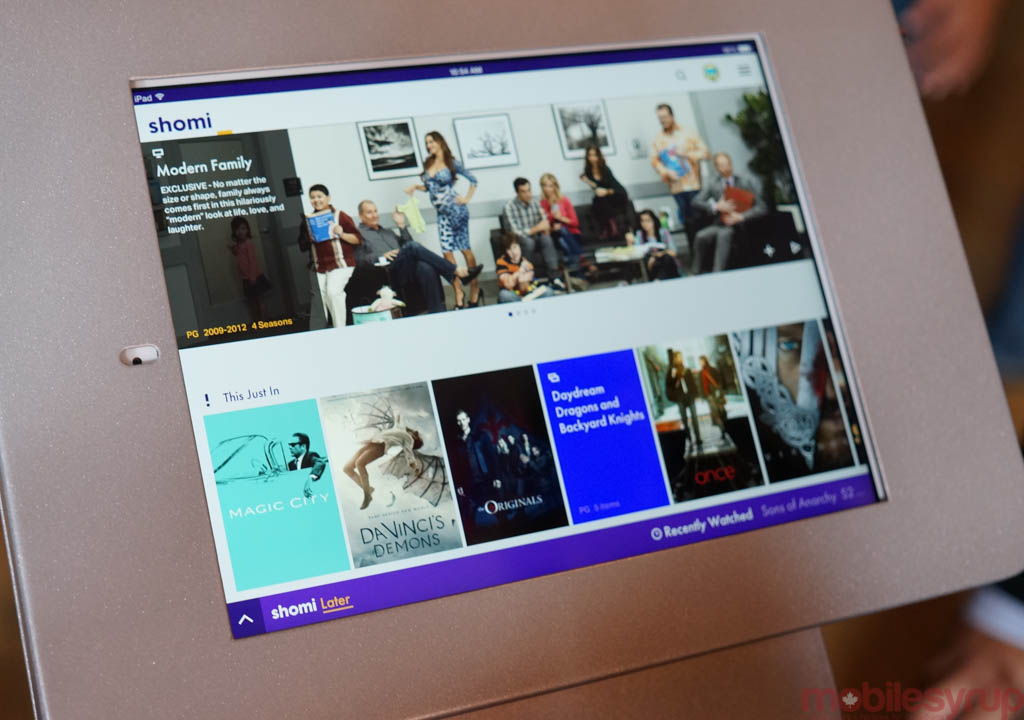 Initially offering the service to Rogers and Shaw cable and internet subscribers is not about limiting the scope of shomi, according to Pelley, but about letting the service scale in the right way. He noted that the team is in talks with other providers around Canada, and is confident that access will be granted to subscribers of other cable and internet companies in the coming months.

Unfortunately, Rogers Wireless subscribers without an equivalent cable or internet package won’t have access to shomi at launch, but Shaw notes that its cable and internet customers will be able to use its expanding WiFi network.

The beta is set to last six to 12 months, at which time shomi will either open up to customers on other networks, or to the wider Canadian population without restriction. Only then will it truly be a Netflix competitor. 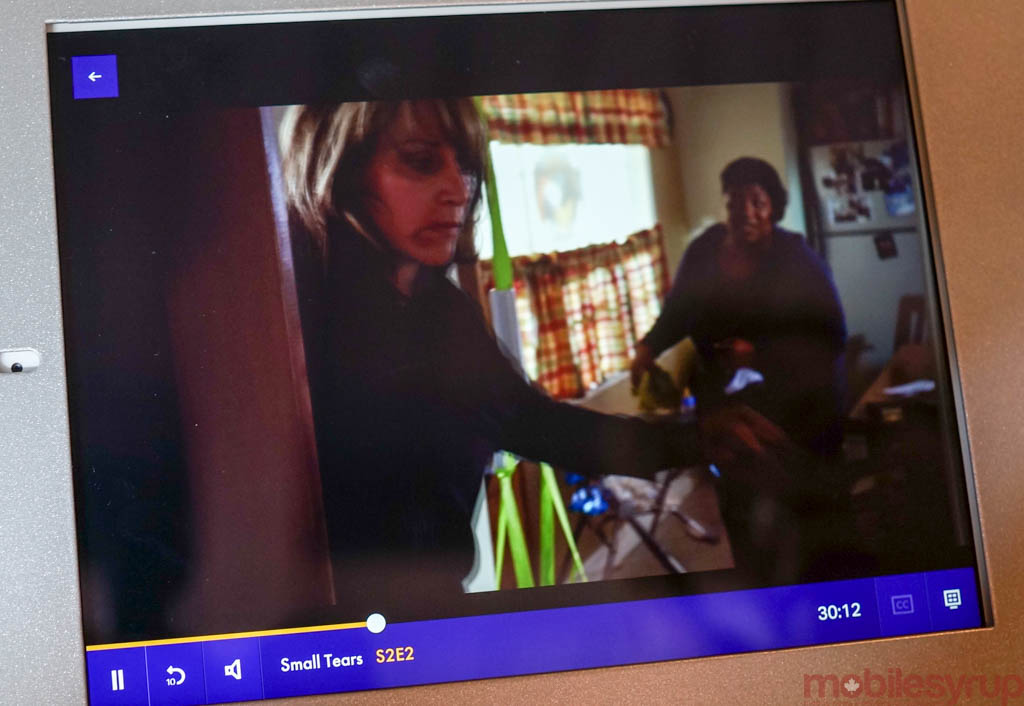 Launching at $8.99 is also a cause for concern, for despite shomi executives’ confidence that consumers are comfortable with “service stacking,” existing Netflix subscribers may balk at having to pay the same amount for a more-limited service. On the other hand, most Netflix subscribers already have home internet accounts, and shomi’s launch audience is 4.5 million between the two companies. 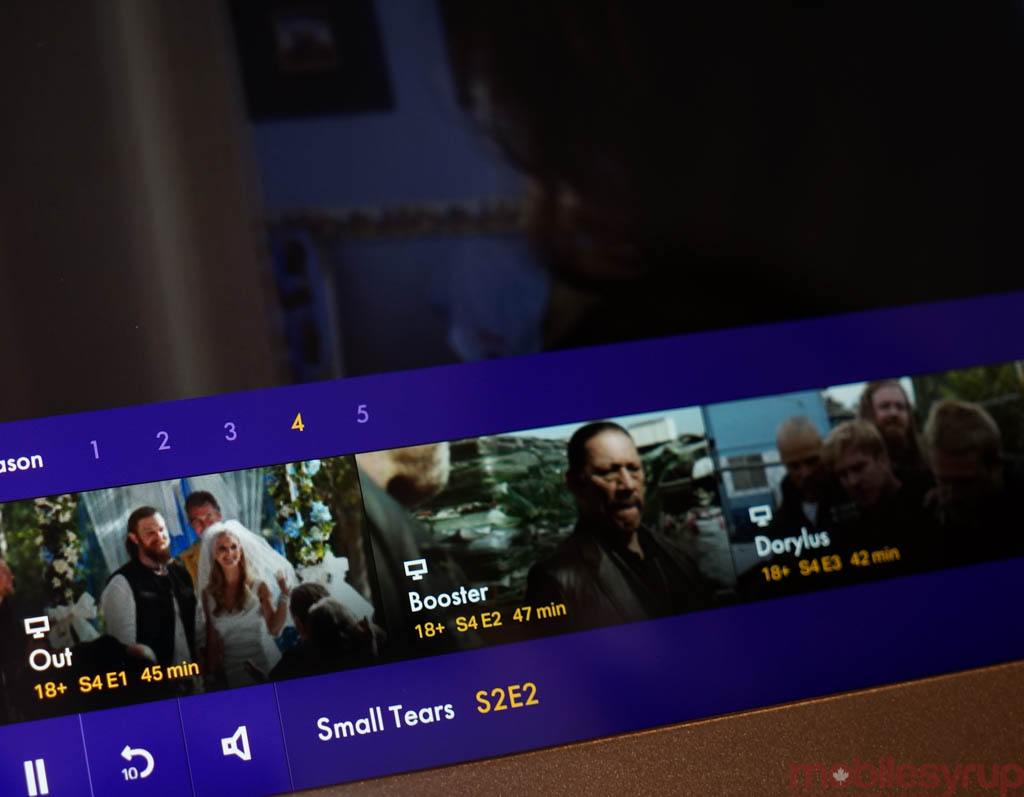 Shomi’s main advantage of Netflix is availability of quality selection: Rogers and Shaw already have exclusive licensing deals with the world’s largest content owners, so adding an additional over-the-top license was a logical next step in the process. While Netflix may have better selection in the US, many Canadians are not comfortable messing with VPNs and equivalent workarounds to access that expansive library. As a result, shomi may be a better version of Canadian Netflix, with an interface that most will be immediately comfortable with.

We’ll know more when shomi launches in November. At the same time, Bell is expected to launch its own Netflix competitor in Q1 2015, which will fragment the market somewhat.