Spotify is set to launch in Canada, and soon.

The company has launched a sign-up page where users can submit an email address in exchange for the prospect of receiving an invitation to use the service. It’s unclear when the company plans to open the proverbial floodgates, but this is the best indication we’ve seen yet that Spotify is serious about expanding north of the border. 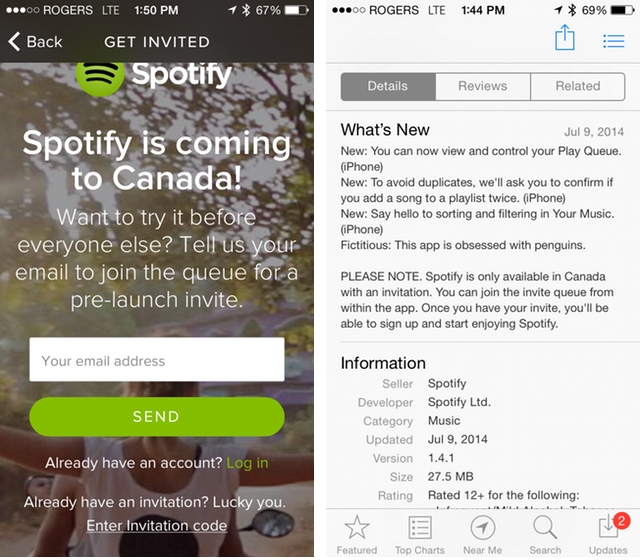 Spotify initially signalled its intent to launch in Canada as early as August 2012, but sat silently as competing services like Rdio, Deezer and Google Play Music have arrived in its stead. The piecemeal rollout is meant to create a service distinct to Canadian listening audiences. In a statement to iMore, the company said:

“We know there is a lot of excitement and demand for Spotify in Canada and we want to reward those fans who have patiently waited for the launch, so we will begin sending out invitations to users who have signed up on the online waiting list shortly. Over the coming months we will be gradually inviting users on to the service in an attempt to systematically scale Spotify in the most manageable way possible.

When Spotify launches in a specific country we always make sure that the experience is curated for local tastes and culture. That means great local content and local curation of the music discovery experience. Spotify in Canada needs to be much more than just the Canadian version of Spotify in the US. That is why we are taking our time to make sure that the service we launch in Canada is the best possible experience for music fans from B.C. to Nunavut to Newfoundland.

Current Canada-based Spotify users will have to sign up for a new account, at least at this point, to be placed on the waiting list, as the service hasn’t recognized Canada as an official region just yet.

In the meantime, you can download the Spotify app from the Canadian App Store and wait your turn.