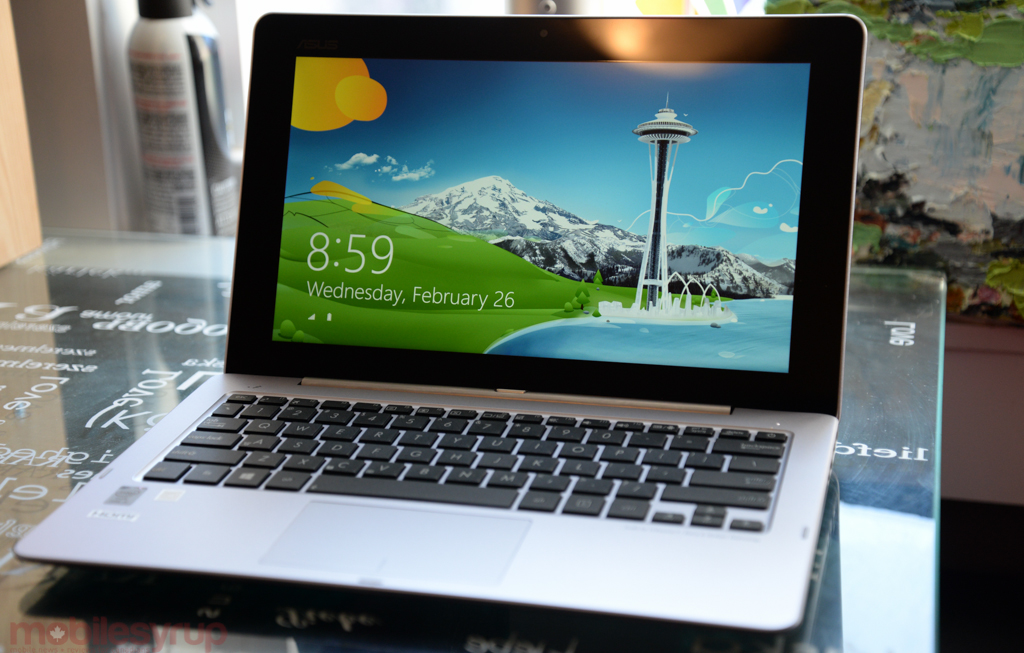 In the computing word, the term “hybrid” is often synonymous with “compromise” or “expense”. In the case of the Asus Transformer Book Trio, neither applies: it is a fully-capable computer with separate hardware for both an Android tablet and a Windows laptop/desktop. At $949, it’s also fairly inexpensive for the hardware you get.

While the device doesn’t fit into MobileSyrup’s usual purview, it was so interesting, we had to find a way to look at it — and we’re glad we did!

The “tablet” portion is what passes for a typical Android tablet these days: a 1.6Ghz dual-core Atom SoC from the Bay Trail family, 2GB of DDR2 RAM, 16GB of internal storage, a 5MP rear camera, Android 4.2 Jelly Bean and a 19Whr battery. 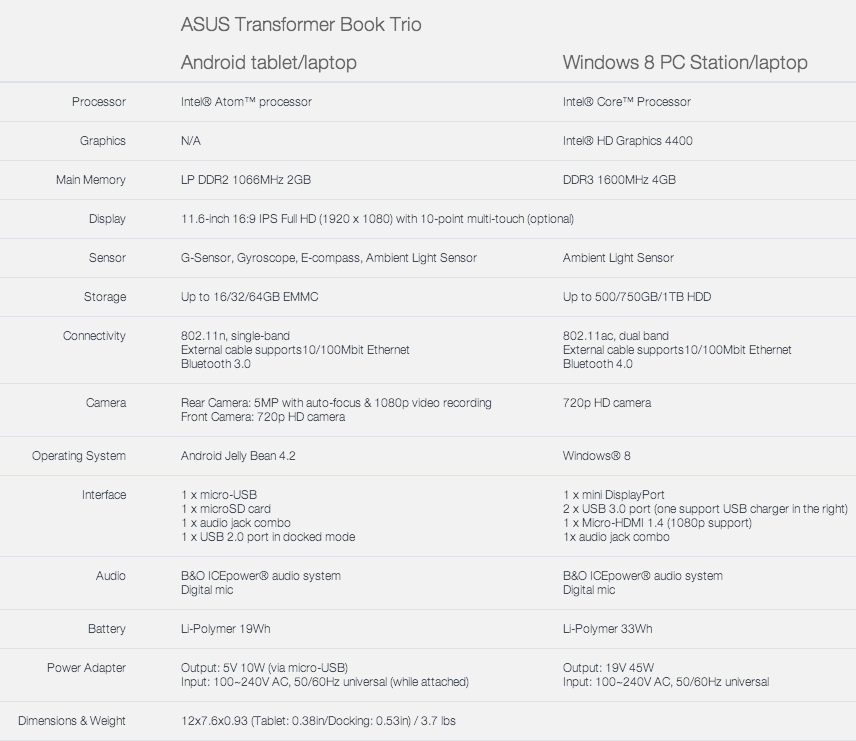 The devices share a single 11.6-inch 1920×1200 pixel IPS display, which actually houses the Android hardware within. This means the Windows portion won’t function unless the screen is docked, or an external display is connected via the mini DisplayPort.

The Android portion, on the other hand, can take advantage of the included keyboard dock (and its extra battery) for typing, but works independently. 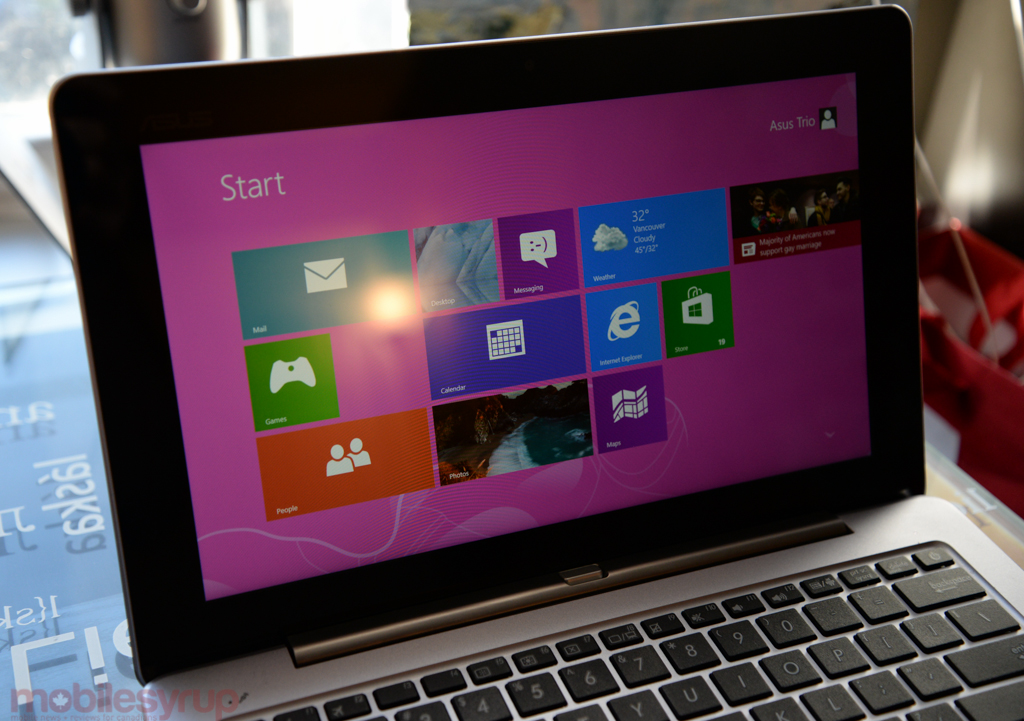 The whole thing screams “too much of a good thing,” but in reality they cohere quite well. There is a single button on the keyboard to switch between Android and Windows mode, and the transition is almost instantaneous, owed to the fact that the former is not emulated, but run natively on separate hardware.

When in Android mode and docked, for example, the PC hardware hibernates so as to use as little battery as possible. 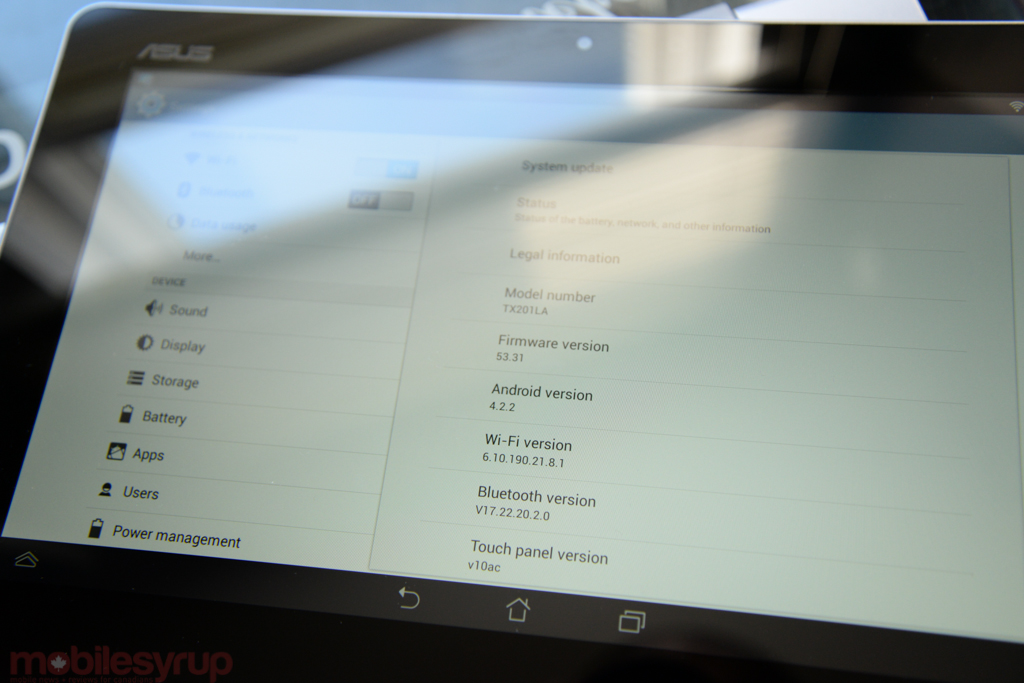 I used the Android tablet, undocked, far more than Windows laptop, docked, but both presented themselves extremely well. This is in large part due to the excellent 11.6-inch display, which sports fantastic viewing angles, excellent brightness, and little to no backlight bleeding.

Indeed, this is one of Asus’ best screens to date, and its 10-point multitouch was fast and responsive. 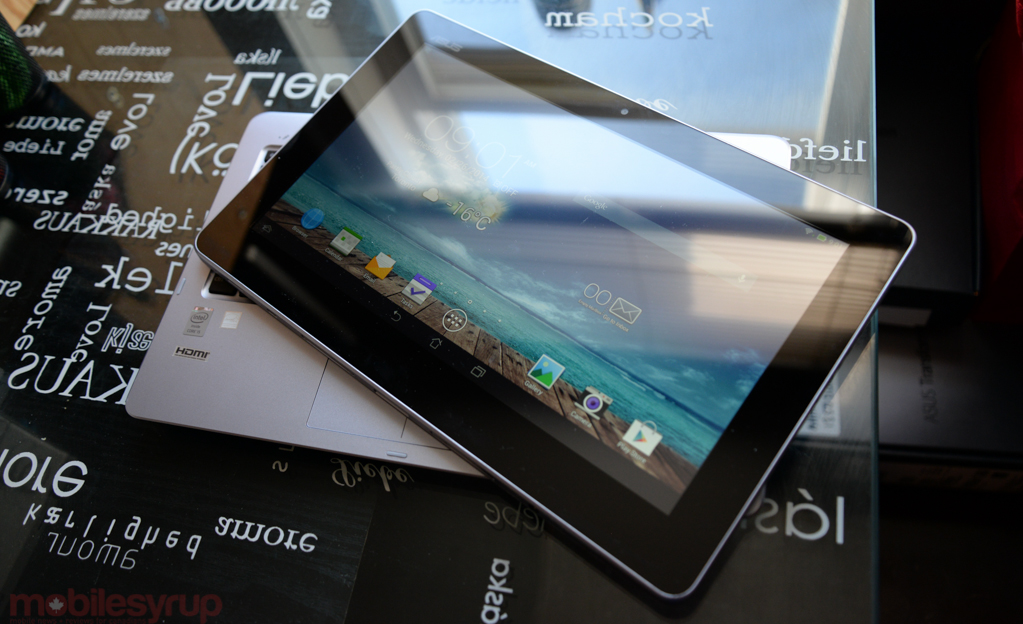 The main issue with the Trio is that it will likely never be bought as an Android tablet alone: at 11.6-inches it is far too big, and at $949 it is far too expensive.

Docked together, the Trio is a hefty 3.7lbs; on its own, the tablet is under half that amount, but still awkward due to the large screen size. The average customer is going to see the Android tablet as a bonus addition, not a requirement. So it would stand that the Trio has to be a consummate Windows laptop — and for the most part it is. 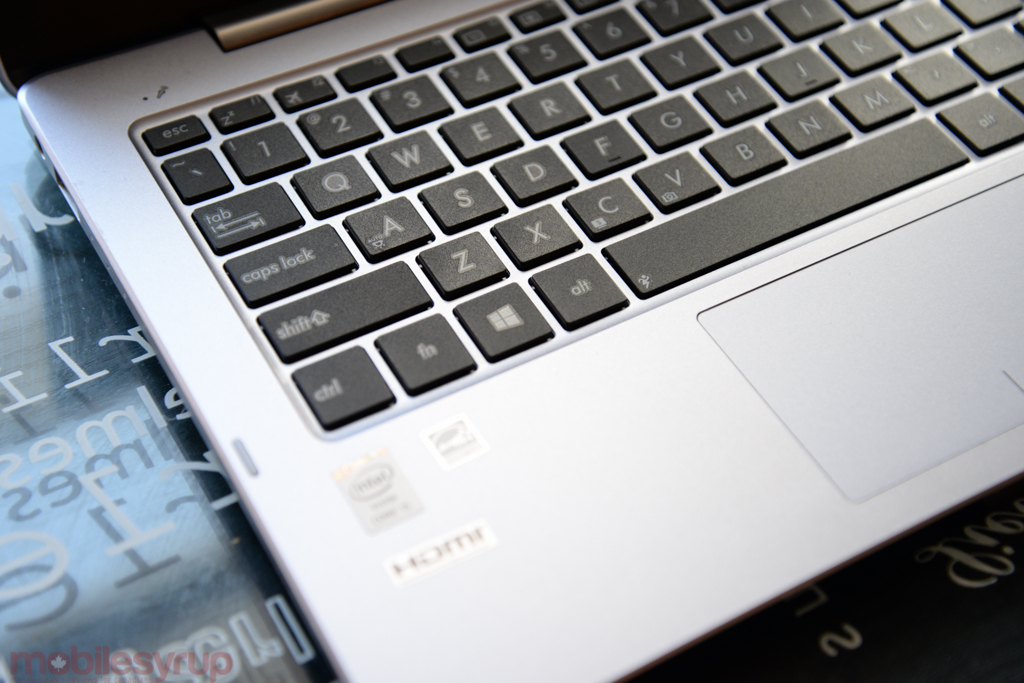 The keyboard is shallow and relatively quiet, but lacks the high-quality feel of a Lenovo or Apple laptop; the trackpad is good for a Windows PC — responsive and accurate — but, again, lacks the versatility of a MacBook Air. 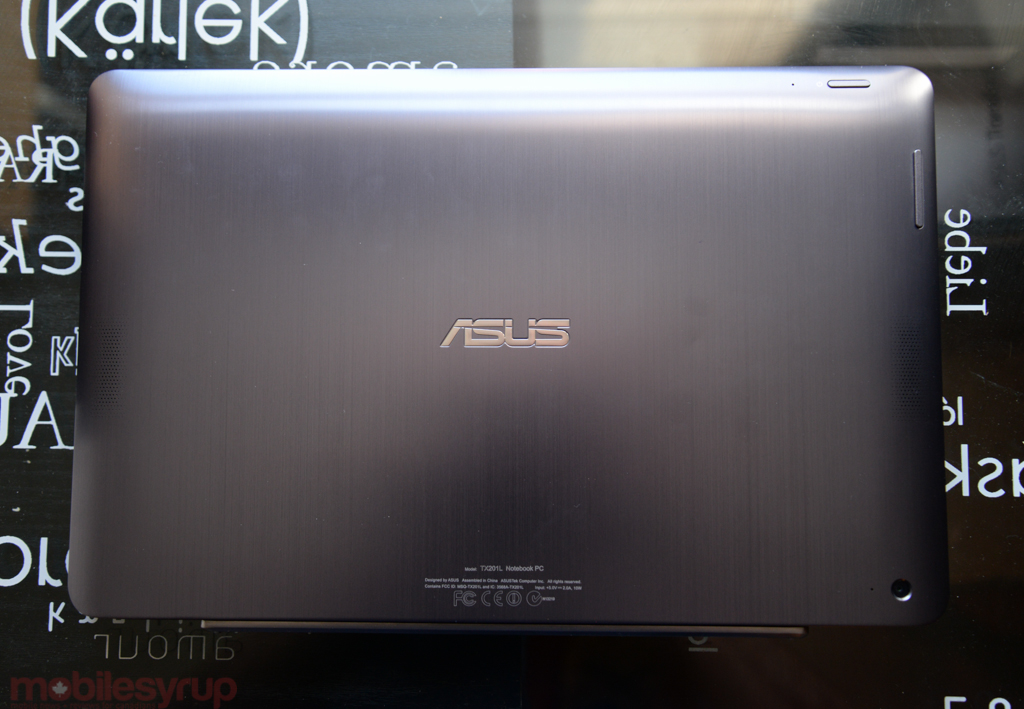 Finally, the hinge that positions the screen when the tablet portion is docked is the Trio’s biggest weakness; it is both heavy and immobile, and easily sways when knocked even slightly. 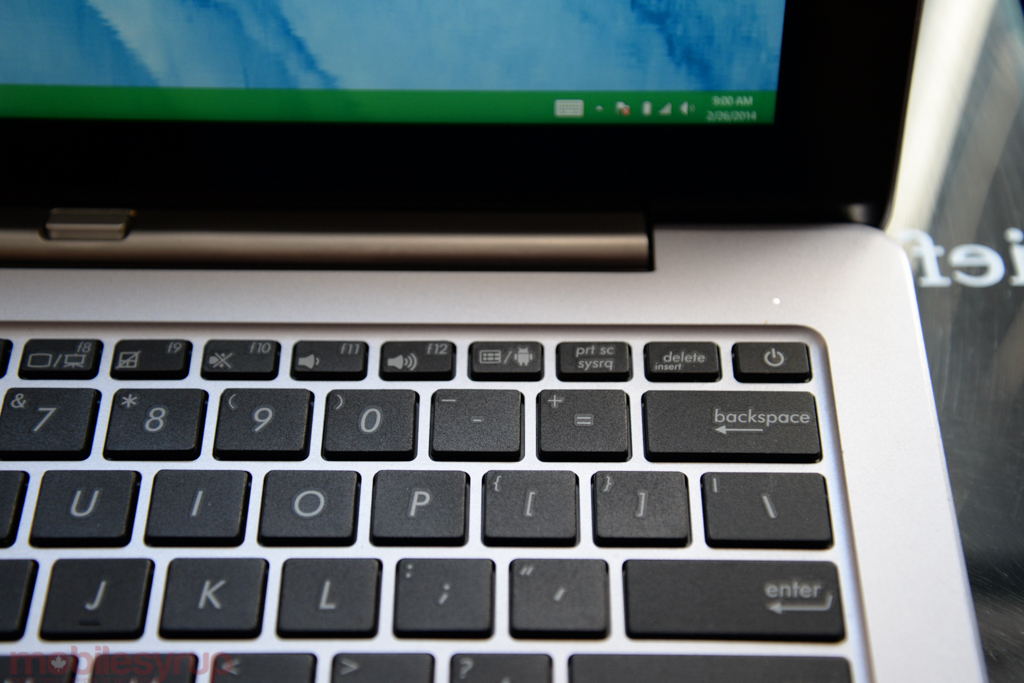 The Asus Transformer Book Trio includes Android as more than an afterthought, but it is certainly not the main attraction here. Rather, it’s a value-add in a market where Android is increasingly commoditized, and presented with a bevy of choices that ultimately leaves them longing for another platform. The Trio certainly fills the Windows Store app gap by giving one-touch access to the Google Play Store, and a great way to type/game/interact with them.

It’s not going to appeal to everyone, but it’s a great choice for someone who doesn’t want to carry two specialized devices.