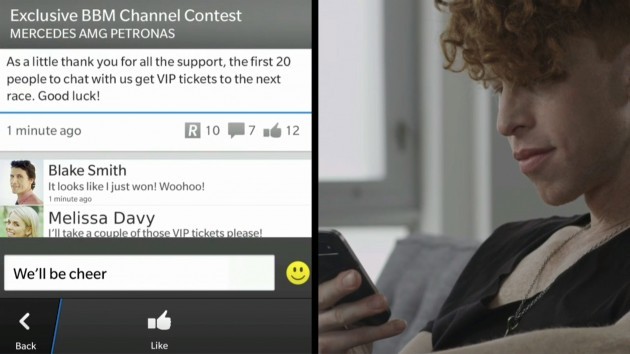 Update: BlackBerry has just posted a message on their company blog that “BBM Channels for BlackBerry 10 and BlackBerry OS devices has officially launched!” The company says that BBM Channels will be coming to BBM for iPhone and Android in the coming months and users on those platforms “can still get started on the website if you have a confirmed BlackBerry ID email address!” – more here at BlackBerry

After months of beta testing, BlackBerry is finally taking the beta tag away from Channels, its broadcast-slash-forum-slash-engagement feature aimed at businesses, brands and, of course, celebrities. Within the BBM universe, Channels exists as a way for individuals to follow and engage with companies and products in a safe, forum-like community, and for those companies to track the myriad data points and metrics to use in their own analytics.

While the launch is currently limited to BB10 and legacy BlackBerry devices, the Waterloo-based company says that this is just the beginning for Channels, and promises to roll the feature out to Android and iOS users in the coming months. And though there is no monetization strategy yet, BlackBerry is looking to aggressively sell BBM Channels to brands and companies, and may eventually charge for premium features or sponsored content; they are already charging companies to use a version of the desktop-based Channels manager, and many are already on board, from Coca-Cola to UPS.

Less corporate, and perhaps more along the lines of how most people will use BBM Channels, is the potential for education-based broadcasts and discussion. Picture a university study group or tutorial using it, where the professor posts an assignment and students discuss it among themselves, in-line within the feed, or privately in a separate BBM chat. Channel owners can set public “discussion” or chat times, where participants can publicly ask questions — kind of like office hours at a university.

Though this is just the beginning, BBM Channels does seem to have a lot of potential. It will definitely be interesting to see how BlackBerry works it into their Android and iOS apps, especially as user traction continues to rise.