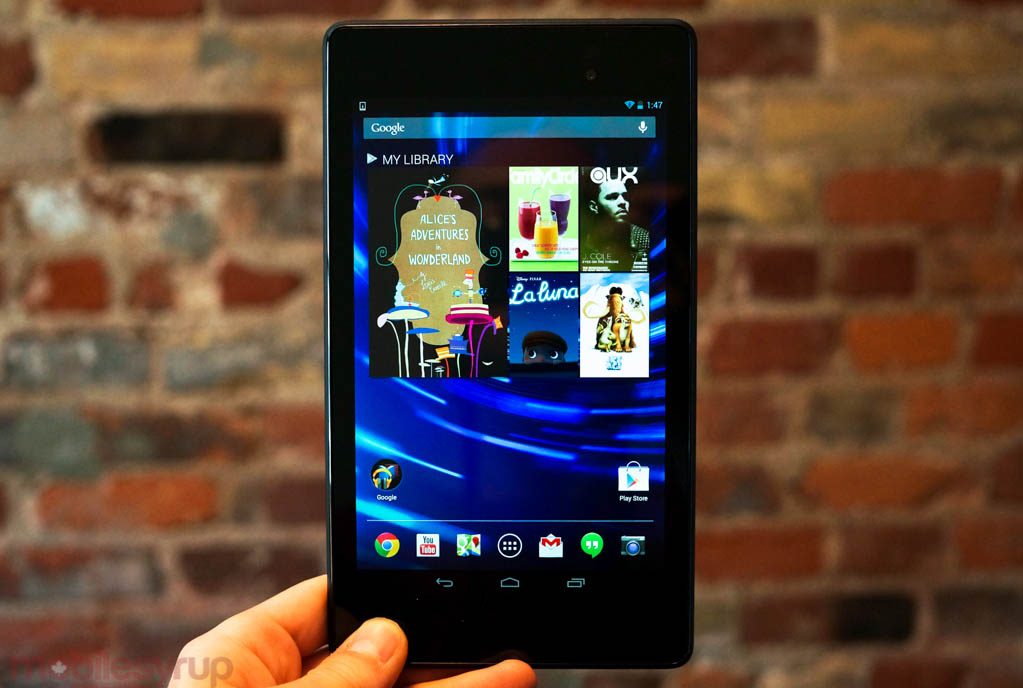 Whereas most movie sequels are met with dread as the release approaches, the second iteration of a piece of tech is usually more warmly received.

Apple has made a cottage industry of annually revisiting hardware with improved specs and more advanced features, and Google’s Nexus program, which the company subsidizes for users to more readily connect with its growing content ecosystem, has taken a similar route.

The 2013 version of the Nexus 7 is better in every way from its predecessor, and but for a marginally higher price, should be considered before any other Android-based tablet this year.

With an entry price of $229, the new Nexus 7 is well worth your time. But why is it such a good buy? Let’s break it down. 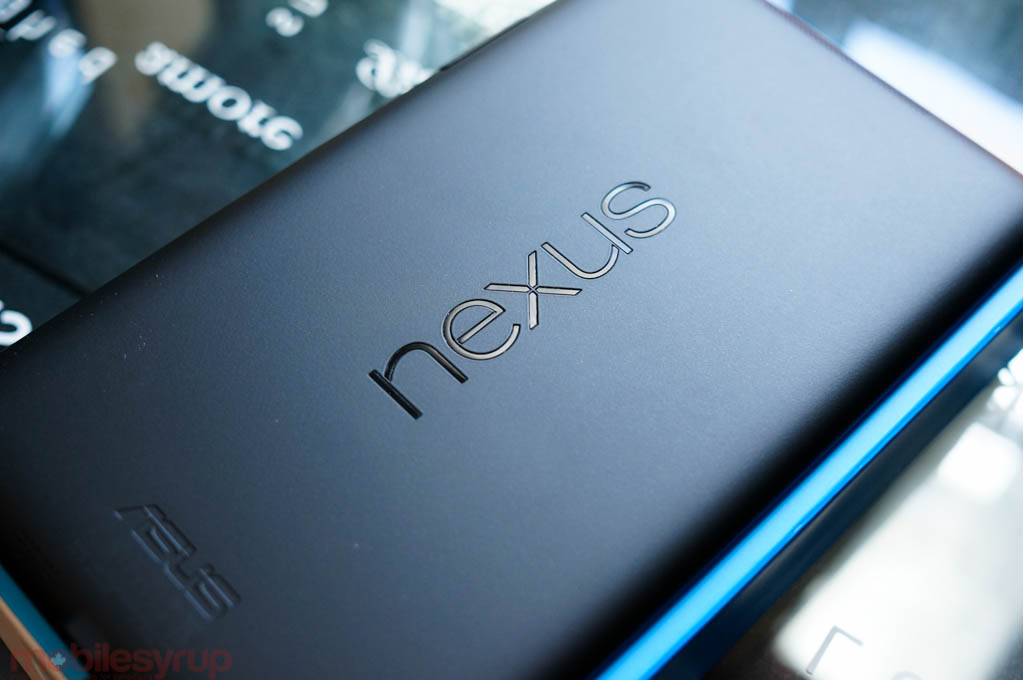 This section is going to be significantly longer than the next, likely because Asus and Google got so much right this time around. Whereas the original Nexus 7 was squat and a practically rectangular 16:10, the long-and-thin model from this year does away with side bezels almost entirely. It’s much easier to wrap around a palm as a result, though it occasionally gives the impression of being too tall.

This is necessary because it’s more difficult to hold on the side now, and you’ll want to get used to gripping it between forefinger and thumb on the bottom right or left; I found this to be the most comfortable position. Sceptics may continue to espouse the virtues of 4:3 as a tablet’s prudent compromise, but I tend to use slates for consumption more than contribution, and the 7-inch Nexus 7 is comfortable to use in both portrait and landscape. Indeed, reading a book on the high-resolution screen — this display is something else — is a gift.

Now, Apple may still be the king of the ecosystem, but Google has done a great deal to improve an Android user’s lot in life in this regard, too. Sure, Canadians can’t pay for music or TV shows, but the selection of apps, games, books, movies and magazines is beginning to show signs of maturity. Whereas last summer, with the original Nexus 7, I could barely find a decent movie to watch or game to play, I can now read the New Yorker, watch Oblivion, devour Harry Potter, play Dots, and use Flipboard (and Vine, and Instagram, and…).

But I’m getting ahead of myself. In last year’s model you could see the cracks in the paint, so to speak. The backing wore; the buttons creaked; the screen bled. That’s all gone this time around, and you feel like you’re holding a tablet worth far more than its meagre price. 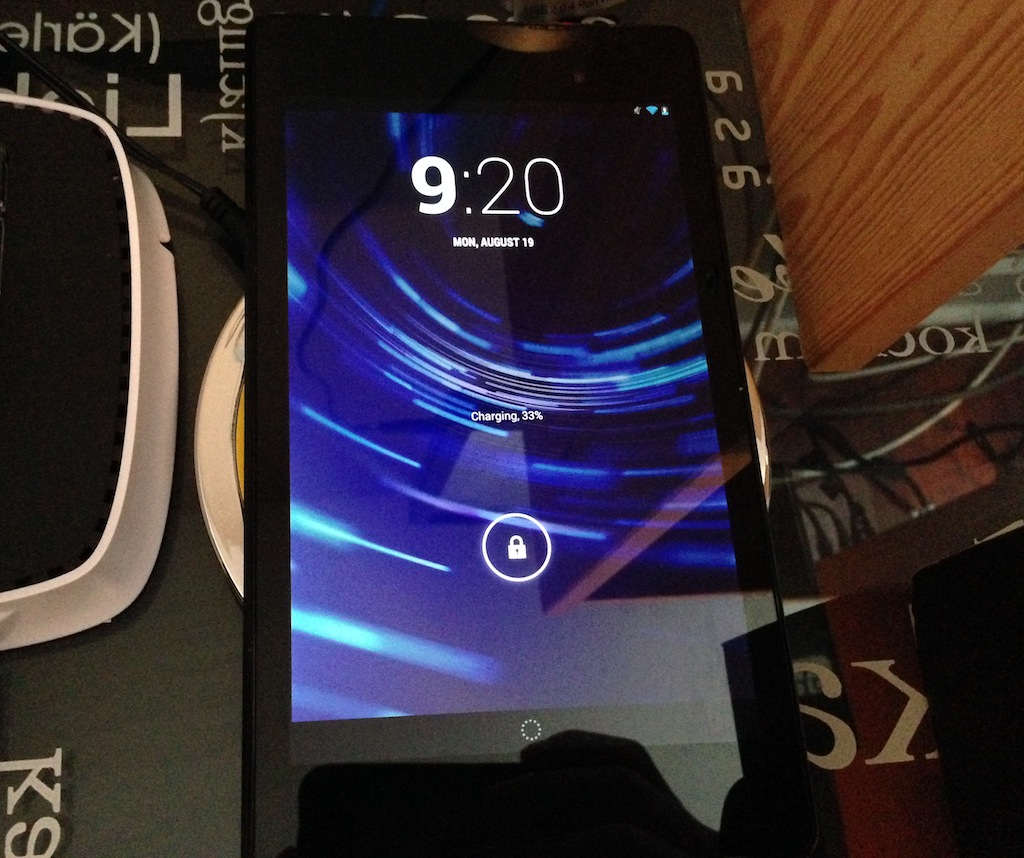 That it comes with a rear camera and wireless charging are cherries on top of a cake you’ve already eaten more than you should. The 1080p screen (actually, it’s 1200p, but who’s counting?) is technically the highest-density tablet on the market, and though it doesn’t quite match the Retina iPad for viewing angles and colour reproduction (it’s blacks are slightly too grey) it is a dream to consume media on this thing.

Wireless charging is another one of those understated perks, something I take for granted whenever I use my Nexus 4 (and miss whenever I don’t). Tablets take up a lot more space, and I usually vertically prop up my slates when charging them with wires, but I suspect the ease at which I can come home, take the Nexus out of its bag and recharge it 5 or 10% before heading out again will eventually win out over space considerations.

Also a joy are the rear speakers through which you can discern actual channel separation. This sounds like a minor victory and an insignificant spec, but it’s worth mentioning how few tablets produce something close to decent sound. This one does, and it makes watching movies, or even just listening to a music video, so much better.

The tablet is also fast. Let’s put aside the reality that the Nexus 7 runs an older-than-brand-new piece of silicon under the hood, and reflect on how it actually performs. Compared to a device like the Samsung Galaxy Tab 3 8.0, or even the faster Note 8.0, the Nexus 7 feels demonstrably faster. No, I won’t benchmark the thing; it’s a waste of time. 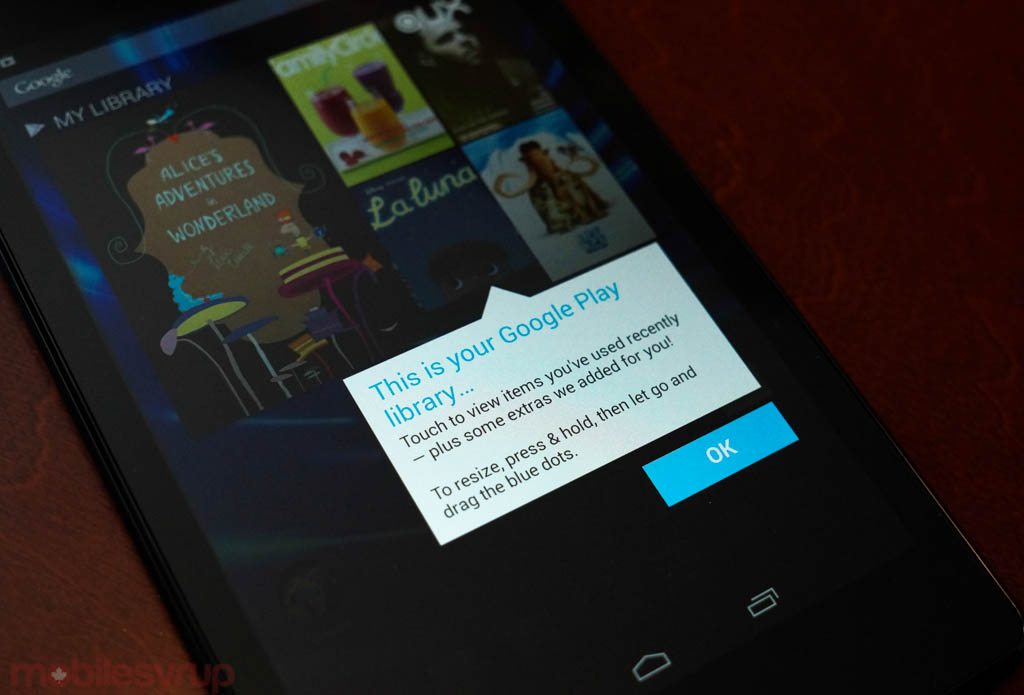 Google has taken its core Android experience and paired it with a more-than-capable combination of internal hardware capable of performing practically everything the OS has to throw at it. Unlike some early adopters, I noticed no performance glitches, touch response issues or anything out of the ordinary. That I mostly did what tablet users tend to — read in Play Books, browse in Chrome, listen in Rdio, stream in YouTube, watch in Play Movies, type a few notes in Evernote or Keep — did not convince me that tablet needs moar powar!!, but rather that the spec game is a battle that, in the end, consumers will lose.

Asustek’s revamped hardware also speaks to the quickly-falling cost of components, as it was apparent many of last year’s shortcuts, both in hardware and software, were a result of thin margins. While margins in this year’s model are still likely small, the overall feel of the tablet, from the rubbery backing to the improved keys to the excellent speakers and display, puts it in a completely different category. The 2013 Nexus 7 may not scream iPad, but it no longer screams Walmart throwaway, either.

Android 4.3 is also a different sort of beast than the first iteration of Jelly Bean was in June, 2012. While the operating system looks largely the same, the number of nips, tucks and tweaks to the core framework, from a consistent 60fps framerate throughout to the inclusion of user profiles, lockscreen widgets and a far improved Bluetooth stack, speaks to Google’s newfound aesthetic restraint — they found something that works! — and desire to deliver a better Android to mainstream consumers.

Google Now is also a big part of the operating system, pushing truly useful content to the logged-in user. And, as already stated, the Play Store has been fleshed out, and Google’s new first-party apps, from Maps to Google+ to YouTube, have improved immensely in 12 months.

In spite of the new Nexus’ lack of Tegra hardware — this year’s version is built on Qualcomm, not Nvidia, silicon — I found games far more enjoyable, and stable, to play. As we’ll get to in the next section, there is still a great deal of iOS-only content that won’t ever likely grace Android, but the 7-inch display scales phone apps, especially in portrait mode, far better than a 10-inch slate, and most of the time I treated the tablet (in a good way) like a really big phone.

Sure, Twitter, Yelp and a million other apps aren’t optimized for Android tablets, but developers are increasingly taking notice of the OS’ flexibility and incorporating some tablet-only features. Even the apps that aren’t meant to be used on a screen this size look better because Android apps in general look better than a year ago. There are some ghastly exceptions, but the list of crappy Android apps is diminishing.

That we can say the same about Android hardware is a good thing, too. 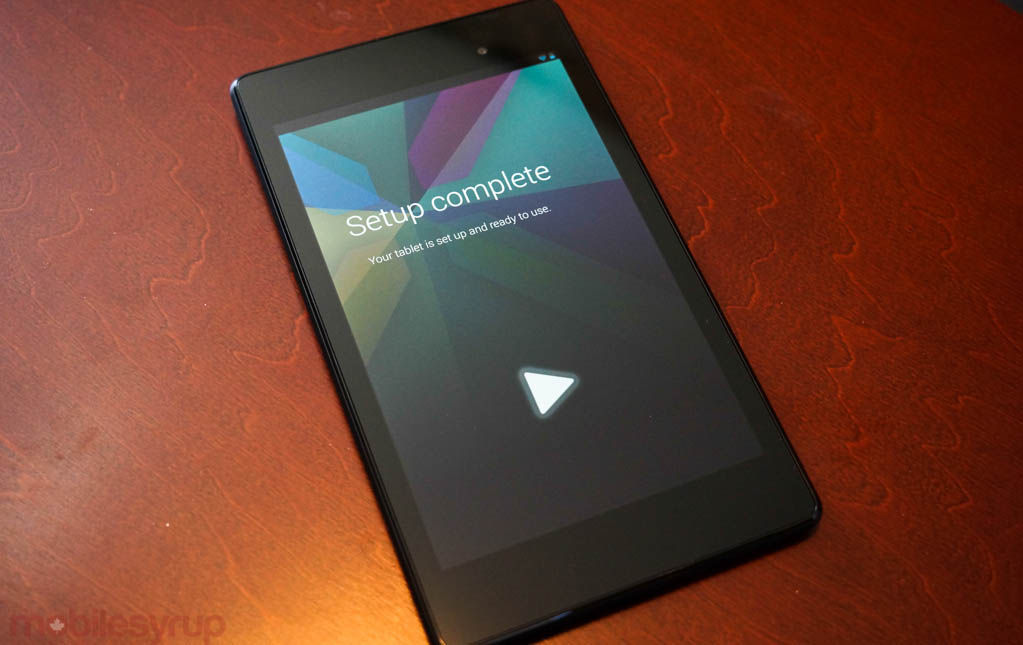 Every photo taken with the Nexus 7 appears to have a fine layer of desert dust over the lens, but it’s just a terrible camera. I’m the guy who shakes his head at those using an iPad to film a wedding, and though the Nexus is closer in size to a giant phone than a tablet, it’s unlikely to be the only camera on his or her person. They say that the best camera is the one you have on you, but in this case I’m not so sure.

The front-facing camera is slightly improved over last year, and allows for some excellent Google Hangout or Skype video chats.

More frustrating, at least for Canadians, about the new Nexus 7 is its still-meagre tablet ecosystem compared to Apple’s iPad. Yes, I said that it’s good, far better than it was a year ago, but it’s still not great.

Canadians can’t buy music, nor can they activate the digital version of a print magazine subscription like they can in the US. The Nexus 7 has fewer books, movies and magazines than iTunes, and the tablet app availability is still embarrassing. No, this isn’t contradicting what I said in the previous section; yes, most phone apps work great on the Nexus 7; and yes, some developers are taking notice. But there are 375,000 iPad apps, and many of them are desktop quality. For many users, this is reason enough to spend the extra $100 on an iPad mini.

The iPad isn’t necessarily a better tablet, but it certainly engenders a more comprehensive tablet experience. Much of this has more to do with Apple’s more established presence as a content portal than Google, but it’s hard for Canadians all the same.

There’s also the question of quality control: my Nexus 7, which I purchased from Best Buy, had a piece of glass missing from the left side of the screen. I didn’t drop it, nor could I find it in the box (which rules out the idea that it was dropped en route to the shelf), it just wasn’t there. I’ve heard similar stories about backlight bleeding, creaking buttons and poorly-affixed rear covers. These appear to be the exception to a vastly-improved manufacturing line over last year, but it’s still difficult to forgive.

Battery life was another pain point, as I found myself achieving slightly under the advertised nine hours of uptime. Both the iPad mini and the Galaxy Tab 3 8.0 performed much better in this regard, and I wonder if, in trying to keep the tablet lighter and thinner than last year, it was wise to shave off 500mAh of battery in the process. The 3950mAh cell is comparatively tiny compared to the tablet’s aforementioned competitors, and with Android’s tenacious desire to update everything in the background, the extra juice could have gone a long way. 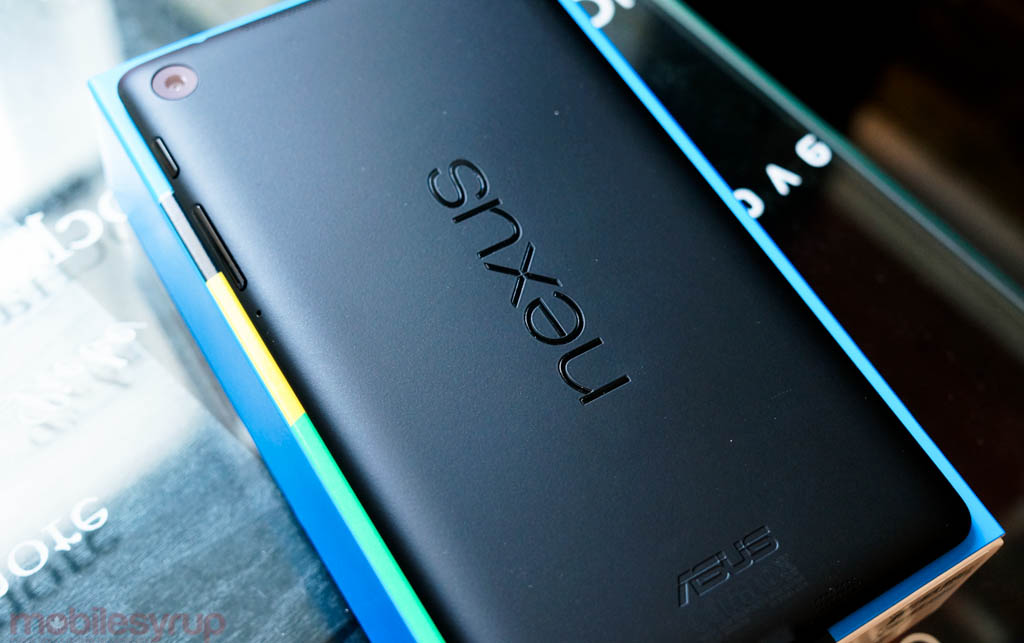 There is no doubt that, at $229, the 2013 Nexus 7 is the best value for money in the Android tablet market, and likely in the entire tablet market. Unless Apple surprises in October with a Retina iPad mini (and signs are pointing to a likelihood), the Nexus 7 will still be the pixel density king. (On a side note, a 7.9-inch Retina iPad mini would have an almost-identical 324ppi pixel density to the Nexus.)

At $100 cheaper than the cheapest iPad, and $70 less than the equivalent Galaxy Tab, it’s easy to forgive the Nexus’ flaws, and most users will certainly overlook a few shortcuts here and there. Google is clearly subsidizing the tablet to get it, and its growing content ecosystem, into the hands of as many people as possible. The Nexus product line continues to be a gateway to the real drug: the Play Store.

With OEMs like Samsung and Sony differentiating on features, both hardware and software (S Pen, waterproofing, IR blasters), Google is taking the simple route and releasing an honest-to-goodness quality product for not a lot of money.