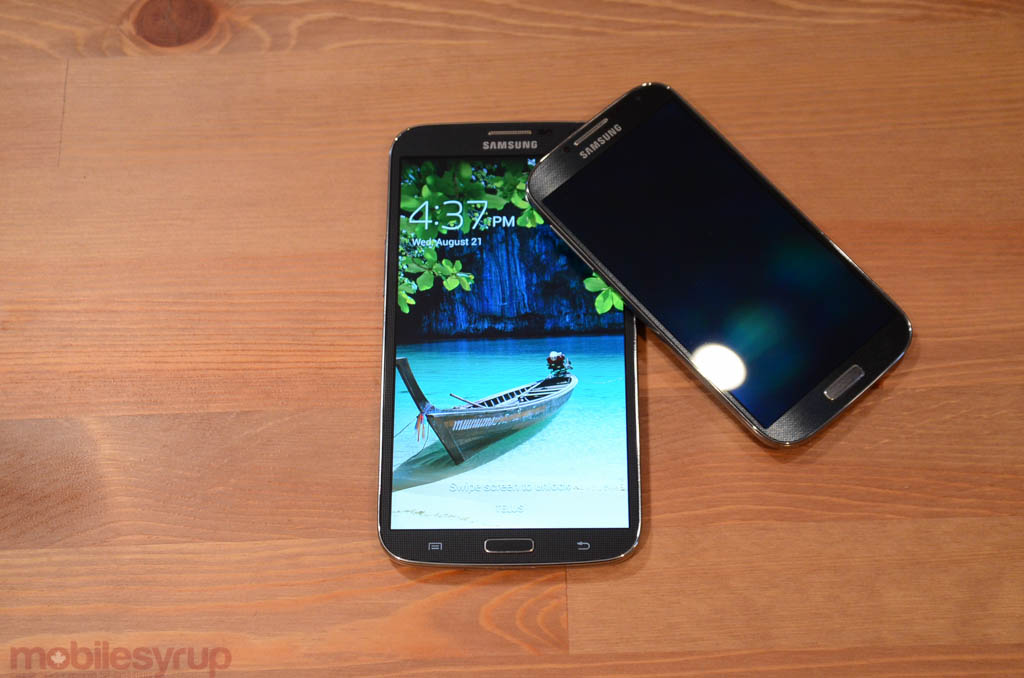 The Galaxy Mega is coming to Canada shortly, and Samsung had us over to their place for a croissant and a walkthrough.

What amounts to a mashup of the Galaxy S3 (internal) and the Galaxy S4 (external) is more than the sum of its enormous parts, but it’s worth exploring exactly whom the device is for.

Unlike the Galaxy Note series, Mega is aimed at the mid-range — Samsung actually launched two models, 5.8″ and 6.3″, but we’re only getting the latter — and should cost around $100 on a 2-year contract when it goes on sale later this month. It lacks the Full HD screen of the Galaxy S4 and the S Pen of the Galaxy Note, but uses the same glossy materials. In other words, if you love the feel of the GS4, this just has more to love.

Let’s break down the specs. The 6.3-inch display is a TFT LCD, so no Super AMOLED here. It’s bright and colourful, but lacks the deep blacks and over-saturated hues of the smaller devices (if you can call the Galaxy S4 small). Viewing angles are good, and max brightness is actually higher than the Galaxy Note II.

The dual-core Snapdragon 400 processor provides two Krait 300 cores at 1.7Ghz, and an Adreno 305 GPU clocked at 400Mhz. In other words, it’s much faster than the GS3 and considerably slower than the GS4. But pushing fewer than half the pixels of Samsung’s 5-inch flagship means that despite the larger screen, the GPU has to work less hard to render what’s there. So while some users may bemoan the Mega’s lack of high-end specs, it doesn’t negatively affect real world usage.

There’s LTE connectivity, both on AWS and 2600Mhz bands — it will have one SKU and be compatible with all three carriers, including Rogers’ LTE Max frequency — as well as Bluetooth 4.0, WiFi, WiFi Direct, NFC and an MHL port. 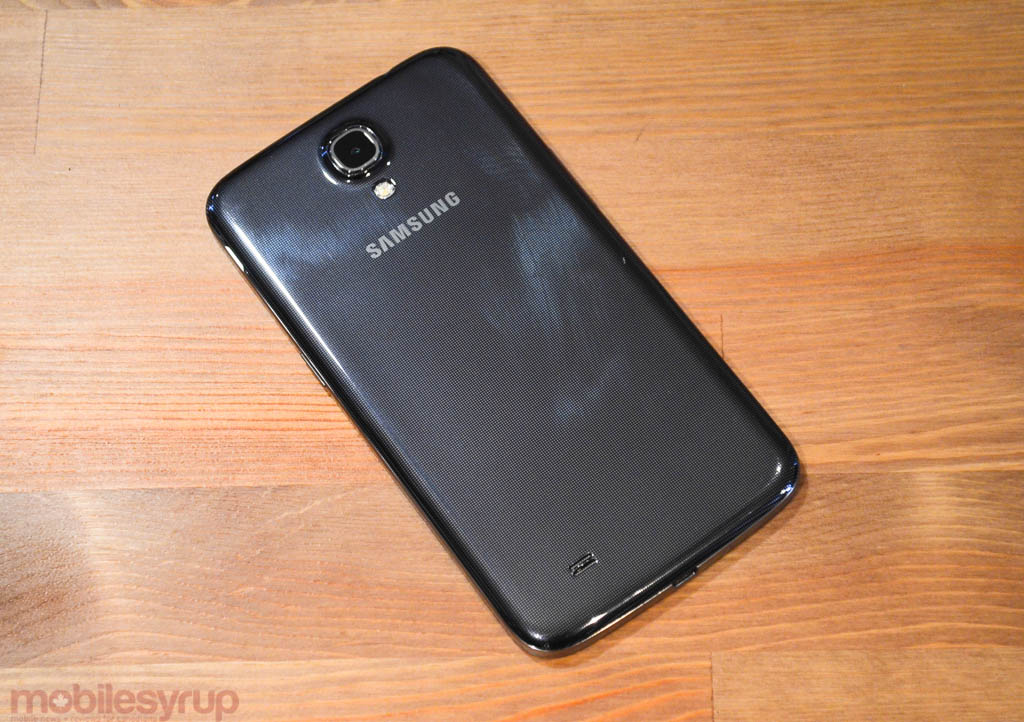 There’s 1.5GB of RAM inside, along with 16GB of internal storage, which can be readily expanded by 64GB with a microSD slot. The usable space out of the box is around 10GB, which is higher than what’s available on the GS4, but still a disappointing number when you consider the limitations of certain apps being stored externally.

The 8MP camera, Samsung told me, is nearly identical to the one on the Galaxy S3, so we expect photos to be clear and detailed, with minor issues in low light. We fondly recall the GS3’s excellent camera experience, but this time we have the same UI to what’s available on the GS4. This is because the software on the Galaxy Mega is virtually identical, barring a few omissions based on different hardware, to the Galaxy S4. 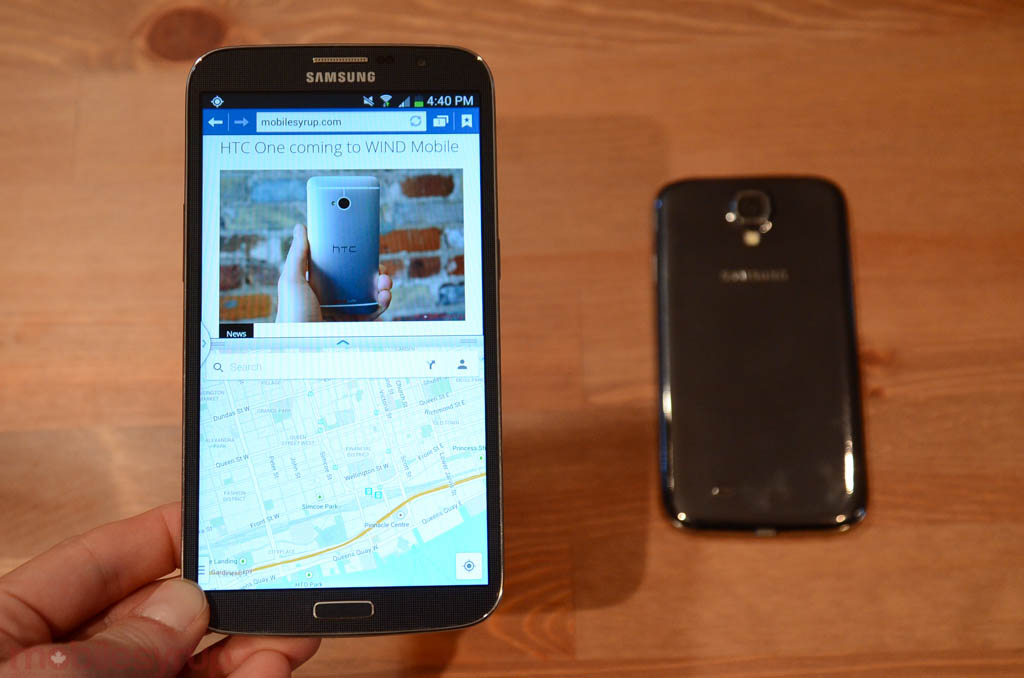 Running Android 4.2.2 with TouchWIZ, the Galaxy Mega’s software does differ slightly from the GS4 — it lacks the barometer and thermometer, so S Health is not as complete — but will be familiar to anyone who’s used a Samsung device in the last year or so.

Features like Air View, Multi Window, Smart Stay and Gestures are all present, and they appear to work quite well on the massive 6.3-inch screen. Samsung Apps, Samsung Hub, Trip Advisor: Samsung Edition, WatchON (IR blaster), Flipboard and other apps are pre-installed, but the device does not seem as bogged down as the GS4 did at launch. 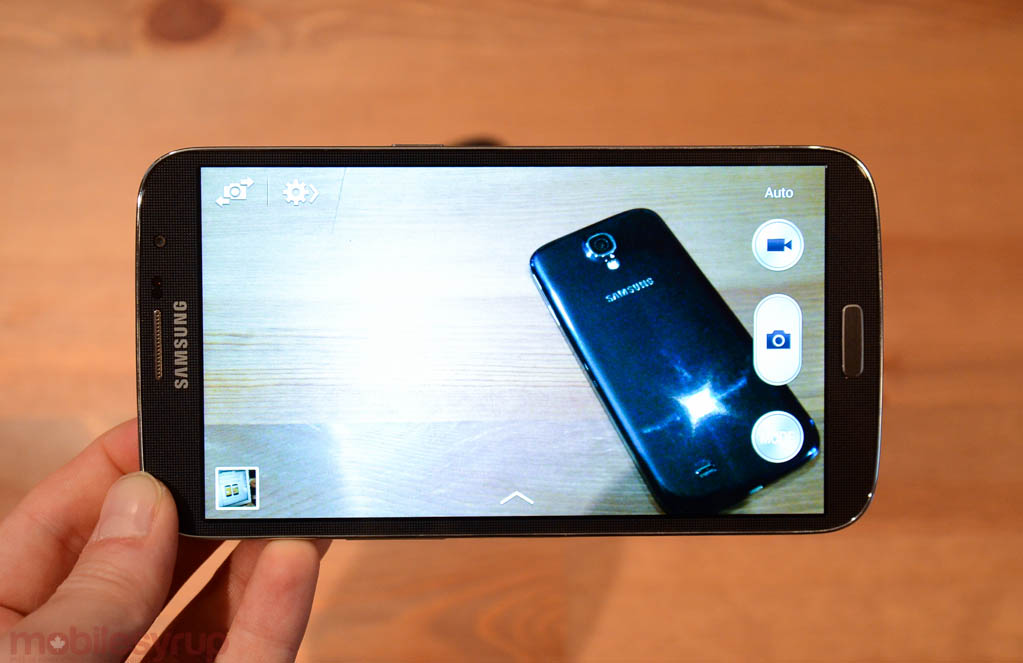 While the software experience is largely unchanged from the S4, it’s the oversized hardware that will get many talking. Samsung is aiming the device at a cross section of the population considering both a phone and tablet; students are among the main demographics being targeted.

The device is truly massive, though not uncomfortably so. It rests safely in a jean pocket thanks to its relatively sparse 8mm girth, and though it stretches the hand somewhat to hold, it does not feel unnatural to do so. The main issue is with one-handed usage; it is practically impossible to use the Mega with a single paw. Though there are some considerations for one-handed usage — the dialler and calculator have been resized to be reachable when holding the device aloft — much of the UI is only accessible by holding the Mega in one hand and navigating with the other. 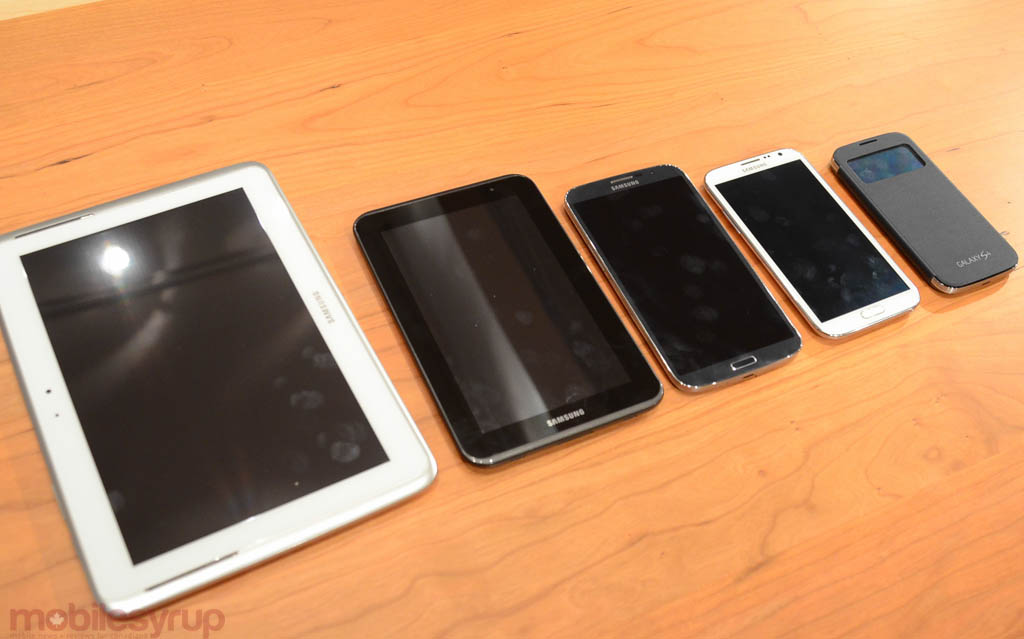 When sized up to the rest of Samsung’s growing line of phones and tablets, it’s easy to see this place the Mega closer to a 7-inch tablet than a 5-inch smartphone. The Galaxy S4, and even the Galaxy Note II, are dwarfed by the 6.3-inch behemoth, and though the screen bezel is minute, it’s the width that may turn some users away.

Depending on how the device is positioned, it may sell quite well, but it’s certainly not competing for the same eyeballs as the Galaxy Note, which skews more to business users, nor the Galaxy S4, which covets the power user. 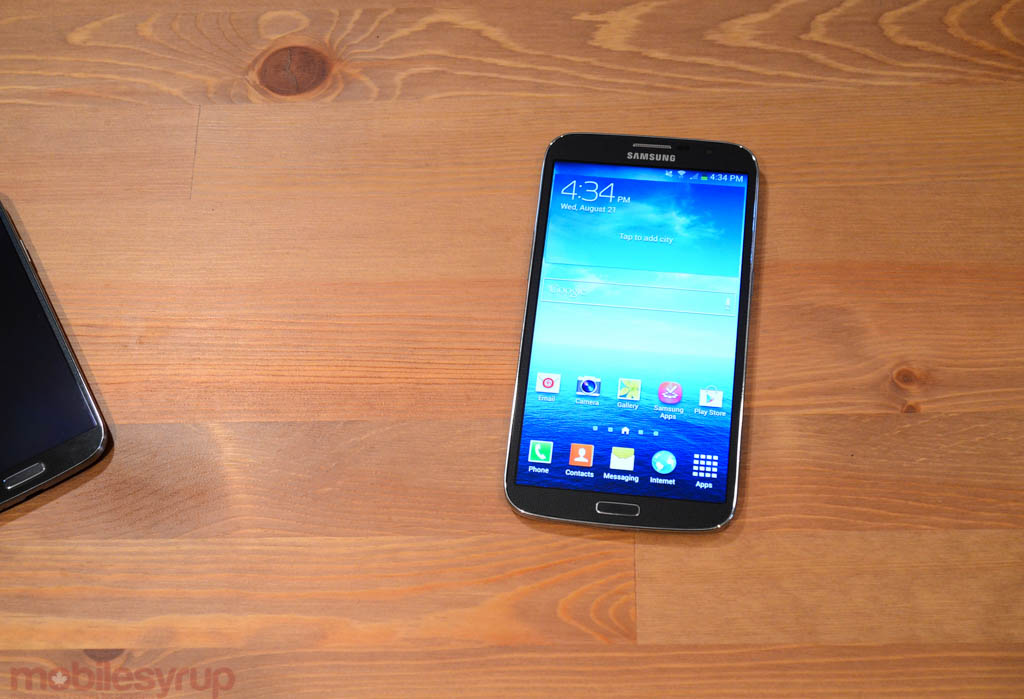 The size of the screen, coupled with the relatively low pixel density, makes it perfect for casual e-reading or web browsing, and Samsung says it may go after the seniors market following the back to school season.

I’m not quite sure where I stand, but I’m going to use the Mega as my primary device for a few days and report back. Just think: I may have to hold the thing to my head and make a phone call.