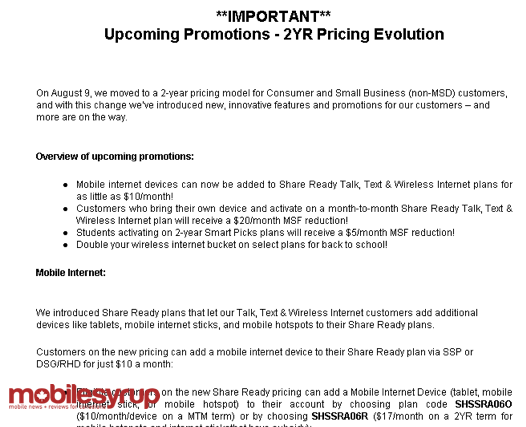 Tomorrow, Rogers will be making official its intention to match Bell and TELUS‘ $20 per month bring-your-own-device discount, as laid out in a note sent to employees.

Previously, most smartphone users who brought their own device on a month-to-month plan were entitled to a 10% fee reduction, which maxed out at around $14 per month if choosing the top 10GB data tier. Now, users who choose to bring an older or off-contract smartphone will be paying roughly $35 per month for unlimited voice and messaging, plus a tiered data bucket of between $30 for 1GB and $105 for 10GB.

It looks like the cheapest share plan going forward will be $65 for 1GB of data for customers who bring their own devices.

The discount is available to any individual or small business customer signing a month-to-month term on or after August 16th — according to the doc, the 10% “Handed Down Device Discount” will remain for Talk & Text, Smart Pick and legacy sharing plans signed before August 9th. It’s more than likely that those users who signed up on a 2-year term between August 9th and 16th will be eligible for the discount.

Rogers will also be providing a $5 per month discount to students on 2-year plans signed between August 16th and September 30th.

Lastly, the network provider is doubling the data for various price tiers, including the remaining individual (non-share) plans, now dubbed Smart Picks, and two of the lower-cost Share Ready plans.

This is good news for Rogers customers disappointed in the recent price increases associated with the adoption of 2-year contracts, and back to school season looks to be heating up quite quickly as a result.