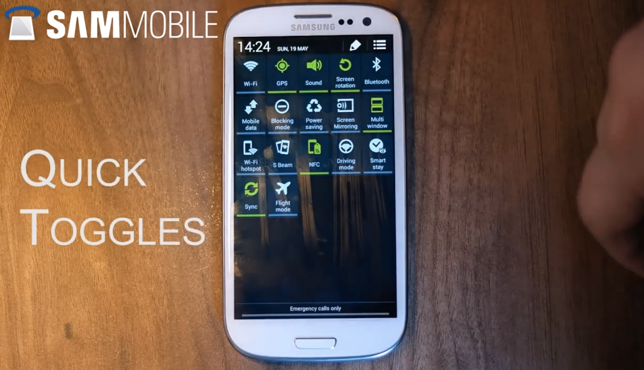 Samsung has all but finished the version of Android 4.2.2 destined for the Galaxy S3. SamMobile has exclusively released a version of the software for international models and they say the Korean company is on track to complete testing by the end of the month.

While the hardware for the international model is slightly different than the North American version — it runs a quad-core Exynos 4 processor while ours rocks a dual-core Snapdragon S4 chip — the feature sets should be identical when they’re released.

Unfortunately, the North American versions of Samsung’s products tend to receive updates later than the North American models, but this should change with newer devices as they commonly share a single Qualcomm-based architecture.

The full changelog is listed by SamMobile, too:

In other words, the update should look remarkably like the Galaxy S4 shipping software, though there may be some omissions that rely on hardware the S3 does not have. SamMobile also posits that we’ll likely see an updated camera interface before the update goes gold, but there will likely not be as many custom modes as the S4.

Samsung has been quite good about keeping its older phones fresh by drawing down features from their current flagship models. Many relevant features will eventually come to the Note 2 as well.

Watch for the Android 4.2.2 update to hit Galaxy S3 devices by the end of the summer.