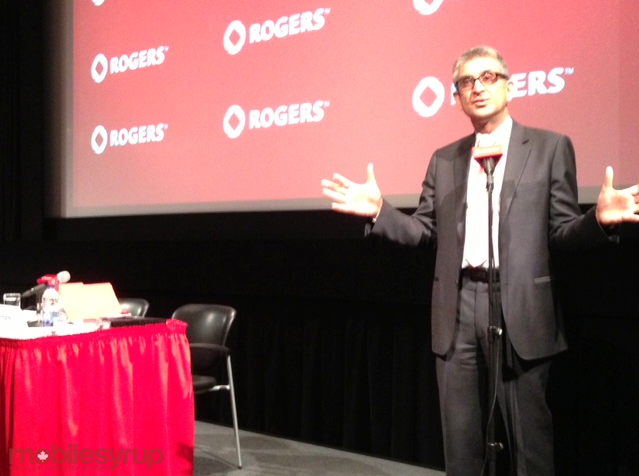 Earlier today I attended Rogers 2013 Annual General Meeting and Nadir Mohamed, President and CEO of Rogers, proudly communicated highlights from the past year – record revenues, market share, and subscriber numbers. It’s known that Mohamed will be retiring from Rogers effective January 2014, but that hasn’t stopped him from declaring Rogers intentions for the coming years.

From a wireless perspective – straight from his speech – Rogers will be looking to “improve their customer service to build loyalty, drive internet connectivity and content investments to grow the top line and deliver the fastest and most reliable Internet experience.” Smartphones, data, and content will be a huge play for Rogers. Yesterday it was reported that 71% of their postpaid subscriber base now has a smartphone, with an ARPU of $59.68. People are simply consuming more data on a daily basis – probably Gangnam Style or Gentleman on YouTube.

There was one interesting nugget on how Rogers will possibly differentiate themselves from the other carriers. Back in 2011 Rogers filed an application to establish “Rogers Bank.” At the time Rogers noted that “this application is only related to the possibility of launching a niche credit card business at some point in the future.” Looks like the future is almost upon us.

Rogers and CIBC recently teamed up to launch the NFC-based suretap mobile payment service and it seems their relationship with banks is only going to get deeper. Mohamed said “Today the average Canadian carries 22 cards in their wallet… collectively we’re carrying 675 million pieces of plastic. Your wireless device already acts as your phone, your camera, your computer… in the next five years it will act as your mobile wallet. For you this means safely storing all your information in one place… from credit cards to transit passes. For Rogers it means a new business that leverages the trusted security of the SIM… we’ve already partnered with CIBC and look forward to working with all of the other banks. We’ve also applied for a bank license so we can offer a credit card to strengthen customer loyalty and retention… and of course the Rogers credit card would be one of many cards in the mobile wallet.”

Rogers notes that these changes will come within “the next five years,” but probably sooner. In the audio clip I recorded below Mohamed said they’ll be doing more to retain customers, specifically coming out with a new loyalty program. “Loyalty is one element in the customer experience and customer service in the broader sense. Because what you have is people saying ‘Now that we’ve been a customer with Rogers, with one of the products or several of the products, for sometime, how do you let me know that you value my tenure?’ When you connect the dots… it really ties into a loyalty rewards points program which will actually further reinforce this idea of ‘we value our customers, we reward our customers for staying with us and if you grow with us you’ll be even better served.”

No more specifics on the timing of the future loyalty program, but perhaps it’ll be something like sub-brand Fido’s rewards program. From the sounds of it this loyalty program will give the customer a certain amount of points based on how long you’ve been a customer, plus how many services you have… all connected somehow into a bigger mobile commerce play.