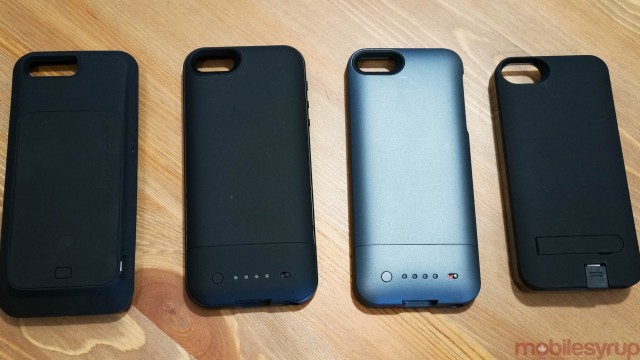 There’s an expanding trend in the market: battery life is getting worse even as phones get larger and cells are increasing in capacity. This is likely because software is doing more in the background, sucking up processor cycles and keeping network connections alive longer. While there are ways to optimize battery life on the internal cell, users are often turning to compact external battery packs to keep their phones alive.

Today we’re going to look at four iPhone 5-specific battery cases: the Mophie Juice Pack Helium; the Mophie Juice Pack Air; the PowerSkin for iPhone 5; and the Kickstarter-funded iKit NuCharge. They’re all between 1500 and 1900mAh and adhere to your iPhone in various ways, but the gist is the same: keep your iP5 alive longer, and do it without expanding your pocket. 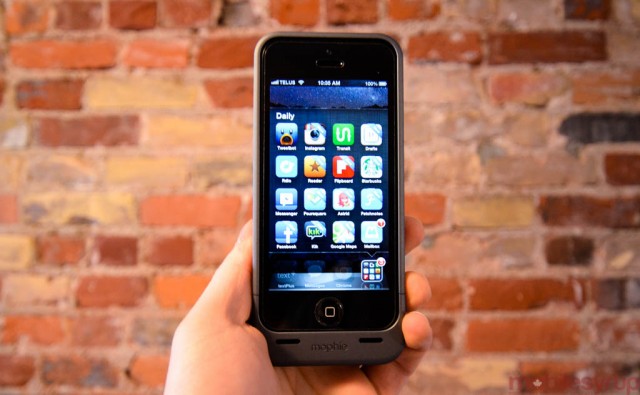 At 1500mAh, the Mophie Juice Pack Helium contains one of the smallest batteries of the four chargers, but it also boasts the smallest footprint, doubling the iPhone 5’s girth from 7.6mm to 14.98mm. While this may seem like a lot, the Helium distributes itself evenly, with a rounded matte backing that feels lovely in the hand.

Like all of Mophie’s products, the $79.95 Helium consists of two separate portions: a small bottom piece that houses the Lightning connector and power circuitry, and a larger portion in which the battery resides. I typically slide the iPhone into the top piece first and meet the power input with a satisfying click, but you can do it either way. Once connected, you turn it on from a switch on the rear; there are four LEDs to note battery level and a small microUSB port on the side for charging. 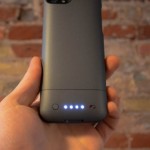 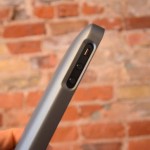 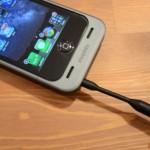 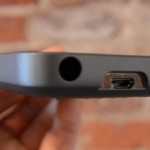 As I said, the Helium certainly adds bulk to the lithe iPhone 5, but not severely. There’s no question of whether you could use the case as your regular outfit, but it may be a bit much for day-to-day activity, especially if you’re a heavy music listener. Like the Juice Pack Air, the Helium suffers from a design decision Apple made with its new iPhone. Because much of the circuitry lies on the bottom of the case, the bottom-located headphone jack is sunk deep into the case itself, necessitating an included extension cable. It’s a small annoyance, and Mophie was not alone in this design decision, but it irked nonetheless.

As for battery life itself, the 1500mAh cell should be ample to recharge the 1430mAh iPhone to full but even Mophie admits it will only get you to around 80%. In regular use, I found the Helium to inflate the phone to around 65% from nothing before it finally gave up the ghost. Not bad by any means, but for $79.95 and physically close to the larger Juice Pack Air, it may not be a wise investment for some.

So who is the Helium for? The case really is really quite well made and certainly lighter than its $99 Air counterpart, the Helium is a great compromise between price, performance and thickness.

The Mophie Juice Pack Helium is available for $79.95 in Dark Metallic and Silver Metallic. The latter was reviewed. 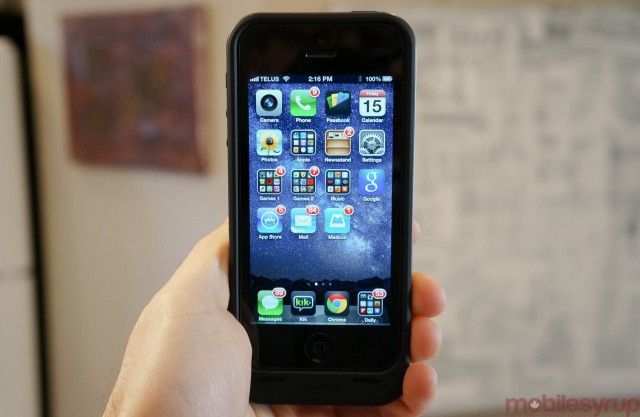 The Mophie Juice Pack Air for the iPhone 5 feels far more secure and premium than the Helium — this much is apparent from the outset. But it’s also thicker at 16mm and slightly heavier, due to a more solid construction and enclosed keys for the power button on top and mute switch/volume buttons on the left side.

Like the Helium, Mophie’s Juice Pack Air consists of two portions that slide effortlessly into one another with a solid click. The 1700mAh battery allowed me to charge up the iPhone 5 from empty to near full, but it still didn’t manage to hit that coveted 100% mark. 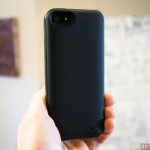 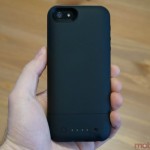 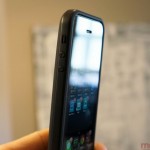 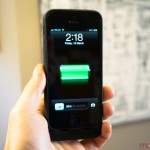 Mophie has made a great product here: the case does not bloat the iPhone 5 too much, and provides enough power to almost double your daily battery life.

The Mophie Juice Pack Air is available for $79.95 in Red, White and Black. The latter was reviewed. 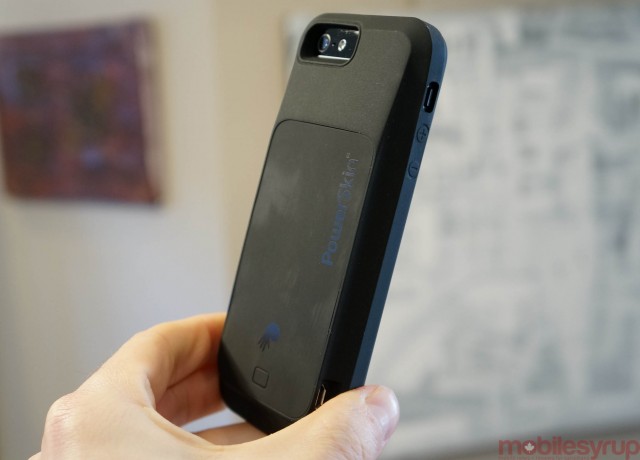 PowerSkin does things a little differently than Mophie, but it works for them. Instead of shipping in two puzzle pieces, the PowerSkin for iPhone 5 utilizes a combination of hard polycarbonate on the back and a soft rubber insert that houses the phone itself. The fit isn’t at snug at the Juice Pack brothers but it feels more natural than either one.

The 1500mAh battery is housed in the back, with a sloping design that I really liked; the top tapers outward toward the polycarbonate shell. There is a small button below the PowerSkin logo indicating charge levels and a small microUSB port on the right of the case for charging. 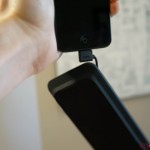 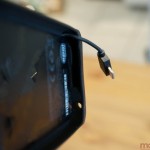 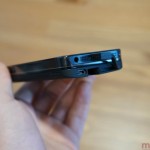 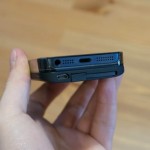 The Lightning connector is attached by a cord, so it’s easily inserted and removed. But PowerSkin took any potential looseness into account by building a notch into the bottom of the case where the connector and cord live. It’s a great solution, to be honest. The PowerSkin suffers the same issue as the Mophies in that it needs an extension cord for most headphones, but that’s a small price to pay.

As for battery life, the PowerSkin performs similarly to the Juice Pack Helium: well, but not wonderfully. I managed to eke out a bit more life from the PowerSkin than the smaller Mophie, but the different was negligible. It got my iPhone 5 from zero to 68% before dying. It is also 16.5mm at its thickest point, but because the PowerSkin tapers it gives the impression of being much thinner.

I prefer the PowerSkin to the Helium in terms of design and performance, and for $79.99 it matches it in price. 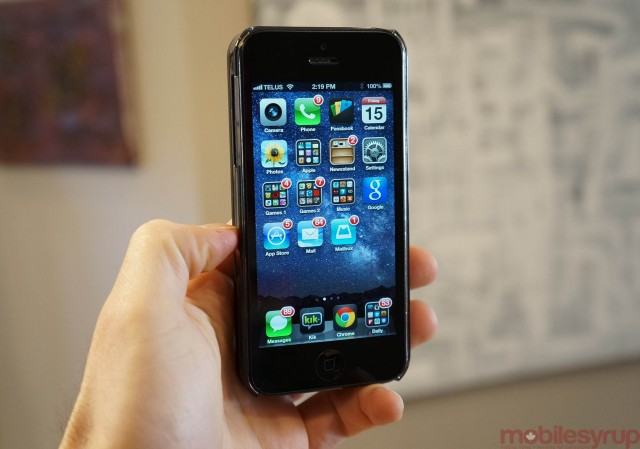 The NuKit from iCharge is an interesting hybrid case, currently in prototype and available for preorder on Kickstarter. The company wanted to make a better battery pack that, in a snap, could double as a classy “regular case.” To this end, iCharge designed the NuKit to be modular, with a simple plate on which various covers — including the 1900mAh battery pack — would slide.

Unlike the Mophies and PowerSkin, there is no ungainly height addition to the phone, mainly because the Lightning charger is tucked into the battery pack until it is in use. 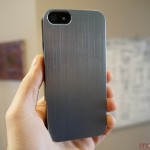 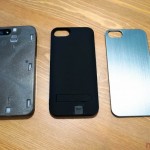 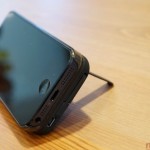 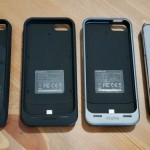 The beauty of NuKit’s design is that even with the battery attached it still looks and feels like a regular iPhone case, just one with a big booty. The 1900mAh cell also means it will charge your iPhone to nearly 100% from zero, though like the others it didn’t quite reach that milestone. At 16.7mm, it is only a smidgen thicker than the Juice Pack Air but is significantly less tall, which makes up for it.

The prototype I received came with one replacement cover, which slides down onto the base. The iPhone itself sits in a lovely felt housing, though the clear plastic sides look and feel a bit cheap. We’ve been told the materials and finish are subject to change before shipping in April, so we’ll see.

NuKit also comes with a kickstand, though it feels so poorly constructed and flimsy that I’d avoid using it altogether. Nevertheless, iCharge’s NuKit is a wonderful interpretation of an old idea, and for $79 the whole package seems inexpensive.

The Kickstarter campaign has already been funded, but backers pay $20 less ($59) than retail, so you might want to get on it if you’re interested.