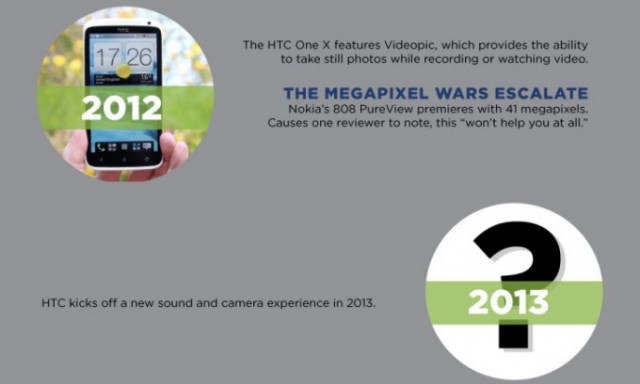 HTC is rumoured to launch its M7 flagship at a huge event in New York City on February 19th. In addition to a 1080p display and a super-fast 1.7Ghz quad-core chip, the company plans to improve its digital imaging reputation by replacing megapixels with ultrapixels.

In theory, the new name is likely just marketing speak, but the idea here is similar to what we saw in Nokia’s PureView 808: interpolation. The plan is to take take three layers of 4.3MP sensors and combine pixels into a comparably smaller-sized shot that is less noisy, especially in low-light situations.

HTC is also claiming it will improve its sound experience in 2013, though the company had already taken the lead in this regard by combining Beats Audio and a powerful headphone amplifier into its latest products.

So what will we see on the 19th? HTC needs to reserve its market share slide, and the only way it will do that is with a tremendous product, a huge marketing campaign and, above all else, a close launch relationship with carriers worldwide.

We’ll be in New York covering the event, so you can be sure Canadian carriers are salivating in anticipation of this new Android phone. With the Sony Xperia Z coming shortly, and the Samsung Galaxy S IV expected in May, the smartphone market looks to continue its record growth in 2013. Competition is good, and we hope HTC can pull off a win.

HTC One facing delays because company is no longer a priority: WSJ