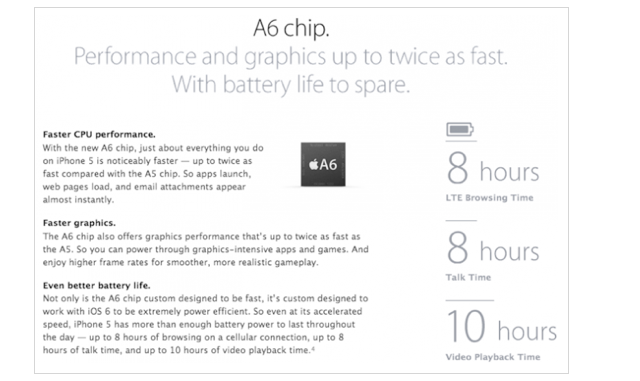 While Apple didn’t sweat the details when it came to its upgraded A6 chip during the iPhone 5 announcement yesterday, it claimed that performance was twice as good as the A5 in the iPhone 4S. The performance increases apply to both hardware and software, leading the tech world to believe that they may have beaten all other vendors in bringing a Cortex-A15 chip to market. The A6 is rumoured to be fabricated in Samsung’s Texas manufacturing facility using the Korean company’s 32nm LP HK+MG process.

While Qualcomm’s Snapdragon S4 “Krait” line is derived off ARM’s Cortex-A15’s design, and bears some resemblance in terms of power consumption, dual-core performance and integrated LTE, no products on the market use ARM’s actual chip design.

The iPhone 5 may have clocked the A6 at a slower clock speed than what ARM recommends for optimal performance, but Apple needed to ensure that its new flagship maintained the same or better battery life as its predecessor. The GPU is rumoured to be the same PowerVR SGX543 GPU as the iPhone 4S, but with four cores instead of two. This could theoretically increase graphics performance up to 2x like was claimed in the press conference.

In all, regardless of whether Apple is heavily pushing the A6 as an integral part of the iPhone 5 experience, its existence means that Cortex-A15 is close to coming to market, and Android phones should follow suit in the next few months with the cost- and size-saving offerings from Texas Instruments, Samsung and more.