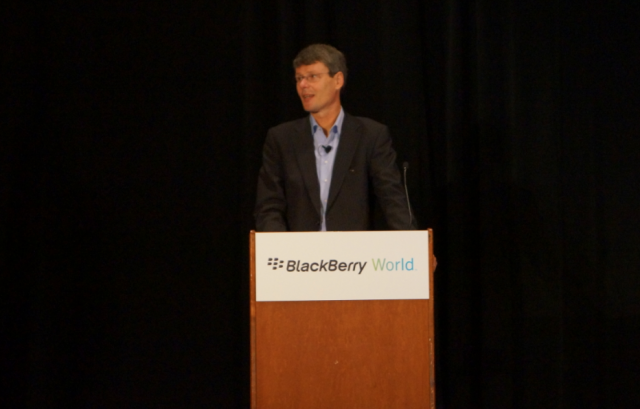 RIM has been in the news a lot today: a $20 discount on the WiFi PlayBook; the launch of a new LTE-capable PlayBook tablet on Rogers, TELUS and Bell; a new version of the PlayBook OS.

But perhaps the most important news is what may need to happen to BlackBerry 10 next year. Thorsten Heins, RIM’s embattled CEO, gave an interview to the U.K.’s Telegraph newspaper and gave some grave news:

“We don’t have the economy of scale to compete against the guys who crank out 60 handsets a year. We have to differentiate and have a focused platform. To deliver BB10 we may need to look at licensing it to someone who can do this at a way better cost proposition than I can do it. There’s different options we could do that we’re currently investigating.”

The company knows it is not the behemoth it was at its height in 2008. In fact, with its share price sitting under $7 right now, which means the company’s market cap is a little over $3.5 billion. If licensing BB10, which is going to be a great operating system, is the best course of action for the company, all the power to them. But which OEM will take up the cause over Android?

Heins continues: “You could think about us building a reference system, and then basically licensing that reference design, have others build the hardware around it – either it’s a BlackBerry or it’s something else being built on the BlackBerry platform. We’re investigating this and it’s way too early to get into any details.”

So we may see BlackBerry 10 turned into a white-label OS of sorts, able to be used by various manufacturers for their own ends, much like Windows Phone is today. Except that Microsoft sets extremely rigid guidelines on what can be changed; perhaps RIM will be more amenable to letting OEMs change certain aspects of the software to better suit the hardware.

All shall be revealed in the coming months…

Source: The Telegraph
Via: N4BB