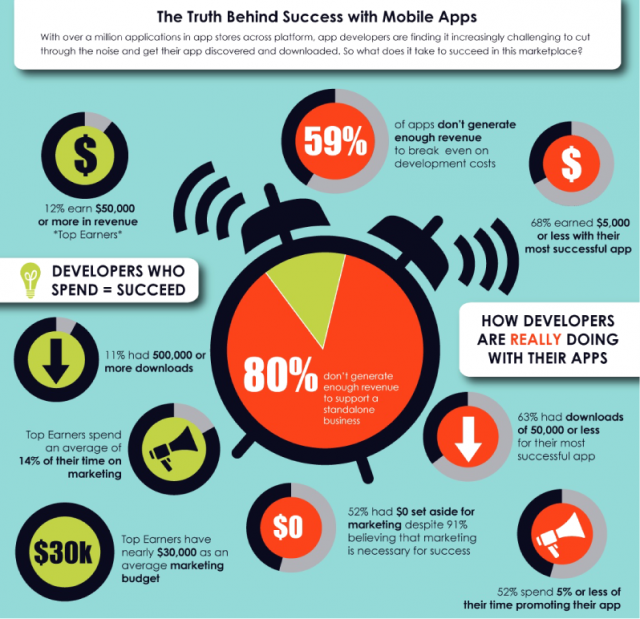 Many developers believe that by building a great app, users will flock to it organically. While occasionally this is the case, the majority of app developers do not make enough money to recoup their initial investment, and 80% of the time the revenue from their most successful app isn’t enough to sustain a business.

App Promo, a self-professed marketing company, performed a survey of over 100 app developers and concluded that 59% of them were not making money from their apps. The indirect goal of the survey is to promote app marketing, but the takeaway is the same: promotion is essential to an app’s success.

According to App Promo, “The top earners in the group are seeing success because of the time and money they spend on marketing their mobile applications. The top earners represent 12% of participants who earned $50,000 or more with their most successful app. This group spent the most effort on marketing with an average of 14% of their time dedicated to promoting their app and also had nearly $30,000 set aside as the average marketing budget. This is a stark comparison to 52% of participants who spent as little as 5% or less of their time on promotion and had a marketing budget of $0.”

The upshot is that companies who are able to prosper via word of mouth alone usually have a lot more money in the bank at the end of the day. But examples of those — Instagram in particular — are few and far between. It also doesn’t break down who they surveyed, as that top-earning 12% could be larger development houses with sizeable marketing budgets. Nor does it differentiate between operating systems, though presumably the majority of those surveyed are developing for iOS.

Some of the most insidious ways of advertising apps are with daily deal services such as FreeAppADay, which partners with apps to boost their one-day sales in order to see them rise in the charts. Socialcam, one of the upcoming “Instagram for video” services, seems to have bought its way to the top of the iOS charts this way.

Nevertheless, there is some good info to take away from this, and if it can help dev houses earn more money in the long run, more power to them.