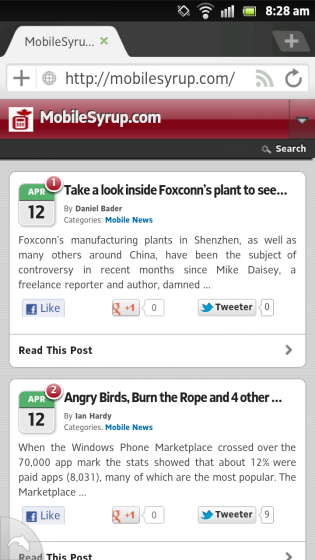 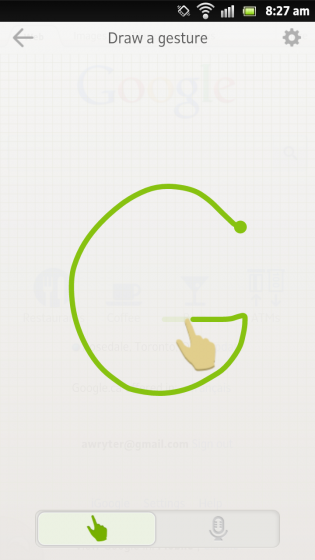 Dolphin Browser HD has been one of the most popular third-party Android browsers for a long time now, and has only improved since it was purchased by MoboTap, reaching version 8.0 today. While this isn’t the complete redesign many were hoping for, it makes improvements in the areas that were either ugliest or most-used.

For starters, the often-maligned gesture bar has been tweaked with a new icon on the bottom left and easy access to the new Sonar feature, in addition to traditional drawn gestures. The company found that users were using the voice-activated Sonar feature more than its drawing-based alternative, so they have made it the default form of input when the button is pressed. From my time using Sonar, which allows you to search using your voice, it works quite well, but does not handily beat Google’s own voice search that is built into the OS.

The company has overhauled its menu system, too: swiping from left to right at the edge of a web page will bring up the new bookmarks bar, which is cleaner than in previous versions, while swiping right  to left shows the new Add-on Sidebar. Dolphin has gotten quite well known for its add-on system, which is very much like the extensions you’ll find in Chrome or Firefox. From Lastpass to Read it Later to Translate, there are now dozens of add-ons to suit everyones’ needs. Many of them are merely portals to existing web pages, but some, like Lastpass, are quite useful.

Another nice addition to the app is the new context menu when you press and hold your finger on a page. You are now given three options: Select Text, Find on Page, or Close Tab. Selecting text will allow you to copy, search, share or translate that particular section of text. It’s very much like what Apple has incorporated iOS on a larger scale.

Overall a nice update to a free product, and with its Dolphin Sync you can keep your browser tabs, settings and bookmarks synced across devices.