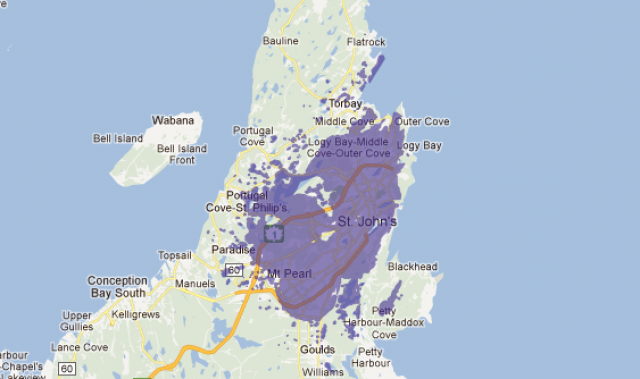 Canada’s largest wireless carrier has a goal to bring LTE speeds to 20 million “by the end of 2012″ and today they once again expanded their coverage. St. John’s, Newfoundland, has been granted LTE speeds and can get “theoretical download speeds of up to 100 Mbps”, but you’ll actually witness “typical download speeds ranging from 12 Mbps to 25 Mbps”. The coverage map is above and looks pretty decent, but also seems this is the coverage area you can expect to see for some time. The Rogers site shows no future coverage expansion in the area.

Rogers LTE network now reaches 11 million Canadians and they plan to rollout into over 25 more cities this year (most likely depending on the upcoming 700Mhz auction), including “Halifax and surrounding areas… in the next few months”.