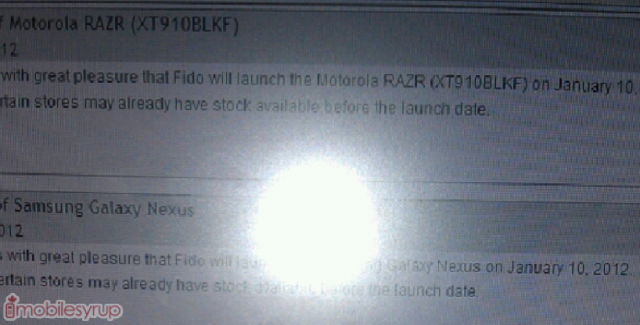 Bell and Virgin came out swinging a few weeks ago with the exclusive release of the Samsung Galaxy Nexus, the world’s first device to be graced with Google’s Android OS 4.0 Ice Cream Sandwich. During their exclusive release both Rogers and TELUS announced that they would be releasing the sought after device in January. Good news has come forth today as we’ve been given word that Galaxy Nexus will be making its way to both Rogers and Fido on Tuesday, January 10th. According to this internal doc it states that stores will be receiving them shortly and it’ll be widely available for sale in just 1-week. We have no word on the price points, but will most likely be the same as what Bell and Virgin are selling it for: $159.99 on a 3-year, or $649.99 outright. In addition, no indication from TELUS if this will be their launch date.