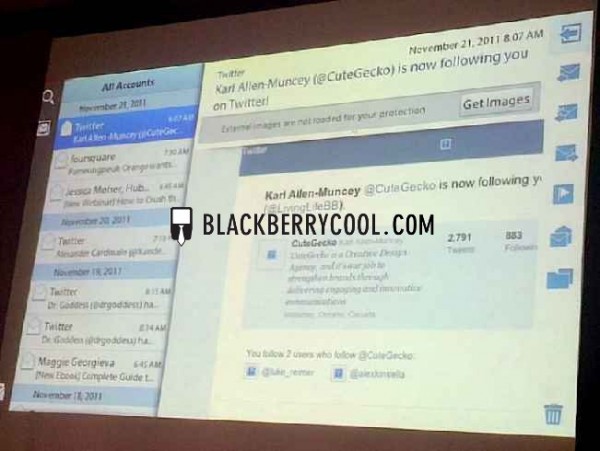 We know it’s a long, cold winter between us and February, but for you Playbook owners there is a glimmer of hope through the evergreen trees. On Tuesday, at the BlackBerry Innovation Forum, RIM gave the first looks at what will eventually become email, calendar and contacts apps for the tablet which, if the company has anything to do with it, will sell a lot more briskly with that $300 off price tag.

According to the first-hand report, the email application looks about ready to go, with comparable features to what is currently available on the BlackBerry OS, just with some lovely tablet flare. The calendar app makes it easy to see what you have coming up on a particular day, while contacts are powered by Gist’s social media consolidation features.

With the price cuts and the upcoming feature set, the Playbook should experience a renaissance of sorts when OS 2.0 is released in February, 2012. Until then, RIM is hoping some more people jump on the bandwagon. There also looks to be a keyboard accessory readying for launch around the same time.