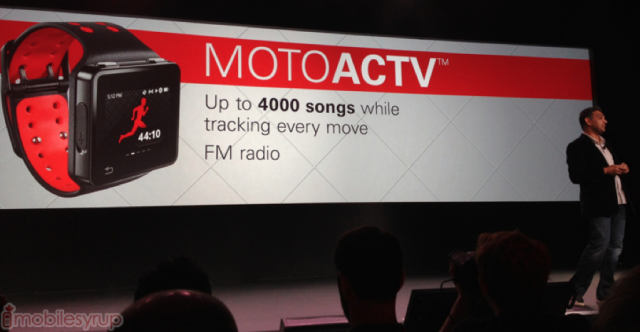 The rejuvenated Motorola RAZR will be coming to Canada through Rogers, just “in time for the holidays”. After the event there was a round table discussion that featured Sanjay Jha, Motorola Mobility CEO, and Michelle Digulla, President, Motorola Mobility Canada and there was some interesting conversations.

The RAZR, according to Digulla, will be a “hero” phone for Rogers and we can expect it sometime at the beginning of November. No prices were revealed but this is currently up for pre-order for $149.99 on a 3-year. As for other Android devices coming to Canada, the answer is yes, but no details on what we can expect – most likely the ATRIX 2. From a tablet perspective, there were rumours that the Xoom 2 might make an appearance, but that didn’t occur. In fact, us Canadians will not receive anymore tablets this year from Motorola, but will be getting a 4G LTE tablet in 2012 (probably the Xoom 2).

Finally, us Canadians can also expect to see MOTOACTV “sometime in Q4”. MOTOACTV is a 1-inch touchscreen Android that’s dubbed as the “ultimate fitness player”. It’s a combo of a music player (hold over 4,000 songs), health monitor that’s designed for exercising, and it also can be paired with your smartphone to answer calls, receive text messages and view calendar notifications. No word on the prices or distribution but in the States the 8GB will retail for $249 and the 16GB for $299.