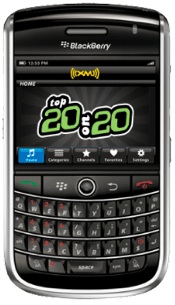 XM states “Soon you’ll be able to enjoy premium-quality audio on your BlackBerry device. With XM online+ you’ll have access to the music, talk, sports and entertainment you want wherever you want it. Just hit play and enjoy.” There is a 14-day trial but after there’s a charge of $7.99 a month or only $2.99 a month when bundled with a XM Canada subscription.