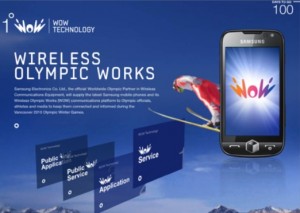 Samsung announced public availability of its Wireless Olympic Works (WOW) communications platform, a app that gives you up to date info such as Olympic news, schedules, results and medal standings during the Vancouver 2010 Olympic Winter Games.

The application is free to download to from any of Samsung’s smartphones that supports Windows Mobile 6.1 or 6.5 operating system. The app can be download now and will operate on a limited capacity until the Games officially begin on February 12th. You can check it out here at the dedicated site: samsung.com/vancouver2010

Paul Brannen, General Manager, Mobile Communications, Samsung Electronics Canada said “Our focus for the Vancouver 2010 Olympic Winter Games is on creating exciting experiences for Olympic fans around the world using Samsung technology to link consumers to the games. Samsung will connect fans through its WOW technology, mobile phones and website, making it possible for real-time updates and to share and celebrate their favourite Olympic ‘WOW’ moments with friends and family in their networks.”