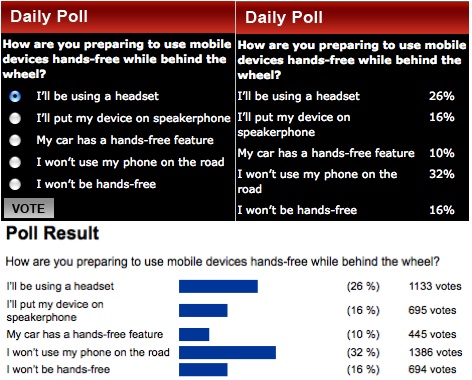 CP24 is conducting a poll for the upcoming Ontario ban of using hand-held devices while driving. The question asked is “How are you preparing to use mobile devices hands-free while behind the wheel?” In this poll you have a choice of selecting:
– I’ll be using a headset
– I’ll put my device on speakerphone
– My car has a hands-free feature
– I won’t use my phone on the road
– I won’t be hands-free

With just over 4,300 total votes the top vote with 32% is “I won’t use my phone on the road”, followed by “I’ll be using a headset” at 26%. The ban goes into effect this Monday, October 26th. If  you live in the GTA just a reminder that the Toronto Police will be conducting “enforcement blitz” to educate and inform drivers of the new law.