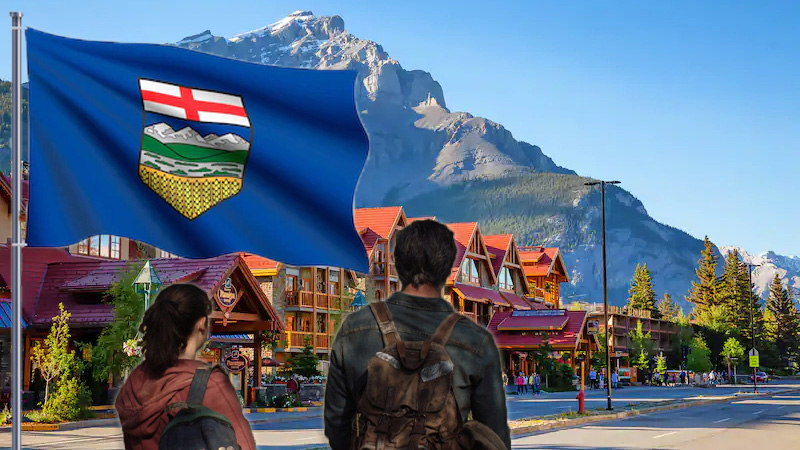 HBO’s The Last of Us has been getting rave reviews for being not only one of the few quality live-action video game adaptations, but a genuinely good series in its own right. It’s even won over some cynics. By all accounts, the PlayStation game adaptation is looking to be the next tentpole HBO series alongside the likes of House of the Dragon, The White Lotus and Succession.

Best of all? It was filmed entirely in Canada. From July 2021 to June 2022, the show was shot across none other than Alberta, a nice change of pace from the many Toronto and Vancouver productions. What’s more, it has a Game of Thrones-level budget of at least $100 million USD (about $133.8 million CAD), which is believed to be the biggest TV production in Canadian history.

In many ways, then, the series serves as a showcase for the province as a whole — not just its vistas, but its talented crew members and actors. On top of that, the game has a sprawling story about a smuggler named Joel (Pedro Pascal) who must escort scrappy teen Ellie (Bella Ramsey) across a zombie-infested U.S., so we get to see a variety of locations and climates.

With that in mind, here are some of the Alberta filming sites to keep an eye out for in The Last of Us:

Without getting into spoilers, the first episode of the series partially takes place years before the collapse of humanity, so we get to see a lot of normal residential areas. These scenes, which include Pascal, Nico Parker (Joel’s daughter, Sarah) and Gabriel Luna (Joel’s brother, Tommy), were filmed in Calgary.

The last of us by HBO filming set caught today on 5th street in Calgary pic.twitter.com/FNzZweBLwU

Many of the post-pandemic scenes in the show, particularly those involving highways overrun by foliage, were also shot around Calgary. Northland Village Mall, in particular, was given the post-apocalyptic treatment for the show, presumably to adapt flashback scenes from The Last of Us: Left Behind (a 2014 expansion to the original game) featuring Ellie.

Additionally, the city’s Mount Royal University and SAIT — expected to stand in for key scenes set at a Colorado school — make appearances.

Jackson community is coming to life in Canmore. The town is gaining details characteristic of The Last of Us universe.

The little Albertan town played host to The Last of Us in a big way. As co-creator and showrunner Craig Mazin told us in an interview, Canmore was chosen for being a “dead ringer” for Jackson, Wyoming, a key setting involving Joel, Ellie and Tommy.

Separately, Pascal and Ramsey also both told us how Canmore was their favourite location out of the whole shoot, with the former saying “every inch of Canmore was just this magical little town… with really great fudge.” (Alas, we didn’t have time for a follow-up question, so it’s currently unclear where, exactly, Pascal was getting his fudge.)

It remains to be seen which episode(s) will feature Canmore, but expect to see the “magical little town” pop up a bit later in the series.

Of course, the provincial capital also features in the show for a number of Boston locations, including the Alberta Legislature Building standing in for the city’s Capitol. You’ll first see Edmonton pretty quickly in the show — the first two episodes, specifically, in scenes with Pascal, Ramsey and Anna Torv (Joel’s friend Tess).

With a population of around 3,000, Fort Macleod is perfect for “small-town” scenes. In the case of The Last of Us, one of the key moments from the Texas-set prologue was shot here.

The Last of Us filming in High River, AB

Ramsey name-dropped High River to us, which was used to adapt a pivotal scene from the original game’s prologue. (If you know, you know.)

Photos from the set of The Last of Us in Waterton Village.

Lakeside Resort:
"The cars had Colorado plates on them."

In our interview, Ramsey shouted out this snowy location, which was home to the production for a few days as a stand-in for Colorado.

Of course, this only touches on some of the many Alberta locations featured in The Last of Us, given that it was a major year-long production. Looking at even a few of these, though, makes it clear how much of a role the province played in bringing a beloved video game to life. In fact, Pascal even told us that he felt it was “essential” there, praising the crew and other locals.

“I feel like being there was essential to the experience — that we couldn’t have done it anywhere else,” said Pascal. “Physically, for one, but also for our crew and the warmth and the dedication and everybody really in it together and caring as much. There wasn’t a fraction of apathy in the entire experience, and honestly, it felt Canadian to me.”

The Last of Us will begin streaming exclusively on Crave in Canada on January 15th.

For more on The Last of Us, check out our review of the series and interview with several of the cast and crew, including Pascal, Ramsey, Mazin and co-creator Neil Druckman. We also have a review of The Last of Us Part I, last year’s remake of the original The Last of Us game.