Vanessa Chia, Cococucumber co-founder, director and producer, on the studio's evolution, what it's like to get multiple shoutouts by the head of Xbox and the team's latest game, Ravenlok 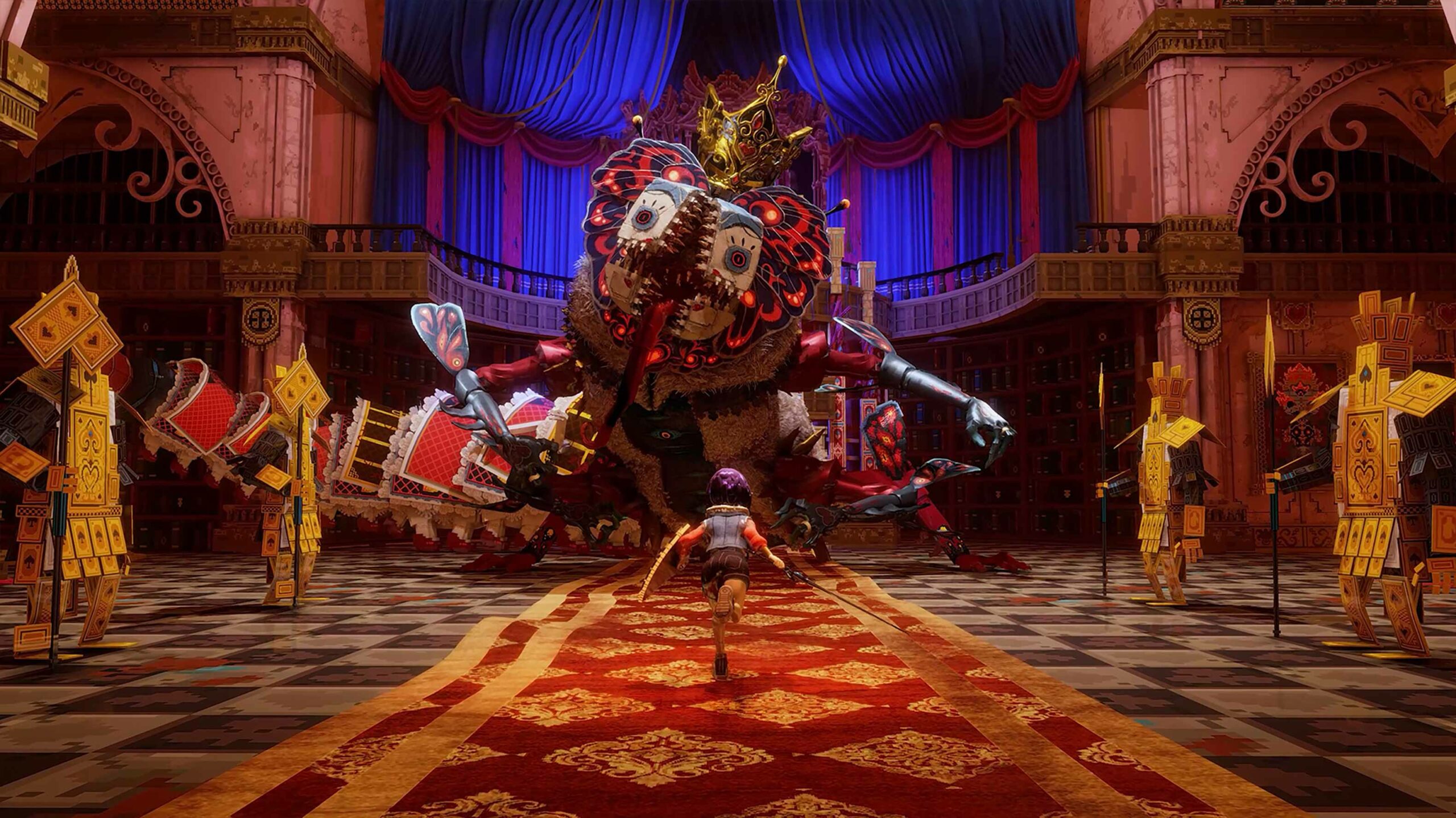 Toronto-based Cococucumber is quite the prolific indie game developer.

In the span of eight years, it’s made four remarkably different titles: the 2013 whack-a-mole experience Bunny Bonker, the 2015 platformer Planet of the Eyes, the 2017 co-op-supported dungeon-crawler Riverbond and the 2019 retro-inspired turn-based RPG Echo Generation. And for its next trick, Cococucumber is set to release Ravenlok, a fantasy action-RPG, in 2023. It’s an impressively varied portfolio, especially for a small team, and a key reason for that success boils down to Vanessa Chia, studio co-founder, director and producer.

Speaking to MobileSyrup over email, Chia says Cococucumber has been a great way to mix her design background with the inspiration she’s found from all of the indie games that started coming out in the early 2010s.

“I fell in love with the immersion that comes from getting lost in a game and all the new creative avenues that were getting explored,” she explains. “Something about the long-form nature of games appeals to me — it allows more room for things to breathe and to explore ideas in more depth.”

Four games and eight years later, Cococucumber is approaching its tenth anniversary in 2024, which Chia says is “mind-blowing.” Reflecting on all of this, she acknowledges that the studio didn’t initially expect to strike such a consistent output.

“Coming from a creative background, there’s an understanding that crafting imaginative worlds takes time. It requires a lot of patience and a lot of trust in the process. In order to do all of the creative stuff effectively, there’s the organizational and admin side that needs to happen, which for me has been a massive learning curve,” she says.

“With each game, we like to experiment with a few things and set ourselves some new creative challenges. While not everything has worked out as expected, it’s important to be able to change and adapt to keep things interesting and to increase our chances of success in a hit-based industry.”

She also gives a “massive shoutout” to Martin Gauvreau, her Cococucumber co-founder and fellow director. “He’s responsible for so many out-there but ‘you know, it could work out…’ ideas that are challenging, but in a good way!”

Clearly, it’s been working. Each of the studio’s games have garnered positive reception, with Echo Generation, in particular, being honoured several times at the Canadian Game Awards and Canadian Indie Game Awards earlier this year and even getting multiple shoutouts from both Microsoft Gaming CEO Phil Spencer and Xbox corporate vice president Sarah Bond.

When asked about the team’s response to all of this acclaim for Echo Generation, in particular, Chia responds with deep gratitude, noting that it’s “very validating for the team and it means a lot when we’re working on something for years for it to connect with players” upon release.

“If you think about the general pitch for Echo Generation — it’s an adventure game with turn-based combat and a retro adventure game vibe — it could come across as a bit niche, so we are surprised by its success and really appreciative of all of the love.”

Of course, it’s also not every day that Xbox top brass singles out your game by name, and Chia says it gave the team “an incredible boost” in morale. “In an odd way, it made us look at the work we did on Echo Generation in another light. While it’s exciting and validating, at the same time we’re feeling the pressure of expectations now, which we hope to deliver on with Ravenlok.”

“Alice in Wonderland meets Spirited Away“

Cococucumber first unveiled Ravenlok earlier this summer during the Xbox & Bethesda Games Showcase, and, in keeping with the team’s versatility, it looks quite different from past works. In the game, players assume the role of the eponymous teen as she falls through a magical mirror into a fantastic-but-corrupted land, which she must liberate from the villainous Caterpillar Queen.

Besides the genre shift to action-RPG, Ravenlok‘s premise is quite different from previous Cococucumber titles. While Echo Generation had supernatural elements, it was rooted in a small town; think Stranger Things with a fictional Canadian setting. Ravenlok, however, takes the opposite approach and brings a normal girl into a surreal world. According to Chia, the concept for the new game went through “many, many iterations,” with the current version actually being “the closest to the original pitch” — to create “a cinematic ‘Alice in Wonderland meets Spirited Away‘ game with real-time combat.”

Chia says the team “wanted to make an action-RPG because it builds upon some of the things we worked on with the turn-based combat in Echo Generation.” She adds that Riverbond’s dungeon crawling and arcade elements will also feature in Ravenlok, albeit with “added complexity” due to the new third-person perspective.

In the original Xbox Wire announcement post for Ravenlok, Chia also said the game is a “heartfelt” story “of empowerment, overcoming challenges and learning the confidence to walk your own destiny.” When asked to elaborate, Chia points out that the game’s coming-of-age tale hits close to home for the team.

“One of the narrative goals in Ravenlok is to tell a story like Alice in Wonderland but where the female protagonist is not a passive character,” she explains. “She goes through an emotional arc to become stronger in a coming-of-age story since our protagonist is young, around 15 years old. Most of our current team identify as women, so her story and the game’s message is important to us, but an extremely difficult thing to get right.” 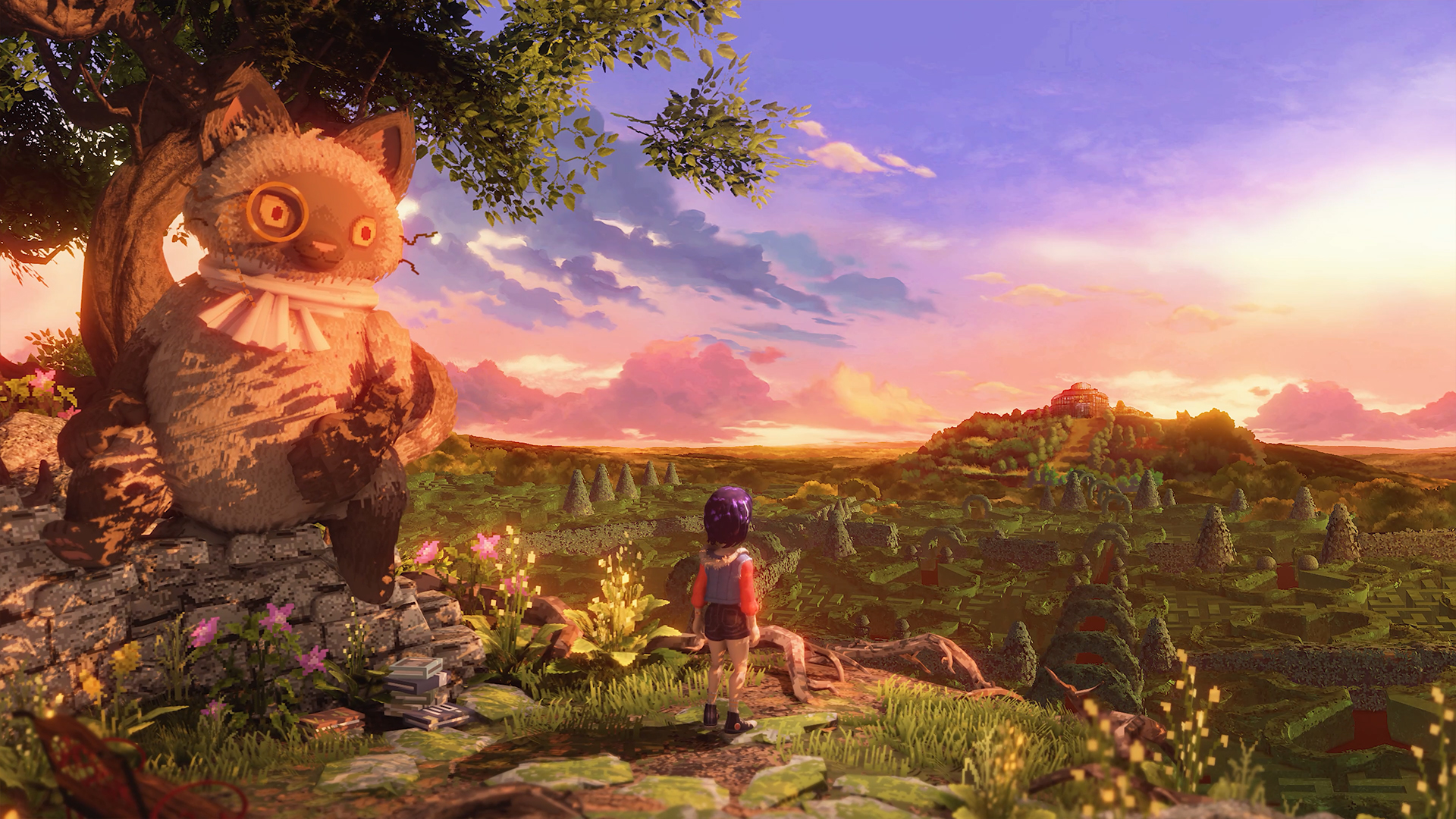 Our young heroine finds herself in a strange and foreign land.

Ravenlok‘s narrative resonates further with Chia and the team because of the titular character’s background.

“While not explicit, our protagonist comes from an Asian family, which reflects the backgrounds of many on our team. You could say we put a lot of ourselves into these characters, and it’s something that we encourage the team to do,” she says. “Personally, the theme of home – what is home or the idea of returning home – is something that resonates with me and a theme that I hope to explore in Ravenlok.”

Of course, the team also looked to “many” other works of fiction. “We’re referencing classic fairy tales like Labyrinth, The Lord of the Rings, The NeverEnding Story and Over the Garden Wall,” she says. “For the story, we took a look at The Chronicles of Narnia and The Wizard of Oz. The works of Studio Ghibli are a great inspiration, especially Spirited Away and My Neighbor Totoro.”

Crafting the look and feel of Ravenlok

What Ravenlok clearly does have most in common with past Cococucumber works, though, is its art style. Specifically, it’s the final entry in what the studio is calling its “Voxel Trilogy,” which includes Riverbond and Echo Generation. Chia has a fondness for this art style, which “has its charm — it’s retro and nostalgic,” she says. “Voxel art has its roots in pixel art brought into a 3D dimension. It has its quirks, like how certain characters can come across looking very noisy because of the blocky-ness of the asset. But I find that there’s a lot of potential in this art style and am inspired by it.”

Having three consecutive games that have similar aesthetics also helps illustrate just how much Cococucumber has grown over time. 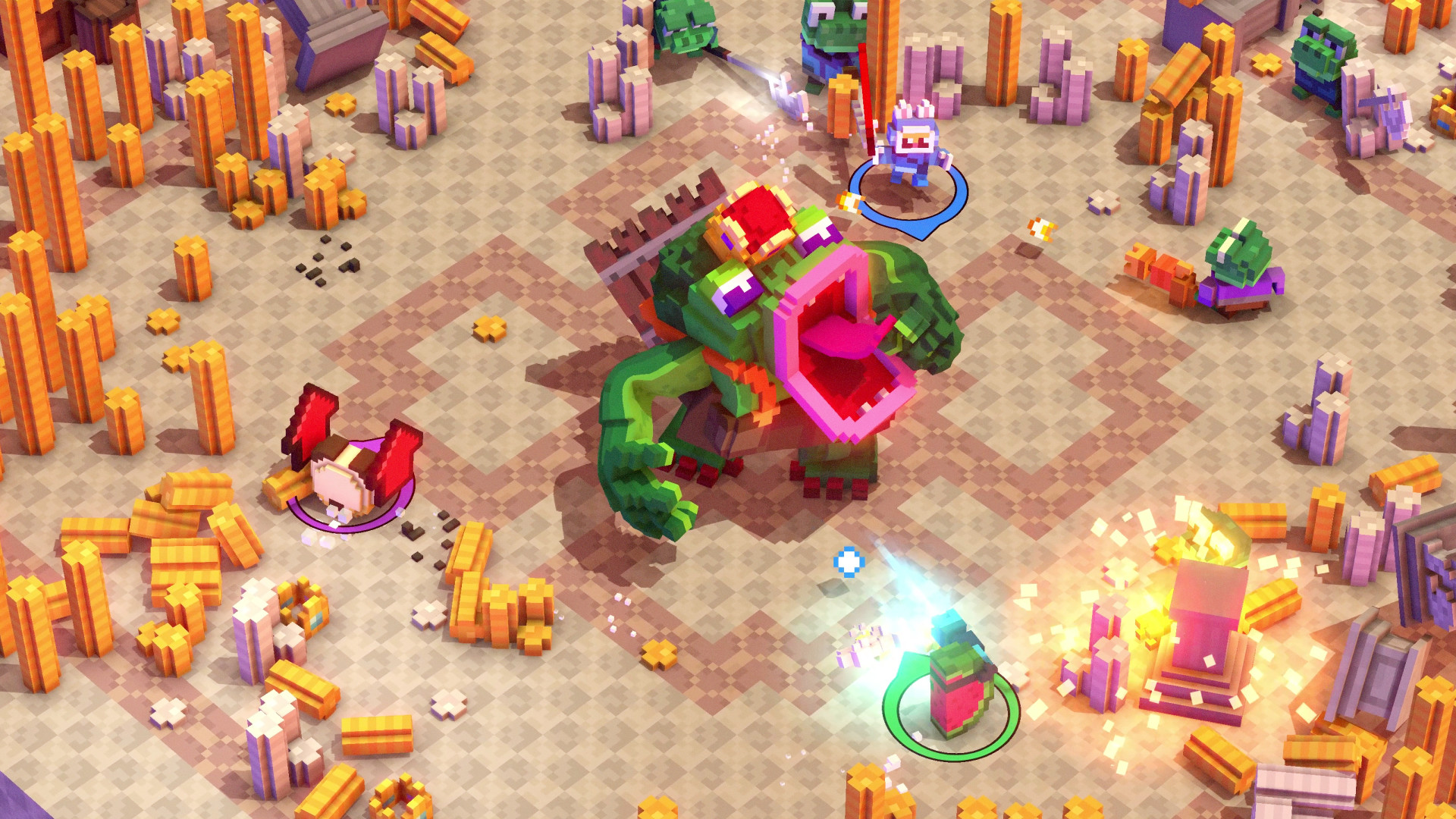 “If you compare the voxel-ness of Riverbond, Echo Generation and Ravenlok, there is a gradual progression of moving into a more stylized realism with 3D pixel textures,” Chia says. “The models are progressively more complex with higher resolution. Some people may find this voxel artstyle a little strange or that it takes getting used to — but we’re not voxel purists, this artstyle is meant to be an expression of how we evolve through our games. It also keeps things fresh for us and works wonderfully well in the topsy-turvy world of Ravenlok.”

Another element that Ravenlok has in common with Echo Generation is its unique and varied boss design. In Echo Generation, you’d be fighting a group of raccoons or secret agents in your neighbourhood in one moment and then venture out and face a giant mech or horrifying ghost in the next. That array of enemies looks to have carried over into Ravenlok, which, as seen in the reveal trailer, features the likes of a sickly tall fungal creature, winged automaton and the aforementioned frightening regal caterpillar.

Chia says the team’s goal with bosses is to make them “dramatic and rewarding,” thus requiring “more time and iteration” than some of the other design elements. 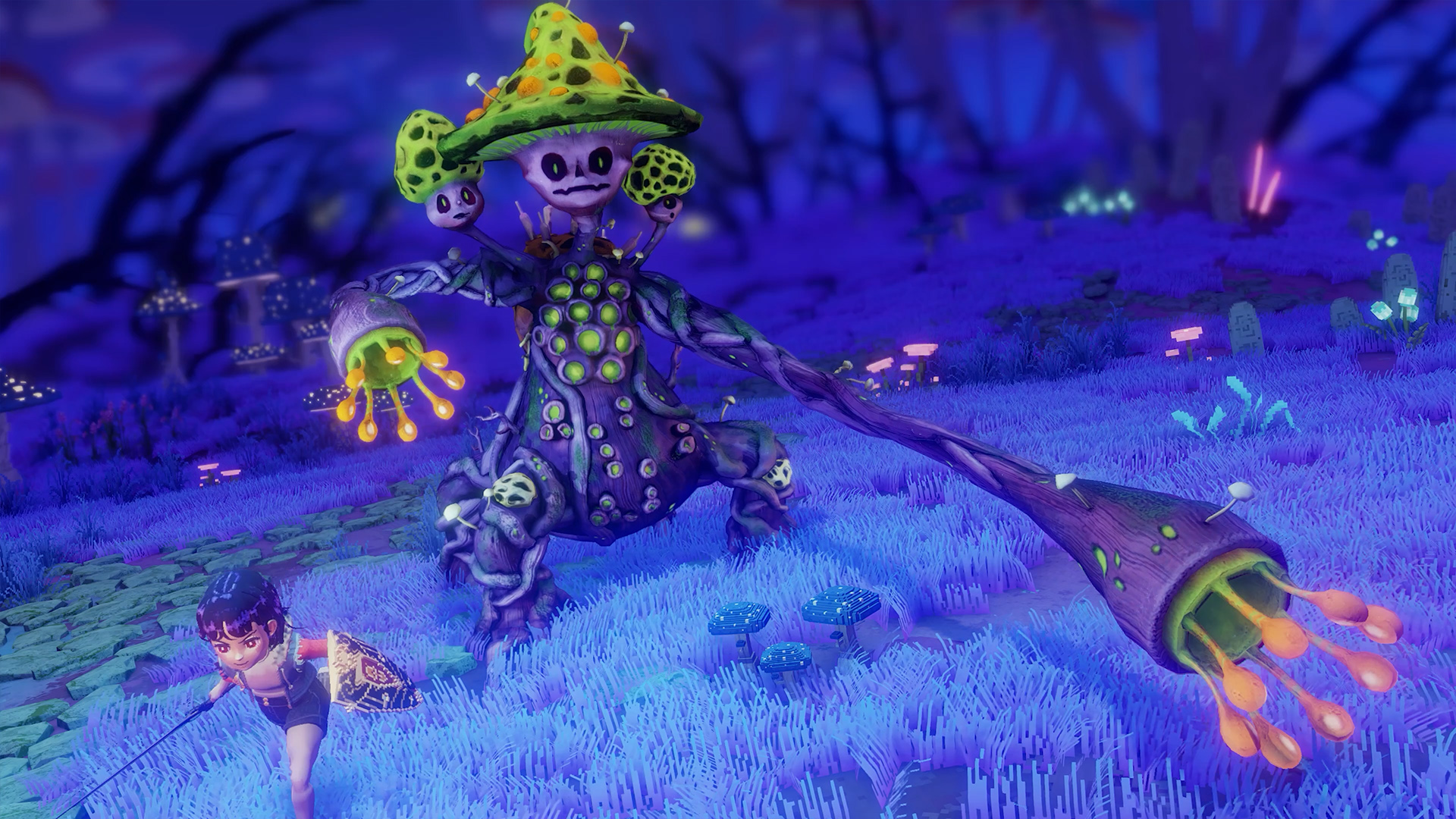 “In terms of process, we start with a general discussion about who they are and what they want. We look for references, then when we find a direction, it goes through modeling, texturing, rigging, animation, implementation, playtesting and tweaking,” she says. “There have been quite a few bosses in Echo Generation and Ravenlok that have had an upgrade where we add more details to the model and textures. This tends to happen mostly when we are near the end of production if we find some time and want to make the bosses look scarier or imposing.”

All in all, Ravenlok is shaping up to be another charming and compelling RPG from Cococucumber. But before we wrap up, there was one question left to ask Chia: will Ravenlok have any of the Canadian Easter eggs and touchstones that made helped make Echo Generation such a delight?

“The real-world home of Ravenlok is set in an unspecified place in rural Canada, does that count?” Chia coyly responds. “As for an Easter egg, I’ll say that Bob the Frog [who was in Riverbond and Echo Generation] will probably make an appearance again. As for more, you’ll have to play the game to find out!”

Ravenlok will release on Xbox consoles and PC in early 2023. It will also be available on Xbox Game Pass on day one.