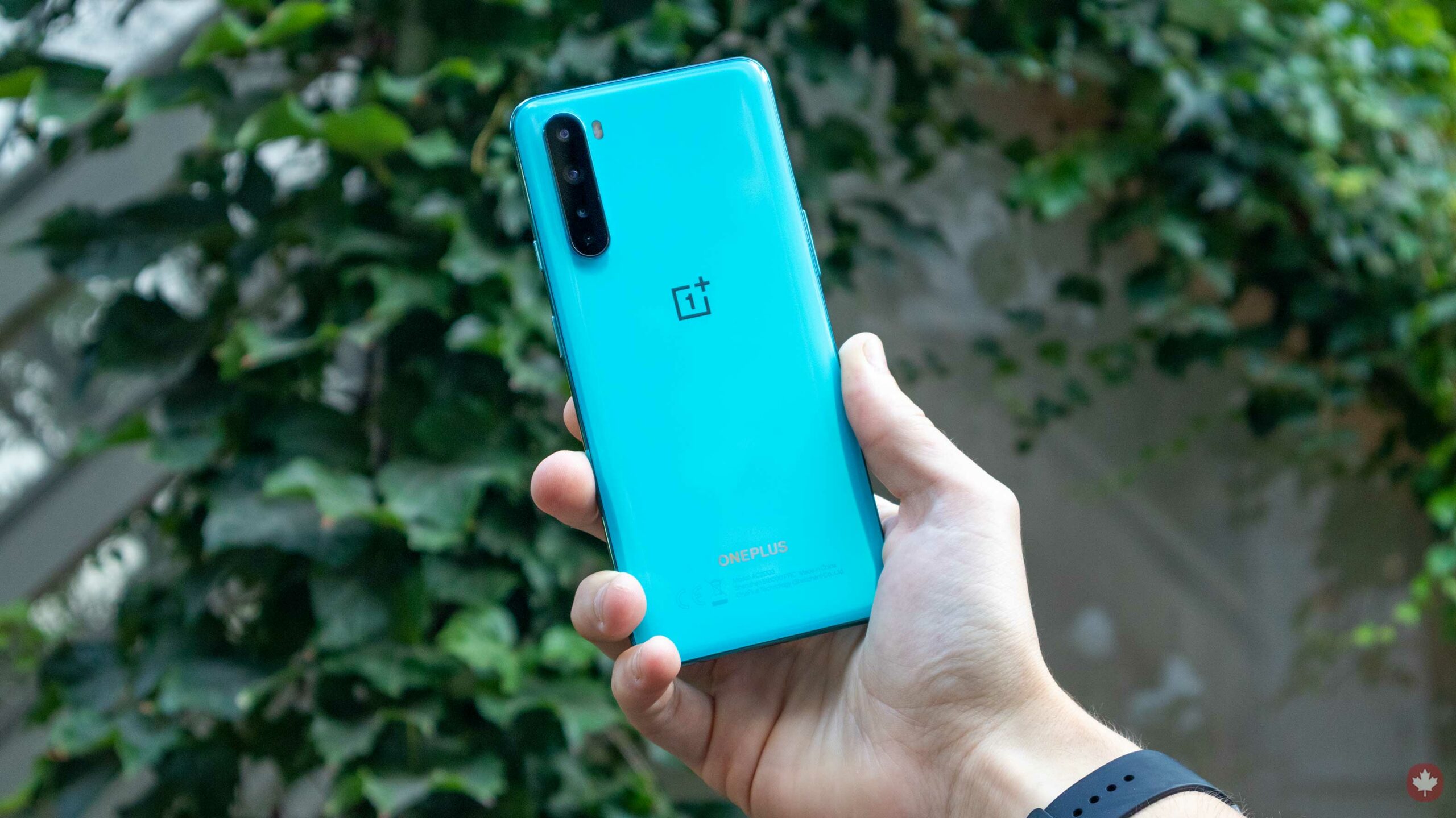 While flagships phones get us excited every year, it turns out that most people — even nerds like me — can be just as happy with an upper-mid-range device like the OnePlus Nord or Google’s Pixel 4a.

As a reviewer, I’ve always ranked value highly, so when companies like Google started releasing cheaper phones with decent specs last year, I was ecstatic. Then over the summer, as rumours circulated about another Pixel a-series phone and a mid-range OnePlus device, I began to get excited.

“Why are we paying so much for most smartphones?”

OnePlus, and Google to an extent, started their smartphone journeys with lower-cost devices that people could buy without having to enter into a carrier contract. My first Android phone was the Nexus 5, but there was a lot of debate between that and the OnePlus One when I bought it.

The first OnePlus smartphone was the original flagship killer; a phone that was able to compete with modern flagships but at a much cheaper price point.OnePlus likely took a loss on its first few phones to build its reputation, but it seemed to work since the company is still growing today.

Fast-forward to 2020 and OnePlus is in a weird spot. It’s doing well in certain regions of the world like India, but its recent 8-series smartphones didn’t seem to pay off in North America at least. The 8 series is notable for being the company’s first true flagships, but they’re held back in Canada by a moderately high price tag. Sure, they’re packed with high-end features, but the contrast between the Nord and the 8 Pro make those differences seem more gimmicky, rather than actually worth the $740 price difference.

When it comes down to my day-to-day usage, both phones act the same, and I can accomplish all that I need and then some.

With that in mind, why are we paying so much for most smartphones?

What does the Nord offer 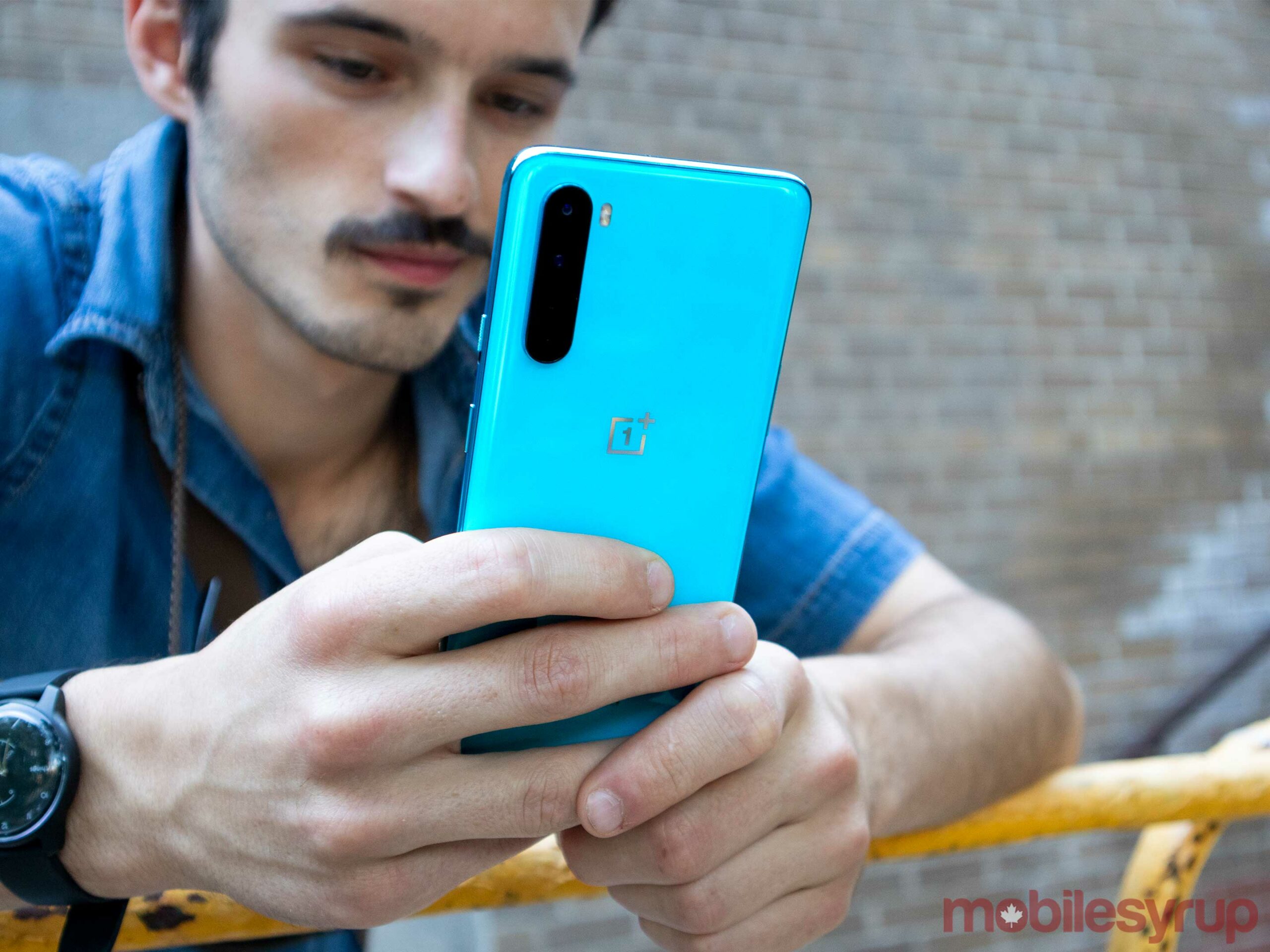 The worst thing about the Nord is that it’s not available in Canada. The phone is priced at roughly $660 CAD, which doesn’t make it as cheap as Google’s $475 Pixel 4a, but that higher price allows for a slightly more robust feature set.

On the front, it features a 6.44-inch screen that’s a little smaller than the 6.55-inch OnePlus 8, but I like how it fits in my hand more than most larger handsets.

This decently sized screen features a 2400 x 1080 resolution, but its pixel density is 408 pixels per inch, so there aren’t any issues with the display. It also has a 90Hz refresh rate that helps the phone feel smoother, but honestly, it’s one of the things I would have cut from this phone to make it cheaper. 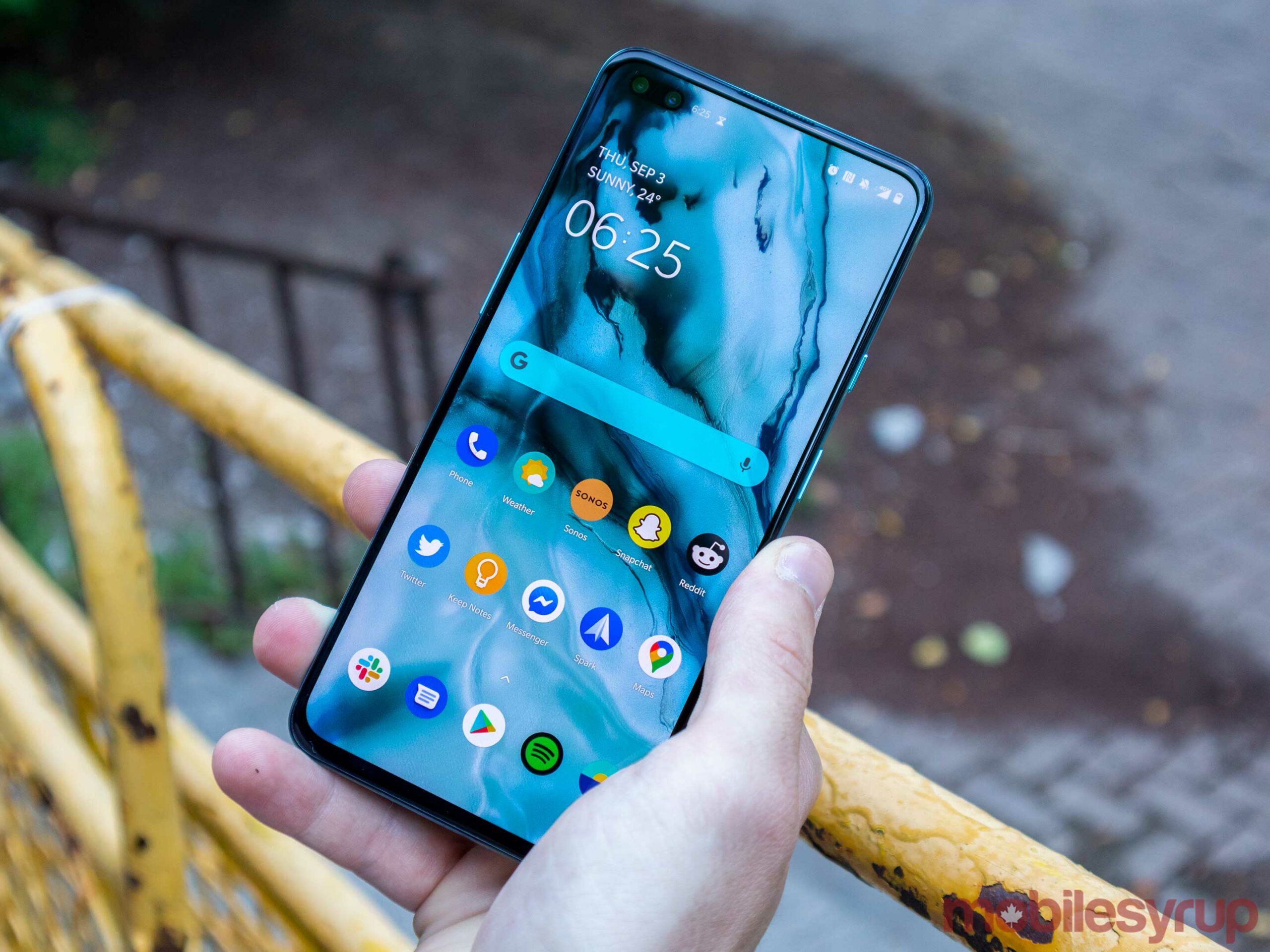 That’s sort of the story with this phone. OnePlus loaded it with decent specs and several random features like a macro lens, but there are a few things that most people don’t use or notice that the company could have removed to shave the price down even more.

A good example of this is the Nord’s extra selfie camera. There are two cameras punching through the top right-hand corner of the screen. One is a 32-megapixel camera and the other is an 8-megapixel ultra-wide. 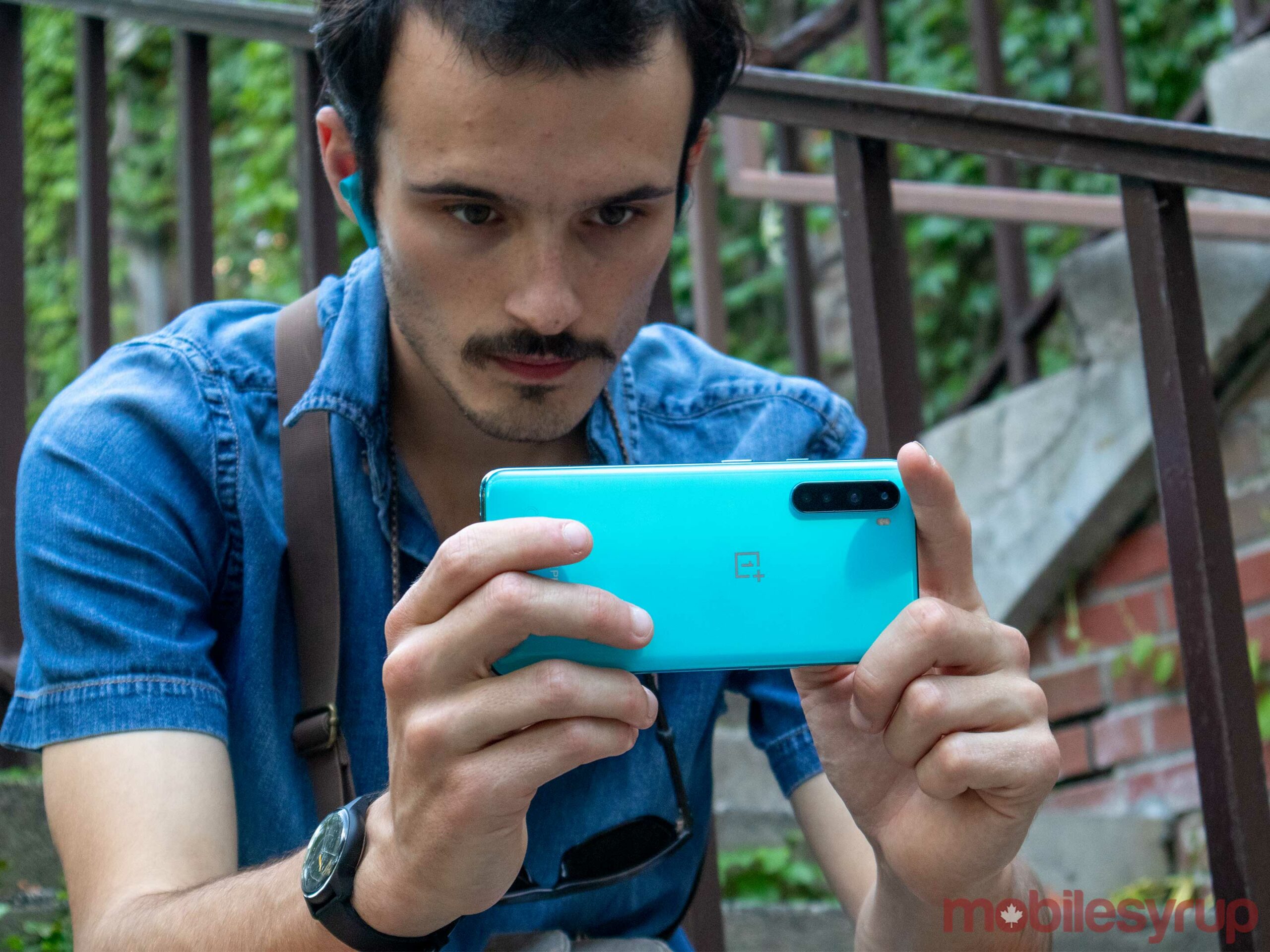 Both cameras are decent enough, and as much as the ultrawide is fun, it’s not necessary and could have helped OnePlus cut the cost down even more.

Inside the phone is Qualcomm’s Snapdragon 765G, an upper mid-range chipset first released back in December 2019. I won’t go too far into it here because there’s already an in-depth explainer on our site, but basically, this is the less powerful sibling of the flagship-level 865. It features a lot of the same genes, but it’s just not quite as fast.

In my time with the Nord, it was more than fast enough. Thanks to its 12GB of RAM, it’s easily able to play games without lag, and the OS runs smoothly. There isn’t much else to say here, but if you’re worried a mid-range chip can’t run a modern smartphone OS, I can tell you that it can.

Why are there so many cameras on this phone? 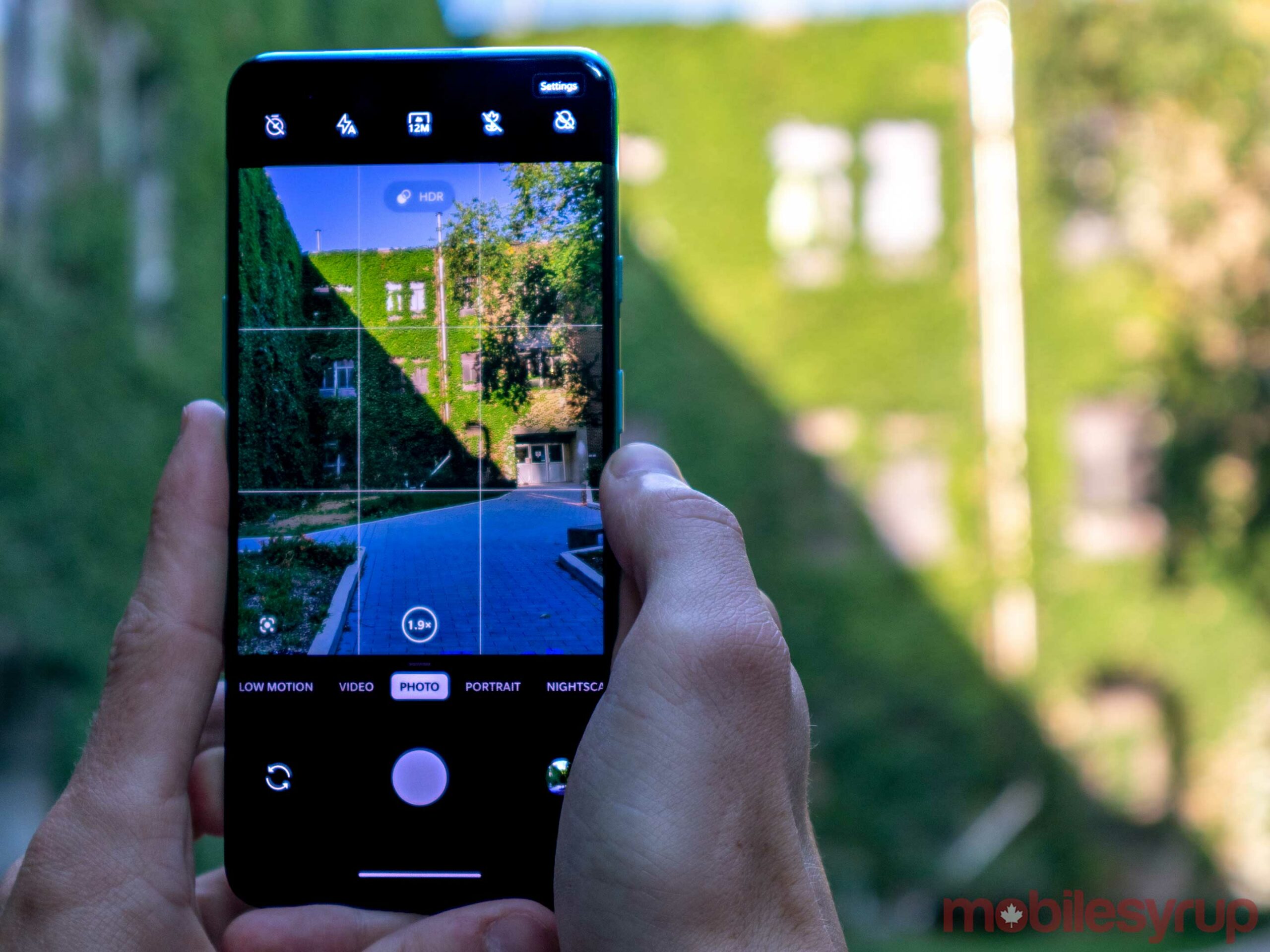 On the camera front, the Nord takes several cues from the OnePlus 8. It uses the same primary 48-megapixel camera sensor, and I was able to snap some awesome pictures with it. However, there does seem to be some post-processing going on, and I’m not as big of a fan of this camera as I am of the 7T’s. That said, it works well. It’s not iPhone or Pixel level, but it’s serviceable and as someone who likes taking pictures a lot, I don’t think it’s going to hold me back.

I found that some images are slightly desaturated when I blew them up on my PC, especially ones shot with the wide-angle lens. They look punchy on the phone, but once you transfer them to another screen, you can start to see a lack of colour. It’s easily fixable by boosting the saturation in post, but it’s annoying to see and happens on many mid-range phones.

One issue that I know OnePlus is trying to work on is its colour consistency between camera lenses. While it’s close this time, it still hasn’t matched all the cameras perfectly.

The only useless camera on this phone is the macro lens since it decimates the colours of whatever you’re trying to capture. It’s not enough to detract from the phone’s full experience, but man is it awful. 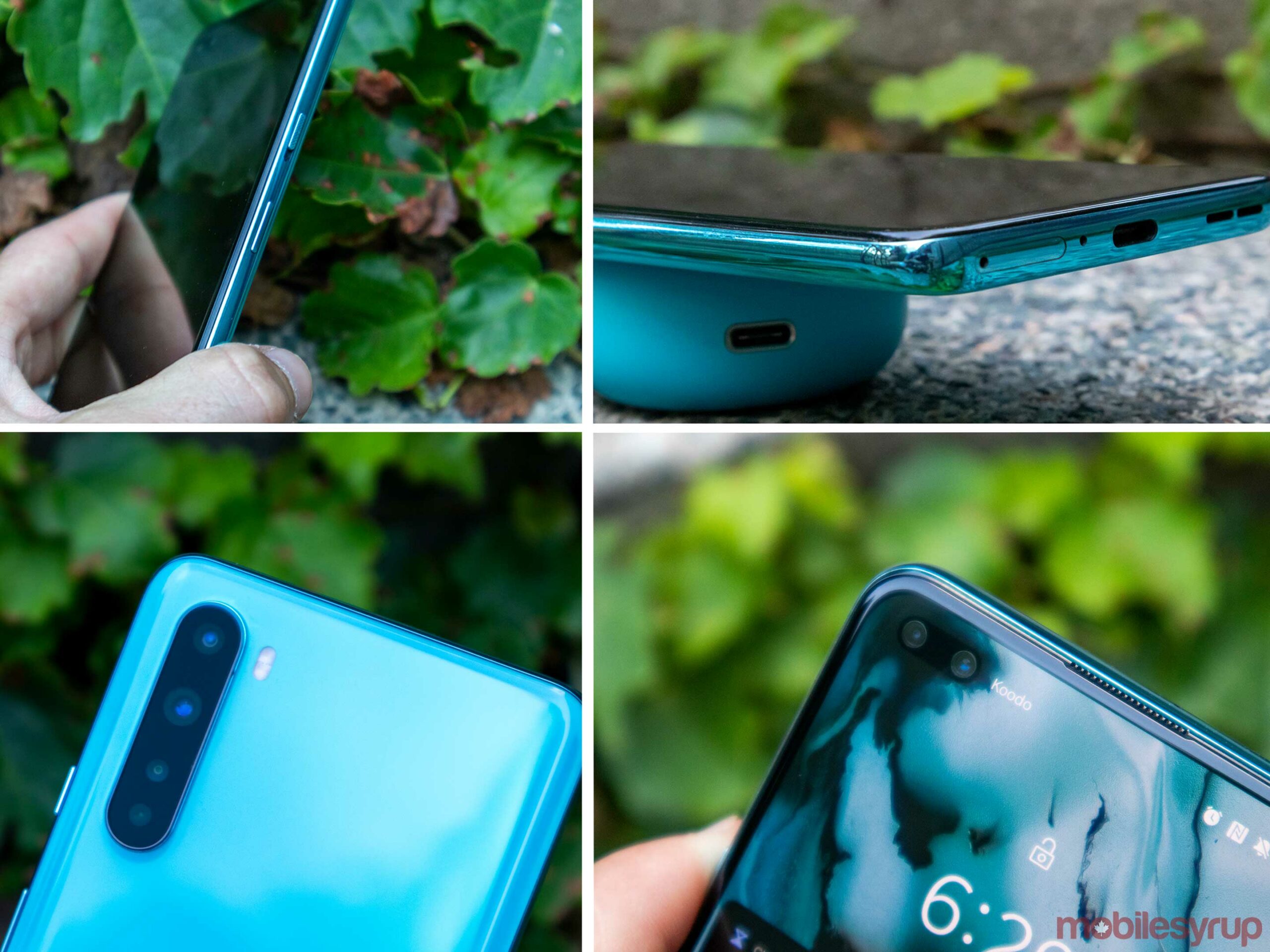 Finally, the hardware that encapsulates the whole phone is well designed and feels comfortable. The band that wraps around the phone’s edge is plastic with a glossy coating that makes it feel like metal, so I don’t have any notable issues here.

The front and back use Gorilla Glass 5, making them as tough as the OnePlus 8 series. I also liked that you can slap a case on this phone without bulking it up much, unlike the 8 Pro.

It’s worth mentioning that the Nord includes 5G capabilities, which likely raised the price a bit, but this is something that I’m undecided on if it’s needed or not. Sure it’s nice to be future-proofed, but at this point, we still don’t know how long it’s going to take before 5G becomes as widespread as LTE, particularly in Canada, so some people might have this phone and never even take advantage of the faster data speeds. 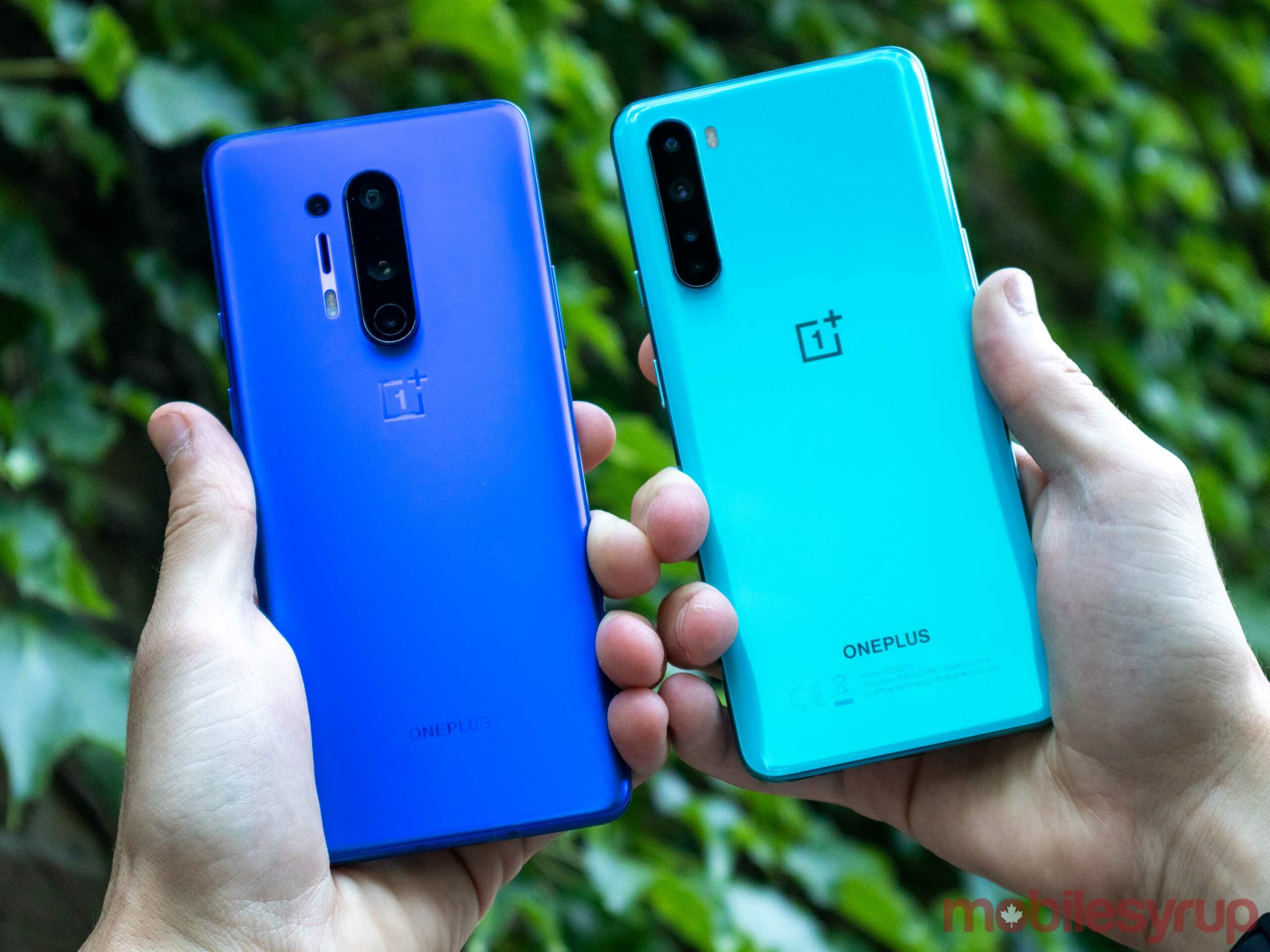 While I may have poked some holes in the wide-ish feature set of the OnePlus Nord, compared to the flagship 8 Pro, it’s still lacking quite a bit.

That said, the Nord is still a decently priced phone with a more common consumer set of features. And I think that the extra features that the 8 Pro offers compared to this phone don’t justify the expensive price difference.

This is a list of features that the OnePlus 8 Pro has and the Nord does not:

Overall the 8 Pro is a better phone, there’s no denying it, but it’s not worth the $740 difference between these two devices. 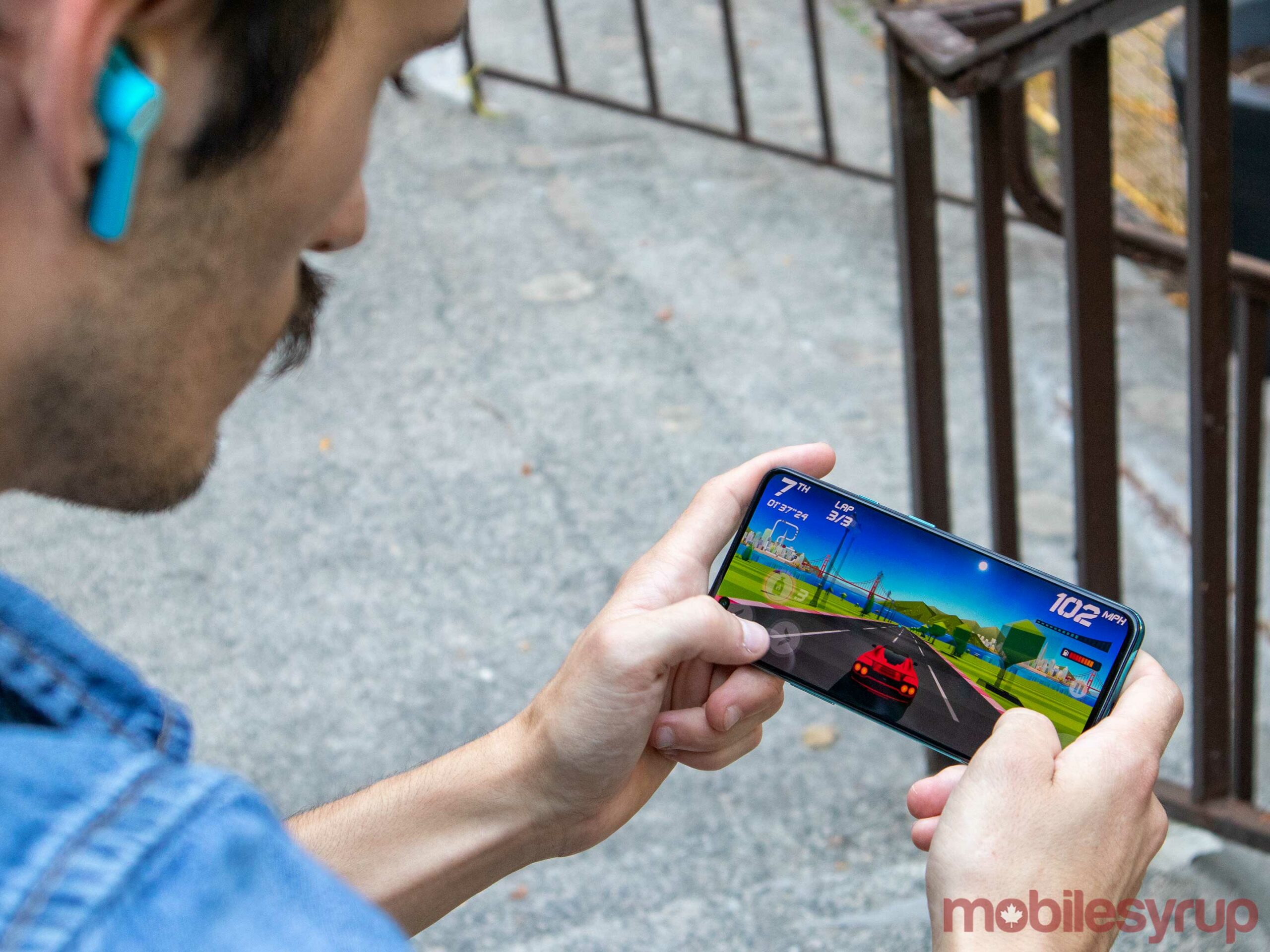 While the features listed above might be cool and convenient, are they really worth that much money? I think the only feature from that list I miss is the waterproof rating –everything else I couldn’t care less about. Sure, wireless charging is nice, but I can easily live without it to save some money.

Dolby Atmos speakers are cool, and the Nord’s single bottom-facing speaker can easily be covered by your hand when you’re watching videos, but when you put the two phones side-by-side, the 8 Pro only slightly outperforms the Nord.

Phones for the people 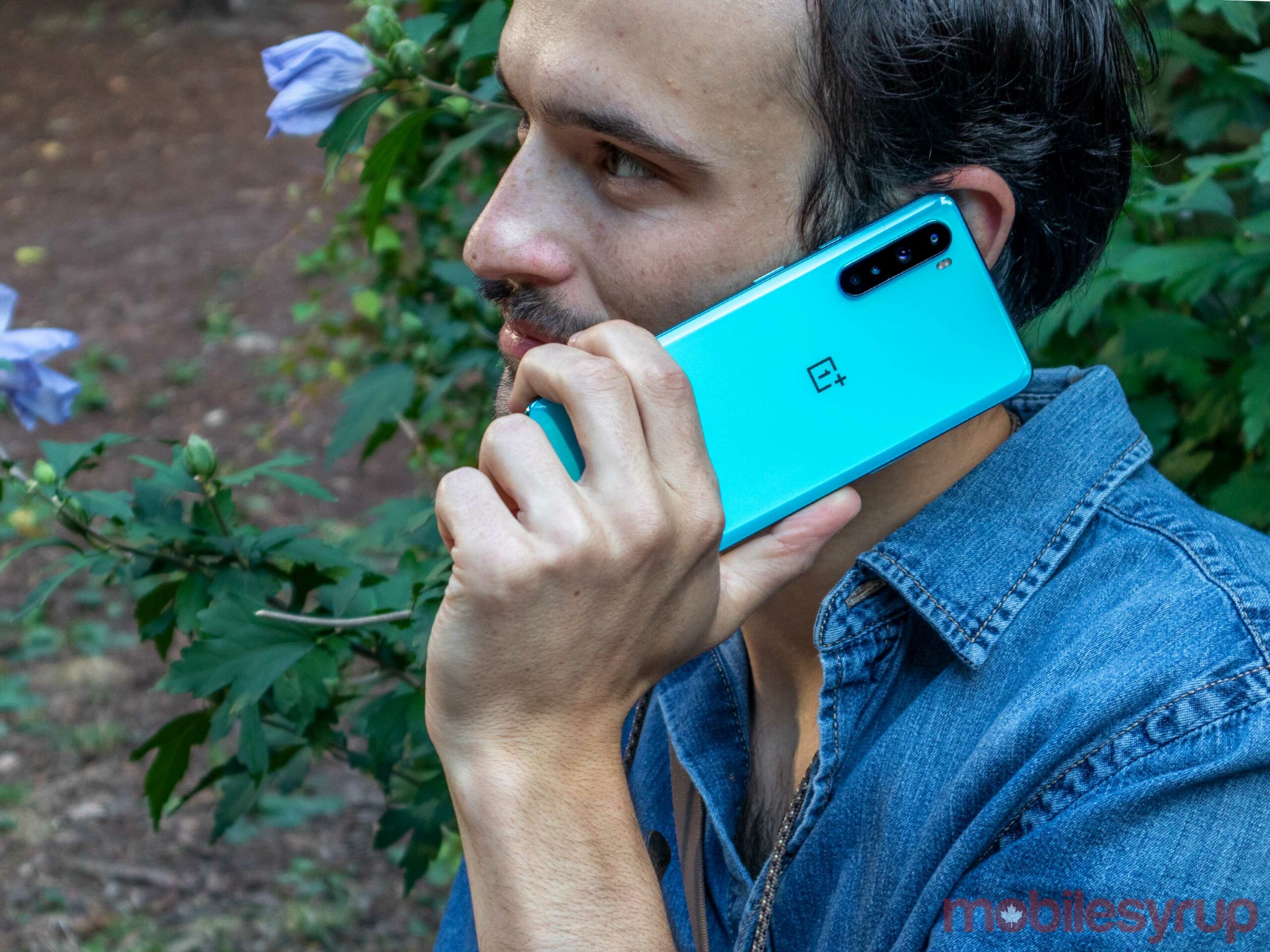 The flagship is better, but is it better enough to justify the price? In the case of the Nord and the 8 Pro, it isn’t.

The telecom industry and smartphone manufacturers have conditioned us over the years to believe that phones need to be so expensive that people need to finance them over two years.

Hopefully, in 2020 the time for that is over as more mid-range phones like the iPhone SE, Pixel 4a and Nord capture headlines while proving that $1,000 is simply too much for most phones.

MobileSyrup writer Dean Daley has a theory that the smartphone market is on the verge of being defined as — low-end, mid-range, upper mid-range, flagship and ultra flagship levels.

While shifting focus from regular phones to exciting ultra-flagships like the Fold 2 or the Surface Duo might help companies push expensive phones, I hope at the same time, manufacturers continue to offer stellar mid-range devices like the Nord now that the chipsets for them are powerful enough for almost all consumers.

OnePlus isn’t releasing this Nord in Canada, but it’s hinted at another version that’s going to come to our shores at some point soon. If it’s nearly as good and a little bit cheaper, I think it’s going to be a perfect phone for Canadians this fall.