Acer Predator 21X: Beast of a machine that shouldn’t exist, but does

It’s like using a flamethrower to light a birthday candle 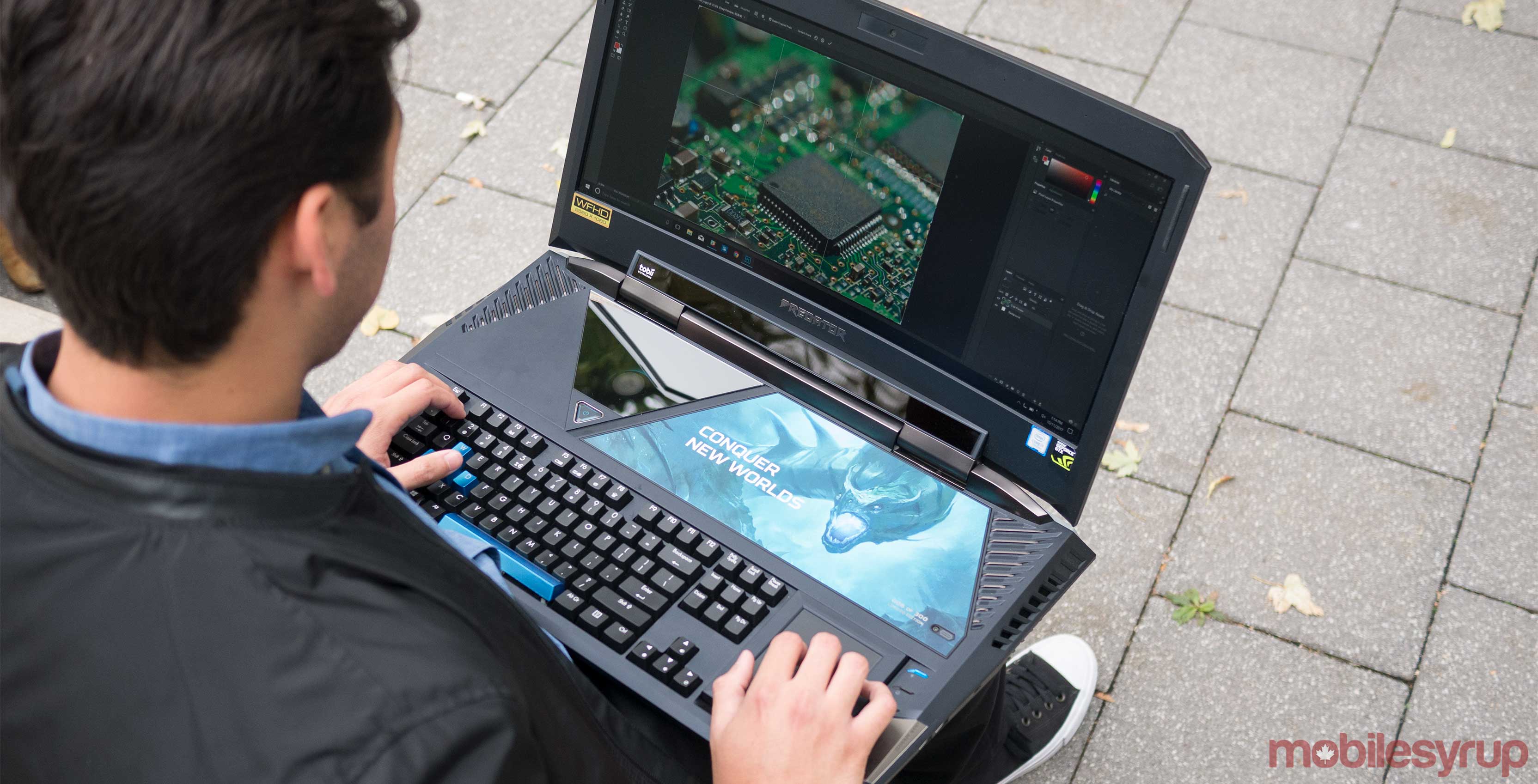 From time to time, we here at MobileSyrup like to write about technology that falls within our mandate of “mobile tech,” but that is nonetheless undeniably, comically, radically outside of that purview.

Acer’s Predator 21X — a laptop with a 21-inch curved screen and a full-sized mechanical keyboard — is one of those products that’s technically mobile, but only if you grossly exaggerate the definition of the term. It is larger than almost any other laptop on the market, ludicrously overpowered, and one of my favourite pieces of technology that I’ve ever had the pleasure — and misfortune — of getting to use.

At the MobileSyrup office, we’ve taken to affectionately referring to the computer as ‘The Beast.’

Don’t ask why — that’s not the point 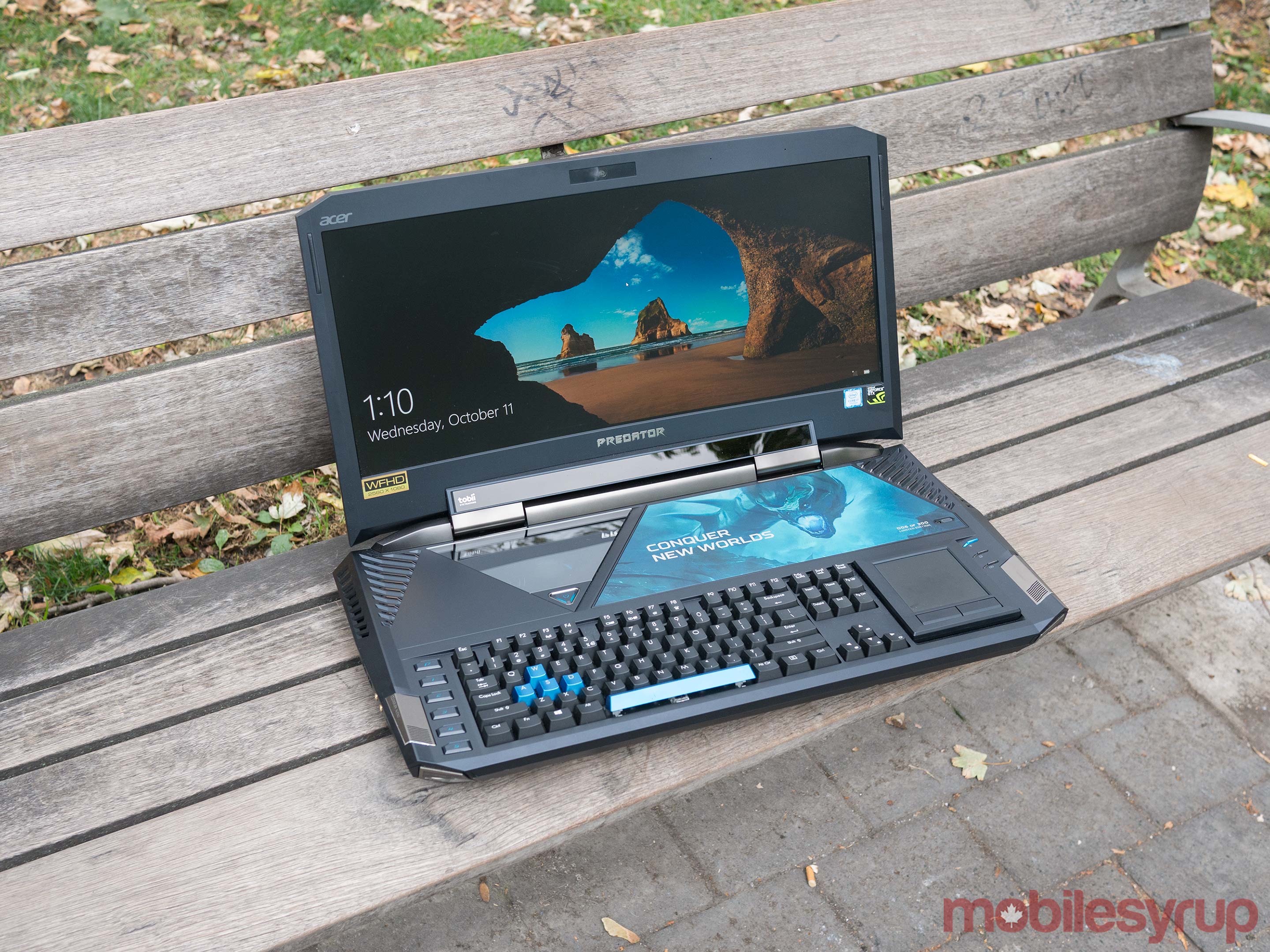 Before we continue, I feel it imperative to get some simple accounting out of the way.

If you don’t think you can get enough juice out of the Predator 21X, don’t worry, you can overclock it. Acer’s PredatorSense software gives you complete control over the computer’s CPU and GPU — as well as the computer’s fans and the backlit keyboard’s colours and patterns.

The Predator 21X has ports on the back and both sides. You’ll find an HDMI port, two Display ports, a Thunderbolt 3 port, as well as an Ethernet port on the back. There are two USB 3.0 ports on the right side, with two more USB 3.0 ports, an SD card reader, a headphone jack and a mic jack on the left side. 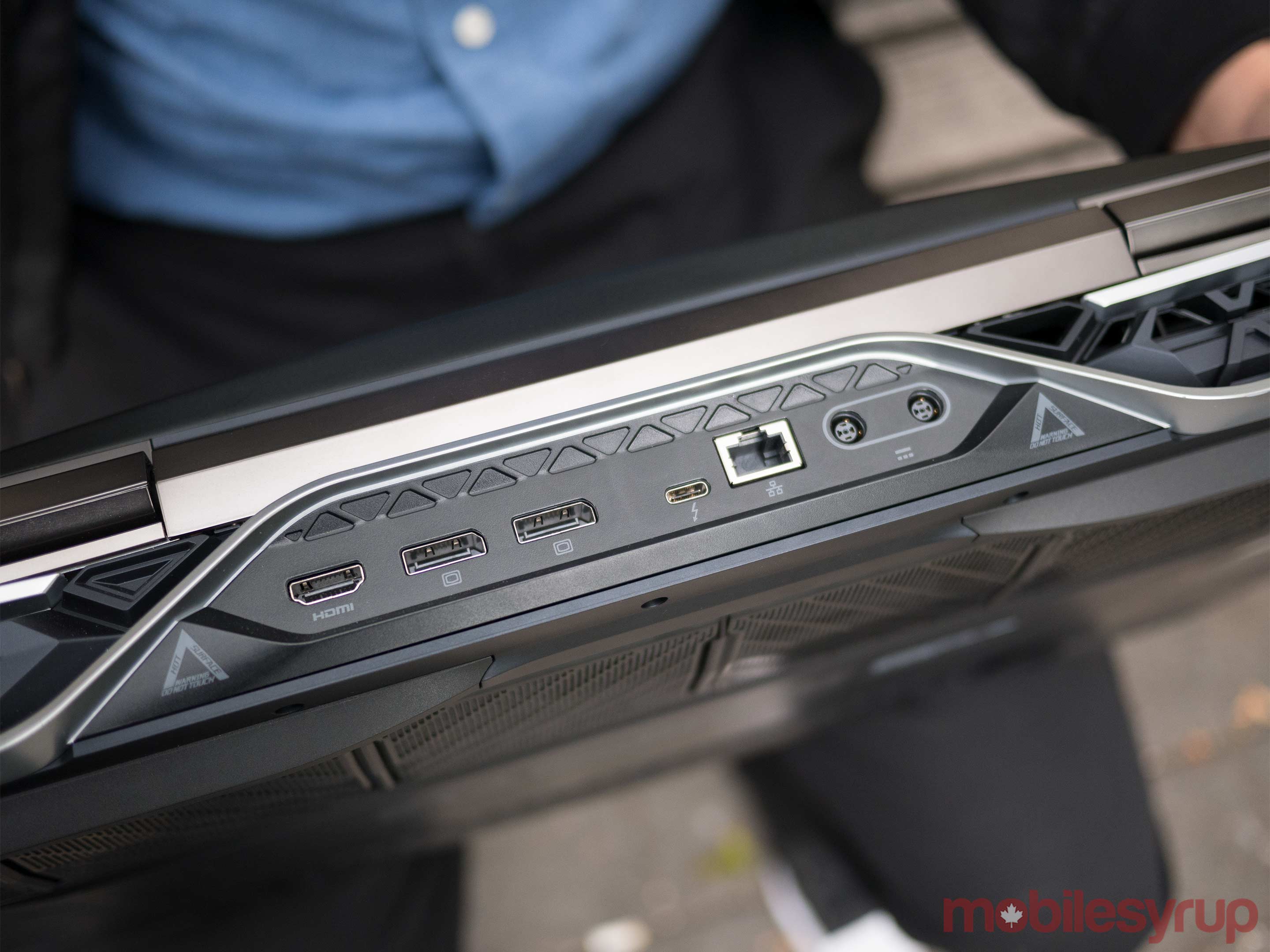 In case you were wondering, the laptop runs Windows 10 out of the box, but you can obviously install Linux if you so choose. 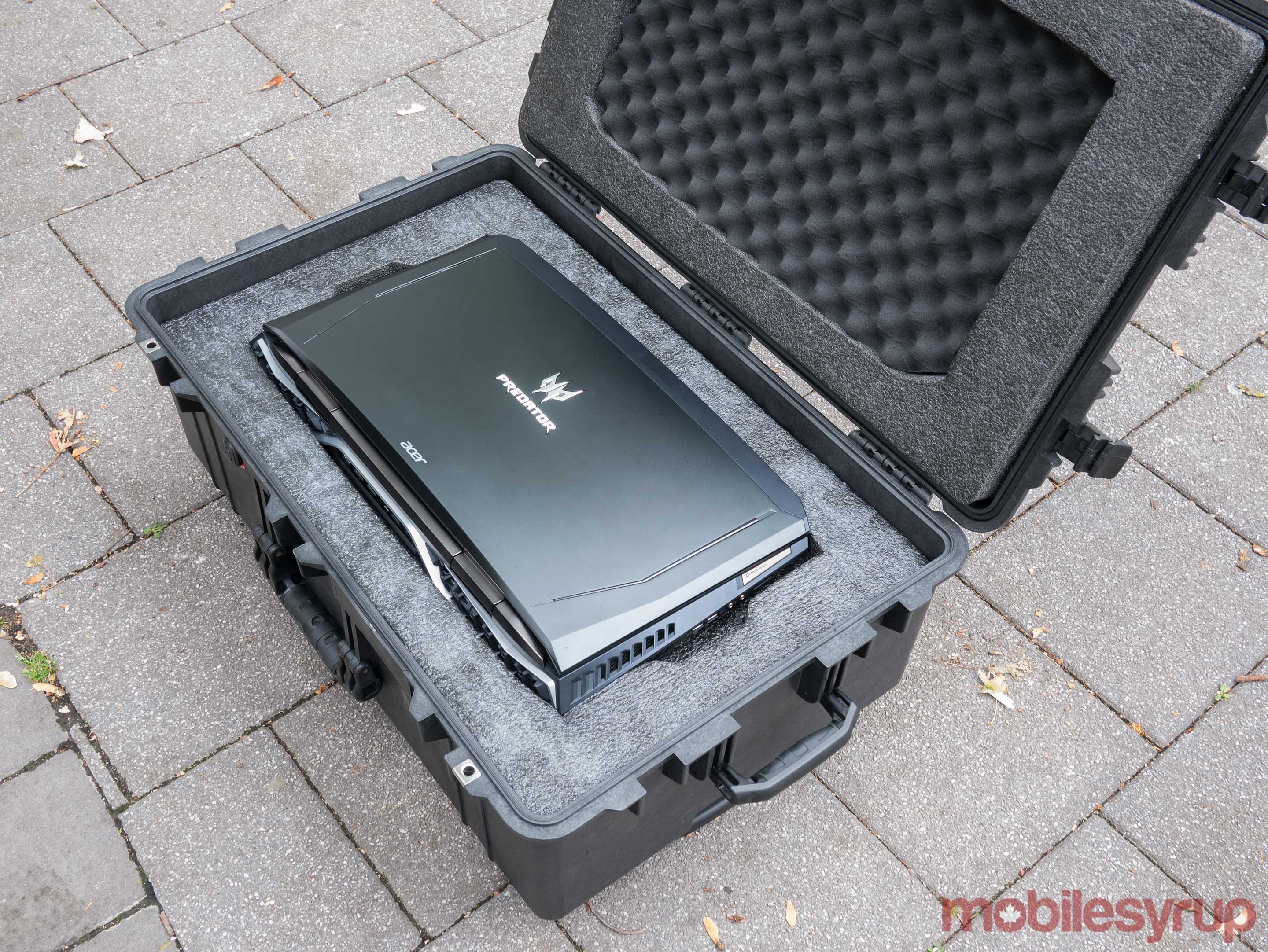 If you think this particular computer is unnecessary and that no one on Earth — not even the most quality-obsessed PC Gamers — needs to build a rig as powerful as the Beast, you’re positively, absolutely, one-hundred-percent correct.

But that’s not really the point, is it? This is a machine with more raw computing power than any one single ‘Average’ person might ever need. Visual artists, musicians, film editors, television directors, computer scientists — these are all people who might conceivably call upon the powers that be to tap into the Predator 21X’s maximum potential, and even they would be better served with a cheaper custom rig, or something legitimately portable like, oh I don’t know, a fully loaded MacBook Pro.

This is a machine, hilariously enough, that is powered by two charging bricks. 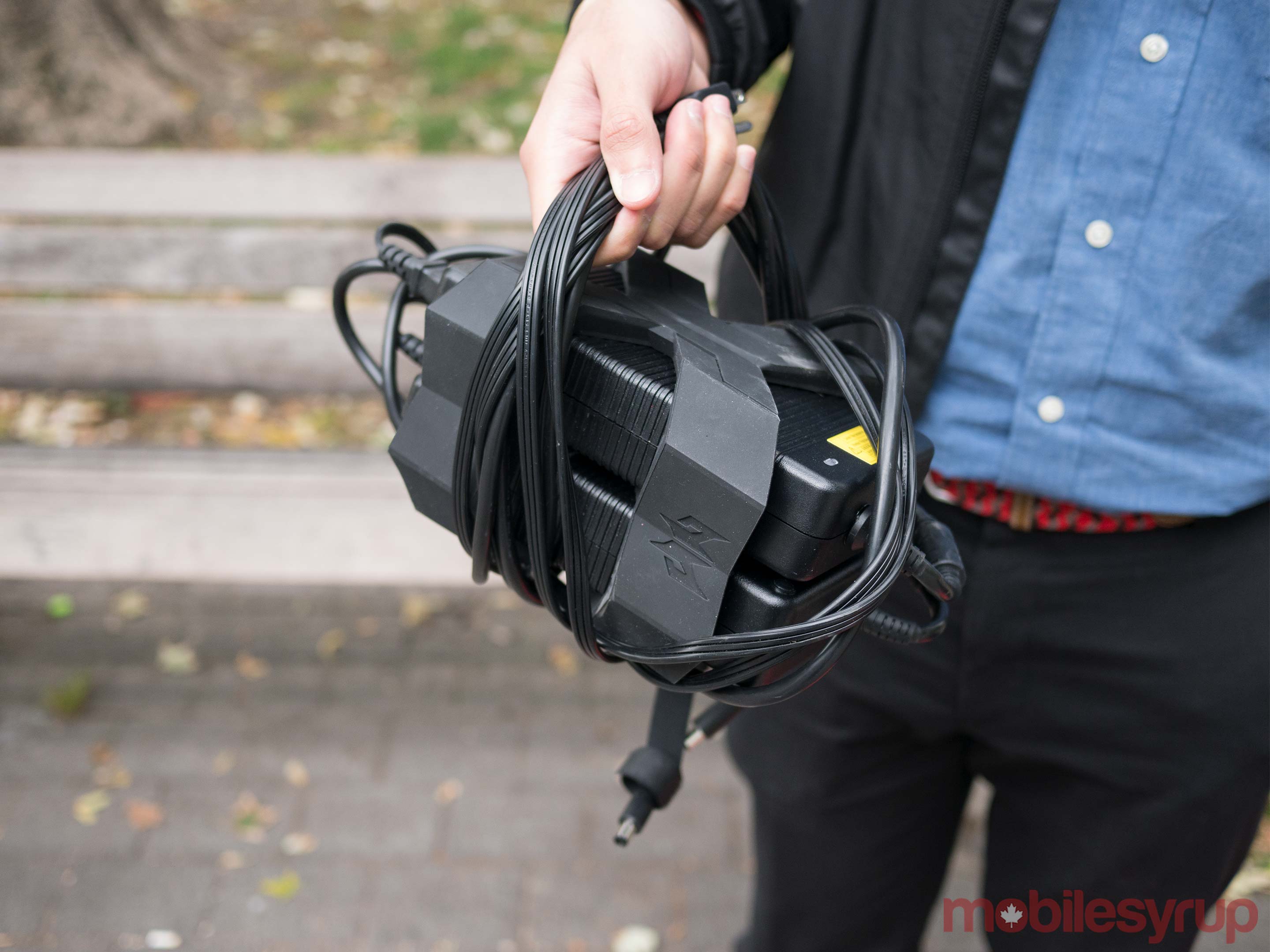 This is a machine that ships in a military-grade Pelican case that is not only water-resistant and drop-resistant, it’s also crush-resistant — whatever that means. Arms dealers ship weapons to warlords in cases less sturdy than the luggage that Acer used to send this computer to the MobileSyrup offices.

To turn up one’s nose and sneer at the Predator 21X, to say that there are cheaper options for those looking to build a gaming rig — to even remotely suggest the possibility that it is a logical purchase — is to completely miss the point.

This isn’t a device that’s meant for the average person. It’s also not a device for the below or above-average person. The Predator 21X is a proof-of-concept. It’s evidence of all of the advances in computing technology that the human race has made since Augusta Ada King-Noel — Countess of Lovelace — thought to find out if it would actually be possible for the human species to build a machine capable of performing algebra with minimal input from a biological, thinking operator.

Once you pick your jaw up from the floor, you can really get some work done 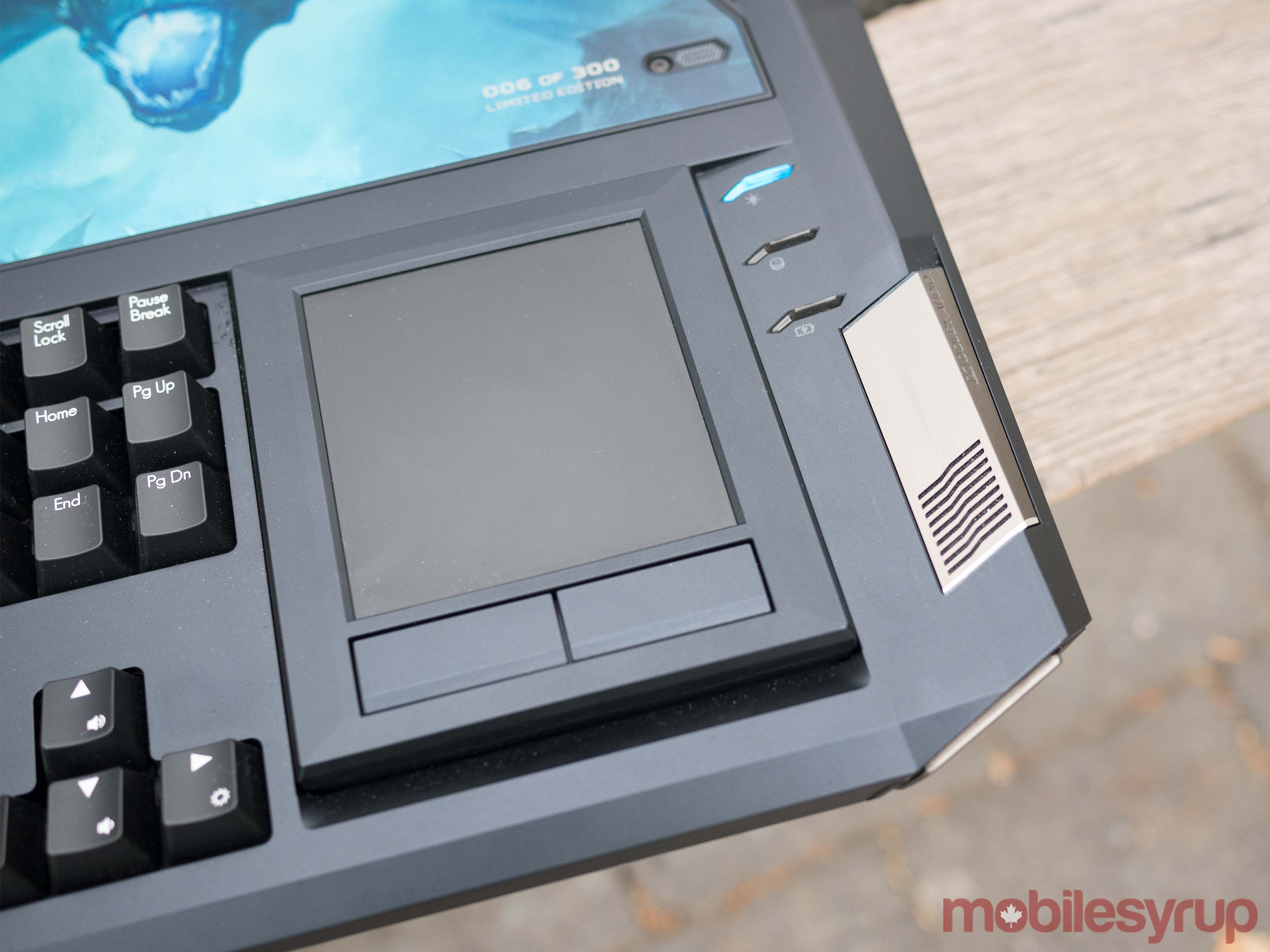 My daily driver is a 13-inch, base model 2015 MacBook Air. It’s got 128GB of SSD storage, 4GB of RAM, and runs on a fifth-generation Broadwell Intel Core i5 processor. There are specs that are important to other people, but what matters to me is that it takes my MacBook Air about one minute to one-minute-and-a-half to get from completely off to completely ready for the day. I can prepare a steeped cup of tea in the time I have to wait for my MacBook Air to get ready, and that’s completely alright in my books.

Thing is, I can maybe tie my shoelaces in the time it takes the Beast to get ready. It’s honestly a little scary.

There was once a time, not too long ago, that the internet was faster than the web browsers that ran on our computers. Webpages would load — speedily or otherwise — but our computers simply weren’t fast enough to compete. Our speakers told us that the audio drivers had rendered whatever Shockwave audio was playing on a particular website, our video cards would be lagging behind, and we’d try to click away or close our browsers to calm our aching ears, but it would be to no avail. Our computers simply weren’t fast enough to process the requisite number of equations to just close the blasted browser. 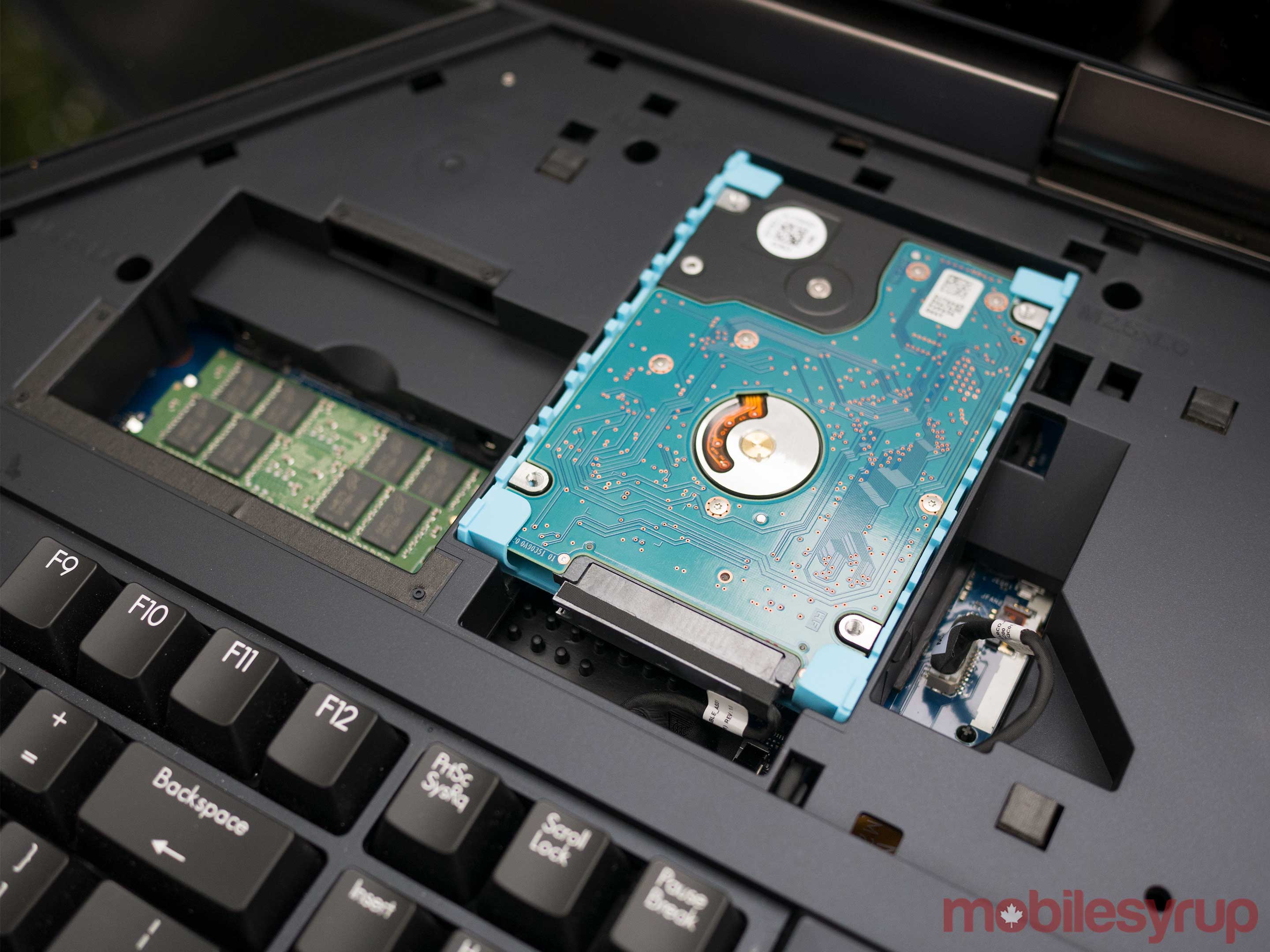 Today, for those lucky enough to live in a place with so-called fast internet, our computers have finally caught up to the miracles of the internet. In fact an incredibly lucky few are able to compute processes faster than the internet can load webpages.

Having used the Predator 21X, I now count myself as one of those lucky few, because there’s almost no internet that’s fast enough for the Beast. It’s always ready and it’s always waiting.

Allow me to elaborate. I perform a very specific morning ritual when I get to the office. I simultaneously load 39 separate Chrome windows filled with the news I feel that I need to read in order to be satisfied with my understanding of the universe. It’s how I get ready for the day ahead, and it’s how I stay up-to-date on all the news that’s fit to print. My MacBook Air dutifully loads these webpages, and, of course, I have to wait for them to load. I can’t do anything else while they load, because my computer simply can’t handle it.

The Beast, in comparison, loads everything in a matter of seconds. I can launch Photoshop and Steam’s Big Picture mode while I wait. I can launch the Blizzard app and Davinci Resolve. I can do these things, not because I plan on using them right away, but simply because I can — simply because I have to use my imagination to push the Predator 21X to its limits.

Of course, when it comes time to actually get some work done, the Beast is, like I said earlier, singlehandedly the most powerful computer I’ve ever had the pleasure and honour of using. 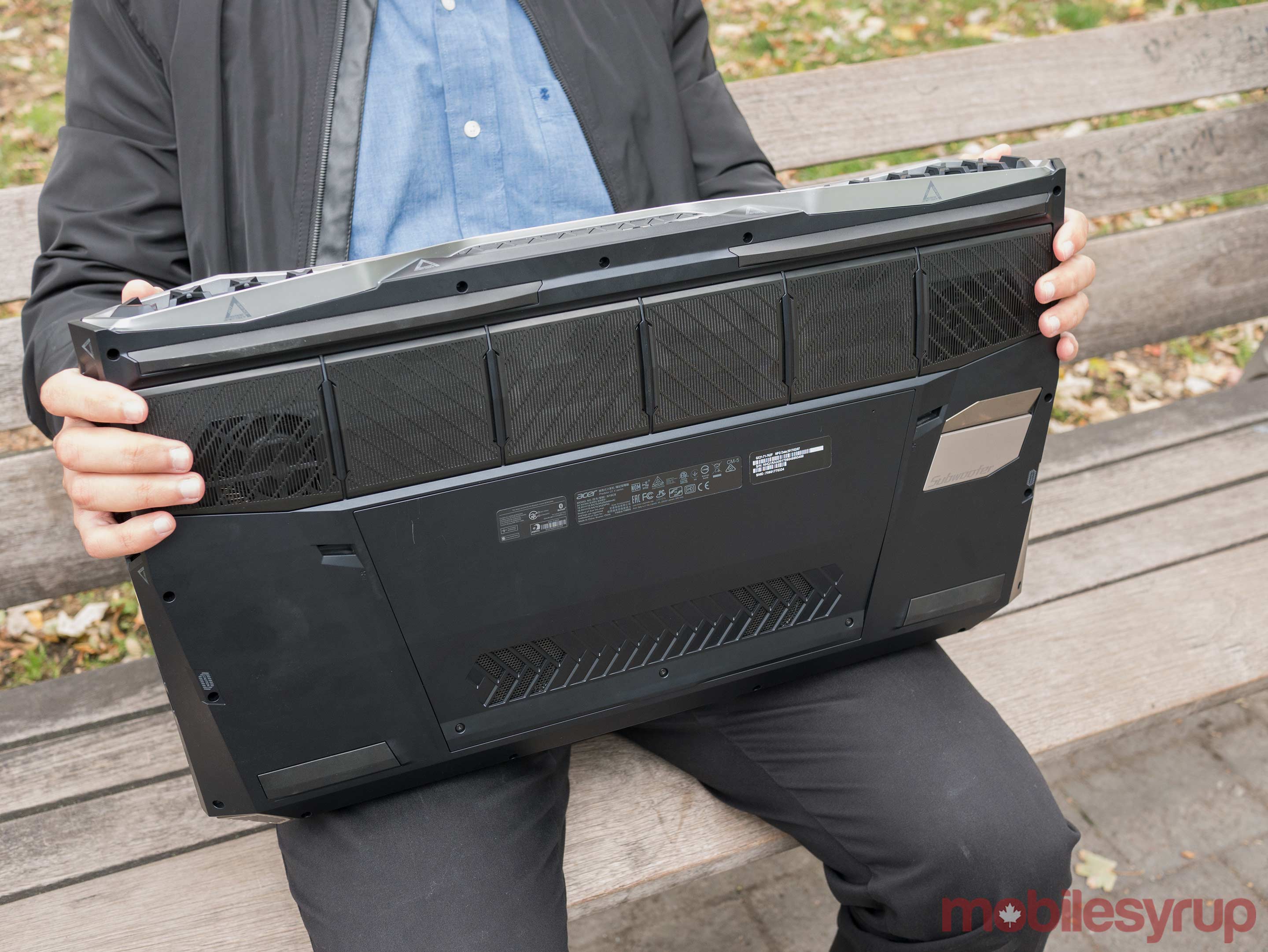 There’s really nothing I can criticize about the Predator 21X’s performance. It can do almost anything you throw at it and it ran almost every game at max settings.

Did it stutter and falter while trying to perform some particularly taxing processes? Of course it did, it’s a machine made of metal and silicon. But it still got the job done better than any other machine I’ve ever used.

Did its battery only last a few hours because of the sheer enormity and scope of the machinery that was assembled to build this behemoth? Of course, but you wouldn’t use this computer to get work done on-the-go in the first place.

Did it dip below that vaunted 60 frames-per-second standard that all PC gamers hold dear? Of course it did. But it still ran every game I played better than any other computer I’ve ever used. 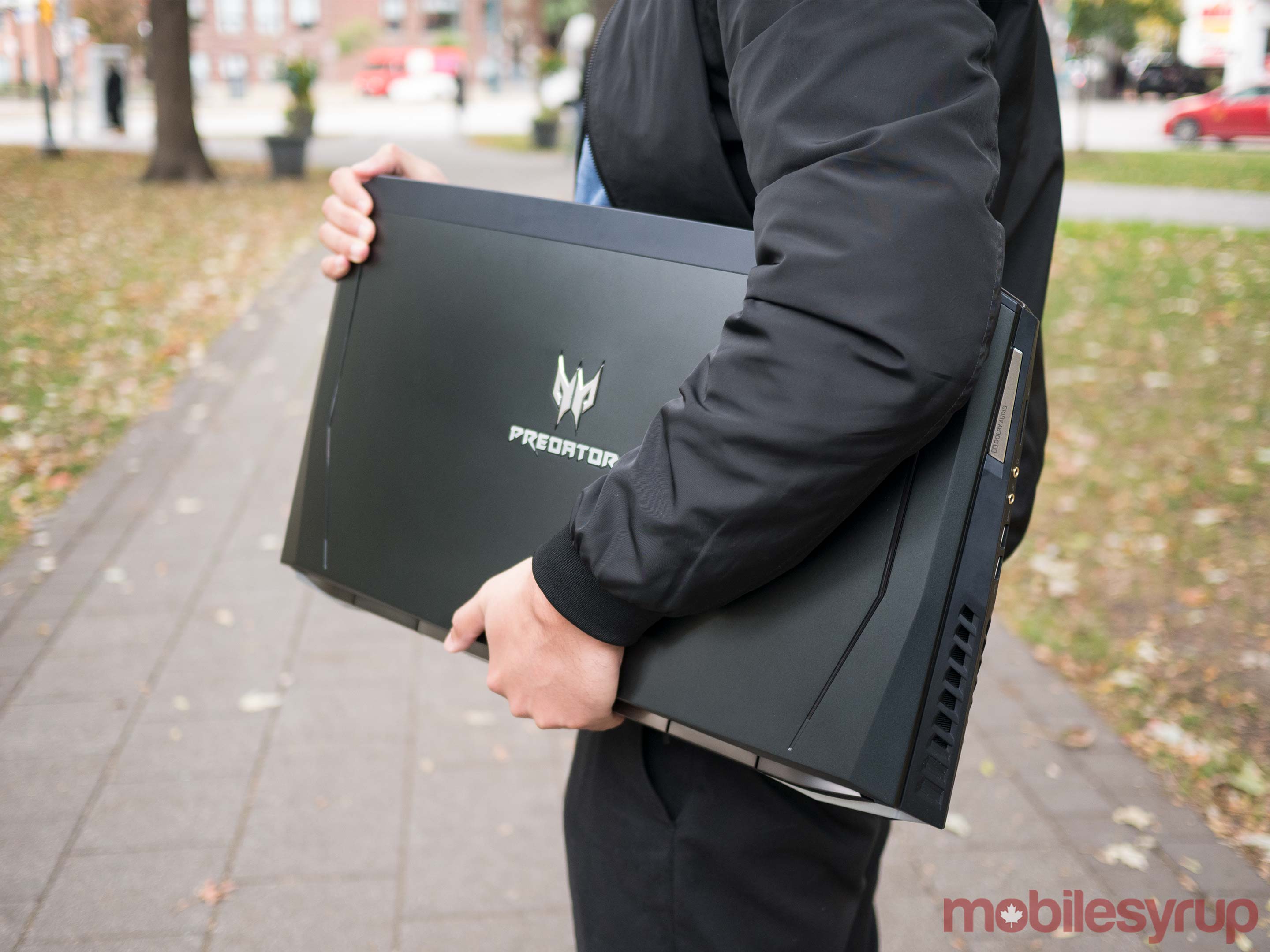 For the intents and purposes of delivering a comprehensive and detailed story, I used the Predator 21X on my lap for 10 minutes. You might be thinking to yourself, “That doesn’t seem like a lot of time,” and you’d be right. Still, my legs went numb and my knees hurt for the rest of the day, so I leave it to you to decide whether or not to run an extended gaming session with an 8.5 kilogram computer on your lap.

I also wouldn’t recommend carrying the Predator 21X for any extended period of time. As you can imagine, it’s quite heavy. That being said, the Beast can also be uncomfortable if used on a desk without certain additional pieces of hardware. You see, as a result of the sheer amount of technology packed into the laptop — as well as the fact that it features a full-size mechanical keyboard — the device’s user input hardware is actually rather tall, in comparison to smaller laptops.

However, Acer does include a hand rest that magnetically attaches to the Predator 21X, and this certainly improves the laptop’s usability.

If I have any complaints about this laptop — and truth be told, I have few complaints — it’s that the device’s touchpad is decidedly subpar when compared to the rest of the computer’s build. It’s a Windows Precision Touchpad with two physical buttons for right- and left-clicking.

The buttons are mushy and the touchpad is dissatisfactory, and I highly recommend investing in a hardware mouse. Additionally, if you find the touchpad utterly repulsive, fret not. It’s magnetic and removable. Flipping it over reveals a numerical keypad. 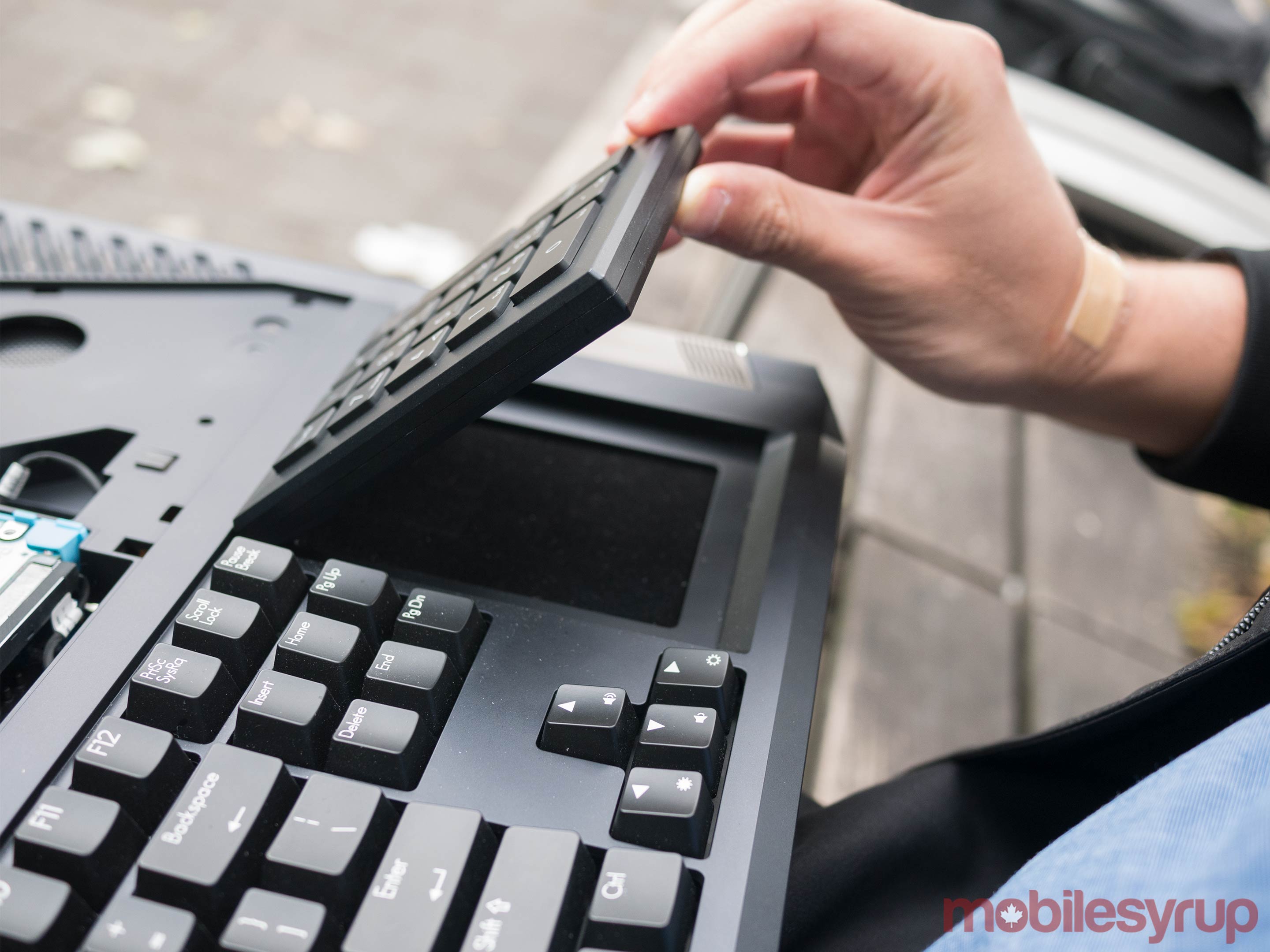 On a final usability note, the Predator 21X also comes with Tobii EyeX eye-tracking. It works well enough, but I found that I disabled it after the novelty wore off.

I’m sure others could get more use out of eye-tracking software, but I’ve found that I’m not the kind of person who prefers eye-tracking over simply controlling an in-game camera — or my mouse cursor — with physical hardware inputs. Ultimately, it comes down to a matter of precision, and as of right now, a hardware controller or a hardware mouse is more precise than eye-tracking software.

Some final thoughts on the wonders the human species has witnessed

Some people joke that even the cheapest, lowest-end smartphone is still magnitudes of times more powerful than the machines used to coordinate the Apollo 11 mission to the moon. Imagine what NASA could have done with just five Predator 21X computers.

All of which is to say that the Predator 21X is not overpowered. It is, however, quite possibly the most powerful consumer-grade computer in the world, and if you ever have the opportunity to use it, I highly recommend trying to get it to slow down by utilizing the basic software that people use on a daily basis. When the machines finally take over, I sincerely hope The Beast and its siblings are on our side.