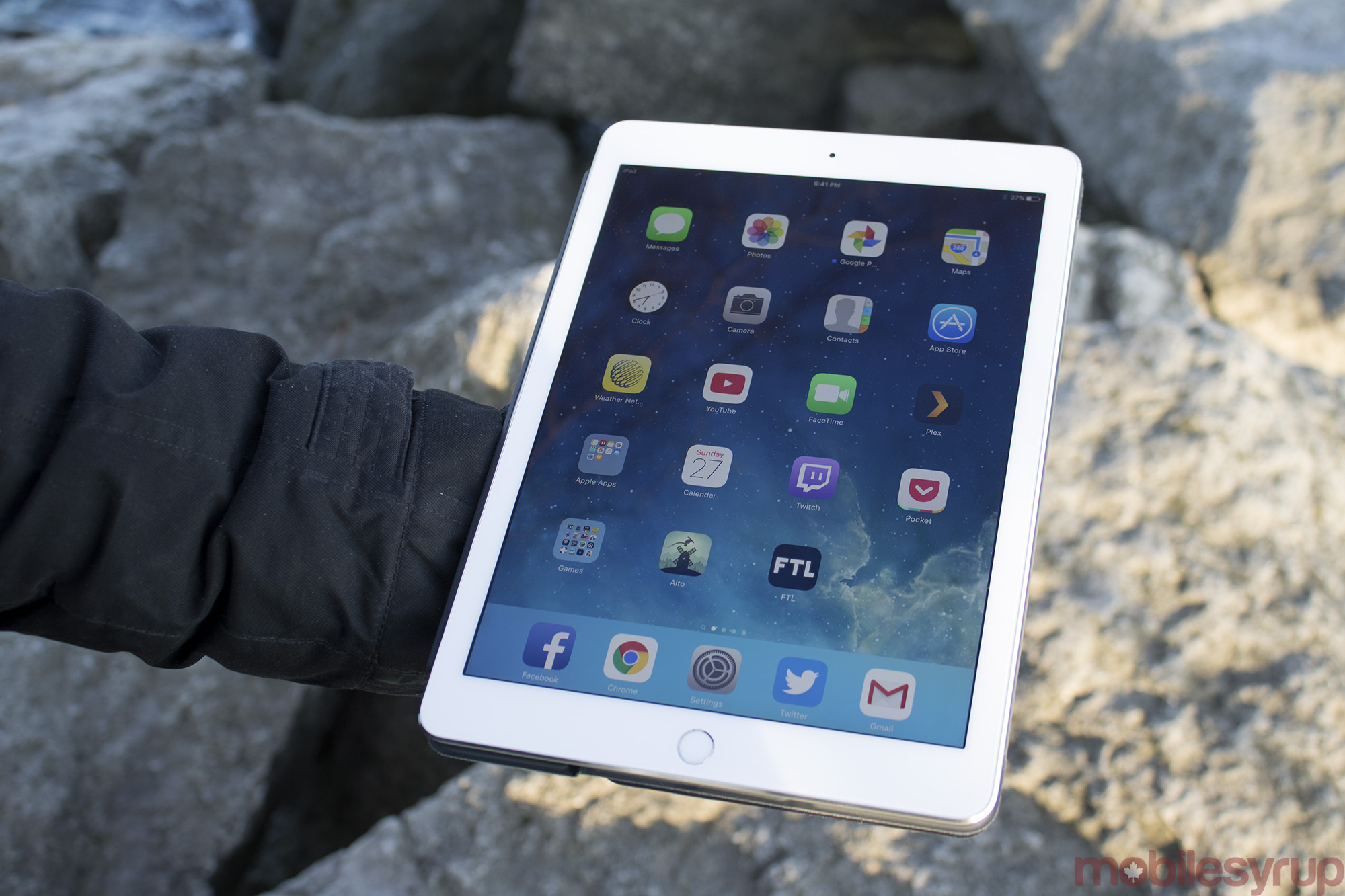 The same question surrounding the 12.9-inch iPad’s release last year, clouds the 9.7-inch iPad: who is it really for?

If only the 9.7-inch iPad Pro was capable of dual-booting iOS and OS X, then it would likely be one of the best laptop/tablet hybrid devices available, but unfortunately this is not the case with Apple’s latest tablet.

Make no mistake, even in this smaller, more manageable form factor, the 9.7-inch iPad Pro is not a worthy laptop replacement. What the tablet is though, is a capable upgrade to the aging iPad Air 2, as well as a decent enterprise device, depending on what tasks you need to accomplish. 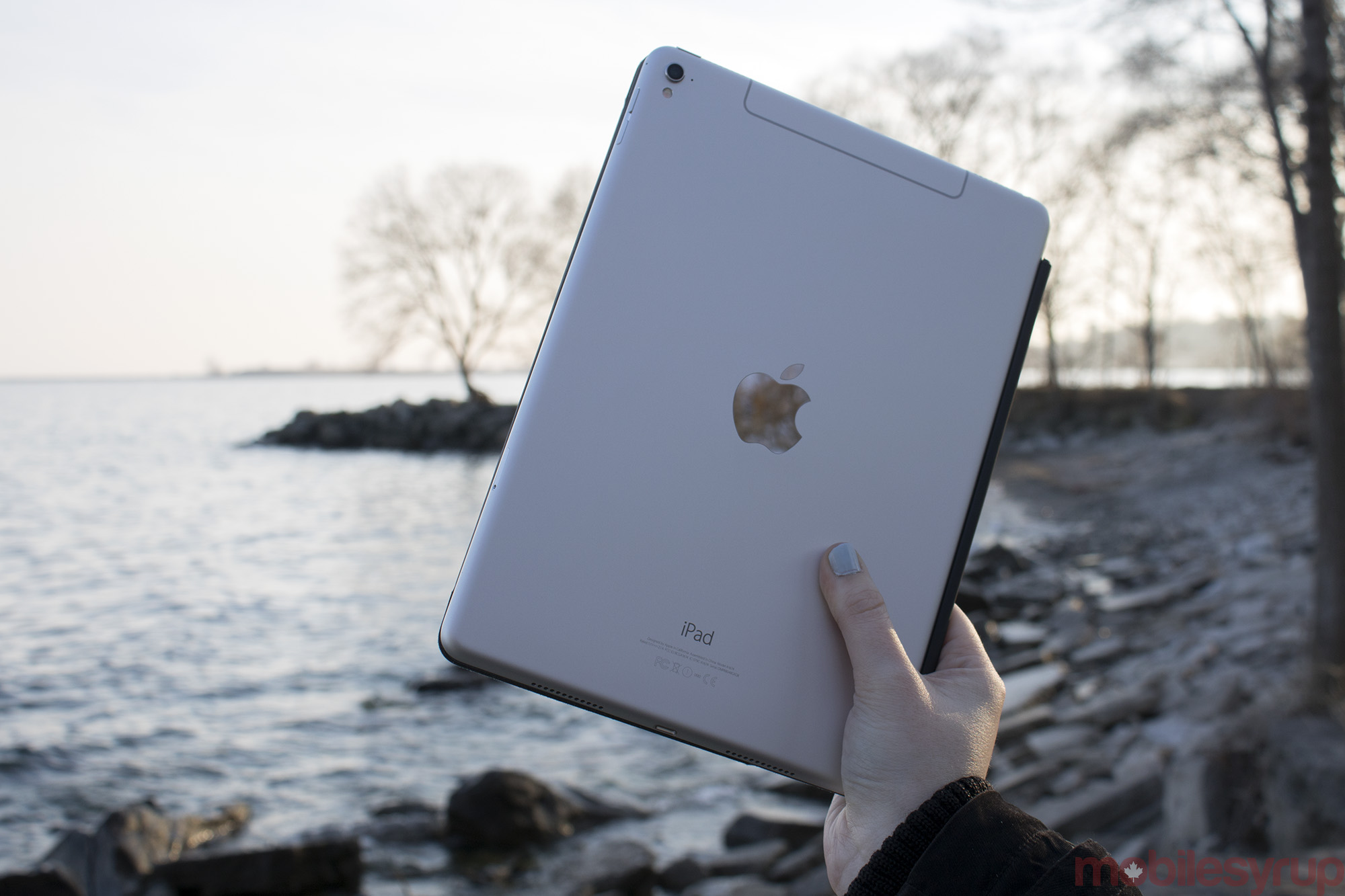 Probably not a laptop replacement 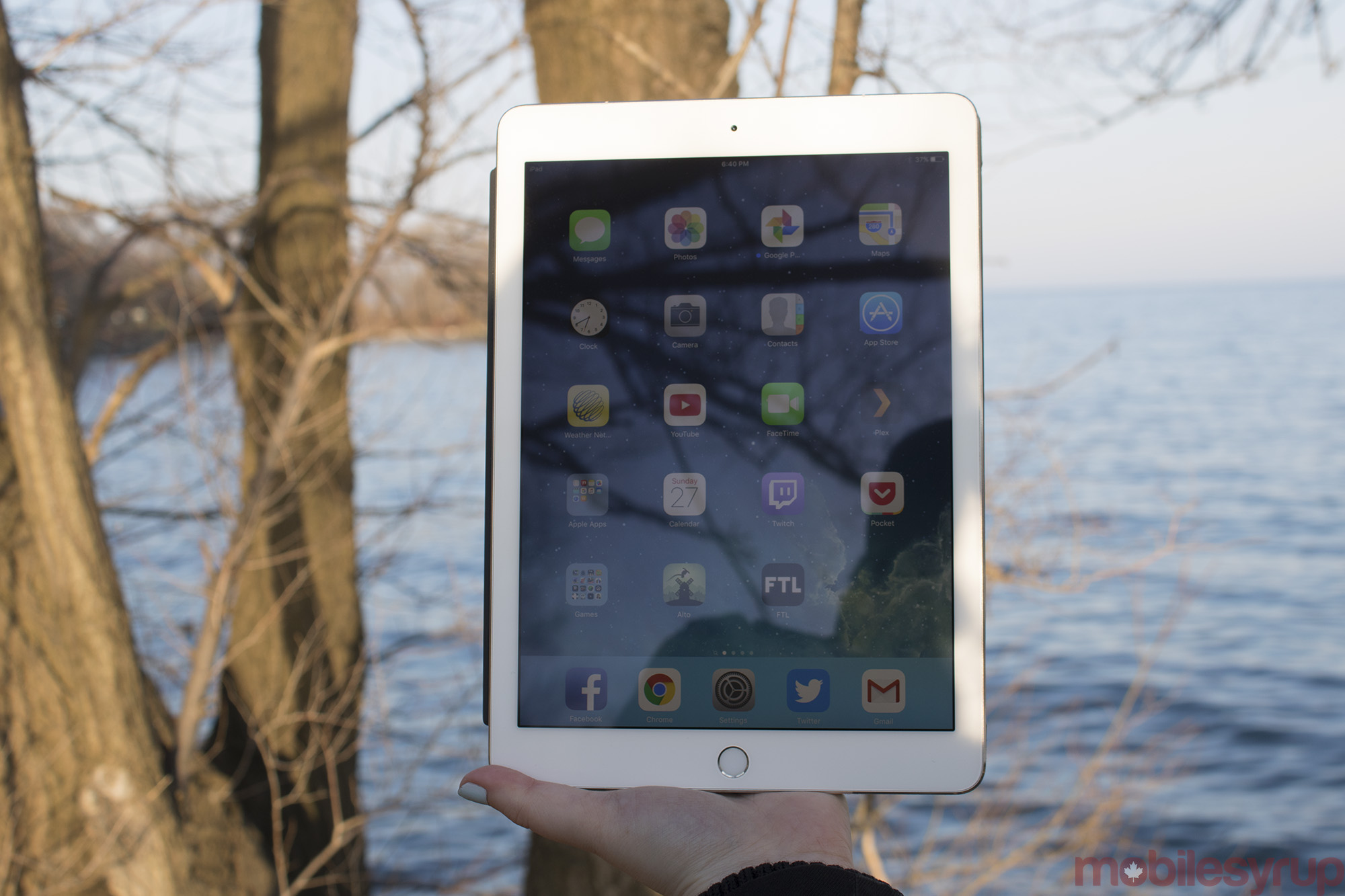 Editing simple Word documents, browsing the internet or creating a basic spreadsheet? Then the 9.7-inch iPad Pro, similar to its larger and more unwieldy 12.9-inch brother, is the perfect device for you. This is in part due to its more manageable size and Smart Keyboard/Apple Pencil compatibility. Microsoft’s support for iPad Pro-specific app when it comes to Office, is also an added bonus for those looking to work on basic enterprise activities.

For all other tasks, however, most people will likely find a standard laptop – or perhaps if their mind is set on a two-in-one hybrid, Microsoft’s Surface Pro 4 or Surface Book, which utilize a full-fledged version of Windows 10 – to suit their needs better. For me, using an iPad Pro as my daily work device is nearly impossible given the nature of my job. 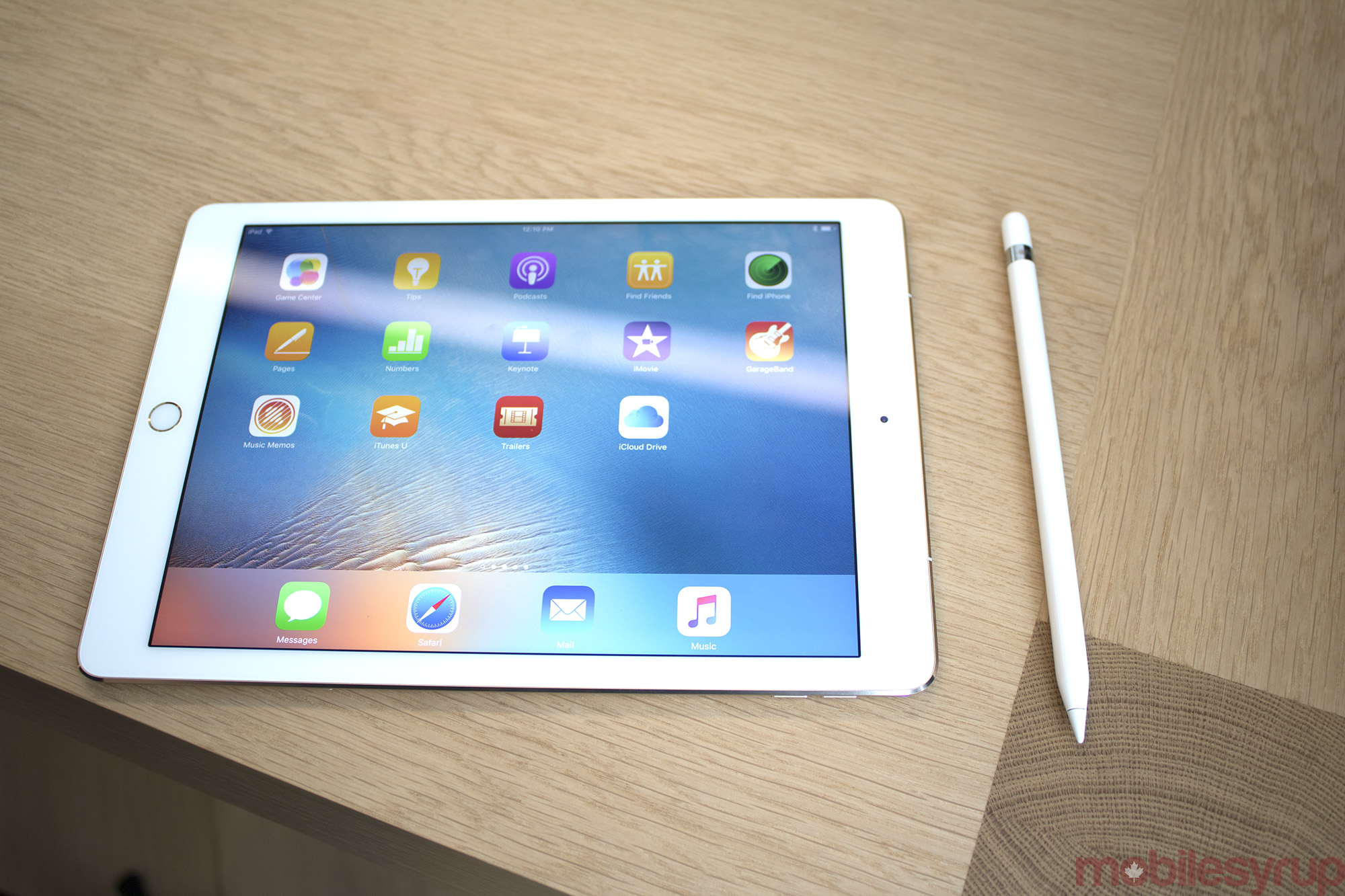 I often need a number of tabs open at one time and programs to run simultaneously. It’s worth noting that thanks to the power of iOS 9, the iPad is capable of basic multitasking, though having two apps open at once often isn’t enough for me.

I also frequently use Photoshop for resizing images and basic photography editing. While it’s true there are a number of mobile photo editing iOS apps available, many even from Adobe, I’ve never found any of them as functional as the standard desktop version of Photoshop.

Will it convince aging PC users to jump ship? 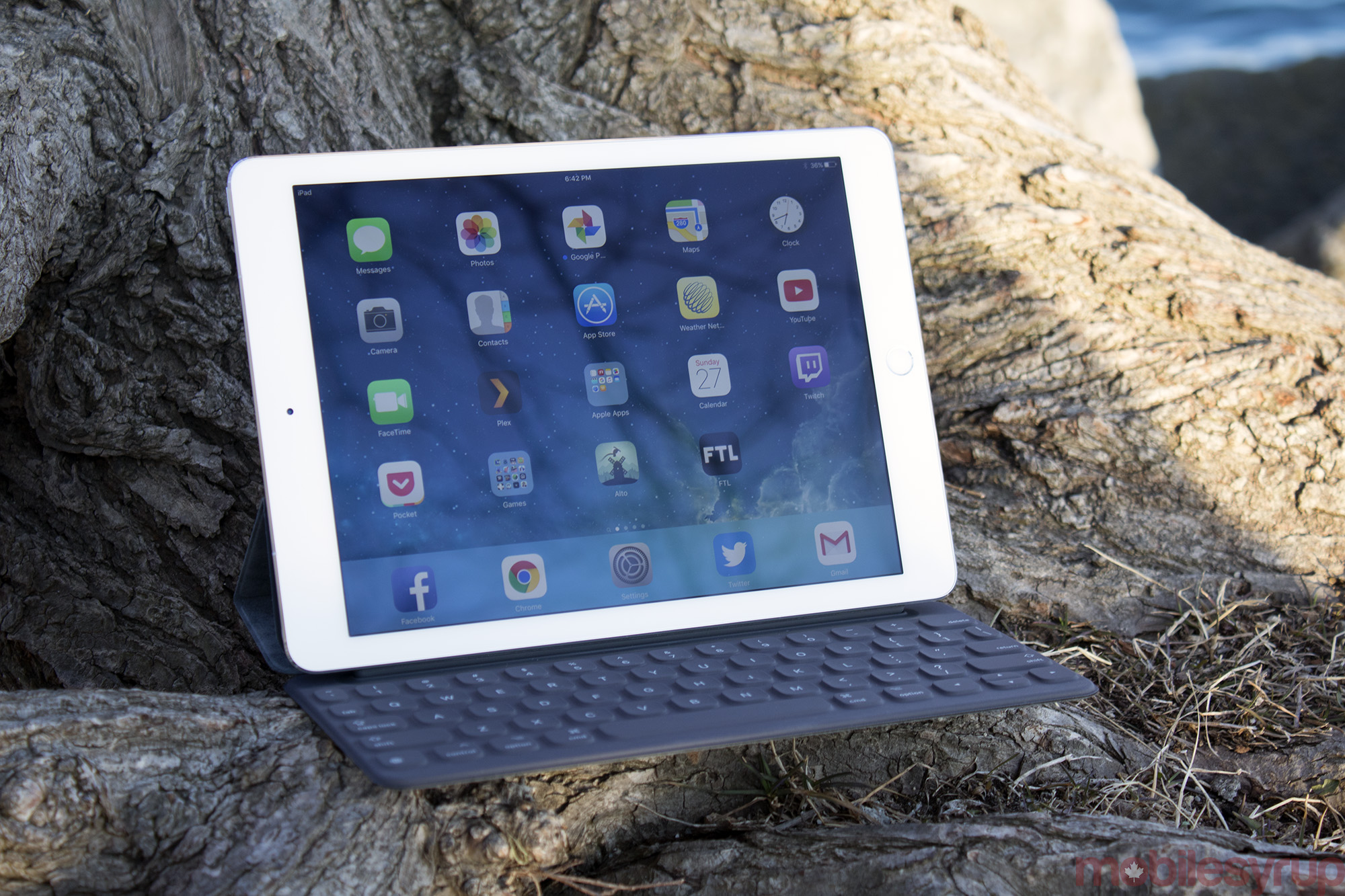 During the 9.7-inch Pro’s reveal press conference at the company’s Cupertino, California-based campus, Apple CEO Tim Cook stated there are nearly 600 million aging Windows PCs in the world that are more than five years old.

Cook cited the 9.7-inch iPad Pro as the perfect device for those looking to upgrade to modern hardware. While an ambitious statement, most PC users switching to an iPad Pro will find Apple’s mobile operating system limiting.

iOS is great at simplifying a number of basic tasks, but the operating system is far from a desktop replacement, whether the intention is to move from OS X, Windows 10, or even an earlier version of Windows, to using the iPad Pro. There’s also a substantial price difference between the Pro and a mid-range regular Windows laptop, especially with the addition of the sold-separately Smart Keyboard and Apple Pencil. 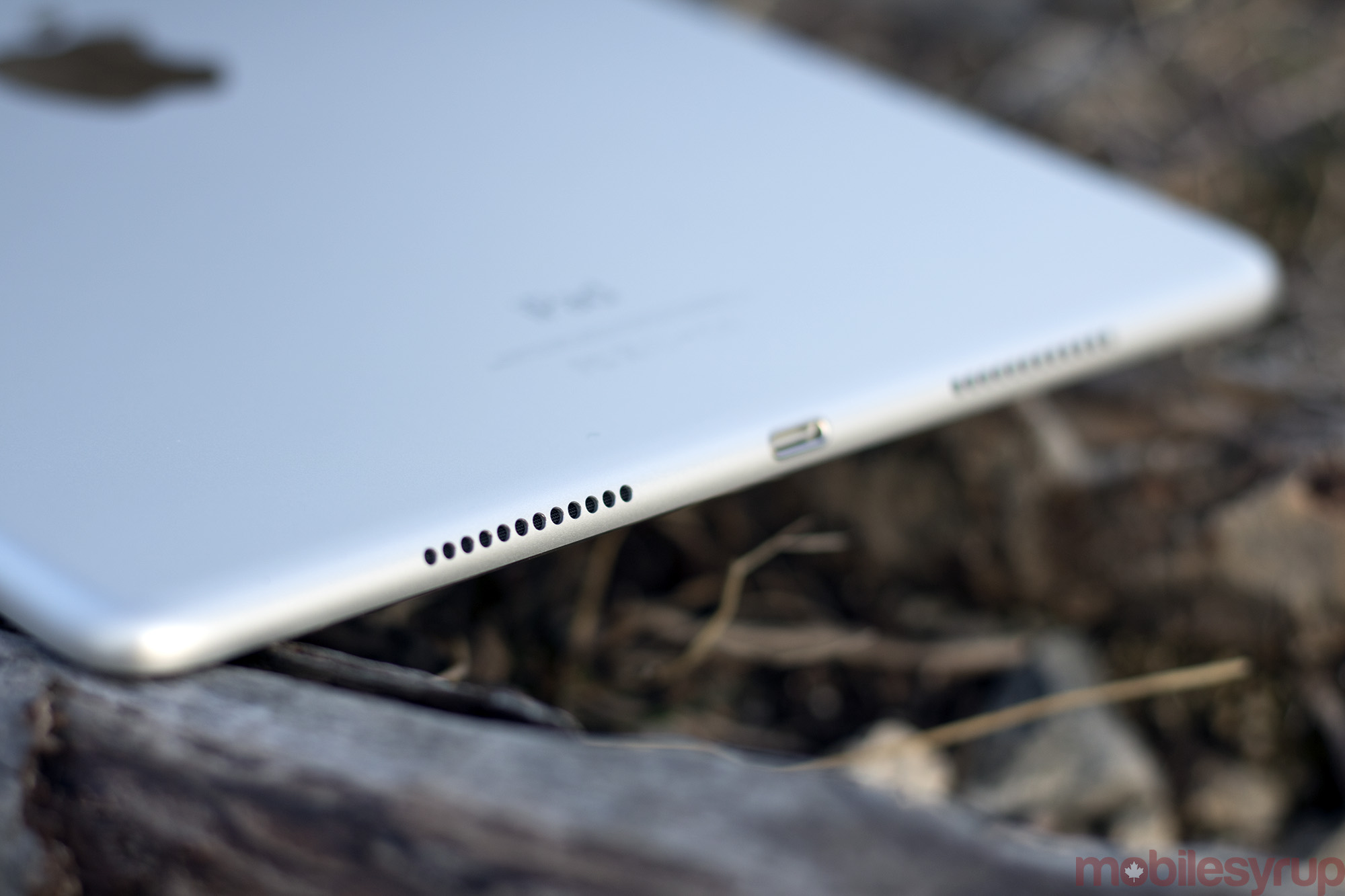 With all that said though, while preparing to write this review, I handed the 9.7-inch iPad Pro to a number of older family members who currently use some form of older Windows-based computer. With little instruction, most were able to accomplish simple tasks like checking their email, browsing the web and taking notes with the Smart Cover. Despite my skepticism regarding Cook’s bold claim, perhaps there is some truth to Apple’s ambitions.

Though, it is worth noting every person who tested out the 9.7-inch Pro felt that while the Apple Pencil made navigating the tablet’s more accurate, the accessory wasn’t necessary, stating that if they were to jump from their older Windows device to a Pro – and this is something some people said they’d consider – it’s unlikely they’d purchase the stylus. 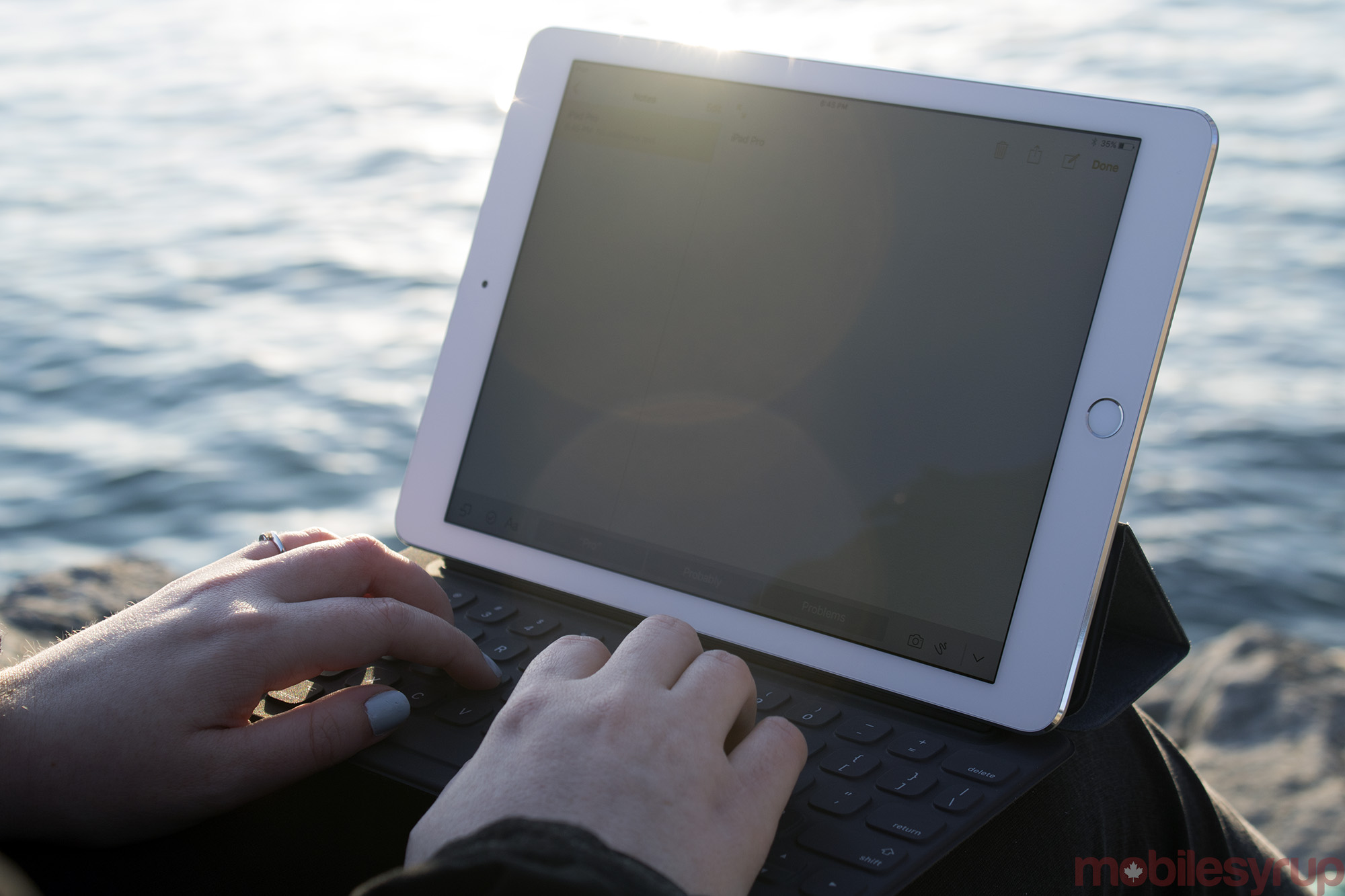 So now that we’ve covered the Pro’s strengths as well as its weaknesses, let’s delve into the actual tablet. It’s taken Apple roughly a year and a half to launch a successor to the iPad Air 2, and during this period, the company has managed to fit most of the 12.9-inch Pro’s upgrades into a smaller form factor (the 9.7-inch Pro features 2GB of RAM instead of 4GB), resulting in a worthy successor to one of the tech giant’s most well-received 9.7-inch tablets.

Just like the 12.9-inch Pro, its smaller 9.7-inch brother features four impressive stereo speakers on the side of its base that produce excellent sound, making listening to podcasts or watching YouTube videos a great experience (I rarely hooked the Pro up to my UE Boom Bluetooth speaker). The Apple Pencil, while not as sensitive as Microsoft’s Surface Stylus Digital Ink technology, is great for making simple sketches, taking notes and creating doodles. I’ve also found the Apple Pencil useful for playing specific video games that require accuracy — like FTL and Clash of Clans, for example.

The 9.7-inch Pro’s Smart Keyboard is efficient for inputting passwords and typing up quick notes, though its too small to be useful for extended periods of typing, and just like the 12.9-inch Pro, doesn’t balance well when being used on your lap. It’s also strange so few third-party manufacturers have taken advantage of the iPad Pro line’s magnetic Smart Connector. 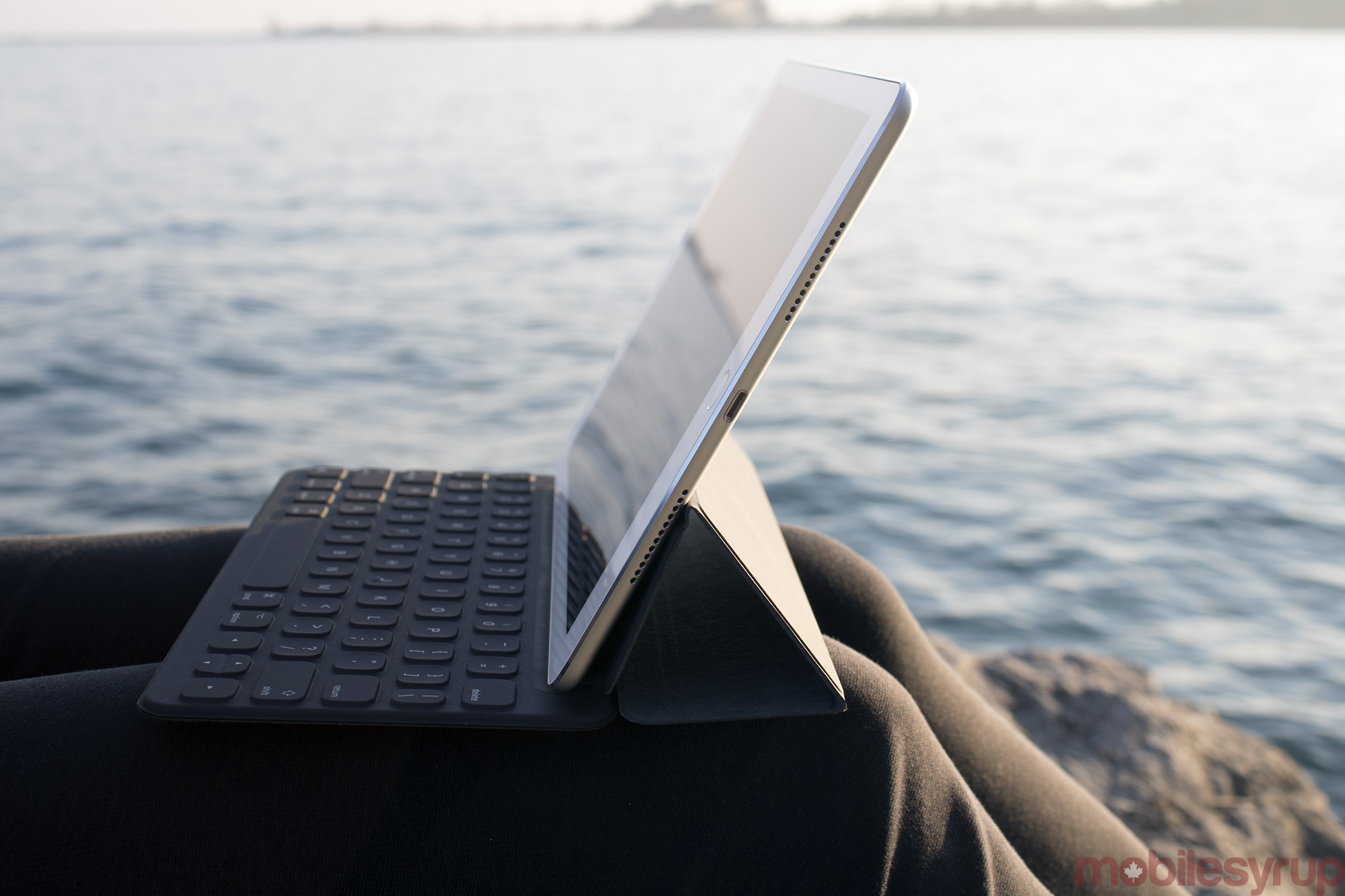 The only notable change between the 9.7-inch iPad Pro and the 12.9 inch edition, beyond its smaller form factor, as well as processor and camera upgrades, is its True Tone technology, a feature many poked fun at during Apple’s press conference that revealed the smaller pro and iPhone SE. In reality, True Tone actually makes a significant difference in display quality, though admittedly it’s difficult to notice the difference at first. True Tone adapts to the ambient light in the environment, subtly adjusting its white balance. The screen also displays a wider colour gamut thanks to its anti-reflective coated glass.

Then there’s the 9.7-inch Pro’s excellent 12 megapixel camera with 4K video shooting capabilities, matching the photography capabilities of the iPhone 6s. Despite what some might think – as well as how ridiculous it seems at times – a lot of people take pictures with the iPad. Seriously, go to your city’s local Zoo and I guarantee you’ll see at least one person snapping photos of a lion with an iPad. At least with the 9.7-inch Pro, their images won’t be horrendous. 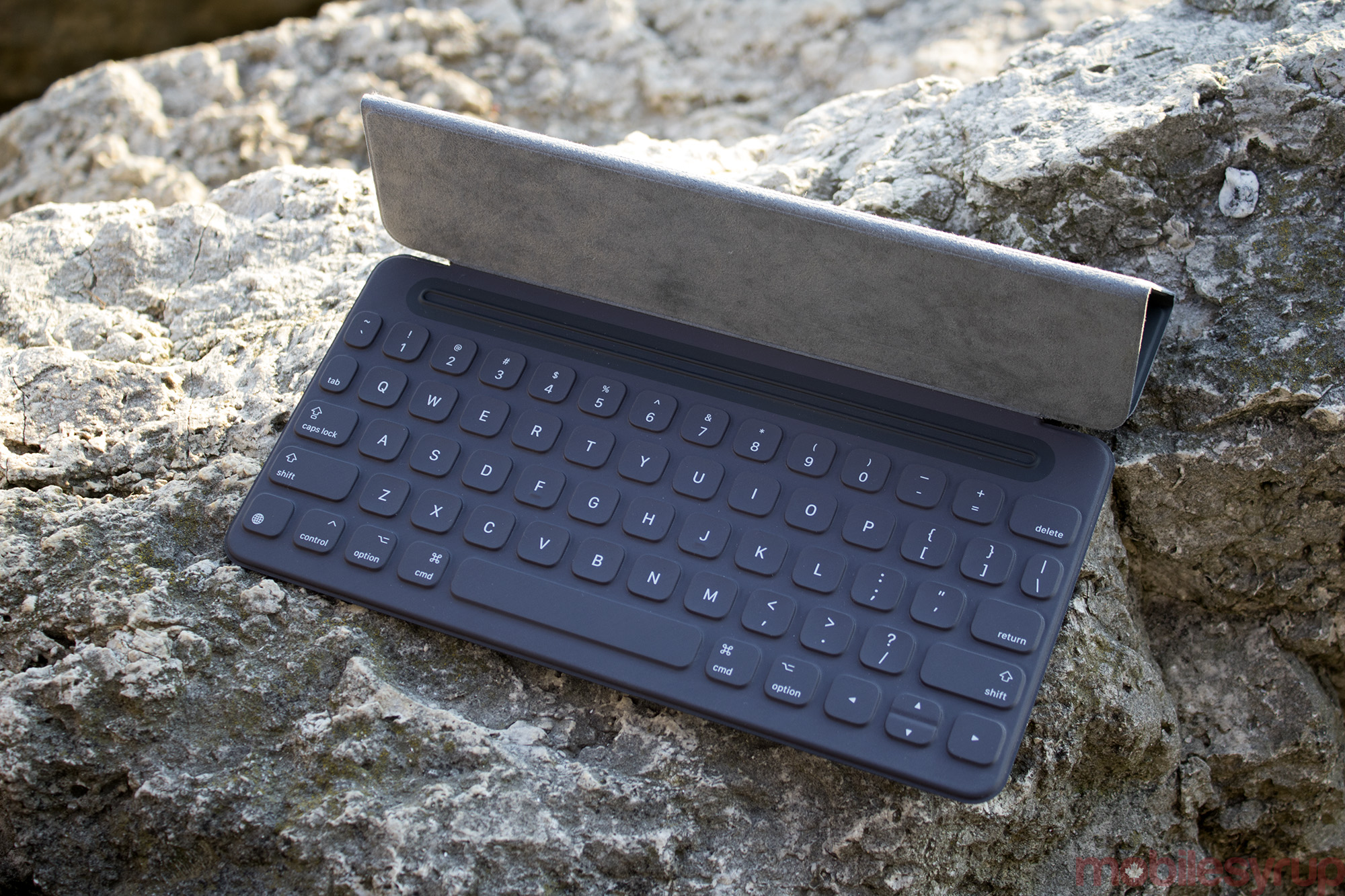 So if the 9.7-inch iPad Pro isn’t for Windows users looking to jump ship, or an alternative for those using OS X, then who is its target demographic? It’s those looking to upgrade from the iPad Air 2, or an even earlier iPad release.

The iPad Pro 9.7-inch’s display features the same resolution as the iPad Air 2, though it does offer a brighter and less reflective surface, as well as a wider colour gamut. The main improvement, however, is the inclusion of the A9X processor in the Pro, a significant jump from the A8X chip featured in the aging iPad Air 2. 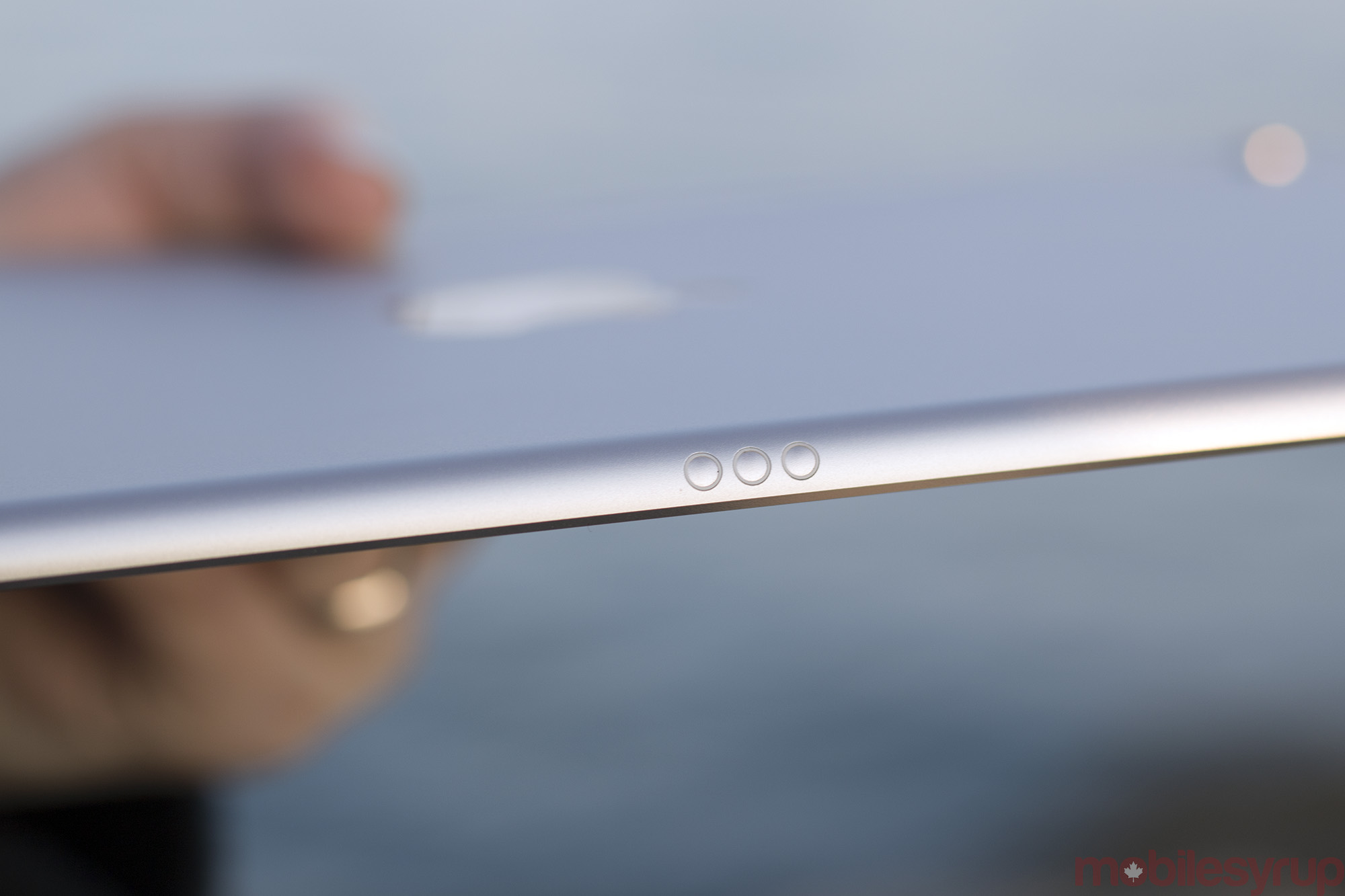 Whether or not the 9.7-inch iPad Pro is for you will depend on a variety of factors and what you’re actually looking for in a tablet. If you’re in the market for a new tablet the 9.7-inch iPad Pro, which starts at a pricey $799 CAD for the 32GB iteration, is a solid option. If you’re hoping to ditch your laptop, however, and use the Pro full-time, this definitely isn’t the device for you.