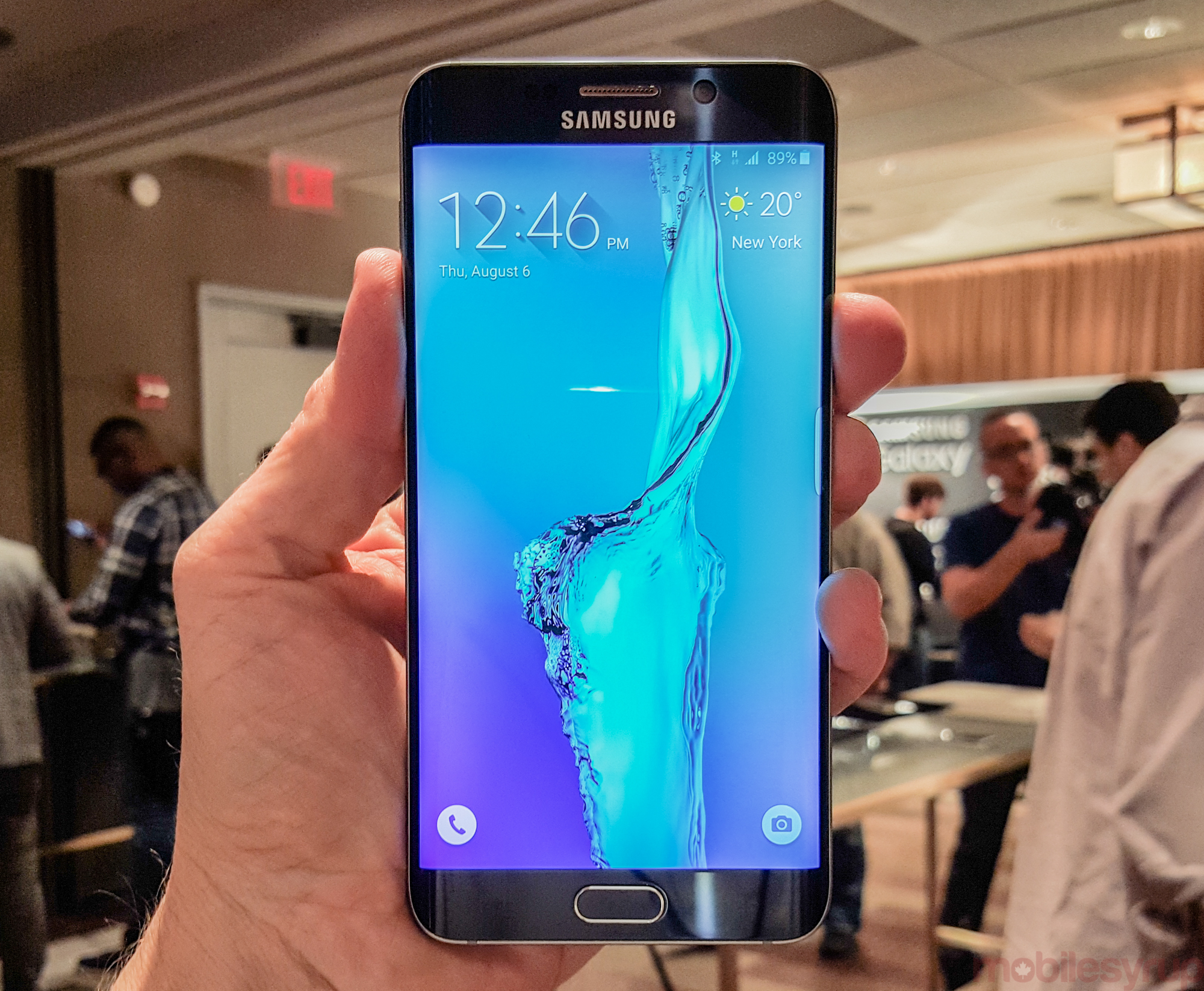 Building on the success of its most interesting — and most expensive — handset, the Samsung Galaxy S6 edge+, besides being a mouthful to say, is probably the company’s most evocative phone to date.

A 5.7-inch version of the sleek, dual-curved Galaxy S6 edge released in March, the “plus” comes in the form of that extra screen real estate, an extra gigabyte of memory, a larger battery, and a few software tweaks to take advantage of slightly more capacious curves. 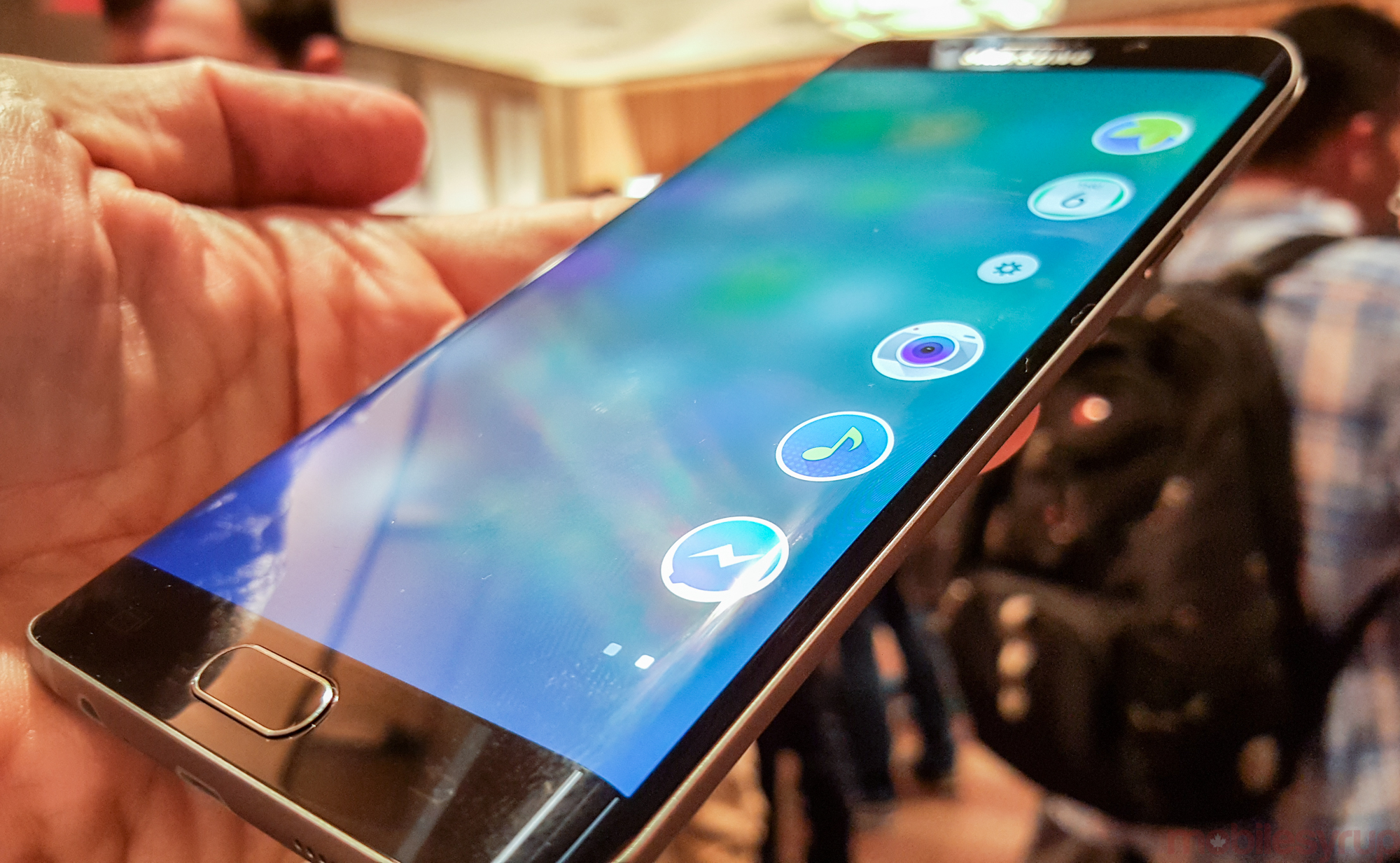 Like its smaller namesake, the S6 edge+ is made up of an aluminum frame with a glass front and back. The Android phone feels slimmer and narrower than its size would indicate, attributable to the fact that its Super AMOLED panel is framed with curved glass on either side. As a Samsung rep told us, people want bigger screens but not necessarily bigger phones, which is why a larger S6 edge is so appealing.

Internally, the device is largely unchanged: it has the same octa-core Exynos 7420 processor as the regular S6, though we’ve yet to see whether it is clocked higher. The extra gigabyte of RAM, now up to 4GB, is largely unnecessary at this point, though it may help to future-proof the device down the road.

Samsung hasn’t messed with a good thing in the storage options, either, though the 128GB version of the S6 edge has been nixed, since it probably didn’t sell in volume, and this device will fetch a premium even in the lower-storage tiers. The 32GB and 64GB versions will likely fetch a $100 premium over the equivalent Note 5 models. 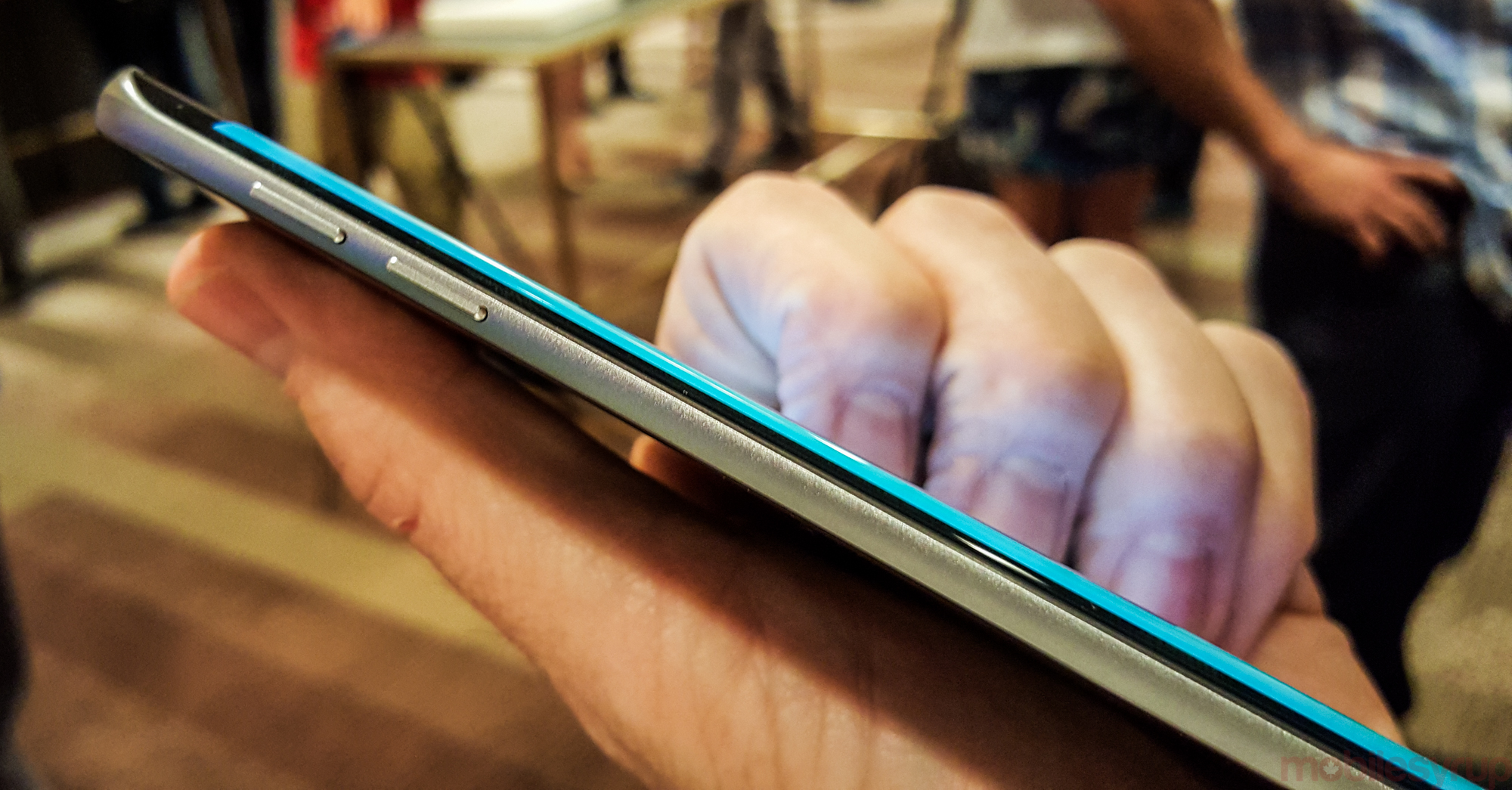 Similarly, the 16MP rear camera and F1.9 lens with optical image stabilization has made the trip to the larger model, as has the 5MP wide-angle front camera.

We noticed that the camera protrusion felt moderately less noticeable on the S6 edge+, owing to the more expansive frame. If it bothered you in the original, it may not here. 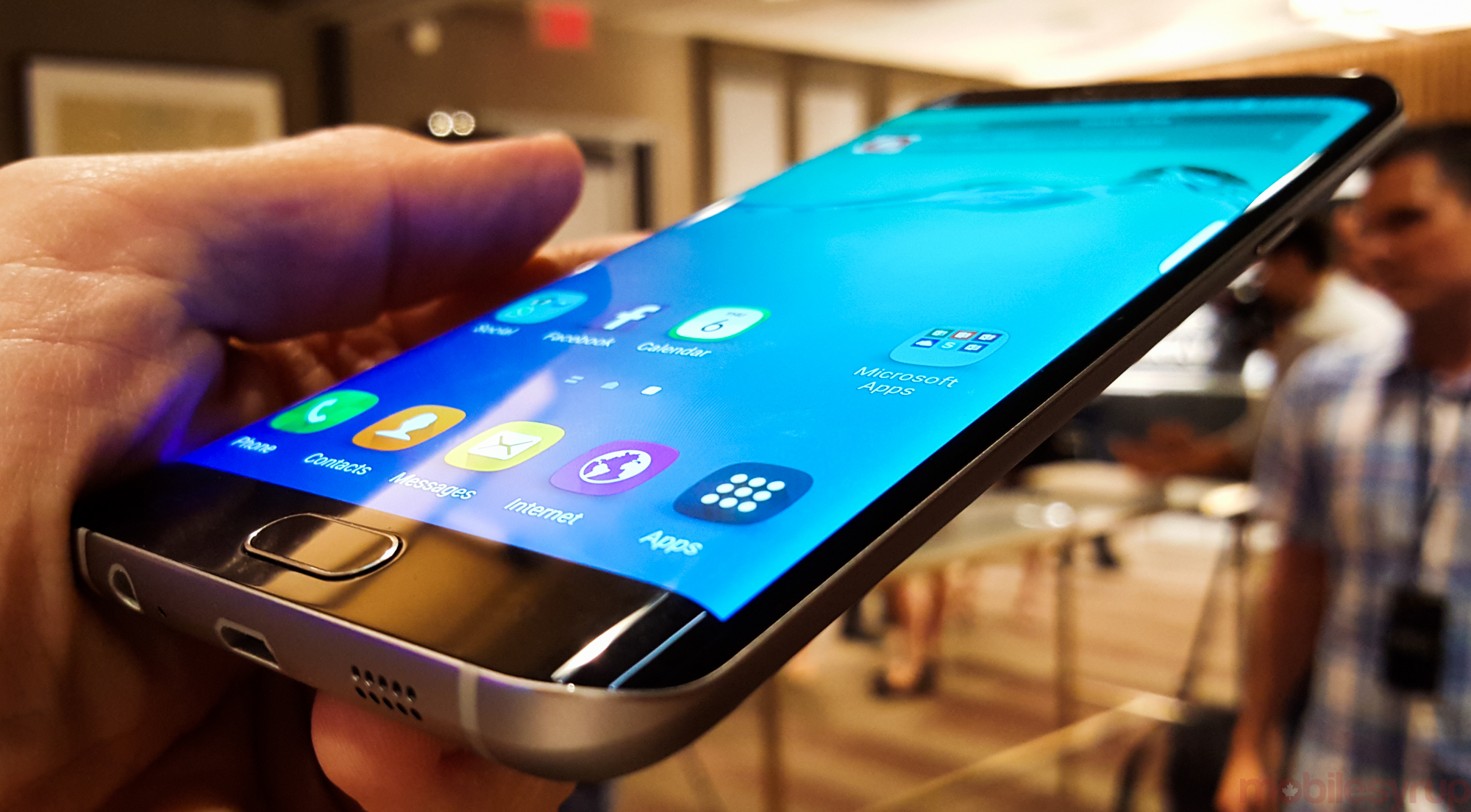 Perhaps the most significant improvement is in battery capacity, which has been increased 400mAh over the regular S6 edge to 3,000mAh. Considering the 5.7-inch display sports the same number of pixels, and may actually be more efficient due to more updated components, we’d venture to say that the S6 edge+ will last quite a bit longer.

At the very least, it charges faster than the S6 edge; Samsung said it has new wireless charging capabilities that supplies power at speeds of many competitors’ wired charging solutions. Improvements have also been made to the phone’s Fast Charging mechanism, too.

On the software side, things are pretty similar to what we’ve seen on the S6 edge. Running Android 5.1.1 out of the box, the phone’s Edge Screen has been slightly modified to allow for a second column. Now, in addition to loading one’s five favourite contacts, users can access shortcuts to their favourite apps – any app, not just Samsung’s pre-loaded ones – from anywhere in the system. It’s a pretty handy little improvement to a system that, in the original S6 edge, we thought was pretty under-utilized, especially coming from the Note Edge, which had a permanent pane dedicated to content and notifications. 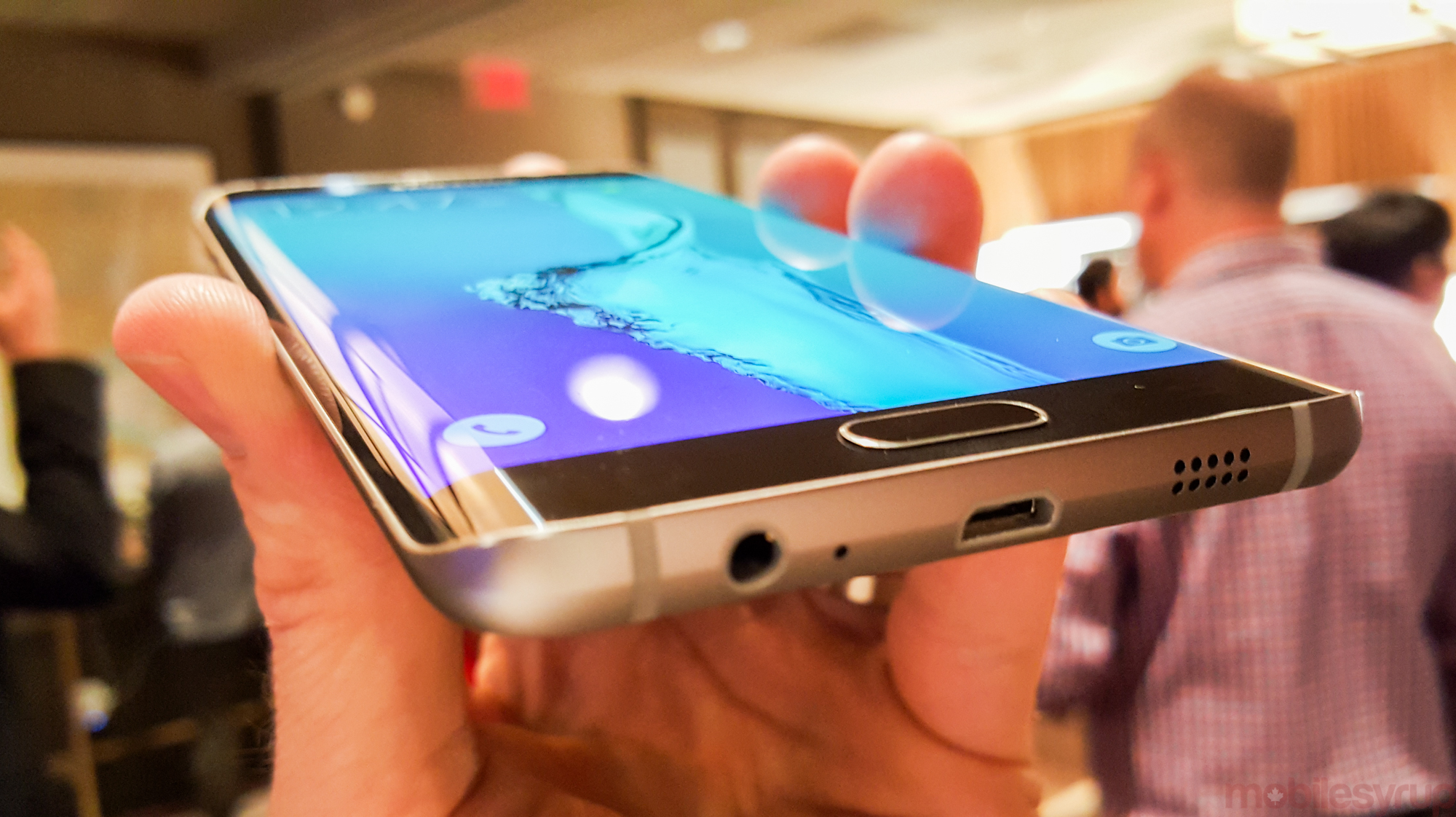 Like the Note 5, the S6 edge+ supports Samsung’s new Live Broadcast feature, which connects with YouTube to deliver exactly what it sounds, live streams over cellular or WiFi. The feature is tucked into the camera app, and isn’t particularly noteworthy, but it is another notch in Samsung’s belt.

The S6 edge’s fingerprint sensor has also returned, and will likely be a mainstay of Samsung’s flagships going forward. The company says it is the same technology as in the S6, and has been approved to work with Samsung Pay, which is launching in the U.S. later this year.

While there isn’t much difference between the S6 edge and its newer, larger sibling, there is something to be said about the extra real estate, especially when the device feels significantly smaller than other smartphones in its class. Samsung is using the entire animal here, slicing away and and all excess material, leaving a smooth carapace of smartphone in its wake.

Even a year after its introduction, the edge display feels useful and looks beautiful, even though it’s clear that Samsung needs to do more to differentiate its edge product besides mere aesthetics.

We’ll know whether it succeeded when the Galaxy S6 edge+ comes to Canada on August 21st. We’ll have carrier availability and pricing in a future article.