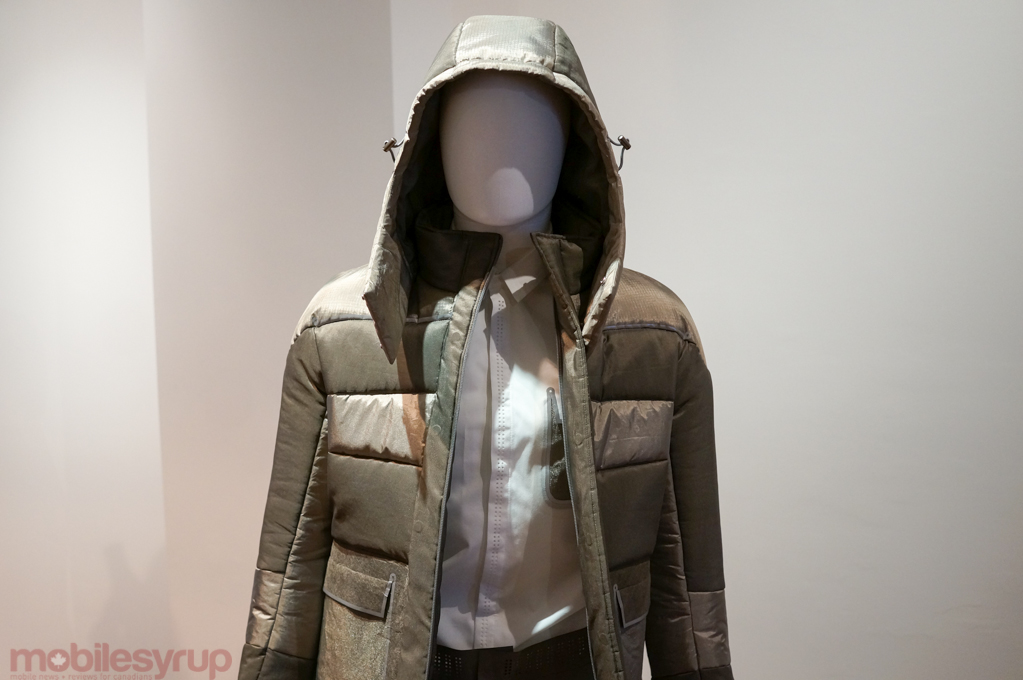 Focus: Life Gear is part art show, part marketing blitz for the Mondelēz International-owned brand, which is considered one of the most popular sugar-free gums in Canada. The show debuts shortly after Toronto Fashion Week, and is in town until April 6th, located in a small space at 536 Queen St West in Toronto.

The fashion line, made with breathable, lightweight materials, consists of a number of pieces that hews on the sporty side, with a minimalist earthen colour scheme and hidden seams. The radio frequency inhibition, made of a metal mesh “cage,” is built into the pockets, preventing signals from entering or leaving the area. The idea of disconnecting and focusing on the people we’re with and sights we’re seeing has been an increasingly public topic in the age of smartphones, and will only get worse with the proliferation of wearables.

“We wanted to start the conversation on focusing on what’s most important,” said Caroline Hugall, Senior Planner at Mondelēz. “People want more control over when their phone is available and when it’s not, and we wanted to create something that will help people do that.” What about just turning the phone off, or putting into airplane mode? “People feel guilty about being disconnected,” she said. “They don’t want the onus to be on them.”

The company has developed an app called Social Media Addict that plugs into Facebook to determine just how “distracted” people are these days. Measuring engagement across social media, the company is looking for award someone the dubious honour of Toronto’s Most Distracted Person.

Even if the social aspect sounds a bit suspect, the fashion line is interesting for a number of reasons. People tend to accept that public smartphone use is at best a welcome distraction and at worst a form of self-sabotage, but like many bad habits, for many it has turned into an addiction. Trident’s role in this project may be to promote its line of sugar-free gum, but the concept should be welcomed as a representation of the steps that we may need to take to feel less anxious about always being accessible to others.