Google is sold out of the Nexus 4 in Canada 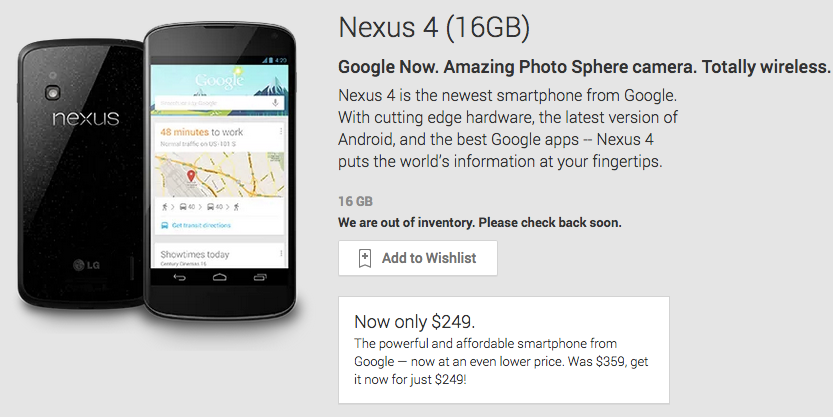 The Nexus 4 is now sold out in Canada.

While stock may be resupplied in the coming days, the depletion of both 8GB and 16GB inventory seems to indicate that Google is well on its way to releasing the rumoured Nexus 5, which we may or may not have seen in a leaked Google promo video.

What we do know is this: it will come with Android 4.4 KitKat (not Kit Kat) and have significantly improved specs over last year’s model. We’re hearing a 5-inch 1080p display, a Snapdragon 600 (or 800) processor, 2GB of RAM, a 13MP camera, wireless charging, a honking 3000mAh battery and cross-carrier LTE connectivity.

The Nexus 4 was announced on October 29th, 2012, so it stands to reason that Google will wait a little bit longer — perhaps until early next month — to announce a follow-up. We’re hearing conflicting rumours that both Motorola and LG are involved in the Nexus smartphone program, and that there may be more than one Nexus 5 model unveiled this year.

With the recent discounting of the core models, though, we wouldn’t be surprised if the device merely became too popular for its own good.