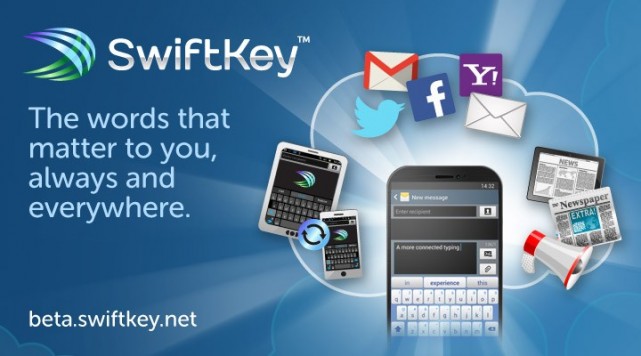 SwiftKey is a pillar of the Android ecosystem, considered one of the best third-party keyboards on the market. It’s extremely responsive and customizable, and incorporates an autocorrect mechanism that is practically unparalleled.

One complaint coming from the sidelines through all of its many updates and improvements has been lack of cloud syncing, namely the ability to back up dictionary components — one’s own words, slang, swears, proper names, etc. — to the company’s servers and have them be available immediately to new devices.

SwiftKey Cloud begins that process for the company, and does it in a seamless, Android-friendly way that does not require remembering passcodes or signing up for an account. It uses your existing Google login, the one you use to verify yourself on Android, to make the connection between devices and their server. All words you save to one device will be available on every other. Simple. While this has been available as a feature on Swype for some time, it’s implemented better here.

Another feature that SwiftKey cribbed from Swype is something called “Trending Phrases,” which its competitor calls “Living Language.” Essentially the same thing, it takes Twitter and other news sources and automatically adds the most common new words — ones that aren’t already in the dictionary — and makes them available for the user to connect.

Lastly, there’s better personalization, so SwiftKey can learn from your own writing, be it Twitter, Facebook, Gmail, Yahoo Mail, SMS and more.

The beta is open, so no more signing up to be a SwiftKey VIP (though you will need to be one to leave feedback). Other than these back-end changes, SwiftKey is largely the same keyboard you know and love. SwiftKey 4.2, with cloud sync, will be available, according to the company, as a free update when it’s out of beta.