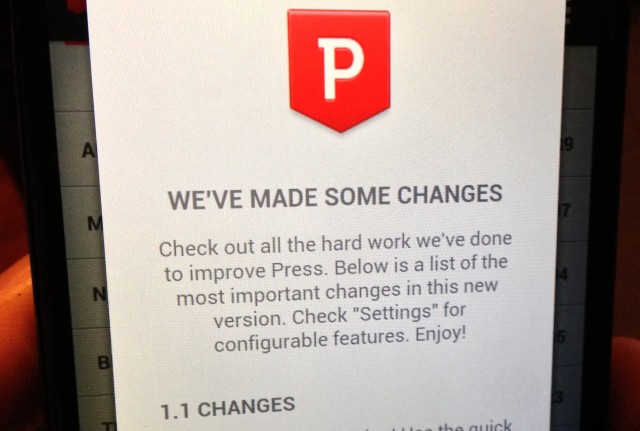 When we spoke to the two-person team behind Press for Android in December, they were unabashedly excited about version 1.0, but they seemed even more so for its follow-up. Version 1.1 addresses almost every problem and omission lodged against the app since its launch, and it now stands alone (in my opinion, at least) as the best Google Reader app for Android, by a long shot.

The main thing to know is that you can now schedule automatic updates behind the scenes, in intervals of 15, 30, 60, 120 and 600 minutes. You can also have the app automatically update your feeds whenever you re-enter, which is a great convenience when you’re just looking to catch up on what happened over the last few minutes.

The developers also added two easy ways to navigate between items, another omission of the 1.0 app. A small box with up and down arrows now appears at the bottom of your feed; you can tap on them to switch articles, or set up your volume keys to do the same. This dialog can be hidden and re-shown again with ease, and while it’s a little disappointing that you can’s swipe between articles, the architecture of the app doesn’t support it. Since you’re able to swipe right at any time to return to the main article list, it wouldn’t make sense to allow horizontal swipes to determine your place in the feed, so the arrow/volume button combo is your next best bet. I’d like to see vertical swipes used to navigate between feeds, but I’m sure the developers had their reasons for not implementing it in this way.

Improvements have been made elsewhere in the app, so it’s meaner and leaner than before. If you haven’t picked up Press for Android yet, do yourself a favour.