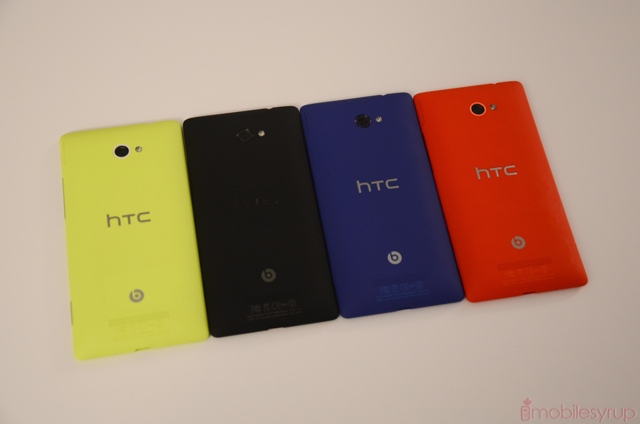 Mike Woodward looks tired. The new President of HTC North America is experiencing another in, I’m sure, a series of long days. I’m in a small room second-floor room somewhere on 37th St in New York City. It’s cold and crisp outside, an initial flirtation with Fall.

There are eight phones in front of me, a contagiously happy parade of colour in symmetrical opposities. Two hours earlier, HTC’s CEO Peter Chou emerged on stage to a befuddled crowd, unsure of what was in store. He opined of the company’s 15-year relationship with Microsoft, of how HTC has sold more Windows Phones than any other company. A trim, tentative Steve Ballmer spoke swiftly about how excited he was for HTC to be a premier Windows Phone 8 launch partner. He called HTC’s newest Windows Phones “signature devices.” Nokia’s presence loomed like an elephant the entire time.

But when we saw the phones, adhered to metal stands like so many perched birds, they were indeed beautiful. The strangeness of the event waned as we drank Diet Coke from expensive tumblers and allowed Microsoft employees to show us glimpses of the operating system that both Nokia and HTC will use to compete against Apple, and each other. That we haven’t seen the very software that will power these phones is unprecedented in the industry; five phones have now been announced with Windows Phone 8 — Samsung’s ATIV S; Nokia’s Lumia 820 and 920; HTC’s 8X and 8S — and the picture of the software is still unclear.

We know that there will be a new home screen, with live tiles of three customizable sizes. This is the first fact flung at us in the name of differentiation; it’s the most easily-explained evolution from Windows Phone 7. We know of a new NFC-enabled Wallet feature, though how it will affect our daily lives is unclear, especially for those outside the United States. We are excited about faster processors, improved graphics abilities, improved camera speed. We know all these things, and yet we know nothing at all.

Woodward smiles at me. I just asked him about whether the 8X and 8S were products of a design language that began with the One series. It’s an easy question and we both know it. I just want to get him talking about Android, about why HTC is here today. Having only been the President of the company since July, he was working as Vice President of Devices at AT&T when the One X was launched. He knows all about the difficult year HTC has had, how, despite a fantastic hero product, the company lowered its revenue guidance in the last two quarters, and barely squeaked by with a profit. This despite the most solid product line it’s ever had: the One X, One S and One V are, even months later, contenders for the top Android devices in their respective price ranges.

So why the change in fortunes? Three words: Apple and Samsung. While HTC is still a venerable outfit and a (scantly) profitable company, its brand has been somewhat tarnished by being overshadowed; in the Android space by Samsung — “One of the biggest companies in the world,” says Woodward as a qualifier — and Apple, “the most valuable company in the world,” he continues. HTC, he says, is a smartphone company first, and it does the best job at marrying hardware design with the software it opts to use. In the case of Android, Sense UI has always been a step ahead of its competitors in terms of usability, though until this latest version it was hampered by speed and bloat issues. Sense 4.0, which debuted in the One series, is a pared-down and beautiful example of what an OEM can accomplish with Android. It’s still, in my opinion, second best only to Motorola’s latest close-to-stock experience.

And now, Windows Phone 8. “We want to be both a leader in Android and Windows Phone,” says Woodward. I am his last interview of the day, and he seems as close to irritable as an executive can be under these stress-free circumstances. I ask him whether he’s worried Nokia will overshadow HTC when it comes to exclusive apps. He scrunches his face for a moment, obviously perturbed by the insinuation that his company would ever be at a disadvantage. His denial is flecked with abstruse extrapolations of how Microsoft makes Windows Phone the same for all manufacturers. I boil the point down: will HTC be building its own first-party apps to counter Nokia’s location services such as Drive, Maps, Transit, City Lens, Camera Extras and Cinemagraph? He points to examples already seen in Windows Phone 7 such as Photo Enhancer, Flashlight, the Weather Hub. There is tentative assurance that the experience will be identical throughout the Windows Phone 8 ecosystem. He reiterates Microsoft’s trust in HTC and its excitement at working so closely with its longest-standing OEM relationship. There is smugness, a sense of lackadaisical assuredness. I move on.

“We focused on three things in the One series: great camera, authentic sound, amazing design,” he says. I am looking at the eight phones in front of me, taking turns holding them in my hands. The 8X feels like a masterful project, a perfectly-weighted conflation of outstanding materials and pristine thought. I wonder if the various high-end Windows Phone 8 models such as the 8X, Luima 920 and ATIV S are going to be too similar to really differentiate themselves in the market. There’s no question that the 8X is gorgeous, colourful and likely well integrated with the yet-unseen software. More importantly, HTC is committing itself again to Microsoft in a very real way.

I look to the 8S now, hold the Domino model in my hand. It is gorgeous, a true fashion miracle. But it’s also a much less powerful device than the unibody 8X, and will likely not appeal to “flagship” buyers. It’s a shame, because at 4-inches it may be the perfect size for a lot of potential users. I want to ask about why they opted for two models instead of three, but my time with Woodward is waning and I want to talk more about the future.

“The other companies are behemoths,” he sighs. “They use brute force marketing to get what they want.” I asked him how this two-pronged approach to the market — potentially updating its Android line in the spring, and Windows Phone in the fall — will help gain HTC a foothold in the extremely competitive smartphone market. “But we have a competitive advantage: we won’t skimp on design. Those people you saw today,” referring to a short clip of HTC’s Seattle design studio, “are real people working long hours to achieve the impossible.” It’s pure marketing speak from a guy who’s sold the idea of phones to guys like me for years.

Microsoft needs HTC, this is clear. The company has overstated the importance of Nokia in the resurgence of Windows Phone, as both companies have become a calamity of brand recognition in North America. The dearth of Lumias sold last quarter drives home the need for diversity in the Windows Phone space, a reality festooned with the dried scraps of legacy Mango devices. By partnering with multiple well-known, profitable companies to push Windows Phone 8, Microsoft spreads its pressure points and significantly minimizes its chance of failure. Many pundits thought that HTC and Samsung would be reluctant characters in the Nokia + Microsoft love affair, and with the announcement of the 8X and 8S this is clearly no longer true.

HTC is very confident of the 8X’s success. Woodward implies it is all-but assured: the ImageSense camera on the back takes better photos in low light; the 2.1MP front camera has a wide-angle lens for better Skyping; the Super LCD2 display is sharper and richer than any other on the market; its Beats integration, a first for Windows Phone, boosted by a 2.5V internal amplifier, twice the strength of the average phone. On the surface, the 8X is but another smartphone richly manicured by the hype machine. But there is a confidence and a gracefulness in HTC’s movements, its penchant for exquisite design, that almost assures its future success.

For a company reasserting itself as a dominant player, Woodward has reason to be tired. He, and his company, have been running at full speed.