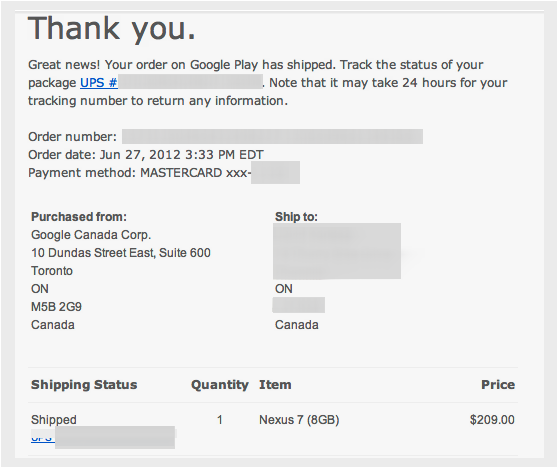 Eager Canadians who pre-ordered Google’s Nexus 7 were were quick to drop their cash to be the first to score the Jelly Bean tablet. However, frustration set in over the weekend as many Canadian retailers started to sell inventory, with some even declaring stock immediately “sold out.”

Today it seems that the tides have turned and those Canadians pre-ordered have received a shipping confirmation from Google that the Nexus 7 is en route. In addition, a note on Google’s support forum says that “We’re now shipping Nexus 7 preorders. All US and Australia preorders are scheduled to ship by July 17th. UK and Canada preorders have also begun shipping in waves.” Now it’s waiting time until you get the Nexus 7 into your hands.

Anyone else receive a confirmation email?
(Thanks David, Shawn Benjamin, Lisa, Parker, Trevor!)